Where do Everton go from here? The feeling you get just from being inside Goodison Park is that the fans are craving a rebuild, not just in terms of their plans for a new stadium, or desire for new signings, but also of the way their club is run

Steve Walsh’s appointment as Director of Football in 2016 hasn’t gone as planned, and though there may have been some good signings, the club appear to be suffering from a disconnect between recruitment and coaching/management, which is always a recipe for disaster.

It’s not quite been disastrous, as the club brought Sam Allardyce in to steady the ship with a relegation scrap looming, but although the Englishman has taken them to safety and into the top half of the table, Toffees fans aren’t convinced he’s the man to take them any further forward.

The club have also been in talks with PSV Director of Football Marcel Brands, and the Dutchman is rumoured to be joining once his current side have secured the Eredivisie title.

“Everton have only spoken to Marcel, and he's informed us about this. It is not done yet. His feeling must be one hundred percent good. The fact that he has had a conversation with them does indicate that he is considering it.”

Maybe he’s already beginning to advise the club in the background, as they are linked with Hannover 96 midfielder Marvin Bakalorz.

Hannover are one of a number of sides battling it out in a crowded region of the Bundesliga table where just ten points separate eighth and 14th, with a total of 15 points left to play for.

Bakalorz has been a part of this battle, starting 19 of the 29 Bundesliga games his side have played.

He’s operated primarily in the centre of midfield, often as part of a double pivot in front of a back three or a back four. 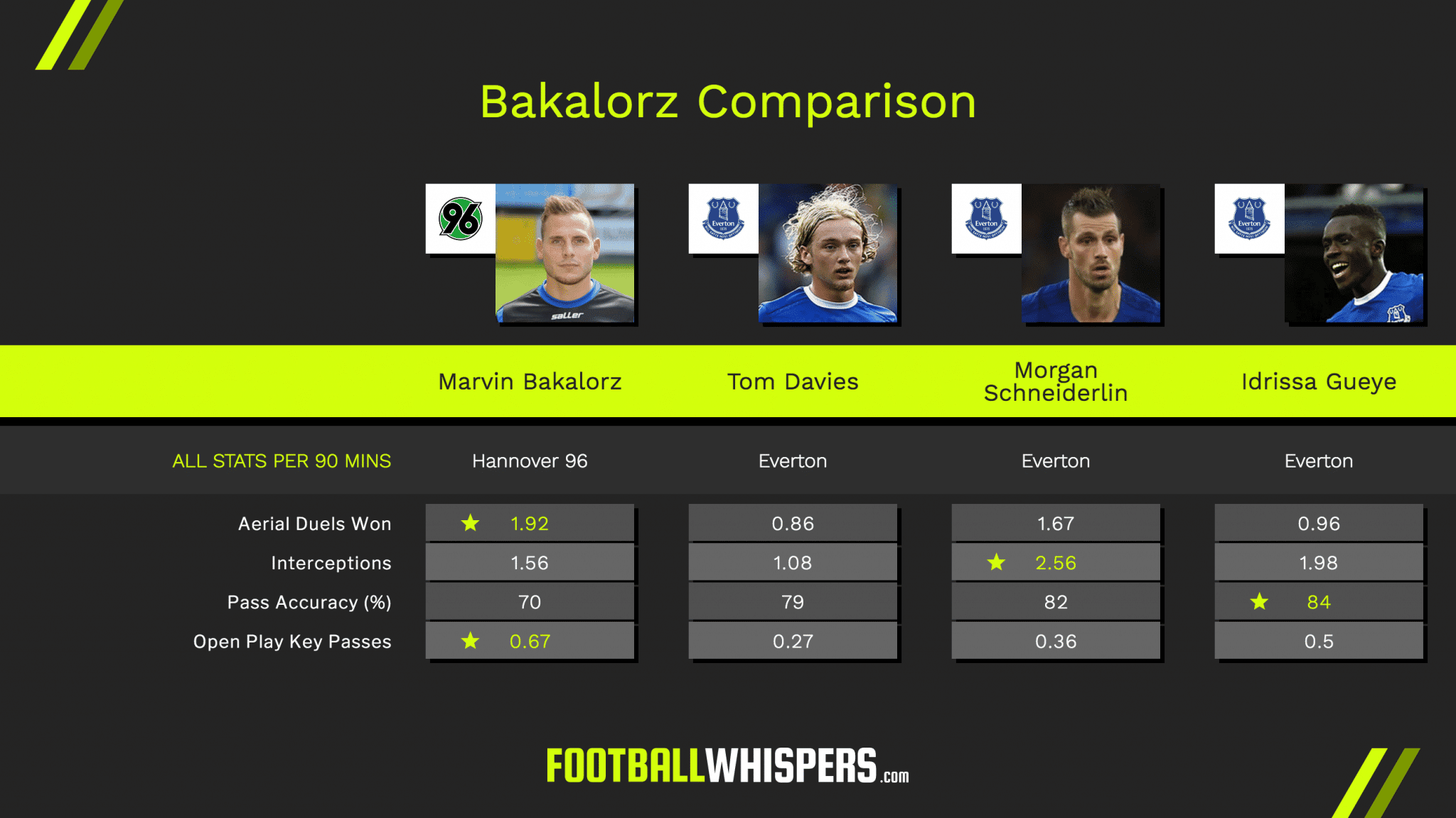 Statistically, the German isn’t necessarily an improvement on any of Everton’s current starters, but there are hints when watching him that he may fit well into an Everton midfield which struggles to click as a unit.

Though it is difficult to compare between league and styles, the players who would give the best comparison are Tom Davies, Idrissa Gueye and Morgan Schneiderlin. Bakalorz is a mixture of the three in terms of style and role, though he isn’t necessarily the best parts of the trio lumped together.

One area which he has the edge is aerial duels, winning 1.92 per 90 minutes compared to the best of Everton’s three, Schneiderlin, who wins 1.67.

In terms of interceptions he makes 1.56 per 90, compared to Schneiderlin who is Everton’s best player in this area, making 2.56.

His passing stats aren’t particularly impressive for a player in his position, with just 70 per cent of his passes finding their target. The worst in this category from the Toffees’ current crop is Davies on 79 per cent, but this could be due to his more advanced position in the midfield.

Bakalorz does lead the bunch in open play key passes per 90’, and watching him play he does seem to have an eye for a quick forward pass with his head or either foot.

If Everton want to progress beyond their current level the Hannover man will be a water carrier rather than a difference maker, but these types of players are still needed to keep a side and a squad ticking over.

They may have originally spotted him during the previous season, where his breaking up of opposition play in midfield was key in getting Hannover promoted to the German top flight.

The 28-year-old has been linked with a move to Championship side Leeds which, as a second tier club themselves, may be considered as more suited to his level of ability.

But if the recruitment team at Everton, whoever they currently are, have seen a specific set of skills which Bakalorz can bring to the side, then he could have a limited but effective role in the first team squad.

If he can gel together a group of existing players who are yet to show the talents they displayed before arriving on Merseyside, then he would be a very useful signing indeed.

It’s very much a case of watch this space for Everton at the moment, and this transfer rumour is no different.