The Bundesliga could claim yet another English youngster. Schalke are looking to keep on-loan Everton full-back Jonjoe Kenny beyond this season having been impressed with the 22-year-old during his loan spell Gelsenkirchen.

Jochen Schneider, the head of sport of the Bundesliga side, told German outlet Sport Bild that he is hopeful of extending Kenny’s stay at the Veltins-Arena.

He said: “We’re happy that we have him, not only as a player but as a person he suits Schalke. I hope we will have the chance to keep him longer.”

The defender hasn't ruled out remaining in Germany either, although he has admitted it's too soon to predict where his future may lie.

“It's too early for that decision. I don't want to live in the future. Whatever happens, happens. Now I'm definitely giving everything for Schalke,” he told Bundesliga.com.

“Schalke is still a huge club. The club has played regularly in Europe, and has a large following. People know Schalke from the Champions League, it's a world club. Now we're concentrating on the league and want to take the next steps.”

The Toffees signed off on loaning the England Under-21 international to Schalke safe in the knowledge that a season in the Bundesliga would give him ample opportunity to rack up valuable first-team minutes.

Behind Seamus Coleman in the pecking order at Goodison Park, Everton covered Kenny's departure by bringing in Monaco full-back Djibril Sidibé on loan.

There is an option to buy in the deal – the fee hasn't been made public – yet Sidibé hasn't had many opportunities this season, appearing in just 211 Premier League minutes.

However, his stats are worth noting. Firstly, he's creating close to 0.5 big chances per 90. Comfortably more than both Coleman and Kenny combined. The 27-year-old Frenchman is also completing more crosses and his expected goals assisted per 90 average is on par with his captain's (0.07)

Before reading too much into these numbers, it is worth reiterating the fact the sample size isn't the largest. However, if he manages to post similar stats throughout the season, why would Everton pass up the opportunity to sign a World Cup winner for what could be a bargain price?

The simple answer is because of Kenny. 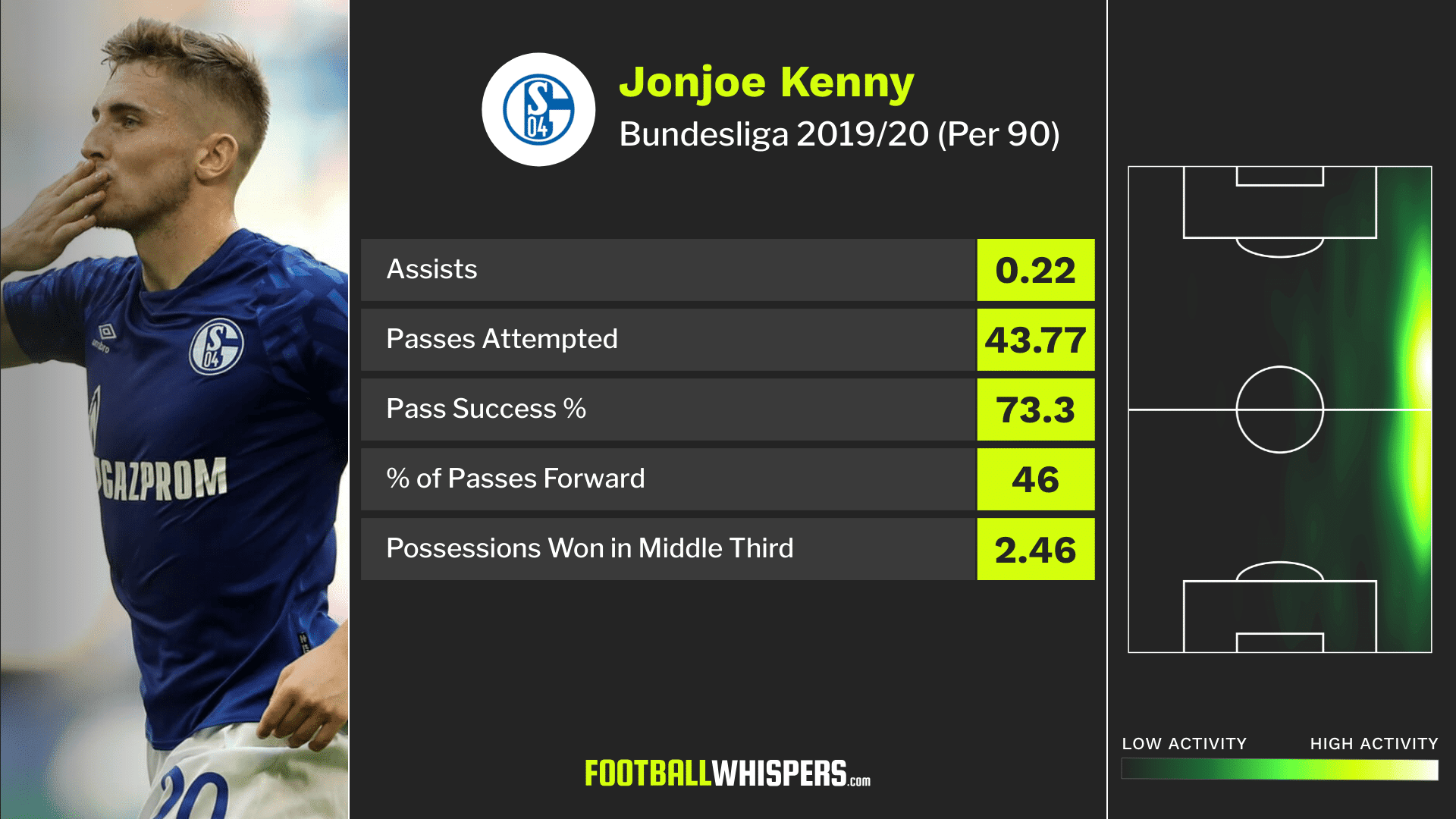 He's been one of Schalke's most consistent performers under new manager David Wagner and as far as auditions to eventually succeed Coleman go, his couldn't have gone any better.

Not only is he making marauding runs down the right-hand flank, as highlighted by his heat map above, but Kenny is also showing he can be progressive when in possession.

Of the 43.77 passes attempted per 90, 46 per cent of them are going forward. He's not sterile or safe in possession like some full-backs often are, he's perfect for a team looking play out from defence.

His pass success rate, finding a team-mate 73 per cent of the time, might worry some but it's expected from such a risk-taking full-back. Kenny has chipped in with 0.22 assists per 90 already this term too, although his expected assists average is 0.07.

However, perhaps the biggest positive from these select few stats is the possessions won in the middle third one.

It shows that he's an aggressive, confident right-back who will involve himself in play higher up the pitch. The average of 2.46 is higher than Coleman's average (2.16), but the Toffees captain does win possession back more times in the defensive third.

That alone tells a story, however. With the Everton No.23 tending to do more of his individual work defensively while Kenny turns what should be a defensive action into an attacking one by winning the ball higher up the pitch.

Marco Silva has no reason not to give Kenny a chance in the first-team if he is looking for a long-term successor to Coleman. It's a low-risk decision with huge rewards all-round if it pays off, for both club and player.