Towards the end of May, reports emerged that Arsenal had begun talks to sign KAS Eupen forward, Henry Onyekuru. Still only 19-years-old, the Nigerian has been on the radar of quite a few clubs for some time, but the Gunners have made the first move for Juplier Pro League based goal-scorer.

Sky Sports News reported that Everton, Southampton and West Brom were also interested, suggesting that sources close to the player admitted that the attacker would move to the Premier League this summer.

However, the Daily Mail revealed that it was the Toffees who had secured the signature of the highly-rated forward. He will be loaned out to Belgian giants Anderlecht for a season for work permit purposes.

Football Whispers understands that those English clubs nearly missed out during the January window as Scottish champions Celtic were extremely close to finalising a deal for the teenager.

Apparently available for less than €8million, it seems that the Glasgow club pulled the plug on a winter transfer at the very last moment. An undisclosed fee had been agreed with Eupen for their star player, plus Celtic had agreed terms with the player, but with everything looking close, we understand that Brendan Rodgers pulled the plug.

Due to the large transfer fee, something that wouldn’t be a problem for an English club, he was worried that it would put pressure on his shoulders to give the new signing more minutes, rather than using Scott Sinclair.

The former Manchester City winger sits high in the former Liverpool manager’s plans, that he decided to end the deal and stick with the 28-year-old.

It obviously paid off and the forward finished the Premiership campaign with 21 goals and eight assists in 35 appearances.

Only time will tell if the Bhoys will rue the chance to sign Onyekuru when they had the chance, with teams with bigger budgets now involved.

Who is Henry Onyekuru?

Born in Onitsha, Nigeria, the 19-year-old came through the Aspire academy in Senegal before signing for Eupen in 2015.

Playing off the left-wing, Onyekuru has exploded into life this season and in all competitions, he’s found the net 24 times in 41 games. That level of return has led to the Nigerian admitting he will be on the move.

“I have made my decision to leave. I have already agreed with Eupen that I am joining my new club after this season.”

What would Onyekuru add to the Premier League?

Straight away, you can’t help but notice Onyekuru’s blistering pace.

He likes to drift wide left, then cut inside, leaving defenders for dead as he steams through the middle. He’s been compared to a younger Thierry Henry, pre-Arsenal days.

There are also Yannick Bolasie – but with an end product – comparisons thrown in there too.

Against Mouscron, even with just 18 minutes of the game remaining, he had the pace, control and drive to take on their entire back-line. 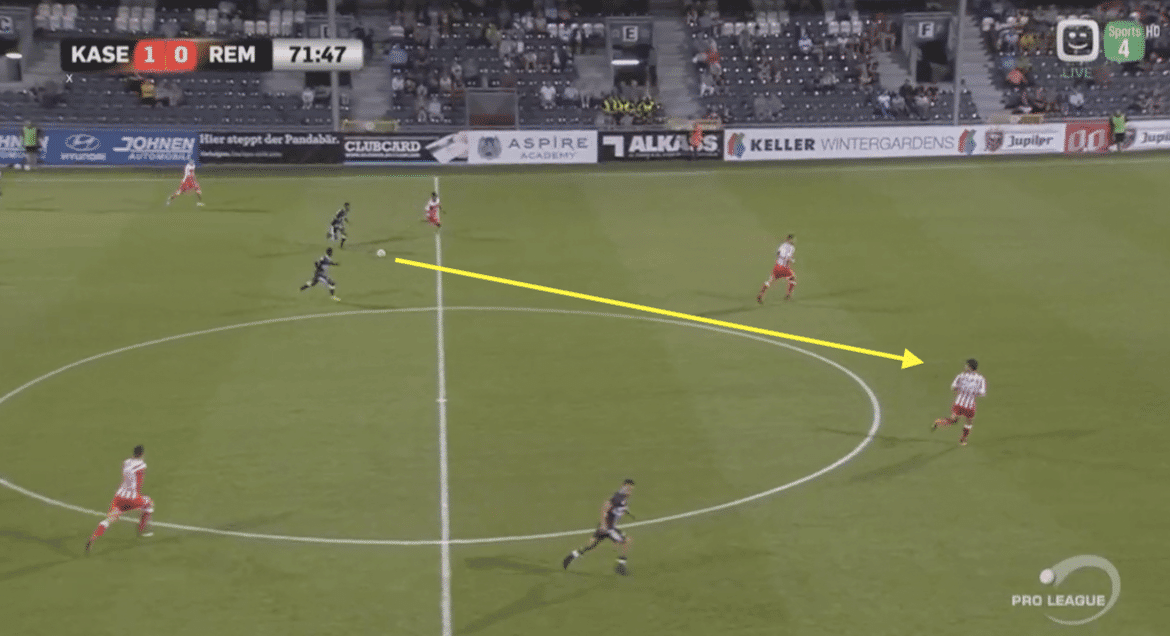 After picking the ball up in his own half, he only needs 10 touches and six seconds to dribble his way through the middle and find himself surrounded by defenders. 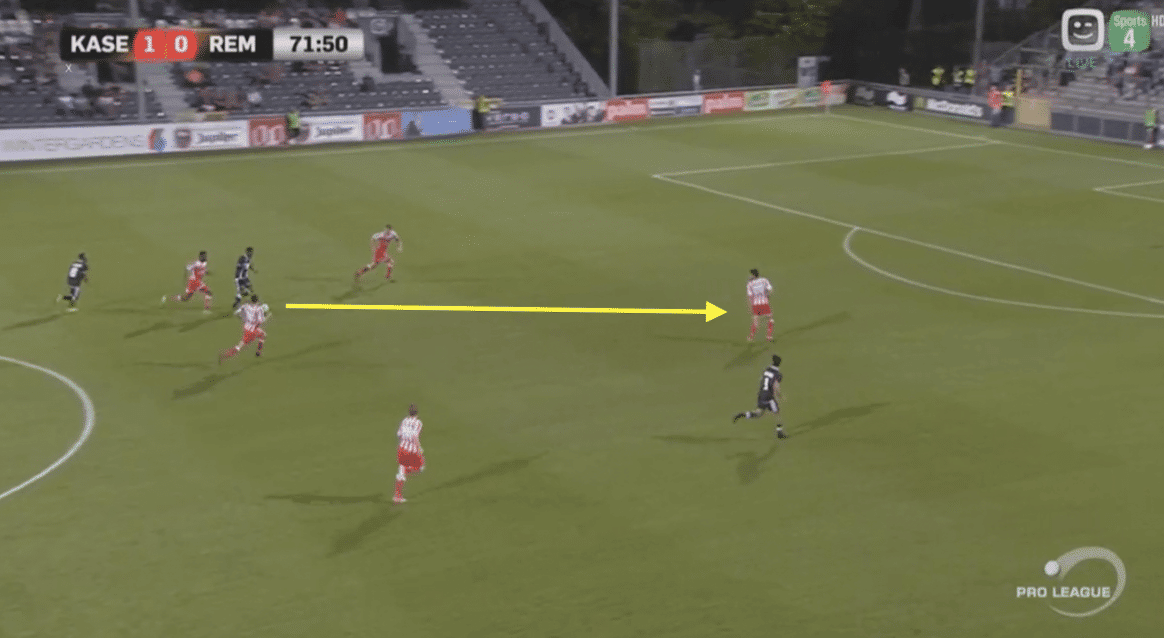 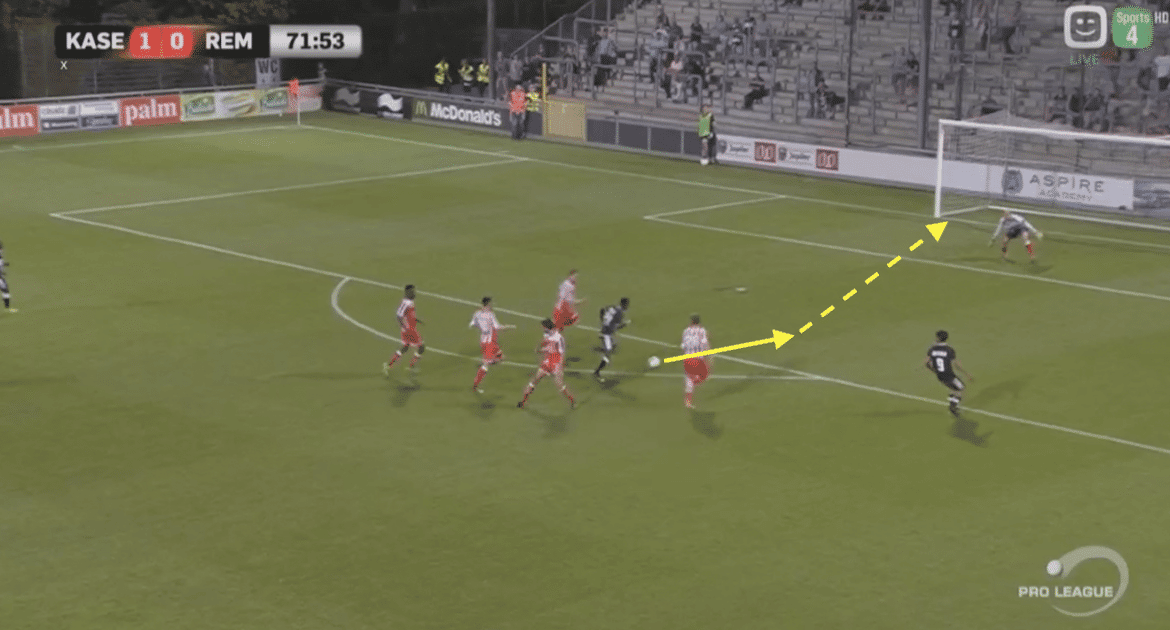 Some lovely footwork takes him past them and he still has the sense about him and the composure to slip it beyond the keeper and into the far corner.

All too often when you see tricky, pacey wingers, like Liverpool transfer target Lucas Moura at Paris Saint-Germain or Man City’s Raheem Sterling, they can fall at the final hurdle and fail to get off a shot or find a team-mate and it’s no surprise that Onyekuru resembles a young Thierry Henry.

“Football was my relaxation after school. With my friends, we watched the Premier League every weekend,” he told Het Nieuwsblad during an interview back in December. “I’m a huge Arsenal fan, Thierry Henry is my idol. Now I’m a professional footballer, I try to copy him as much as possible.

“I look back to the games I saw as a boy, but I also regularly watch videos on YouTube to see how he did certain things.”

That run was not a one off, and time and time again he’s burst beyond countless defenders. The Belgian league doesn’t provide in-depth statistics, so you can’t measure him against other players in a similar position, however, to watch, it’s very impressive.

Demonstrating quick feet is close situations, he can dribble his way out of trouble and open up chances for team-mates.

More than just a one-trick pony, he works hard off the ball too. Whether it’s a run in behind to make space, or relentlessly closing down opponents to win the ball in dangerous positions, he is a player with a great engine and an impressive work-rate.

Where would Onyekuru fit?

With the skillset that he possesses, the Nigerian forward would be able to take a place in any three-man attack, or as part of a two. When in a three, you could rely on him tracking back to some extent, although you would rather he be allowed to concentrate on the attacking front.

He plays beautifully off the shoulder of the last defender and has the pace to get in front of his marker when crosses come into the box.

Onyekuru has so much room to improve his game, tighten up in several places and add consistency to the talents he has already shown.

At first, it’s his pace that will cause the most damage, especially late in games. On a few occasions, long hopefully balls up the pitch by the Eupen midfield have turned into goals just from the 19-year-old’s stunning acceleration. Just when you think the chance is gone, he’ll reach the ball before a defender or goalkeeper and change the outcome of a game.

“I believe I have the level to one day play in the Champions League,” he continued in his interview. “I look at what happened to Wilfred Ndidi. We come from the same region in Nigeria and meet up regularly. His transfer to Leicester is an example for me.

“The Premier League is my dream league, although I would rather go to Arsenal.”

His dream has come to fruition and the gauntlet had been laid down for the youngster; make Arsenal regret not signing him. However, a move to Goodison is perhaps better for his career. It’s a club who has history in blooding youngsters, investing their time develpping them and giving them the platform to flourish.

Fast forward three years and Ronald Koeman could have one of the most exciting attacks in Europe with Onyekuru one side and Ademola Lookman on the other.