In the summer of 2016, André Gomes faced the biggest decision of his football career. He had impressed for Valencia, so much so that Europe's richest clubs had circled. Yet two led the race: Real Madrid and Barcelona.

The Portuguese midfielder had offers from both. Yet, he subsequently admitted, there was only ever one side he wanted to join. “When Barça came to me I didn't have much to decide,” he said. “It's an honour to wear this shirt. I am very proud. I've fulfilled a dream for me and my family.”

Barcelona spent an initial €35million on Gomes. He was viewed, by some at the club, as the eventual successor to the great Andrés Iniesta. A smart, technically gifted midfielder through whom attacks could be constructed.

But the Portugal international struggled. And then got worse. He was jeered by the supporters who were meant to cheer him.

“Maybe it's not the correct word but it turned into a bit of a hell, because I started to feel more pressure,” Gomes said in an interview with Panenka magazine in March 2018. “With pressure I feel fine but putting pressure on myself… I don't. The feeling that I have during games is bad.

“On more than one occasion, I didn't want to leave my house. Because people look at you, having the fear of going on the street out of shame.

“Thinking too much has hurt me. I think about the bad things and what I have to do. Although my teammates help me a lot, the things don't work out the way they want them to work out.”

Gomes needed to escape Barcelona and Everton offered him a way out last summer. He joined the Toffees on loan but arrived injured. It wasn't until late September that he made his debut.

Yet when fit, his impact was immediate. The old Gomes, decisive and progressive with the ball, was back. There was a swagger to his game, a confidence that had ebbed away at Barcelona.

In the Merseyside derby at the start of December, the 25-year-old was the best player on the Anfield pitch. He was named man of the match by Sky Sports pundit and Liverpool legend Jamie Carragher, who tweeted after the game that Everton needed to make his loan switch permanent. 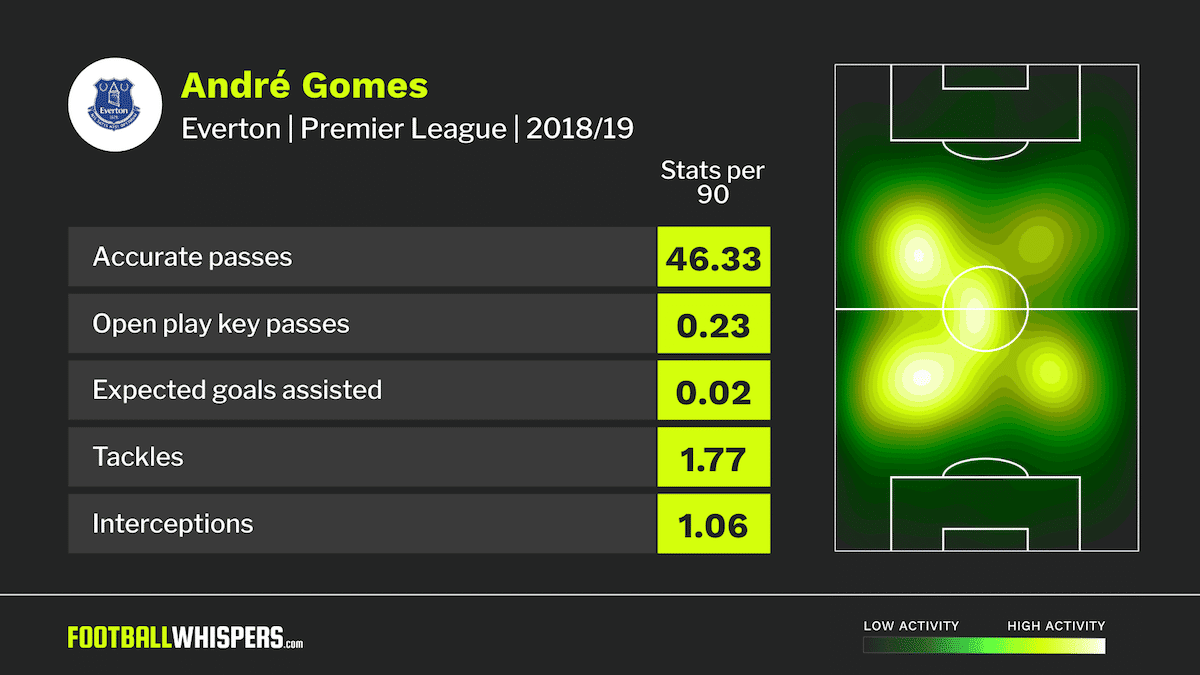 Reports in the Spanish press this week suggest that is a real possibility. Barcelona don't want Gomes back at the Camp Nou. They've moved on, with young midfielders Carles Aleñá and Riqui Puig now in the first-team squad.

The Catalans hope to raise at least €25million from the sale of the midfielder. Earlier in the campaign, Everton would have undoubtedly paid such a fee. However, over the last three months, Marco Silva's side have struggled and that has impacted Gomes.

His defensive output has increased – he is making marginally more tackles and interceptions – but Gomes isn't in the Everton team to break up attacks; that is the job of Idrissa Gueye.

“He's unhappy in this moment in his performance,” Silva said when discussing his No.8 after last month's defeat to Southampton. “He's already done very, very good things for us but he didn't perform and we didn't see the normal André Gomes against Southampton – but everything will change.”

Gomes was given opportunities to prove Silva right; he started the following five games, but four of those matches ended in defeat. And it was telling that after a two-and-a-half-week break, the midfielder was dropped for Everton's trip to Cardiff City on Tuesday, a game which they won 3-0.

Morgan Schneiderlin and Gueye screened the Toffees' defence in South Wales; substance over style but it paid off. Even when Gomes was introduced with two minutes left to play, it was in place of No.10 Gylfi Sigurðsson.

And that leaves Silva with a dilemma ahead of the second Merseyside derby of the season. Does he stick with what worked at Cardiff? Or does he put his trust in the man who controlled the reverse fixture? He hinted on Tuesday night it would be the former.

“I will always take the right decision for our team,” the Everton boss said. “I am here to make decisions and decide what is the best XI for the match. Morgan gave to me the right answers in the last 15 days.”

A break from the first team is, arguably, exactly what Gomes needs. He arrived injured, without having undergone pre-season, and then when fit played 19 straight Premier League games. A drop-off in performance was almost inevitable.

However, before the end of the campaign, Gomes will need to be given another run in the starting XI. His quality is undeniable, it's his consistency that remains in doubt.

If he can recapture the confidence and assuredness that defined his early Everton displays, it's a no-brainer that the Toffees attempt to sign him permanently in the summer. Fail do to so… well, at least ‘hell' doesn't have any vacancies.