Brazilian football is on the rise. Flamengo claimed the Copa Libertadores after defeating River Plate in the final. Real Madrid signed two of the brightest talents from Brazilian Serie A in Vinícius Júnior and Rodrygo Goes. And many of Europe’s elite are keeping tabs on Bruno Guimaraes, Reinier, Everton, Antony and a certain Gabigol.

While most of these are likely going to move for big money down the line – Inter reportedly want to cash in on Gabigol after his goalscoring heroics for Flamengo – there are still a number of bargains to be had.

One such player to fall into this category is Evanilson. If reports are accurate, Liverpool are one of a number of European clubs interested in the Fluminense midfielder.

The 20-year-old is out of contract next year and is free to negotiate a move elsewhere in January if he continues to reject the latest deal the Brazilian club have proposed.

Evanilson is believed to feel undervalued and this is his motivation behind weighing up his options. Fluminense are not against parting ways with the player, but the club do not want to lose him for nothing.

“Fluminense are cash strapped so even if a bid was something like £4million, a relative pittance for a Premier League club, that converts into roughly 21 million reais, a fortune for the club in their current predicament.

“Brazilian teams love selling to the Premier League, and China, but not just because of the money on offer. The exposure they receive benefits them in the long run.”

He was the top scorer in the Brasileiro Under-20 with 15 goals. The Brazil under-17 international also impressed while on loan with STK Samorin. Fluminense used their link with the Slovakian club to get Evanilson much needed first-team football during the 2017/18 campaign.

It was while on loan that the 20-year-old went through something of a metamorphosis. Speaking with Football Whispers, Globo Esporte journalist Felipe Siqueira detailed the evolution in Evanilson’s game.

“He started as a winger, that’s where he played during his youth career, but while with Samorin he was deployed as a striker.”

The Fluminense attacker wasn’t in Slovakia for long but he made the most of his time, scoring three goals in six outings. The most striking part of his loan spell, though, was how much of a natural he looked played in a central role.

He’d drop deep to link play before spinning in behind and putting his pace to good use. 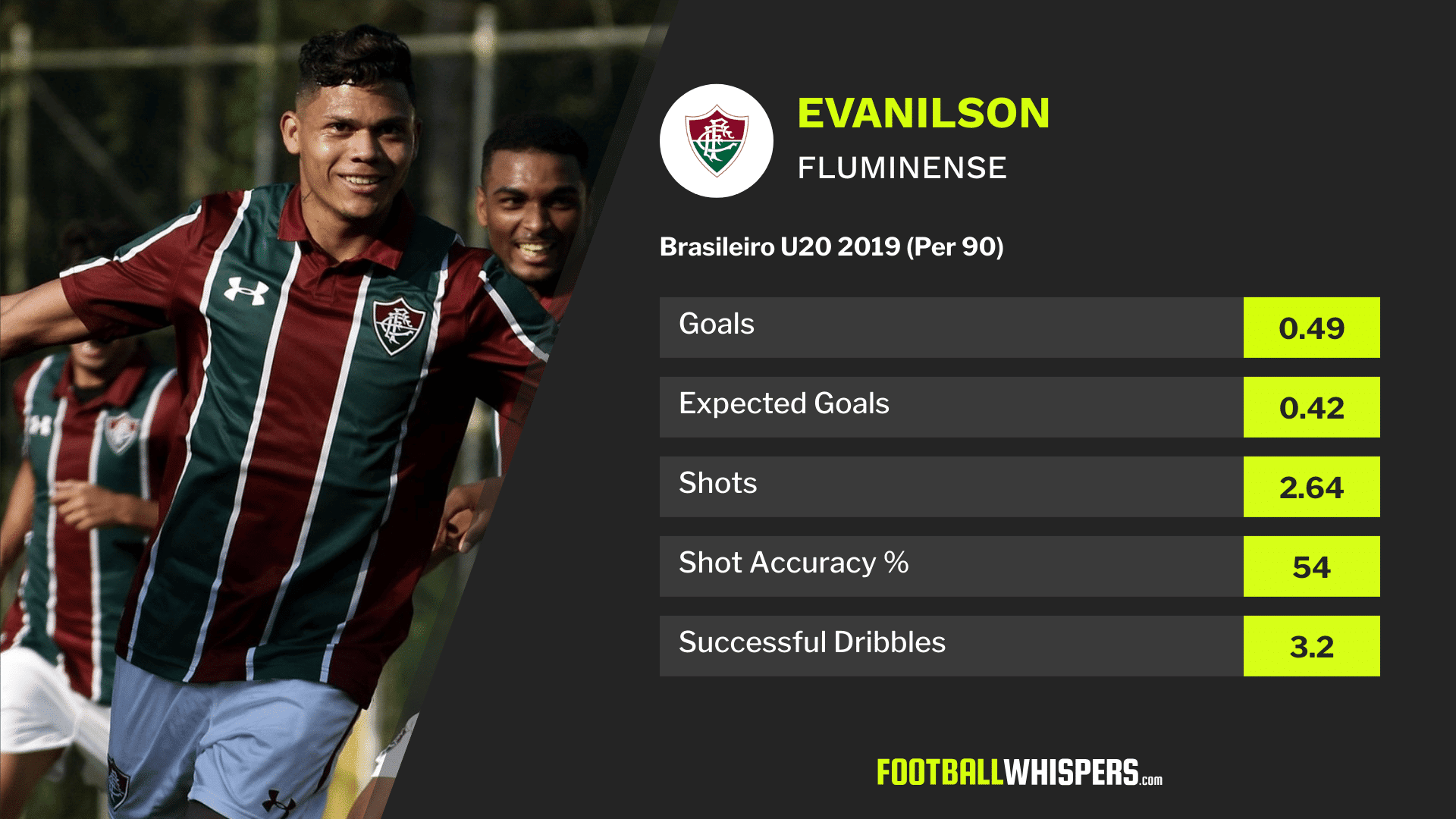 A confident and competent dribbler, his skill set perfectly aligns with what is required to play the part of a modern-day No.9. He's continued in this role for the Under-20 side and he's thriving there.

This season he's averaged 0.49 goals per 90 from an expected goals average of 0.42. It shows his form is sustainable. He isn't grossly outperforming his underlying stats so there's nothing there to suggest there will be a drop-off anytime soon. The standard of quality needs to be taken into account, however.

Evanilson isn't reliant on a high volume of shots for his goals either. Another positive about his form. It highlights he isn't wasteful, landing over 50 per cent of his shots, and he knows the benefit of taking high-value efforts.

A carryover from his days as a winger is the frequency of his attempted dribbles. He starts over five on a per 90 basis and completes 3.2 of them. It's an important dimension to his game and one very few others can replicate.

The 20-year-old is a player with many strengths and few weaknesses. He's young enough to be crafted into whatever a manager might want. Evanilson could be a false-nine or a wide forward. He's got the work rate and the intelligence to be the former and the explosiveness to be the latter.

With so many teams turning to Brazilian strikers, Joelinton and Wesley joined Roberto Firmino and Gabriel Jesus in the Premier League, it's clear these players work well in English football.

Signing Evanilson isn't going to cause shockwaves like it would if a club signed Vinícius Júnior, but he has the potential to be one of the shrewdest buys in a long time.

If managed properly he could be a useful squad player for a number of top teams.