Despite a slow and uninspiring summer, Saint-Etienne started the new campaign surprisingly well. The influence of new coach Óscar García was clear to see but he also helped bring a spark out of some lesser known players.

Once of which is forward Jonathan Bamba, and now, with an ongoing contract dispute, the 21-year-old become a free agent in the summer and reports in France suggest that Huddersfield Town have now become the newest club to show in interest, joining Newcastle United in their pursuit.

Once a French behemoth, Les Verts are now considered a sleeping giant.

Great players have come and gone from the legendary club. The development of Blaise Matuidi, to the emergence of Pierre-Emerick Aubameyang to one of Europe’s best centre-forwards and the nurturing of Chelsea centre-back Kurt Zouma.

The Stade Geoffroy-Guichard is still a venue were young players can make their name.

The new campaign looked bleak. New boss took over from long-time stalwart Christophe Galtier and with murmurs of discontent and a lack of reinforcements, a top five finish looked out of the question.

Unexpectedly, but almost very Sainté-esque, they have gone about their business quietly and efficiently. After 12 games, Saint-Etienne sit sixth, but have slipped five points behind Nantes in fifth. They will be hoping Claudio Ranieri's team's pace won't last.

Who is Jonathan Bamba?

In their first seven fixtures, it was the 21-year-old Bamba who has emerged from the shadows, scoring four times and picking up an assist.

Lois Diony was signed from Dijon after contributing to 19 goals as the Burgundy side avoided relegation and the 24-year-old looked to be the man who would lead Les Verts' attack. 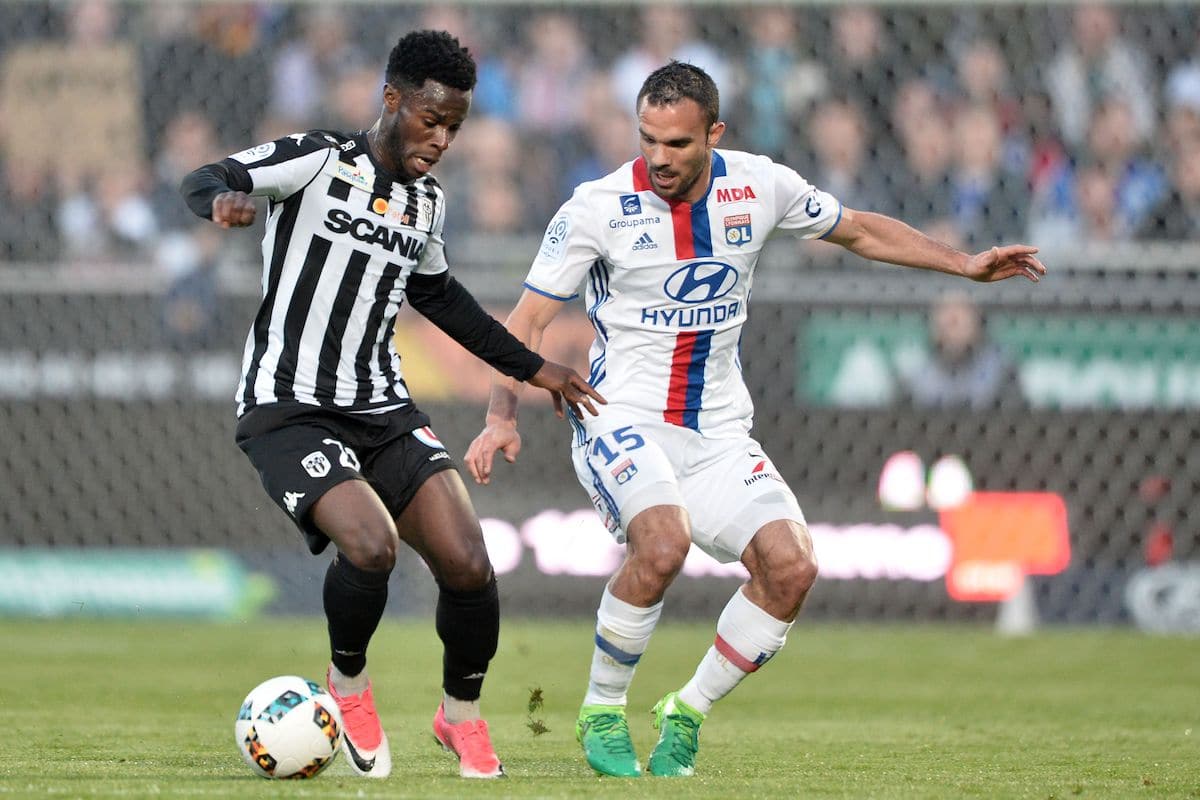 Returning from a loan spell at Angers, no one really predicted anything from Bamba

He’s been a feature of the Saint-Etienne first-team since he made his debut in 2015, coming off the bench in a 1-0 home defeat to PSG.

That season was followed up by four starts during the 2015/16 campaign in which he would score his first senior goal. Bursting in from the right, he would fight his way into the box, before finishing high in the corner with his left foot.

A loan spell at Ligue 2 side Paris FC followed and he picked up some vital experience, starting 13 times and notching up two assists.

“This move to PFC has made me stronger,” Bamba told Le Parisien. “I hope to return to Saint-Etienne and impose myself. I came to save PFC, so it is a big disappointment [they were relegated]. My stats are not brilliant either, but here I have matured. Before I ran everywhere, but I learned to channel myself.”

In this season’s opening fixture against Nice, Les Verts would have been expecting a difficult test against the side who finished third in Ligue 1 last term, but the lessons of the Spanish coach could instantly be seen.

From the opening whistle, the attack, with Bamba playing somewhat out of position as a centre-forward, were chasing the pressing the OGCN back-line.

You can see in the graphic below, Arnaud Souquet is caught on the turn and Bamba is straight in to pile on the pressure. 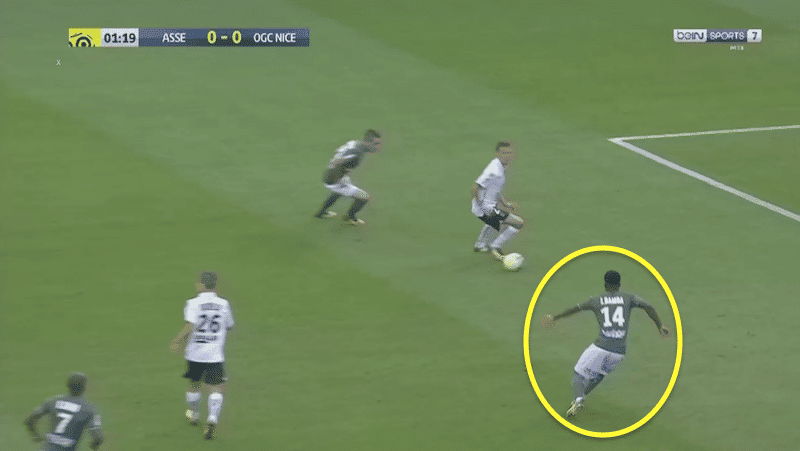 The full-back finds Maxime Le Marchand, but again, the 21-year-old with his pace and energy is quickly across to force the defender into a long pass and the home side are back in possession. 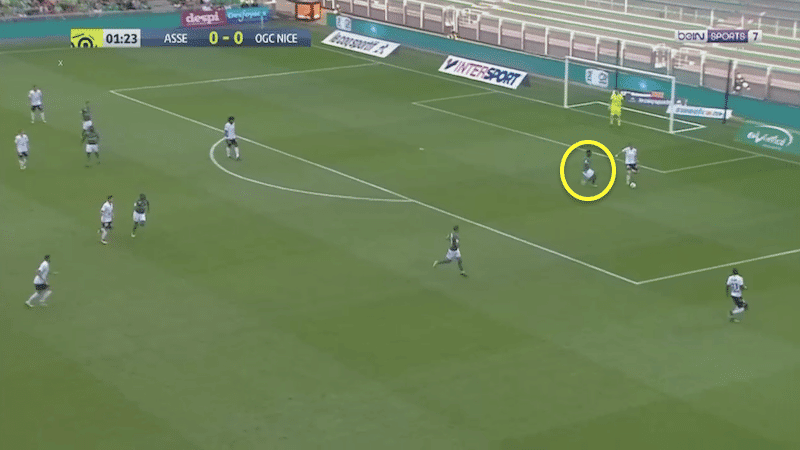 Bamba had never featured as the central striker before. Not for his parent club, Paris FC, or when he spent another two spells away from Saint-Etienne last season, first in Belgium and then joining Angers on loan in January.

Always deemed a winger due to his pace, dribbling ability and eye for a cross, García must have seen something in him, similar to the way Kylian Mbappé lined up for Monaco that saw him play through the middle.

“He's crossed a level. He is no longer the young substitute who returned to compensate for absentees,” said Galtier, his former coach while watching him on loan at Angers. “He is climbing up the ladder, gaining experience.

“At Angers, from what I can see, he is working on his defensive contribution. In this team, if you don’t, you won’t play.

“He has grown in maturity, in consistency. I think he also won on an athletic level, he's stronger in his game.”

Bamba has the pace to burst wide, get past his man and push on to the by-line. Now, given the freedom of the attack, he can play off the shoulder of the last defender and latch on to long balls over the top.

Capable on both feet, you can’t just show him to the outside, he’s already proven in his young career he can find the far corner or deliver a cross with his supposedly weaker left-foot.

He has also demonstrated the vision and intelligence to pick out his team-mates with a variety of crosses. Looking for the best option, be it a dink to the far post, or a cut back, rather than just drill the ball into space.

Just three minutes into the new Ligue 1 campaign, he showed that intelligence could be applied to his movement too.

Hamouma picked the ball up in the middle of the park and pushed the tempo back towards the Nice defence. 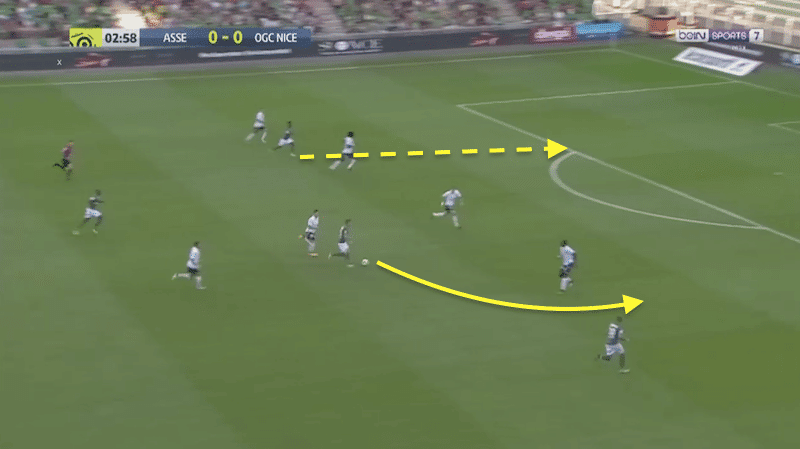 When the ball is played out to the right the temptation would be to use his pace and burn past the much slower Dante and get into the box. 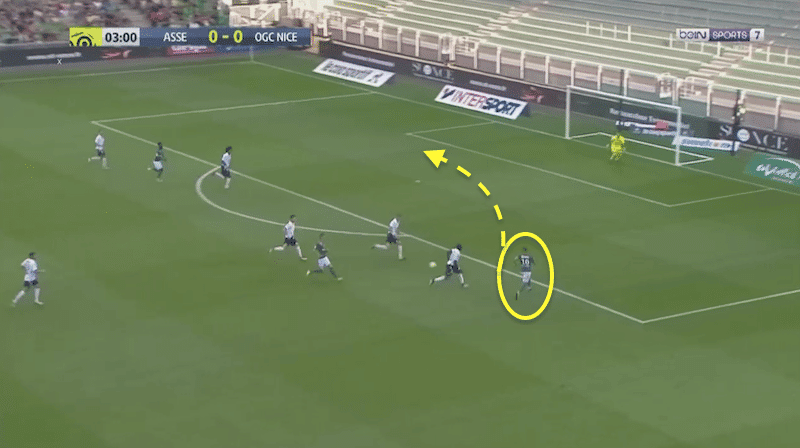 There’s no doubt that Bamba would win a foot race against the Brazilian, but the 33-year-old knows that too.

In anticipation, the former Bayern Munich man races back towards his goal in order to cut out that option. 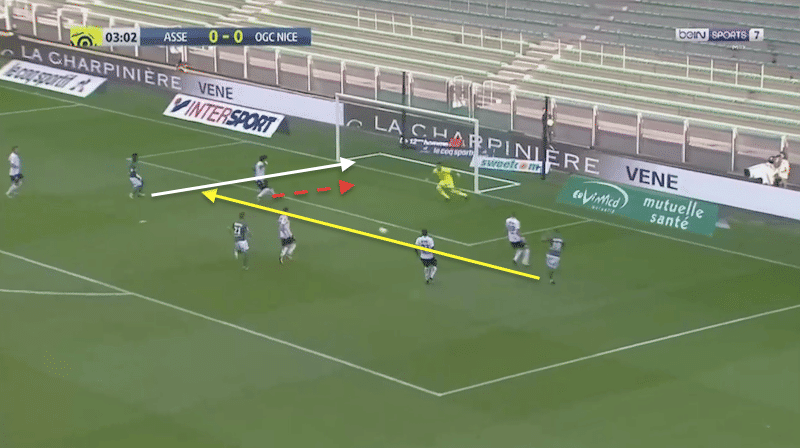 The young forward is smart though, rather than enter the obvious race, he checks his run, Dante’s own recovery creates the gap between the two and Oussama Tannane can square the ball to the unmarked forward.

Three minutes into his first game for Óscar Garcia and his football IQ has handed him a tap-in.

It’s still early in the season, but the combination of the Spanish coach, his pressing methods, and the 21-year-old’s attributes seem to be the perfect match.

Only two forwards in the league make more than Bamba’s 1.7 tackles per 90 minutes. Former ASSE forward Nolan Roux only wins 0.3, while Edinson Cavani averages 0.8 and the hard-working Valère Germain for Marseille wins 0.7

That’s the side of his game, as well as looking a lot stronger and powerful, that has improved since the spell at Angers.

His talent hasn’t gone unnoticed, a former Newcastle United transfer target, he was also linked with moves to Atalanta and Sevilla this summer.

The 21-year-old still has a lot to learn in terms of being an all-round forward. He could be better in the air, winning just 0.6 aerial battles per game. Standing 175cm tall, that may be something he's always working on.

Only ten of Bamba's 27 shots have come from inside the penalty area, which makes it surprising that he has managed to lead Sainté in xG on 4.59 this term. His finishing could improve, which would be helped if he was more selective.

How much is Bamba Worth?

Bamba’s contract is up next at the end of the season, and after a bright start the dispute saw him relegated to the reserves during most of October. Reinstated for the games against Strasbourg, Toulouse and Lyon, his people have apparently agreed to return to the table for talks.

Les Verts are up against the wall, and they won't be able to command anything like the fee is is worth and if they had to cash in, they may have to accept less than £4million in January.

Now, after a strong opening to the campaign, he may have earned himself a new bumper deal, or he could be tempted to test the waters outside of the Geoffroy-Guichard.

Either way, his development and growth at the club has worked and under García he will have the chance to flourish. Saint-Etienne will just have to hope they haven’t left it too long, or they might never get to see the full fruits of their labour.