This season looks like being another campaign of struggling against relegation for Hamburg. Die Rothosen are the only side to have featured in every Bundesliga season since the league's inception in 1962, and a clock, prominently displayed at their Volksparkstadion home, counts every minute of their run in Germany's top flight.

The clock almost stopped ticking last season, as Hamburg narrowly avoided relegation, and, sitting 15th in the 18-team division, they appear to have a similar fight on their hands this term.

But hope comes in the form of a precociously gifted 17-year-old striker who has taken the Bundesliga by storm since his senior debut in September. Jann-Fiete Arp is the talk of Hamburg, and looks set for a stellar career at both club and international level.

Arp has been on Hamburg's books since he was ten years old. He has been noted as a prospect of real promise for some time, and shining for the club's under-17 side when he was just 15 with an incredible 37 goals in 45 games.

He has proven equally prolific at the same level for Germany, captaining the side and netting 18 times in 19 appearances, including five goals at the recent FIFA Under-17 World Cup in India.

Arp was first invited to train with the first-team squad by Hamburg manager Markus Gisdol back in November of last year, and finally made his debut in September's goalless draw with Werder Bremen, replacing Bobby Wood as a last-minute substitute.

In his next appearance, a 34-minute run out in a 2-1 defeat to Hertha Berlin, Arp became the first player born in the 21st century to score in the Bundesliga. Gisdol rewarded the teenager with his first start in the next game, a much-needed 3-1 win over Stuttgart. Arp was again on the scoresheet and has since been an ever-present.

Both stylistically and in terms of his progression from youth team standout to first-team star, Arp has been likened to Tottenham Hotspur striker Harry Kane, and the teenager names the England hitman as one of his main inspirations.

“There are many good strikers that you can learn a lot from by watching,” Arp told UEFA in May. “But if there was just one player I had to pick as my role model, it's Harry Kane. He plays the way I want to play. He's quick and very comfortable with and without the ball. It's difficult to stop him. You need to pay attention for 90 minutes because he can score at any time.”

“He went through all the youth teams in his club, became a first-team player at that club and was even the Premier League’s top scorer, twice. Now, he's an international. In the space of three years, Kane has made every step that you dream of as a young player.”

But considering the fact that Arp has established himself as a regular at senior level three years earlier than Kane did at Spurs, it could be argued the German is ahead of the Premier League goal-getter developmentally.

What is most impressive about Arp is that, despite his age and relative inexperience, he already looks the complete package. At 6ft 2ins, he's strong, powerful and athletic; he's a deadly finisher over all ranges and capable creator when linking with team-mates.

Arp also has the unique knack of being able to score all types of goals: always in the right place to notch a tap-in, while also capable of stunning solo efforts and precise strikes from distance.

His goal in the Stuttgart win displayed the 17-year-old striker's mature movement and impressive confidence. 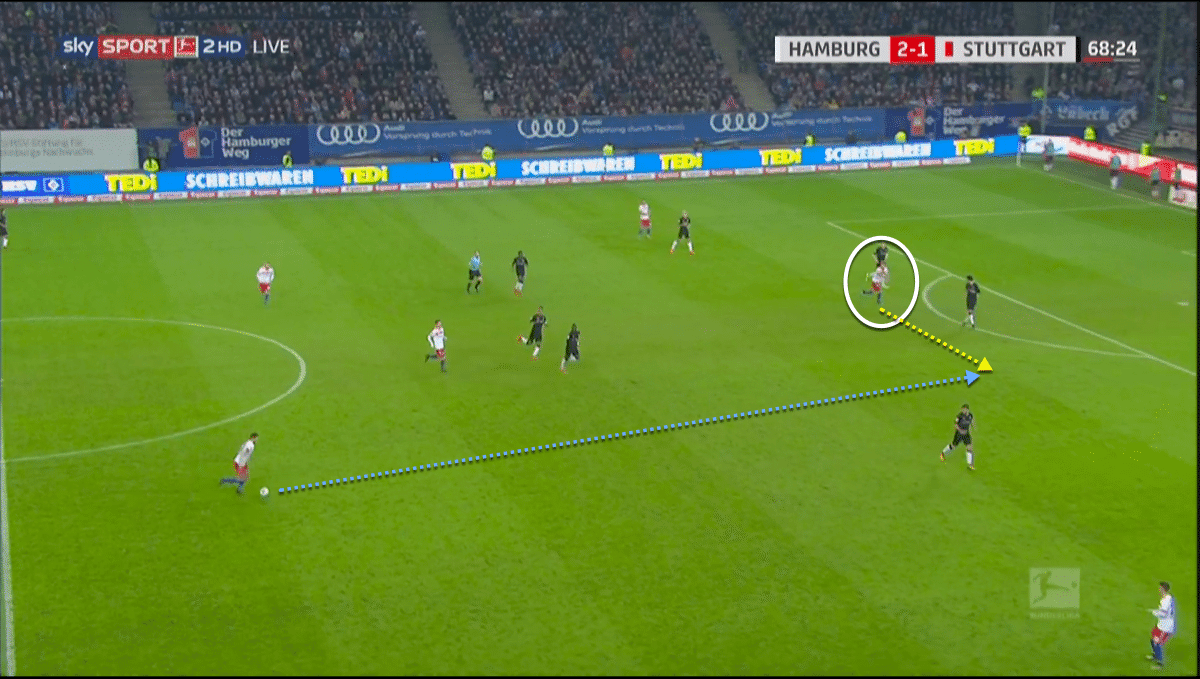 Above, we see Arp (circled), making a run across the Stuttgart centre-backs and showing the player in possession exactly where he wants the ball to be played. 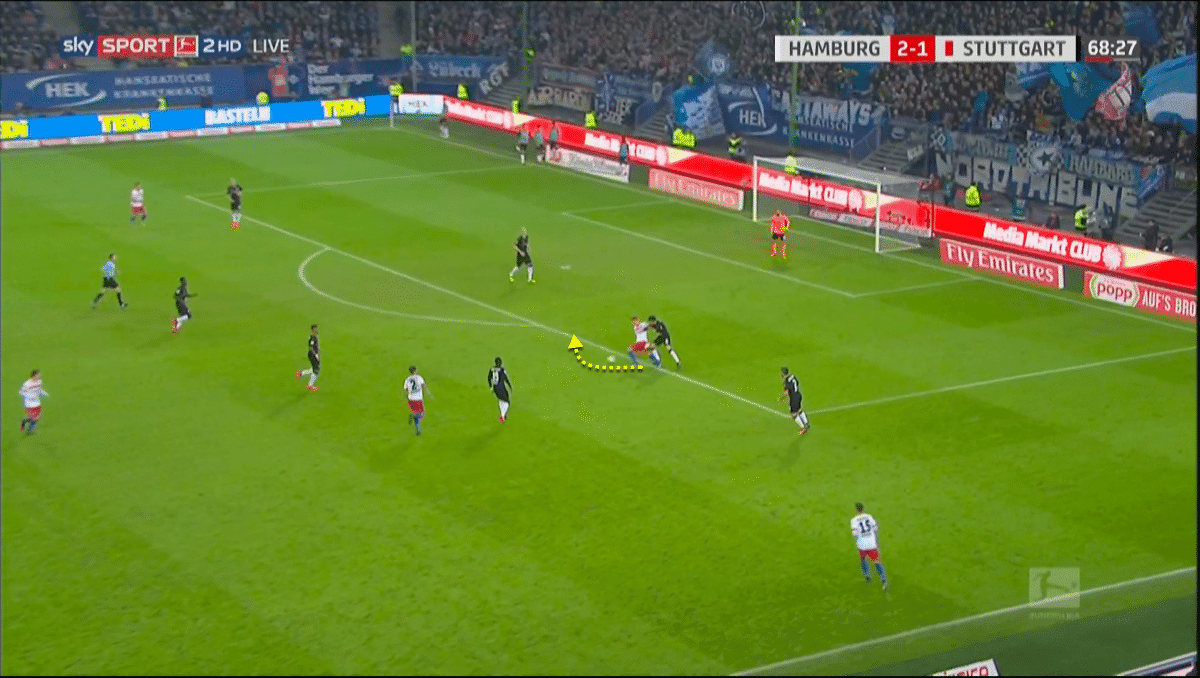 Receiving the ball on the edge of the penalty area, Arp deftly spins away from his marker, creating yard of space for himself and sending the Stuttgart defender to the ground, unbalanced by the quick movement. 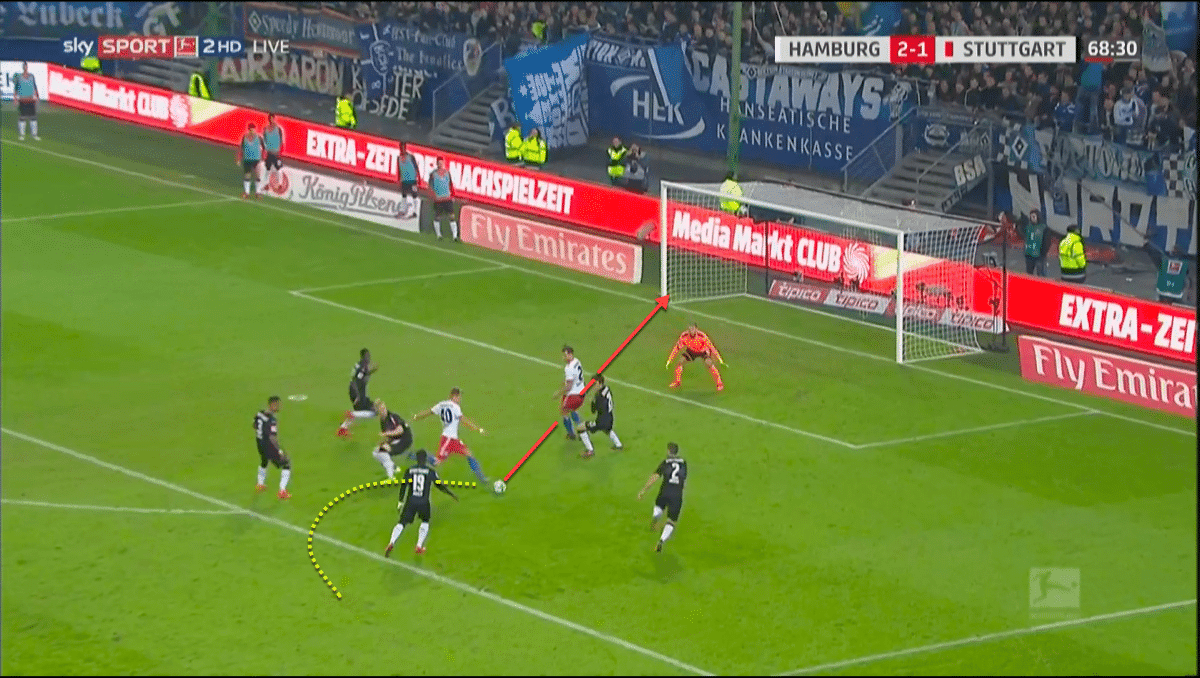 He then calmly jinks beyond a second opponent before driving a low shot into the bottom corner of the goal. In an instant, Apr demonstrated several of the attributes that make his such a special talent: movement, intelligence, technical skill and lethal finishing.

Reportedly wanted by Real Madrid and Juventus, Everton and Tottenham have joined the chase according to the Daily Mirror.

But it is Chelsea‘s interest in the player that is said to be strongest, with the Stamford Bridge club attempting to sign the teenager in the summer.

Arp, showing a wise head on his shoulders, spoke of why he decided against a move to West London: “It would have made no sense as a 17-year-old to go to Chelsea. You’ve barely achieved anything yet and have as good as no experience in professional football. The risk is just too great.”

The Blues are believed to still be pursuing Arp, however, and some reports even suggested recently they were confident of signing the young striker in January, but both Gisdol and Arp's agent have poured cold water on the claims.

For now, Arp will remain with Hamburg and fight to keep them in the Bundesliga. And Gisdol, for one, is extremely excited to have such a gifted youngster in his side.

“He's a massive talent,” the Hamburg coach is quoted as saying. “It's great to have a talent like him on our books. He can become a great player.”