Frenkie is looking to join Nigel and Siem as the latest de Jong to make a name for himself while playing for Ajax. The 20-year-old made his debut for the first-team last season but has stepped up in the opening few months of the 2017/18 campaign under new manager Marcel Keizer, benefitting from the departure of Davy Klaassen to Everton and impressing as a box-to-box midfielder.

Keizer and de Jong already had an existing relationship with the pair honing their respective crafts with Ajax Jong before being promoted to the first team in the summer. Under the guidance of the manager, de Jong won the Jupiler League's Talent of the Season award

A player breaking out at Ajax isn’t something new and because of this it’s often downplayed and almost swept under the rug unless they’re a generational talent. De Jong, at 20, isn’t as young as others catching the eye at the Amsterdam Arena.

Kasper Dolberg, a reported Liverpool transfer target, scored 23 in 47 appearances last season aged just 19 and Justin Kluivert, son of Patrick, put in a number of standout performances as a 17-year-old.

But going under the radar has seemingly worked in de Jong’s favour. He’s not being tipped as the saviour of Dutch football, he’s not being linked with big money moves abroad – not yet anyway – and he’s just being allowed to develop away from the spotlight.

Those who have paid attention to him will know what a serious talent he is and why his eventual, but inevitable, sale could see him become the Eredivisie's most expensive export.

What makes de Jong so special?

The versatile midfielder isn't like countless other Ajax youngsters who went before him.

He's not a product of the famous youth academy in Amsterdam. He was signed from Willem II in the summer of 2015 after he had already made his debut for the Eredivisie club.

It's rare that Ajax, who pride themselves on producing their own stars, will go out and sign a youngster. It shows just how highly they rate de Jong. You can see why though.

It’s not often a player is compared to midfield maestros Andrés Iniesta and Luka Modric. It’s even rarer for a player to actually justify such a tag. But Ajax's No.21 does. As mentioned on a recent World Football Index podcast, de Jong is perpetually on the turn and looking to receive the ball no matter where he is.

In the modern game, midfielders are tasked with breaking the lines and being press resistant.

The two often go hand-in-hand. It's why the likes of Pep Guardiola and Jürgen Klopp have started using attacking midfielders such as Kevin de Bruyne and Philippe Coutinho in more withdrawn roles.

It's what managers want from their men in the middle third. The opposition set pressing traps looking to control the space and drive players into areas they feel they'll do the least damage in.

Managers want to combat this and the trick is having players who are comfortable and confident on the ball so that they're able to keep their composure and create an opening despite pressure.

In that sense de Jong is a natural, as you'll see below, and it's one of the many reasons it won't be long before clubs are queueing up for his signature. 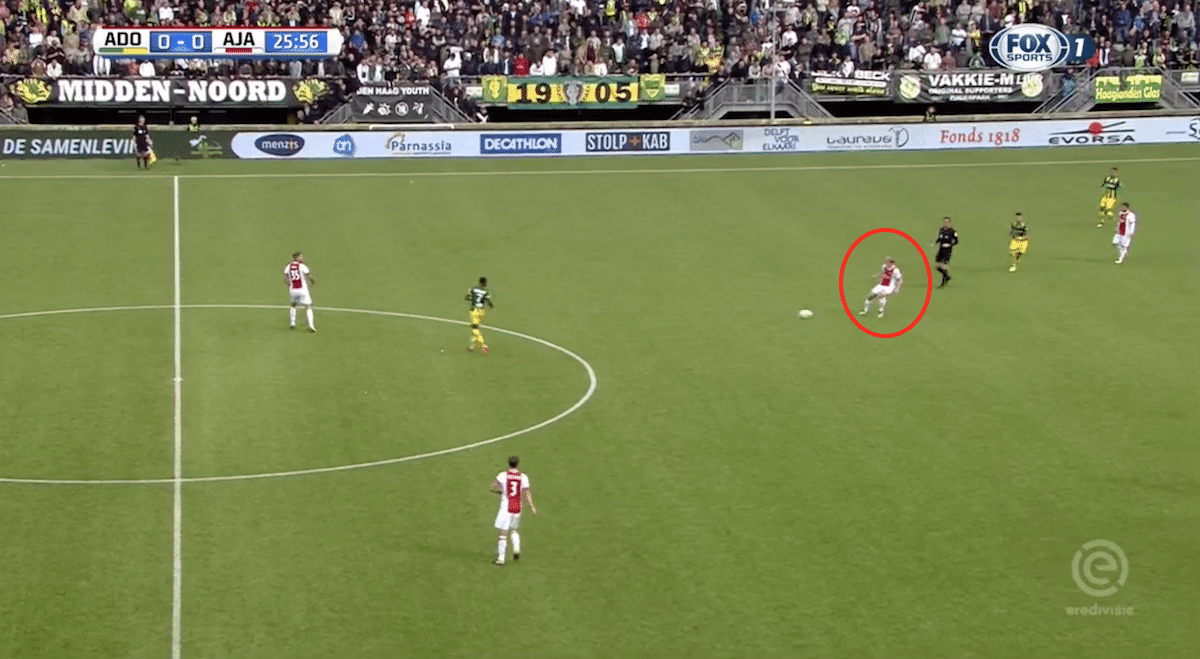 Here you see de Jong, circled in red, dropping deep to pick the ball up off of the centre-back. One of the opposition players is looking to close him down before he's able to turn and face their goal. 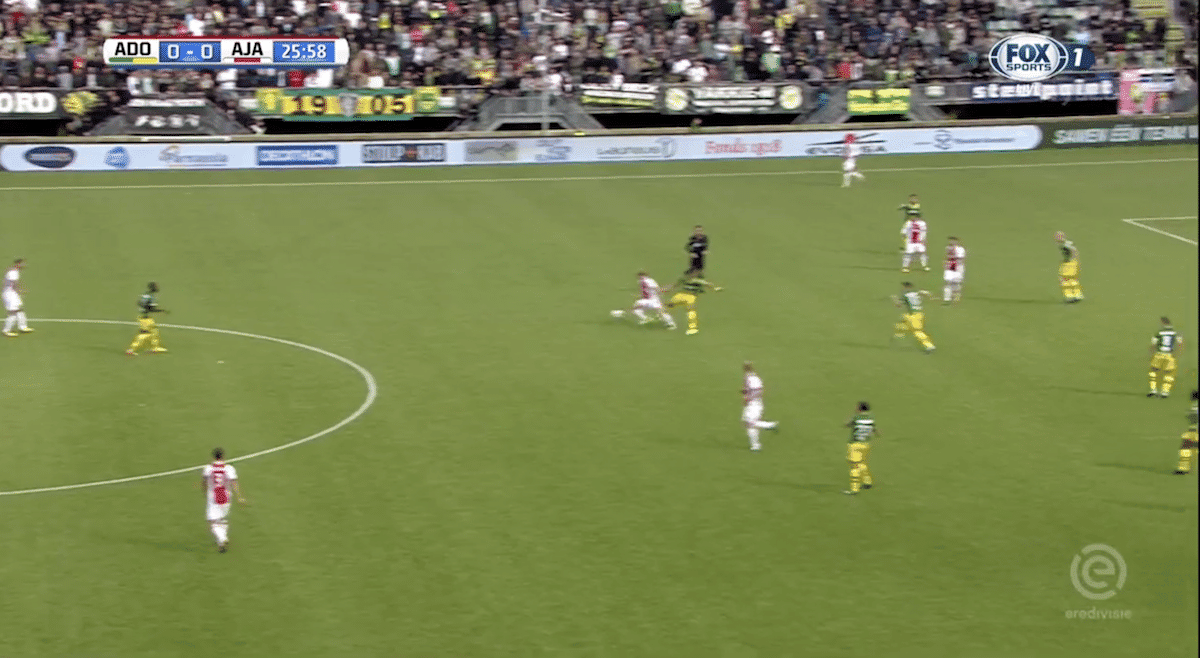 Had he turned to his left he would have been faced by a number of players but the presser is looking to stop him from turning onto his right side. Many in this scenario just play the ball backwards to the right sided Ajax centre-back. But, unflustered, de Jong ignores the easy option. 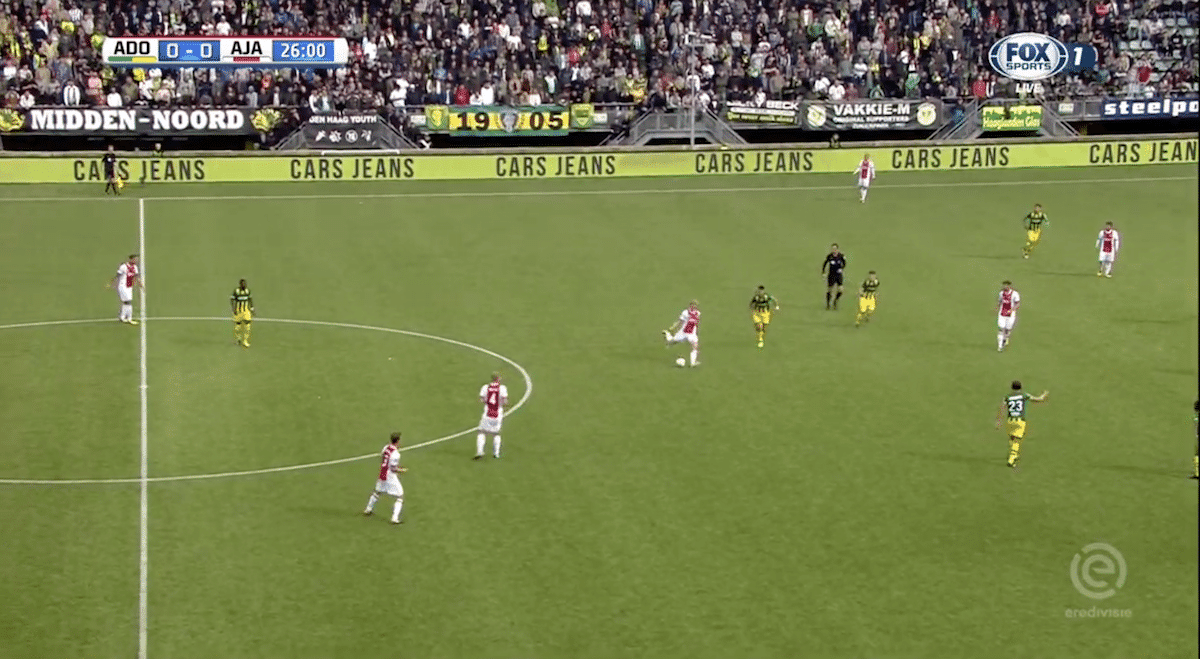 He wriggles free of the man closest to him and cuts back onto his favoured right foot. He's now facing the opposition's goal and has passes to pick out. He's a progressive player. His pass gets Kluivert in behind but a poor touch sees it run into the arms of the goalkeeper. You see in the above series of pictures though just how he's able to manipulate the space so it works in his favour. 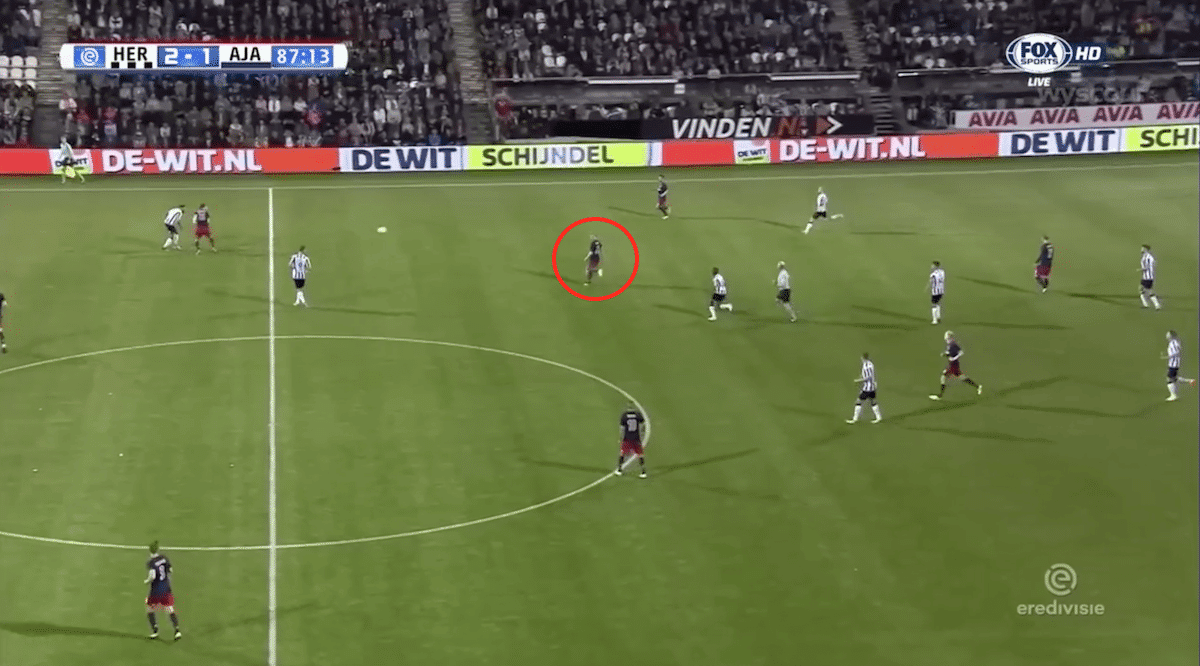 The best players in the world paint pictures of what's around them by taking subtle looks over their shoulders before the ball even reaches them. It can be taught, of course, but those who do it naturally are always one step ahead of the game.

De Jong is no different. In the picture above you see the midfielder looking to his left as the ball is played his way. 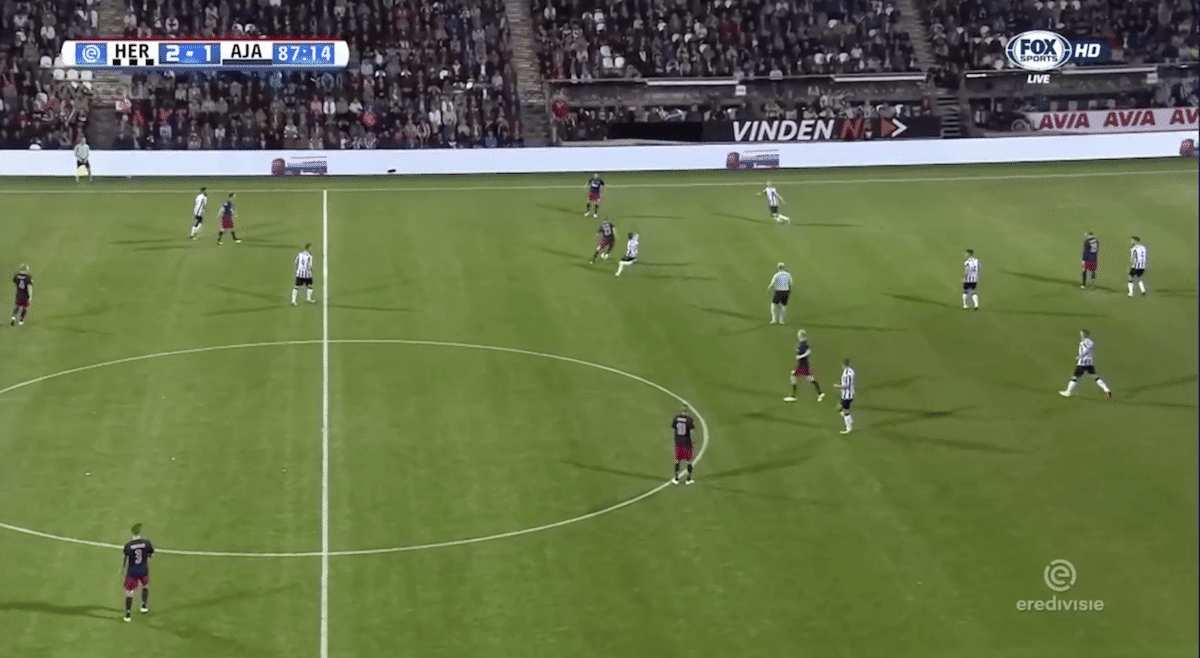 He feints to go to his left but then with one twist of the hips he drags the ball to his right and rounds the man trying to tackle him with ease. He then drives into the space behind the pressing midfielder which automatically pushes the home side a little deeper. 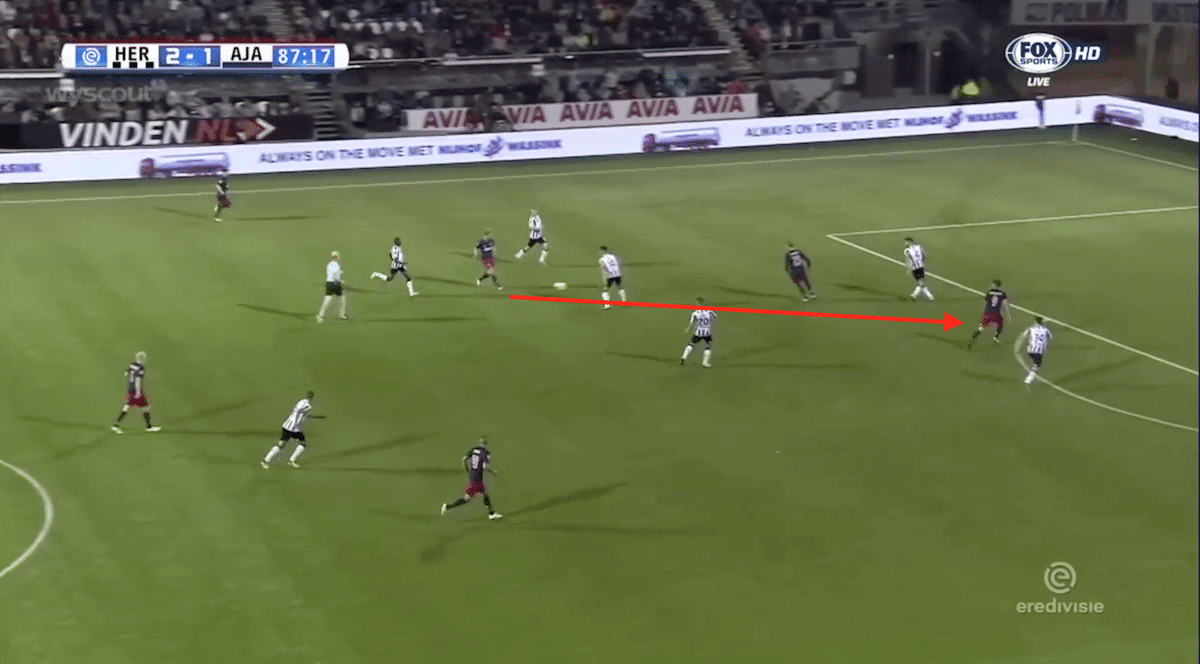 The movement from the Ajax forward's help but it's de Jong's vision, coupled with his ability to execute such precise passes, which presents the away side with the chance to equalise. It's a pass which is perfectly weighted into the path of Klaas Jan Huntelaar but the prolific 34-year-old can only fire his effort straight at the ‘keeper.

That was very much a something out of nothing moment. He took a player out of the game with his initial movement and then his pass took five players out of the game. 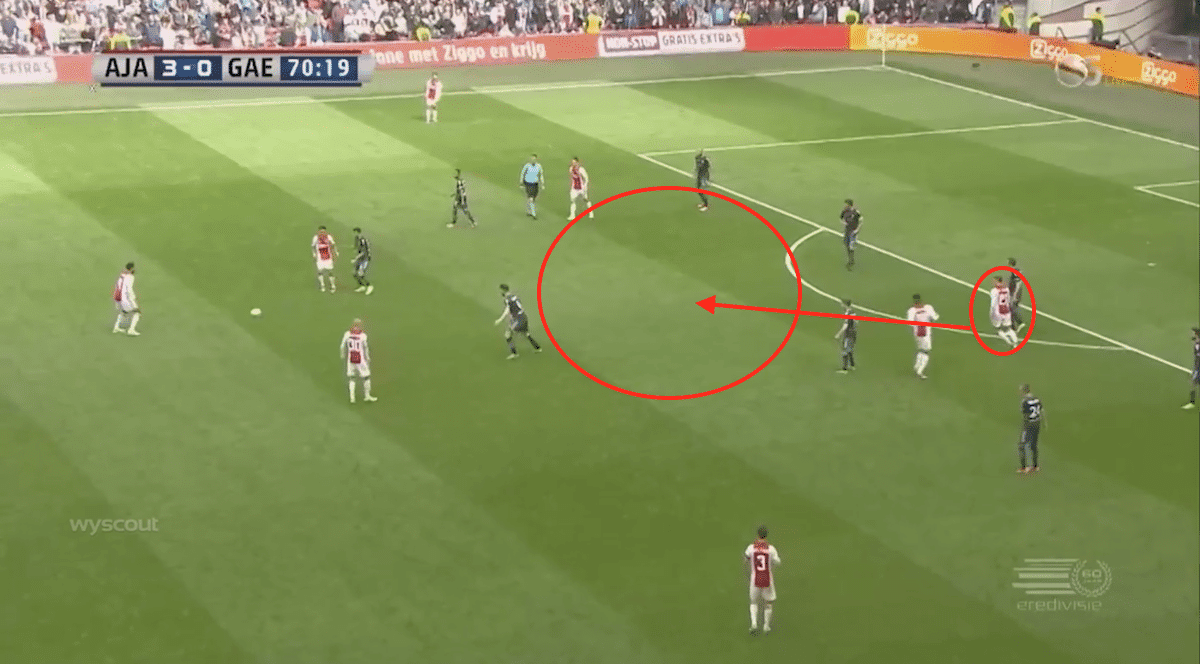 Here you see de Jong's intelligence. In the above picture you see him circled just to the left of one of the centre-backs. Instead of being static he drifts into the space ahead of the right sided centre-back and behind the opposition's midfield. 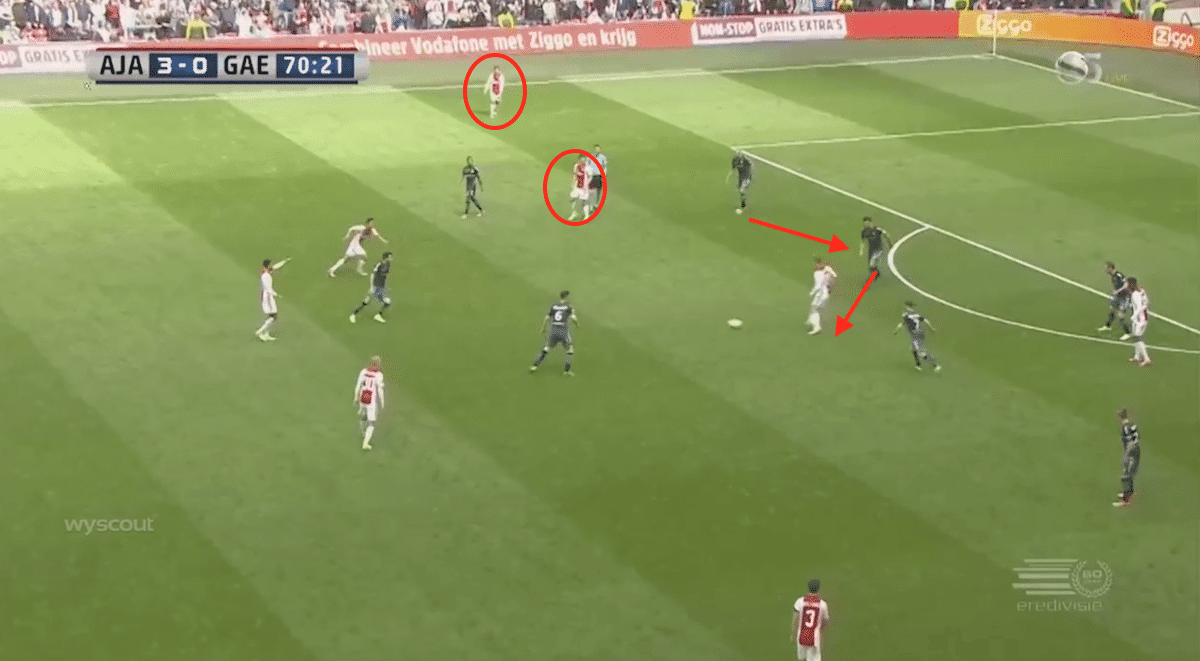 He receives the ball and, because he wasn't tracked by any of the midfielders, it forces the centre-back to push on and look to close him down before he can turn to face the goal. The right-back then shuffles over to cover for the centre-back and it leaves two Ajax players fairly free to de Jong's left. 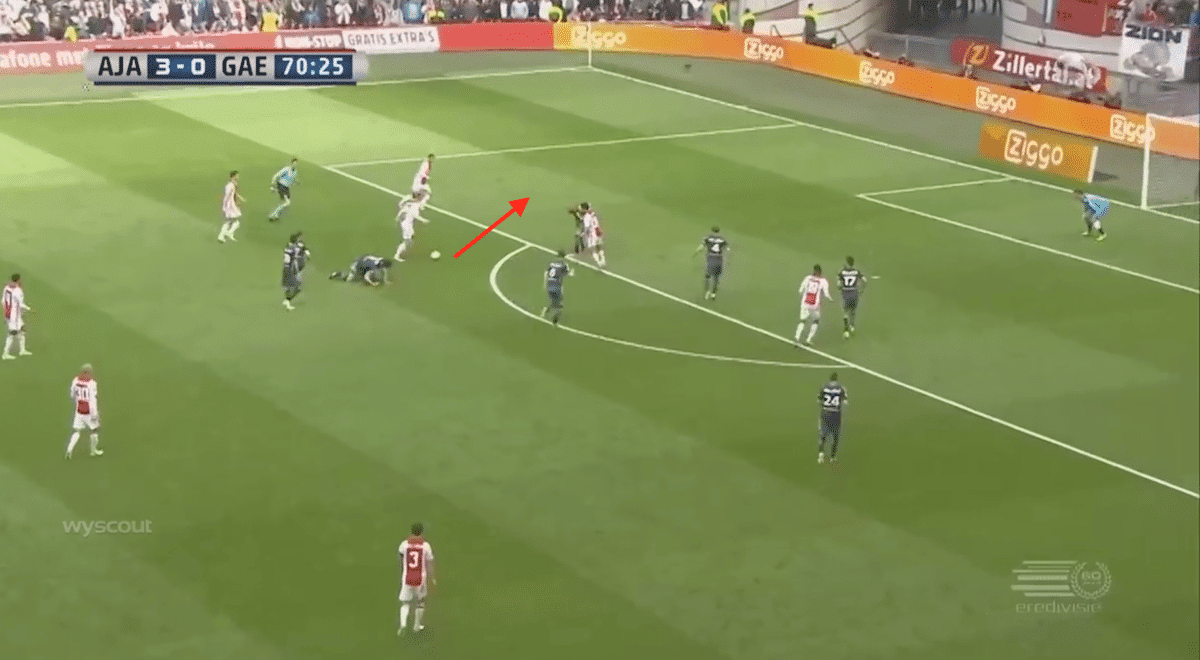 He effortlessly slaloms his way past players, leaving two of them on the floor before playing a pass to the man to his left. He's in acres of space because the right-back tucked inside earlier to cover for the centre-back, who is now on his hands and knees after trying, and failing, to tackle de Jong.

Many here, confident after what's transpired already, may be tempted to get the ball onto their right foot and curl in an effort. But he shows he's got a footballing head on him, even at 3-0 up.

His influence doesn't wane in the defensive third though so don't let his 5ft 9ins frame fool you. He's not afraid to do the not-so-glamorous side of being a midfielder. He could play anywhere in midfield but he's ideally suited to the box-to-box role for now.

If he continues on developing it's a matter of when and not if he gets his move elsewhere. He's a modern day midfielder with so many strengths to his game and so much potential to fulfil.

Under the right manager he could become one of the best in Europe and dictate the play in the Dutch midfield for the next decade. He could well become Ajax's greatest ever export and the best de Jong to play for the club in the process.