There’s a strong feeling of déjà vu amongst Fiorentina fans these days. A summer overhaul saw Federico Chiesa become the poster boy for La Viola and the 20-year-old winger is making the most of his opportunity. They may be tenth in Serie A, and not living up to pre-season expectations just yet, but a Chiesa is once again the talk of Florence.

It sounds familiar because it is. Enrico Chiesa, Federico’s father, emerged as the face of the new Fiorentina back at the start of the 2000/01 season. The club had failed to keep hold of Gabriel Batistuta, who left to join Roma, and it was Chiesa who stepped up to replace the legendary striker nicknamed “Batigol”.

Chiesa Sr. became the main attacker for the club under manager Roberto Mancini and went on to score  22 goals in 30 matches, striking up an understanding with Portuguese playmaker Rui Costa.

They say chaos creates opportunity. This was Federico’s chance to push on and become an integral part of the first team, and that’s exactly what he’s done, even in these early stages of the season.

It’s highly unlikely he’ll emulate his father’s achievements from almost two decades ago. Chiesa Jr. inherited many things from his dad – he’s quick, strong and hardworking – but a natural goal-scorer he is not.

The left winger has quickly cemented himself as one of Europe’s rising stars, and could soon find himself being the main man of a new look, youthful Italian national team.

Pietro Pellegri, Patrick Cutrone, Lorenzo Pellegrini and Andrea Conti are all impressing this season and could, alongside Chiesa, be starring for Italy at the 2022 World Cup if they continue developing at their current rate.

It's a bit like asking what makes some of the world's best today so special? They're all explosive. Not just physically, but mentally, too.

People often claim a player wouldn't be anything special without their blistering pace. But throughout history there have been countless players with an abundance of pace who aren't as quick in the mind. They weren't bad players but it shows having pace to burn doesn't automatically make you a better footballer.

Of course, speed helps in the modern game and Chiesa has it.

But it's his footballing brain, and how he seemingly sees two steps ahead of most, that really helps him to stand out. Coupled with his boundless energy and his desire to succeed, it's easy to see why so many of Europe's top clubs are keeping a close eye on his development. 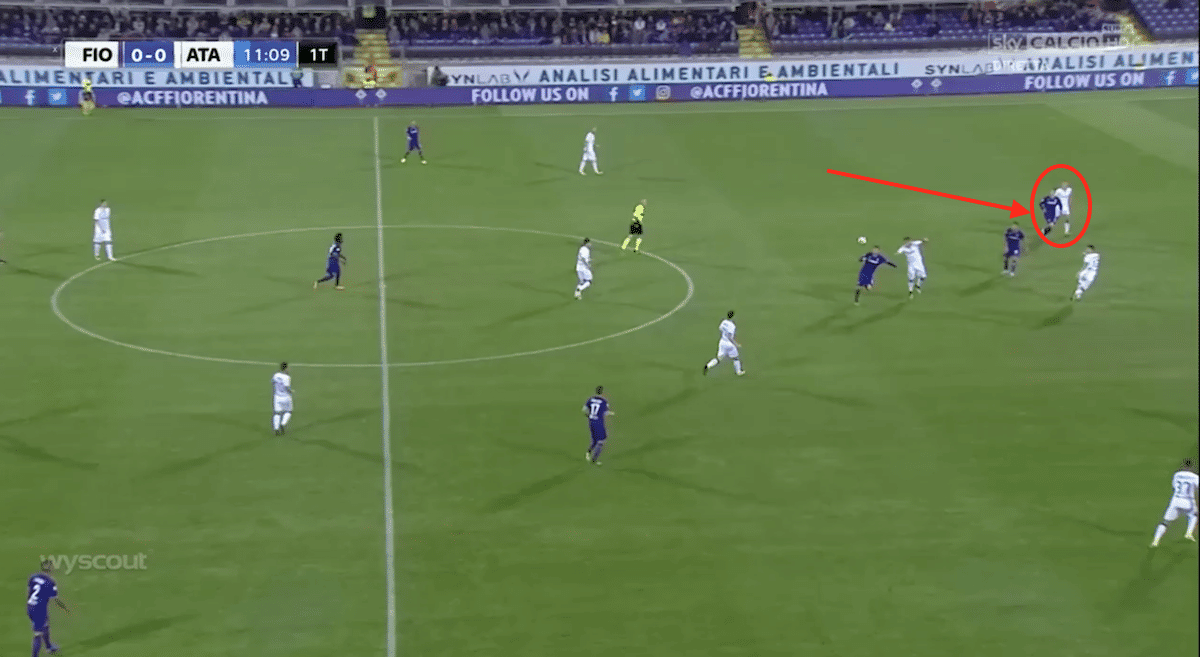 He showcased many of his strengths against Atalanta. The home side play the ball long and Chiesa drifts in field, showing anticipation, from his wide-left starting position. Cyril Théréau wins the header for Fiorentina and flicks it on but it loops up and bounces kindly for the away side's defenders.

However, Chiesa is on his toes and manages to poke the ball into the space before they're able to clear it. 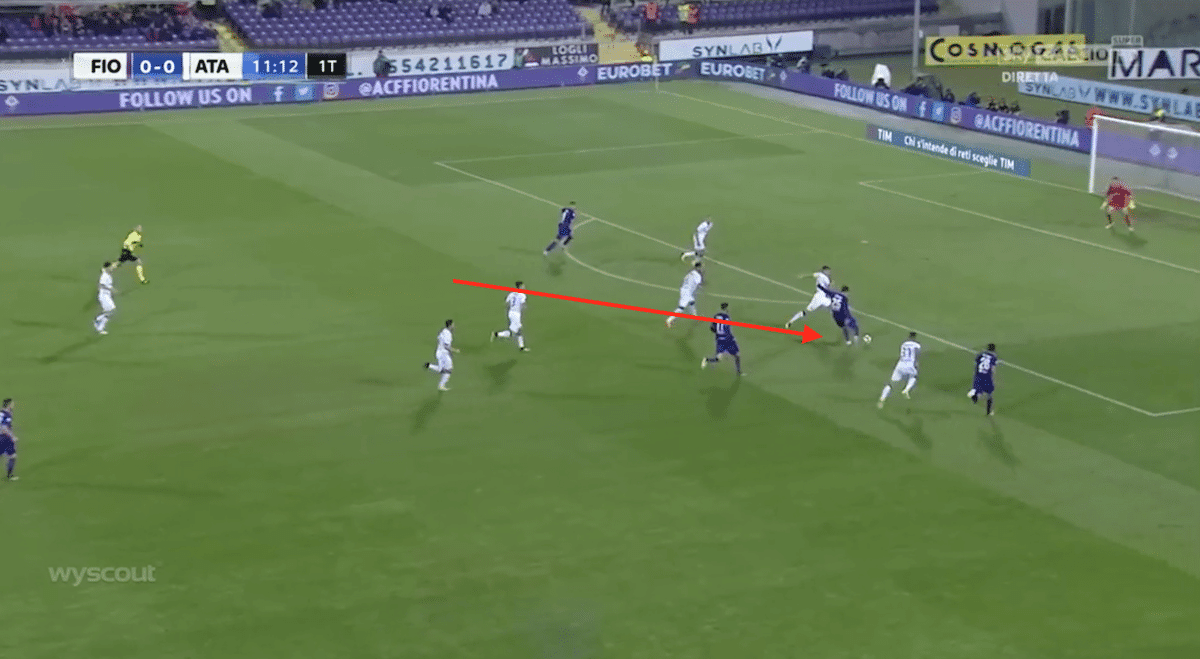 He continues his run across the face of the Atalanta goal before emphatically firing the ball home from the edge of the area. He was tenacious enough to win the ball when it was very much favouring the defender. He then took the shot early before the defender closest to him and the goalkeeper were able to set themselves properly.

It was a brilliant goal and owed nothing to his pace and everything to his quick thinking.

Like all highly-rated attackers these days, he's not shy about doing the dirty work. He's averaging 1.7 tackles and 0.5 interceptions per 90 minutes this season, showing he's switched on when it comes to the defensive side of the game. 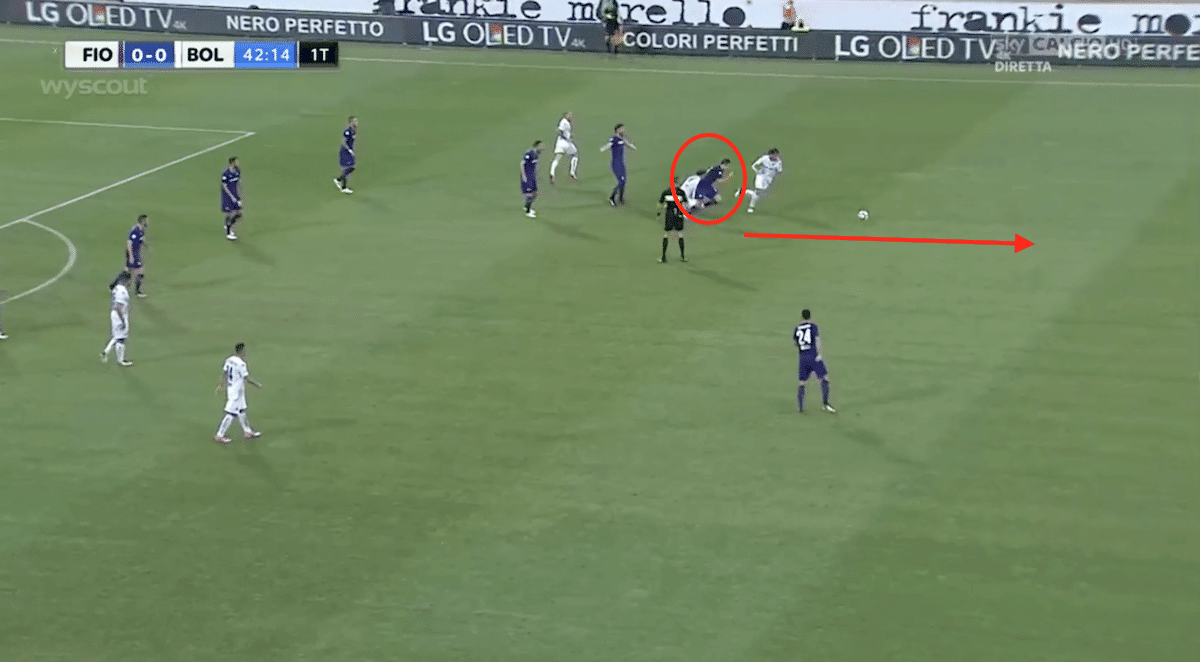 In the above picture you see Chiesa circled red. He's tracked back into his defensive third to help the home side keep Bologna at bay. The ball bounces loose and the Fiorentina man is the first to react. He could just play the ball to his team-mate closest to the bottom of the picture, but instead takes it on himself to drive the team forward. 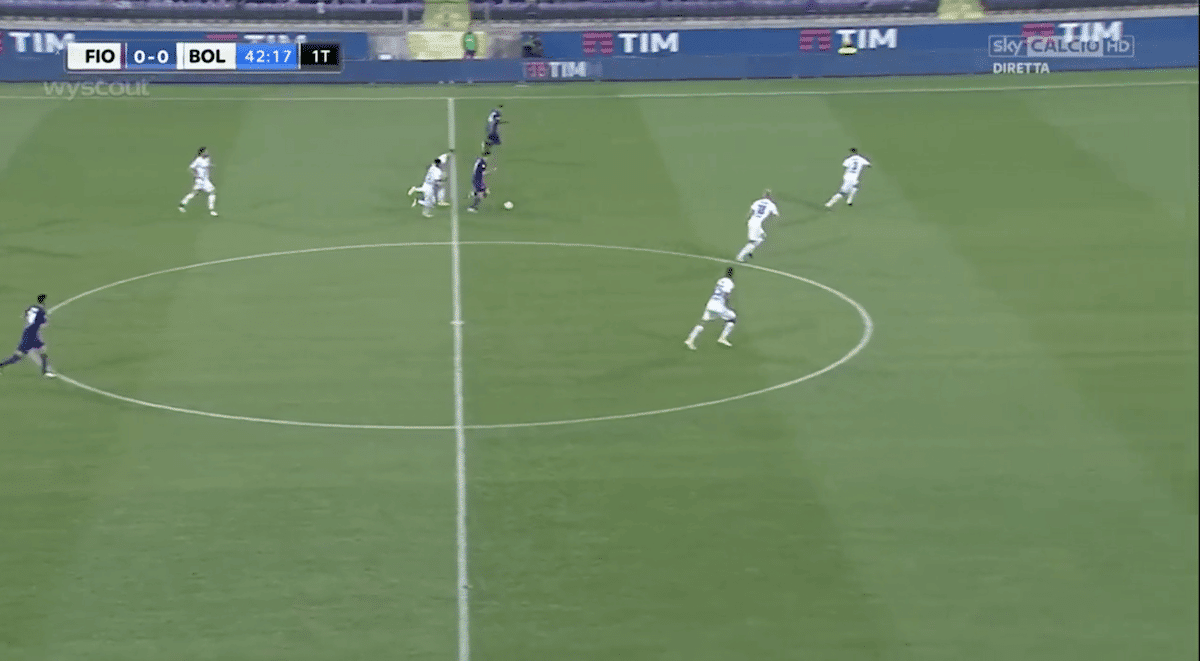 He's carried the ball into the away side's half and in the process taken three players out of the game. His quick change of direction enabled him to breeze past the two chasing players and now he's running at the three defenders.

He showed no fear and managed to turn a five on two situation into a three on two. That sort of confidence and aggression is what all top coaches want to see from their attackers. 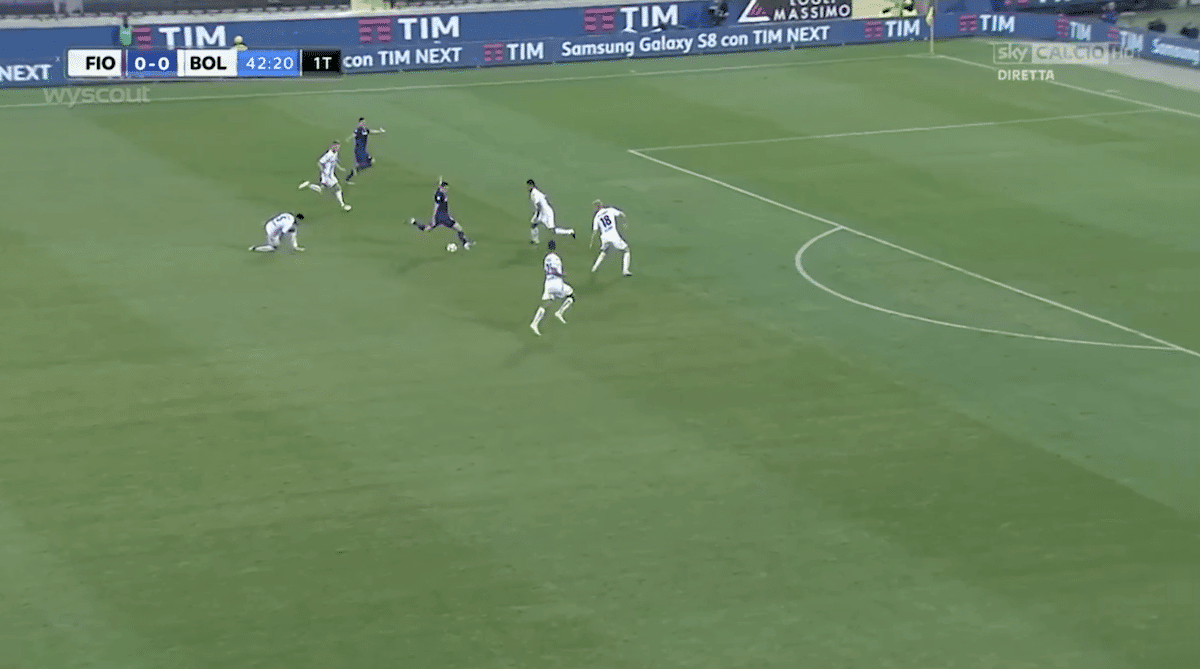 Chiesa's run comes to an end 30 yards from goal. His curled effort is weak and easily saved – he should have played the ball to his left to his team-mate but, due to a combination of inexperience and the impressive number of goals he's scored from distance, decided to shoot. His decision-making will no doubt improve the more time he spends on the pitch.

Chiesa has gone from his own penalty area to the opposition's in the space of six seconds, and this wasn't a free run – he had to waltz past players in his path.

But just from the one picture you see what Chiesa is all about: he petrifies teams and it's why five players are all scrambling to stop him. 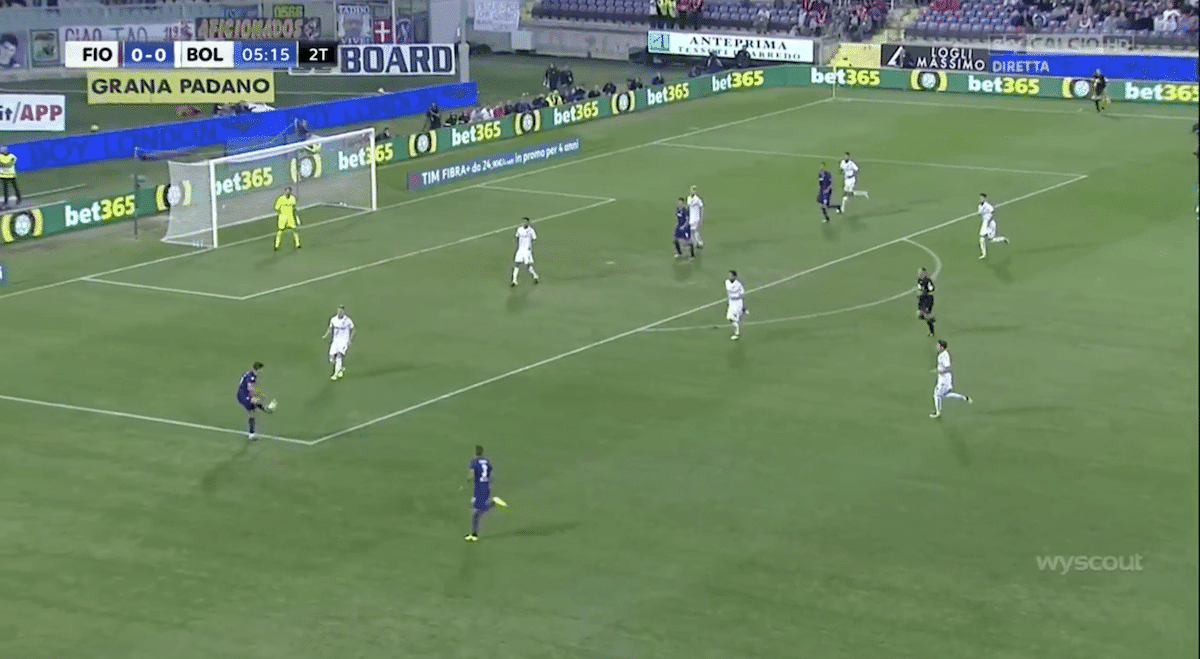 The goal he scored against Bologna was the sort top players score on a regular basis. It looked easy but it's far from it. A long ball is played into him to the left of the penalty area, as shown in the picture above, and he brings it under his spell. The away side know he's primarily right footed so look to clog up the central area to stop him doing so. 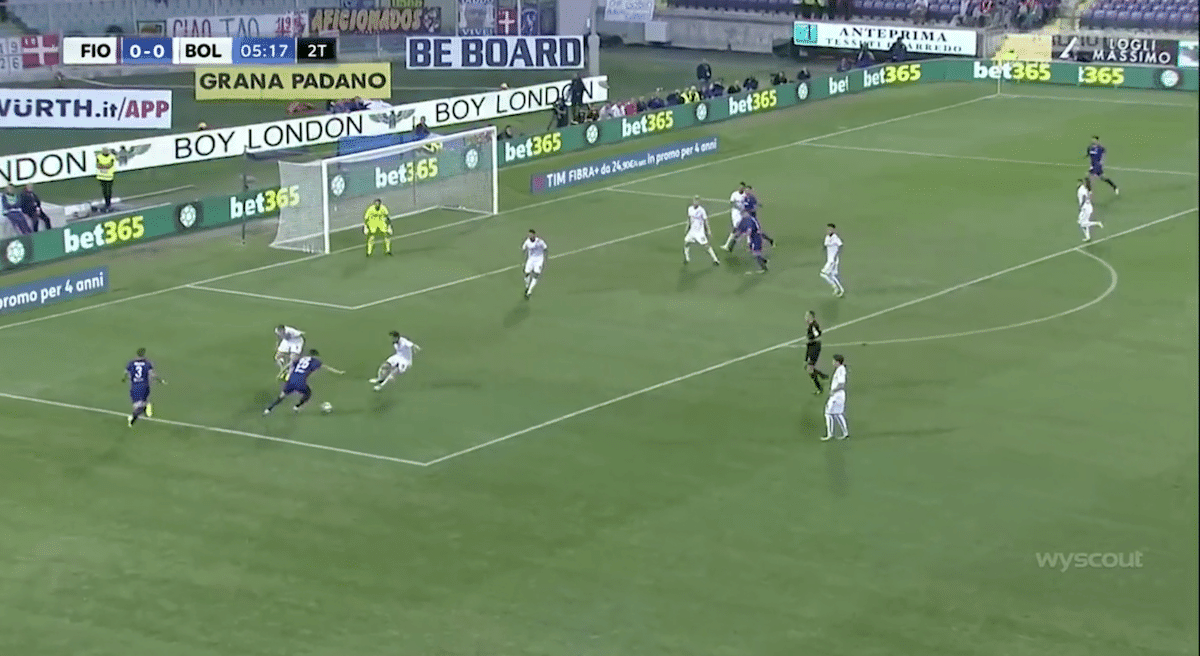 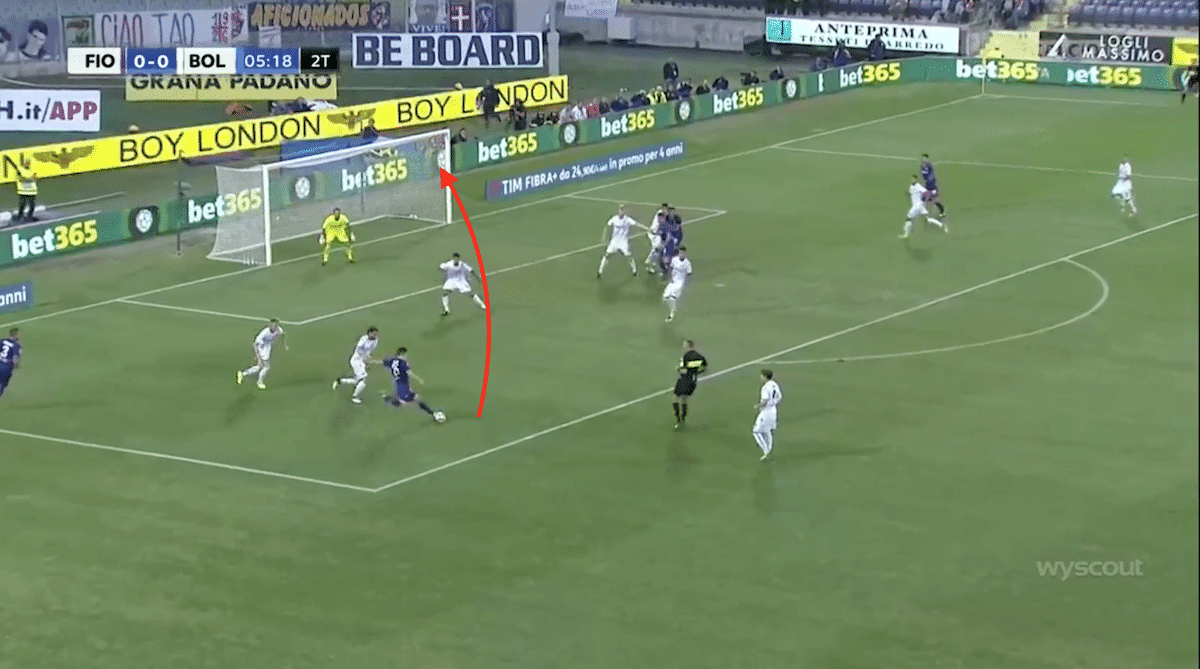 He feints to go down the outside, supported by the overlap, before quickly chopping back onto his right foot. He managers to carve out space in the penalty area before unleashing a curling effort into the top corner to put his side ahead. It's a moment of brilliance and something Arjen Robben has made a career out of doing.

The annoying thing for the opposition is they know what he's going to do but can't do anything to stop it. If Chiesa manages to master this move he's going to be a goal threat for the rest of his career.

He's already been named as a Liverpool transfer target, with the Reds rumoured to be ready to battle it out with Chelsea, Tottenham Hotspur, Roma, Inter Milan and Juventus for his signature. But Chiesa is likely to be fully focused on helping Fiorentina climb the table; it's going to keep him grounded and, in the long run, it'll be beneficial to his development.

It's too early to say that he'll definitely surpass his father's achievements as a player – over 300 top-flight appearances and Cup Winners' Cup and UEFA Cup winners' medals – but Cheisa has got every opportunity of becoming a name in his own right.