David Brooks didn't take the traditional route to becoming a football star but he's on the periphery of becoming just that. The 20-year-old has put in a series of eye-catching performances for Sheffield United over recent weeks, and Premier League clubs are regularly watching him in their droves.

The Daily Mirror have linked Liverpool and Tottenham Hotspur with £20million moves for winger who made his senior debut for Wales against France in a friendly earlier this month.

Despite being just four months into the 2017/18 season, it's been a life changing campaign for the Warrington-born wide man, who put in a Man of the Match display in the 4-2 victory over city rivals Sheffield Wednesday in what was just his 15th appearance for the club. The biggest game of his club career to date and he ran the show. He finished with one assist but could have had three.

He's topping the wish list of many Premier League managers but, unlike many in his situation, he may resist the urge to jump ship just yet.

Brooks started life at the Manchester City academy. After a decade there, however, he moved to Sheffield United to increase his chances of first-team football. Similar, in a way, to Jadon Sancho's decision to move to Borussia Dortmund in the summer.

Brooks is now getting the exposure he wanted all along and may be reluctant to move to a club offering him a place on the substitutes bench.

The Manchester United fan went backwards in order to go forwards. He left the glitz and glamour of a Premier League club and joined League One side Sheffield United. Manager Chris Wilder sent him on loan to Halifax Town during the 2015/16 season before giving him his chance the following season in the EFL Cup.

He made just the five appearances, none of which arrived in the league, as the club won promotion to England's second tier.

Not your stereotypical English attacker

It was during the summer of 2017 that clubs began to take note of just how good Brooks could be.

England won the Toulon tournament and Brooks was given the Best Player award. He dropped out of the Wales squad and it looked as though he has sworn his allegiance to his nation of birth.

However, last month he scored on his debut for the Wales Under-21 side in what can be described as a Lionel Messi-esque finish.

He scored a memorable goal in pre-season, one that Sky Sports dedicated a video to in recognition. He picked the ball up deep in his own half and showed great awareness to evade the player looking to press him. He then drives into the space ahead of him and just keeps going.

With three Chesterfield players in close proximity he works the ball onto his trusty left foot and calmly fires the ball home from 20-yards out.

It's not a goal people expect to see from an English player, what with his desire to run at the opposition and take them on, but at the same time, there are similarities to Brooks and three other players from the north west of England.

There's a bit of Steven Gerrard, Wayne Rooney and Ross Barkley about him.  His ability to make something happen out of nothing, as well as his drive when in deeper areas of the pitch, just screams Gerrard and Rooney while his slaloming runs to get the better of the opposition is eerily similar to that of Barkley.

Like all three of the aforementioned players, he's got the desire and the hunger to win. He's not just there to take part. He's one to get involved in the dirty work. You regularly see him racing back to help out his defence and it's probably to his detriment at times but he does it anyway. Furthermore, he's not shy about putting in a tackle.

That's the all-action side to his game without the ball. What really makes him special, and what helps him stand out amongst his peers, is when he's in possession.

The way he manipulates not just the ball but the opposition as well. His close control, his vision and his technique allow him to dictate proceedings in the final third.

His assist against Sunderland looked effortless. 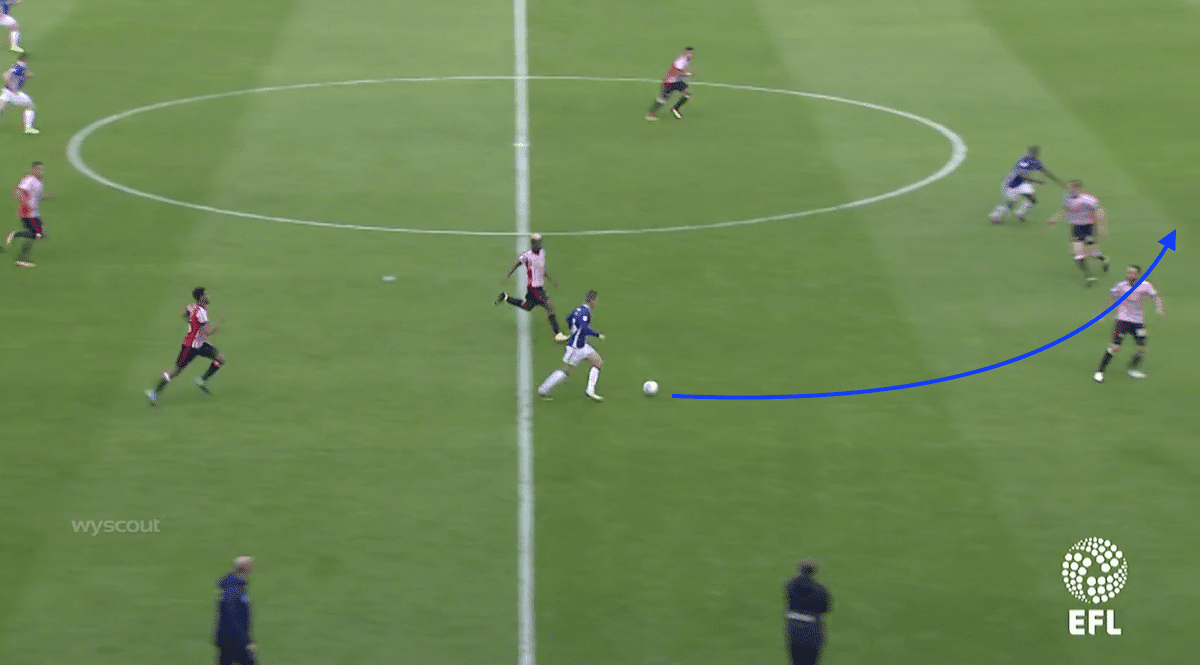 He picked the ball up just inside his own half and carried it forward. In the picture above you see Brooks in possession with only one Sheffield United players ahead of him. The Sunderland players are positioned to show him down the right onto his weaker foot.

But with one deft flick of his left peg he cuts across the ball and plays it between the two Sunderland players and into the path of Clayton Donaldson who fires the ball home. Plenty of players can spot the pass but how many can execute it this well? He makes a mockery of the home side thinking they're in control of the situation.

Someone of his experience shouldn't have the composure he has. 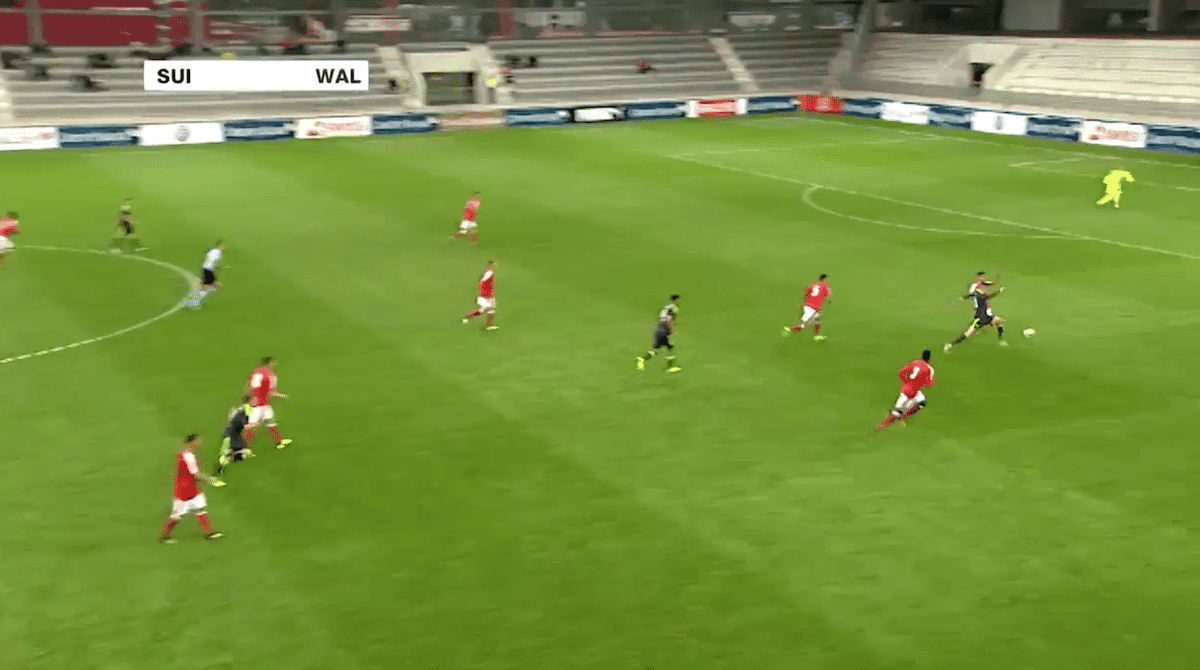 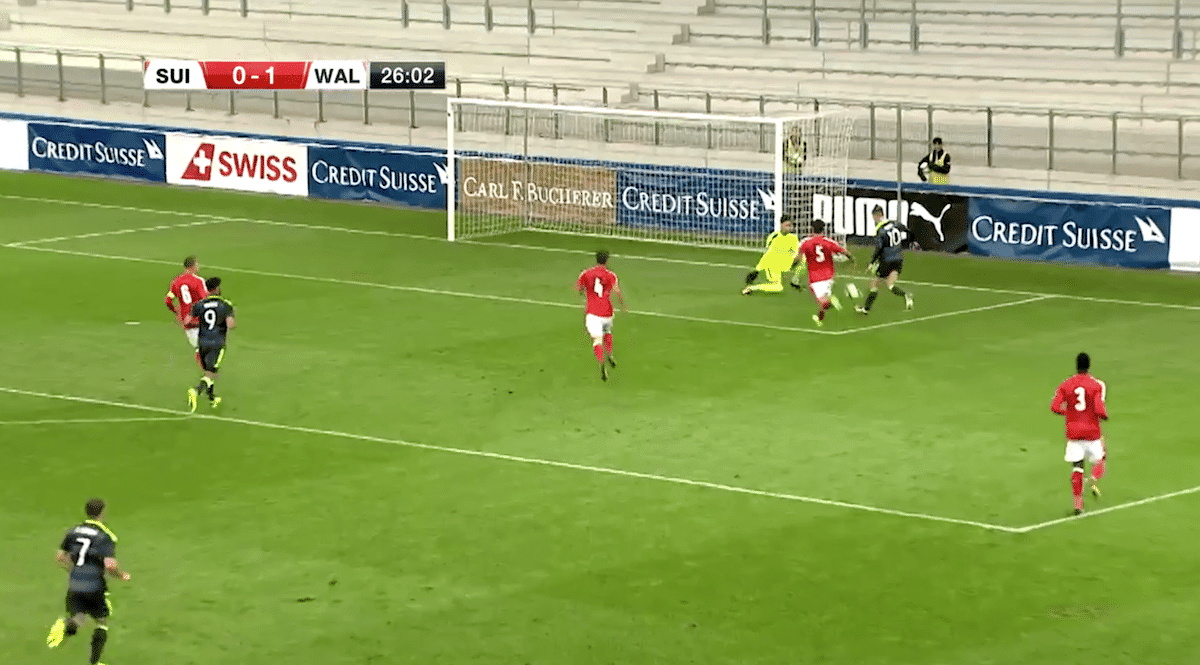 It was on show against Switzerland. In the picture above you see Brooks tussling for the ball. He shrugs off the defender and then rides a challenge to burst into the penalty area. He's on his own and the defender is showing him the line, cutting off the opportunity to cut back onto his left and curl the ball home.

Brooks, unflustered as ever, simply slows the play, sits the goalkeeper down and dinks the ball over him into the far corner. Many in that situation lash at the ball and the chance goes begging, but not the Sheffield United man. It's a finish of supreme confidence and one you associate with the likes of Messi, Philippe Coutinho – who scored one similar against David De Gea –  and players of that quality.

Of course, confidence plays a part and Brooks will no doubt be on cloud nine, but the technique has to be there for him to be able to do it. It's why so many top teams are watching his progress intently.

If he continues on the way he is there will be plenty of regrets at Manchester City, and England may rue not making him a full international before Wales, who as a nation can now call upon the talents of both Brooks and Ben Woodburn.

Club manager Wilder wants to build the team around the 20-year-old sensation but it's unlikely the South Yorkshire team could turn down a bid of £20million for Brooks if one did arrive. Make no mistake about it, he's talented enough to be lighting up the Premier League and may well be in the very near future.