Over the past few seasons Europe has lost a number of its most famous playmakers. Xabi Alonso and Andrea Pirlo hung up their boots while Xavi and Michael Carrick called it a day at the end of the 2017/18 campaign. Andrés Iniesta is also winding down now and will leave Barcelona this summer.

With so many creative forces calling it a day there's an opportunity for others to step up and make a claim for the title of Europe's best playmaker.

With this in mind, we've taken a look at players aged 21 and under with the most open play key passes per 90 this season. This helps gives an idea as to which players are regularly creating opportunities for team-mates. It helps identify players with the vision and the ability to execute these passes. However, to make the list they have to have appeared in at last 1,000 minutes in the league. 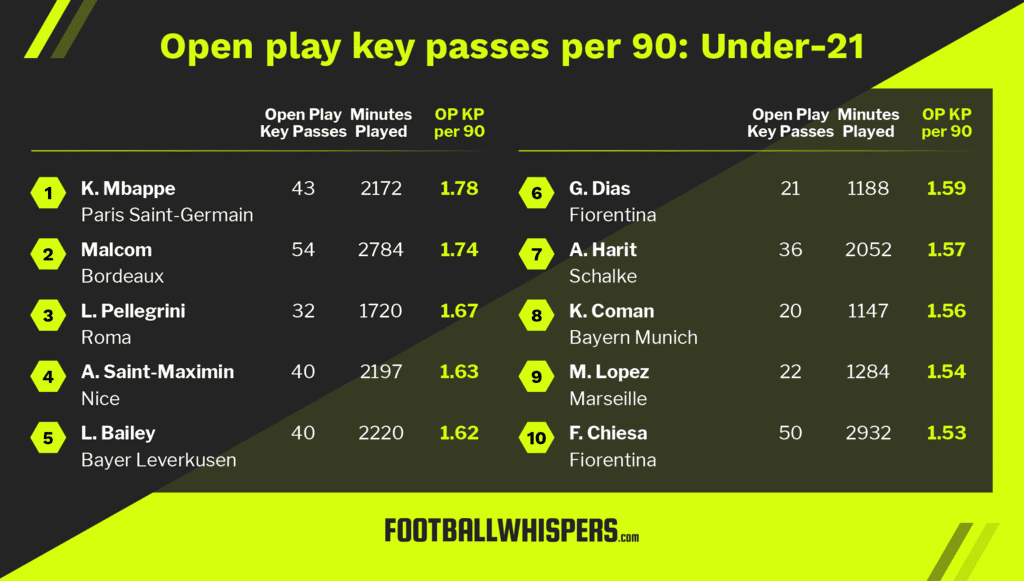 The likes of Kylian Mbappé, Malcom, Leon Bailey and Kingsley Coman are names many would expected to see on this list.

Mbappé is one of the most gifted players around right now and he's playing in one of the best forward lines in the world at Paris Saint-Germain. He's going to be playing key passes on a regular basis. Malcom, subject of Liverpool transfer rumours, is a star for Bordeaux. Everything good that the Ligue 1 side do goes through the Brazilian.

Manchester City transfer target Bailey had his breakout season. He was involved in 18 goals for Bayer Leverkusen last term, setting up nine, and put his vision to good use with 1.62 open play key passes per 90.

Bayern Munich Coman is turning out for the best team in Germany in a pretty loaded forward line. Playing for a team like Bayern only encourages creativity.

There are, however, a number of intriguing names on the list. Lorenzo Pellegrini signed for Roma last summer and is reportedly on Juventus‘ radar. He ranks third on the list with 1.67 open play key passes per 90, 0.04 more than Allan Saint-Maximin. Monaco sold a lot of players last summer but perhaps their strangest decision was to sell the French under-21 international. He's been sensational for Nice this term registering seven assists.

Gil Dias is on loan with Fiorentina from Monaco this season. Though he's not been a starter throughout, he's made the most of his opportunities on the pitch and plays 1.59 open play key passes per 90. The Ligue 1 side may have lost a creator but in Dias they have a player who can pull the strings.

Amine Harit was made into an integral part of the Schalke team by Domenico Tedesco and he's thrived being the man to link the play for the Bundesliga runners-up. Likewise, Maxime Lopez has shone for Marseille but has not been lavished with the same praise Florian Thuavin or Dimitri Payet have. In the 20-year-old, the Ligue 1 side has a pretender to the former West Ham United maestro's crown.

Federico Chiesa has been a revelation for Fiorentina alongside Giovani Simeone in attack. Reports suggest he'll be heading to Inter Milan this summer but La Viola should do all they can to keep the son of a club legend.

All have the potential to go on to be Europe's next great playmaker. Whether they fufil their potential depends on what career moves they make. However, be sure that Europe's elite clubs will be keeping a close eye on these future stars.