Transfer deadline day has arrived. Although the Premier League and Serie A transfer windows have been shut for some time, most of Europe still had until August 31 to get their business done and strengthen their squads ahead of the new season.

This summer hasn't quite lived up to last year, with Cristiano Ronaldo's £100million move to Juventus from Real Madrid dominating most of the headlines in June.

There have, however, been a raft of other intriguing captures across the continent, some of which have flown under the radar because of the World Cup.

Here, we round up eight of the most eye-catching deals in European football this summer.

Just as the World Cup was kicking off in Russia, Atlético announced that the French winger had agreed to join the club from Monaco.

The announcement came almost immediately after Antoine Griezmann agreed to extend his contract at Atleti amid growing Barcelona transfer rumours, making for a one-two punch of great news for the Europa League winners.

Lemar, strongly linked with a move to Liverpool and Arsenal last season, is a wonderfully gifted player, bringing speed and creativity to the Atlético frontline. The 22-year-old can also operate anywhere across the midfield or even as a makeshift wing-back.

The Guadeloupe-born flyer was part of Leonardo Jardim's slick Monaco side that reached the Champions League semi-finals in 2016. Over the last two seasons, the former Caen starlet scored 11 goals and notched 19 assists for Monaco, creating a total of 26 ‘big chances' (fifth in Ligue 1) while boasting an xA of 10.81.

He should be an excellent addition to Diego Simeone's side.

The Rossoneri have made a clutch of intriguing signings as they try to improve on last season's sixth-place finish in Serie A.

Samu Castillejo has been signed from Villarreal, Tiémoué Bakayoko has arrived on loan from Chelsea while the strikeforce has been significantly enhanced by the captures of Croatia's World Cup rebel Nikola Kalinić and Gonzalo Higuaín, the latter of whom has come on loan as part of the deal which saw Mattia Caldara join with Leonardo Bonucci heading back to Juventus.

But the £12.5million signing of Laxalt could prove to be one of the club's shrewdest acquisitions. The 25-year-old left-back played 90 minutes in three of Uruguay's five World Cup games over the summer, impressing in the 2-1 last-16 win over Portugal.

Laxalt failed to make an impact at Inter following his move from Uruguay in 2013 but, following an impressive three-year stint at Genoa, he seems primed for some Milanese redemption.

Immediately prior to his move to Spain, Kondogbia went viral for the wrong reasons after an astonishing own-goal for Inter in a pre-season friendly against Chelsea, lobbing his goalkeeper Daniele Padelli from 45 yards.

Thankfully from Valencia's perspective, that display of comic ineptitude proved not to be a grim premonition of Kondogbia's dramatic regression as he shone at the Mestalla, scoring four goals and adding four assists. He also managed 55 successful take-ons; a reflection of the drive he offers in central midfield.

Securing Kondogbia's services on a four-year deal after exercising his buy-out clause was a smart move from Valencia. The 25-year-old will feature in the club's attempt to qualify from Group H in the Champions League, which sees them pitted against Juventus, Manchester United and Young Boys.

Following an impressive three-year spell with Sevilla, N'Zonzi was strongly linked with a move to Arsenal, a move which would have seen him reunite with Unai Emery (the pair won the Europa League together in 2016).

But it was Roma who snapped up France's World Cup winner in a deal worth £27.3million, part of the Giallorossi's extensive recruitment drive under sporting director Monchi, which has included notable arrivals such as Justin Kluivert, Javier Pastore, Gregoire Defrel and Davide Santon.

There have been several departures from the Stadio Olimpico, however, including Radja Nainggolan, who joined rivals Inter. N'Zonzi will be the Belgian's replacement in Eusebio Di Francesco's midfield as the club try to replicate their run to last season's Champions League final and challenge for the Scudetto after finishing third in Serie A last season.

N'Zonzi will certainly help. The 29-year-old won 4.18 aerials per 90 last season and averaged 66 passes per game too, so he should offer Roma physicality and tempo in the centre.

Charged with the unenviable task of replacing Jorginho in the Napoli midfield, Ruiz arrives at the Stadio San Paolo on the back off a stellar campaign with Real Betis, in which he helped the club finish sixth and qualify for the Europa League.

But Napoli will be a step up, with Ruiz and his new teammates set to face Paris Saint-Germain and Liverpool in a formidable Champions League Group C.

Ruiz will be an important part of Carlo Ancelotti's Partenopei. For Betis last season, the 22-year-old Spaniard averaged 2.87 tackles per 90, the most of any midfielder in La Liga and also boasted 1.41 interceptions per 90.

A smart-passing, tactically astute midfielder, Ruiz may need time to settle in Naples but, when he does, he can be as influential as his predecessor in the club's midfield.

Bayern Munich have had an unusually quiet summer. The Bavarian giants won the race to sign Leon Goretzka from Schalke on a free but haven't added any other established players.

They did, however, sign Davies, the 17-year-old Canadian who lit up Major League Soccer after breaking into the Whitecaps first-team at the age of 15.

Davies' sale to Bayern was hailed as a landmark moment for the MLS as such a special, homegrown talent earned a move to one of Europe's elite. There was, however, a tinge of sadness in North America, seeing him leave so soon and, having caught glimpses of his searing pace and skill, it's easy to see why.

His rise from a Ghanian refugee camp to the Champions League has the makings of a footballing fairy-tale. Hopefully, the teenager can fulfill his immense potential and sparkle in Bayern's attacking line.

An exciting talent on his way out of Germany, however, is 21-year-old centre-back Kehrer, who joined PSG on a five-year deal for £33million.

The Germany Under-21 captain boasts enormous potential. Like Goretzka and Manchester City star Leroy Sané, he is another to have sprung from Schalke's spectacular talent factory, and he looks to be another blazing an unstoppable trail to the pinnacle of the professional game.

Kehrer cemented his place at the heart of Schalke's defence last season, averaging 3.12 tackles per 90 and 0.41 open play key passes per game.

Kehrer also featured prominently during Germany's UEFA European Under-21 Championship triumph. His stellar showings in Gelsenkirchen last season have earned him a first call-up to Die Mannschaft from Joachim Löw for Germany's upcoming internationals; France in their opening UEFA Nations League match and a friendly with Peru.

PSG boss Thomas Tuchel will have been aware of Kehrer from his days as Borussia Dortmund coach and will look to shape the youngster into an elite defender as he attempts to take Les Parisiens to the top of the European game. 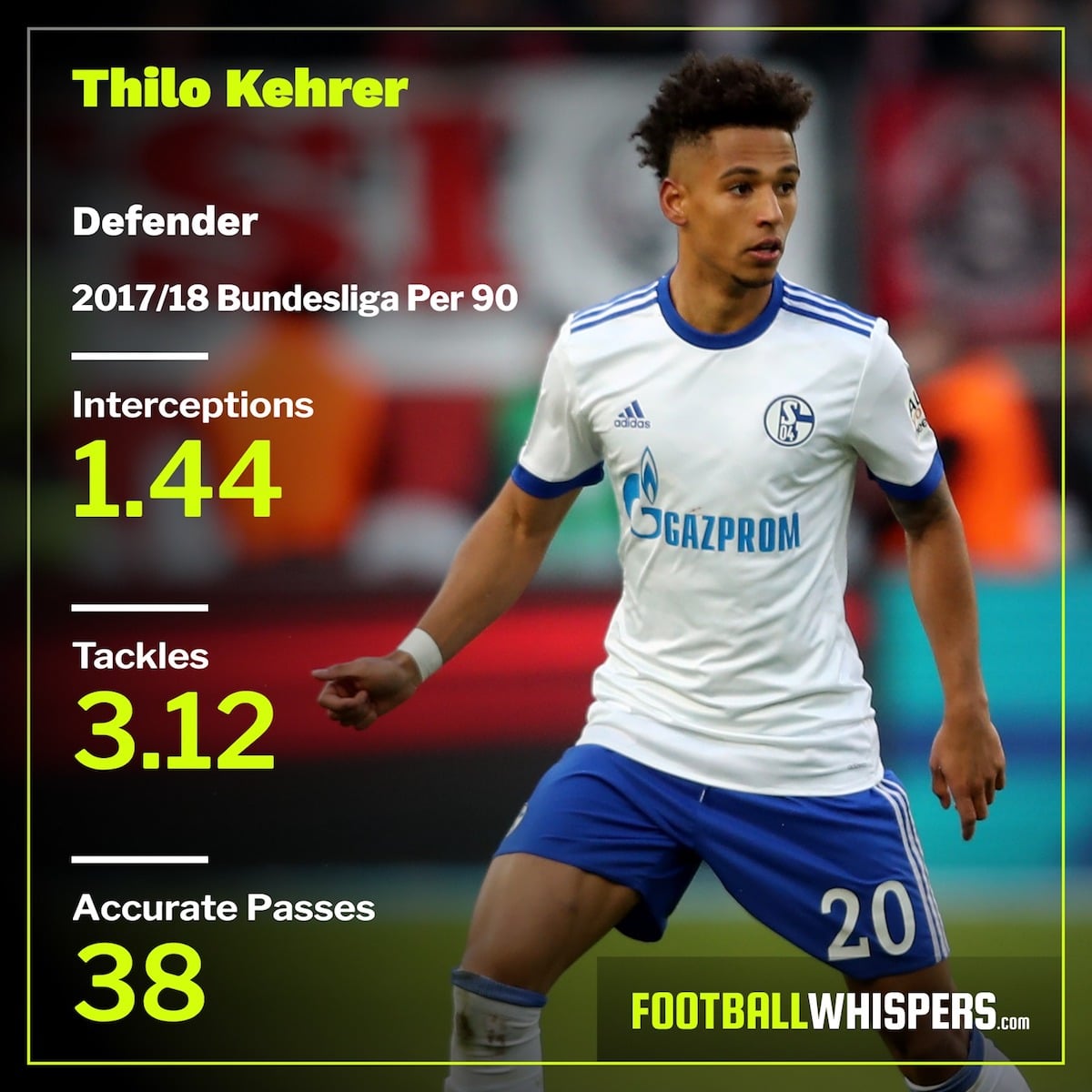 The 22-year-old playmaker had been linked with moves to England and Italy but ended up joining Monaco, with last season's Ligue 1 runners-up in need of creativity following the departures of Lemar and João Moutinho, who joined Wolves.

Golovin was one of the best players in the Russian league last season; second in successful take-ons and third in open play key passes per 90.

The consensus is Golovin still has areas in which to improve if he is to become one of Europe's finest playmakers but working under Jardim, one of the most revered tacticians, should do him the world of good.