It sounds like a transfer straight out of the popular computer game Football Manager, but Wigan Athletic defender Antonee Robinson really did almost sign for seven-time European champions Milan.

The 22-year-old was expected to join the Rossoneri to replace Swiss international Ricardo Rodríguez following his move to PSV. Robinson would have played back-up to Theo Hernández initially but the hope was he would compete with the former Real Madrid defender in the long-term.

That was until disaster struck. Having touched down in Milan, Robinson was informed the transfer could not go ahead due to medical regulations. And so ended one of the most bizarre deals of the 2020 January transfer window.

Moving to San Siro, the home of the 18-time Serie A champions, is a world away from a Championship relegation battle with the Latics. But that could have been Robinson's new reality.

The question is why were a club as illustrious as Milan, with their relative wealth, bulging trophy cabinet and prestige, shopping in the second tier of English football? 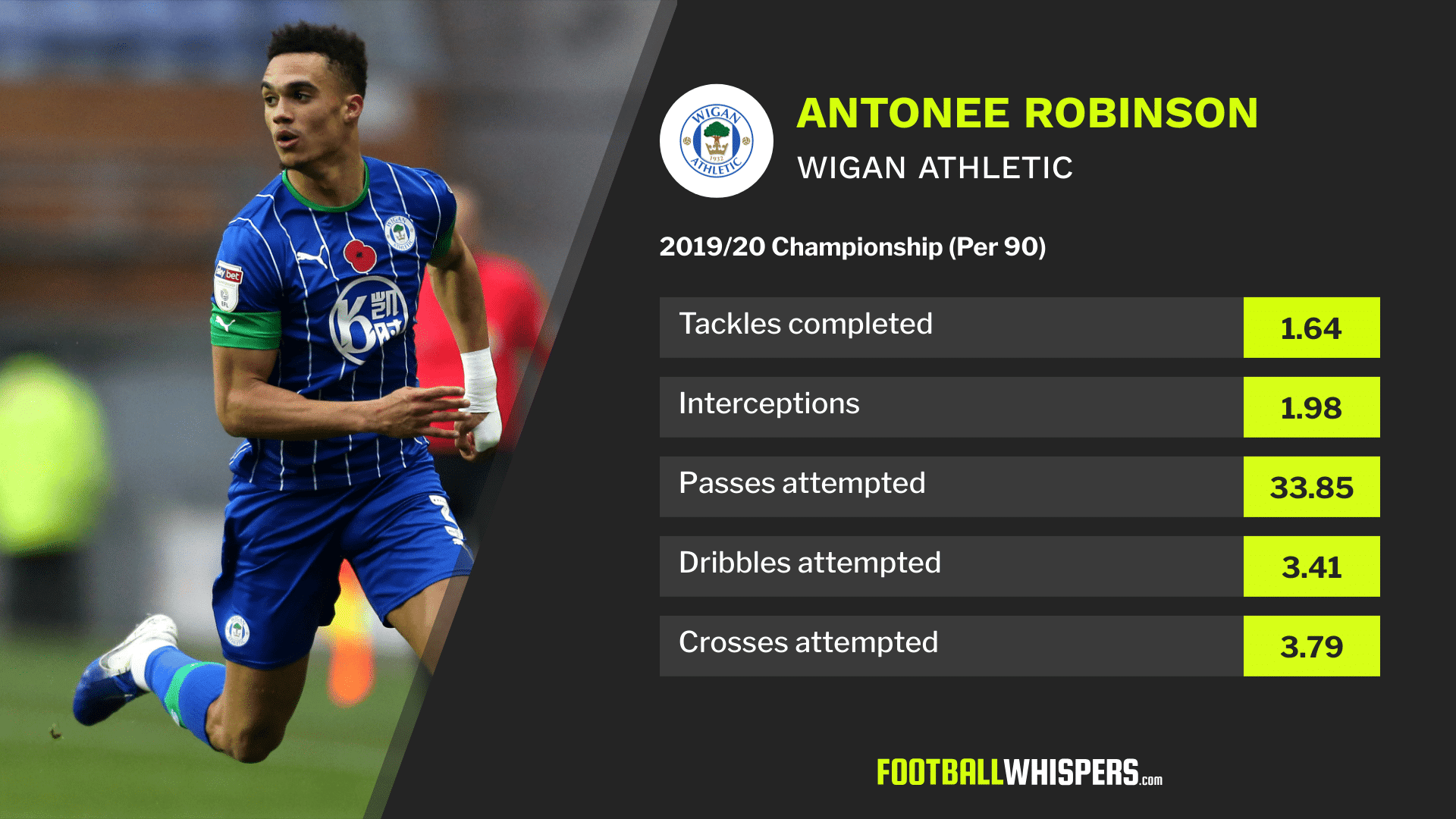 The answer almost certainly has something to do, in part, with where the Rossoneri find themselves in 2020. But Robinson also has a fairly unique skillset.

It's a prerequisite for full-backs in all systems to be comfortable carrying the ball forward and joining in the attack. But Robinson is more adept at running at defenders than most attackers. When he gets on the ball, gets his head down and hits top speed, he's more like an old-fashioned winger than a full-back.

Comfortable driving inside or going down the line, the Milton Keynes native is one of Wigan's most important attacking outlets. It's no surprise more of the Latics' attacks (38 per cent) are directed down the left than the right or through the centre.

This season, Robinson, who is a full USMNT international as his father is American, has attempted the second-most dribbles of any Championship full-back, 3.4 (per 90), completing 1.98 (per 90) which ranks him third among his peers.

Tall, quick and athletic, his rampaging runs cause panic among opposition defences, drawing plenty of fouls, pulling teams out of shape and getting into the penalty area with regularity.

There's an end product to all Robinson's lung-busting runs, too. He ranks 12th in the Championship for completed crosses by a full-back with 0.83 (per 90) and also takes 1.42 touches in the opposition's box (per 90).

What makes Robinson's sudden ascent even more remarkable is the fact Everton sold him to Wigan for just £1.3million last summer. Having impressed on loan at the DW Stadium last season, he make the switch permanent in July, signing a three-year contract.

Fast-forward less than six months and he looked set to join European royalty. Far from being disappointed at losing an important player, Wigan boss Cook was thrilled for Robinson.

“Until it goes through, we won’t comment a lot, but we’re delighted for the kid,” Cook said. “He’s an absolute diamond of a young man, he’s one of our leaders in the dressing room and it’s great to see his development over the 18 months he’s been with us.”

Milan legend Paolo Maldini set the bar when it comes to left-backs in the modern era. Robinson will hope he gets the chance to pull on the same famous red-and-black jersey the Italian once wore with such distinction.