Few sights in football are as thrilling as wingers flying past their opponents.

Not every player is blessed with the pace or agility to leave markers in their wake, but those who are can use it as a deadly weapon.

We've seen some electrifying wingers over recent years. For most successful take-ons since August 2016, Eden Hazard, Lionel Messi and Neymar populate the top of the list. The likes of Wilfried Zaha, Raheem Sterling and Hakim Ziyech also feature highly, too.

So here, we look at the ten most effective ‘wonderkid' dribblers – aged 23 and under – for the 2018/19 season based on successful dribbles per 90 minutes. Our only stipulation is that they have played at least 1000 minutes.

The France U21 international found breaking into the Inter Milan team difficult but has been given a chance to flourish on loan at Bordeaux this season.

The 20-year-old has made 21 appearances – 13 of which have been starts – and has scored three goals.

Blessed with excellent pace, Karamoh is a natural dribbler, attempting 5.84 take-ons per 90, completing 3.28 (he's ranked third in both attempted and completed dribbles per 90 for Ligue 1 forwards).

It hasn't all been good for Karamoh, though. In February, Bordeaux suspended him due to “unacceptable behaviour”. Expected back at Inter in the summer, he clearly has some maturing to do before he reaches the highest level.

Another Ligue 1 flyer, the former Arsenal man has established himself as one of the most exciting rising stars in French football.

A regular in the starting XI, he was forced to wait until April for his first goal of the season, but he ended his drought spectacularly, with three in two games.

In the 3-3 draw with Rennes, he scored twice and set up the other for Stéphane Bahoken. Operating on the right wing of a 4-3-3, Adélaïde was devastating. Still with much to learn, his star is most certainly on the rise.

Football is cruel sometimes. Even, as it turns out, to the sons of legends. Marcus Thuram, son of France legend Lilian, has been excellent for Guingamp in Ligue 1 this season, scoring eight goals for Jocelyn Gourvennec's side.

However, the campaign ended in despair. Drawing 1-1 with Rennes, Thuram missed a 92nd-minute penalty which confirmed Guingamp's relegation.

Although immensely painful, such incidents can make young players stronger. Guingamp will battle it out in Ligue 2 next season but there is a chance Thuram won't be around come August, with Lyon reportedly interested in his signature.

He ranks second in dribbles completed but also first in defensive duels won for Ligue 1 strikers with 290. That penalty miss may stay with him, but he still has a big future ahead of him.

The Frenchman, who celebrates his 22nd birthday on Wednesday, has endured another frustrating, injury-hit season with Barcelona.

However, despite having started only 20 La Liga games, he has still contributed eight goals and five assists.

An explosive presence on the flank, there are few who can terrorise full-backs quite like a fully fit and in-form Dembélé. 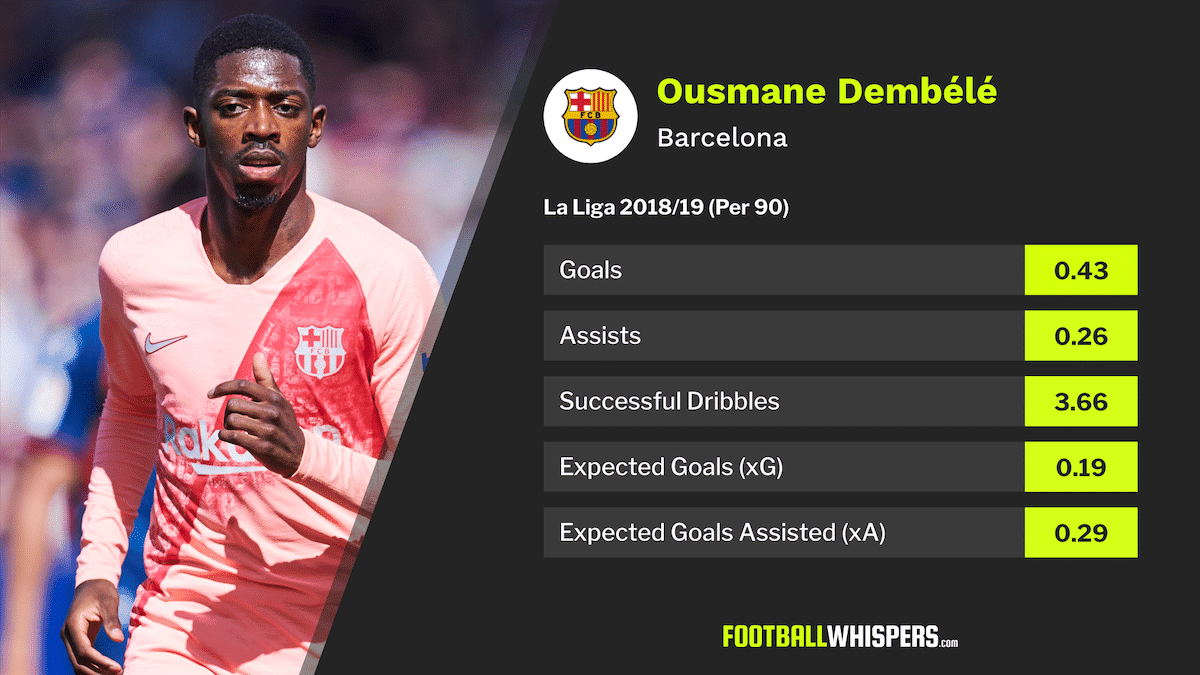 Currently nursing a torn hamstring, the former Borussia Dortmund starlet hopes to enjoy an uninterrupted run in the team next term.

As well as completing 3.66 dribbles per 90, Dembélé boasts the best open-play goals-xG ratio in La Liga and is ranked second in expected assists per game. Dangerous and hugely effective, Barça fans will hope to see even more of him next season.

Rayo Vallecano didn't have much to shout about this season. They will play their football in the second tier of Spanish football after being relegated from La Liga.

However, José Pozo, the former Real Madrid and Manchester City youngster, at least give fans some excitement. The 23-year-old scored a beautiful goal against Barcelona in November and boasts a remarkable dribble hit rate, having completed 62 of his 84 attempts.

Interestingly, all three of his goals this season were scored from outside of the box. We wouldn't be surprised if Rayo struggled to hold onto him this summer.

Sometimes, you just have to let the clip do the talking.

That most certainly should have produced an assist. Regardless, the scintillating Algerian has enjoyed a productive campaign with Nice, scoring six goals including a hat-trick against Guingamp.

Comfortable operating at full-back or higher up the pitch, Atal has attempted an astonishing 183 dribbles in Ligue 1 this season, completing 90 (3.89 out of 7.91 per 90).

He has also won more defensive duels than any other player with 245. Speedy, versatile and tenacious, Atal may be hot property this summer.

It's hard to believe Coman is still only 22. Having broken through as a raw teenager at Paris-Saint Germain, he has always seemed to be on the verge of being a truly great player at Bayern Munich.

He's had his problems with injuries, of course, but we're yet to see him dominate for Bayern in a manner that elevates him to the status of outgoing legendary pair Franck Ribéry and Arjen Robben.

But the 22-year-old Frenchman is still incredibly dangerous. Not only has he averaged four successful take-ons per game during the 2018/19 Bundesliga campaign, but he has also created seven big chances, notching four assists. He's also added five goals as Bayern close in on their seventh successive German crown.

Like his compatriot Dembélé, Coman has missed a fair chunk of this season. Hopefully next season we can see him blossom into one of the world's most consistent attacking players.

Borussia Dortmund may fall just short in their quest for Bundesliga supremacy, but Sancho has enhanced his reputation tenfold.

The 19-year-old has enjoyed a stellar campaign, with his 11 goals and 14 assists – the latter a league-high – contributing to Lucien Favre's side's title push.

Sancho has both attempted and completed more dribbles than any other Bundesliga midfielder this term, with 178 and 107 respectively. He also ranks third for total xA with 7.81.

With an exciting future ahead of him for club and country, Sancho has been linked with a big-money move to Manchester United. That seems unlikely though given the Red Devils' failure to qualify for next season's Champions League.

The likelier scenario is that Sancho continues with Dortmund. Already one of the most skilful and creative young players on the planet, the sky's the limit for the former Manchester City youth star. 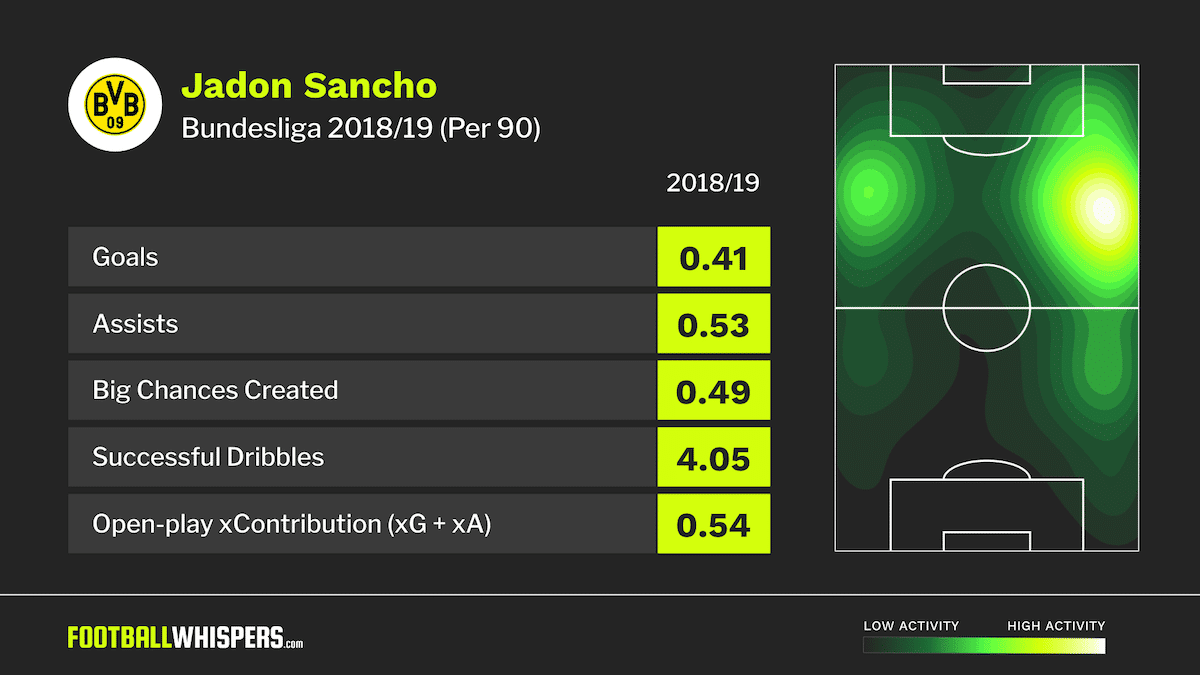 That clip of Atal tearing defenders apart only for his teammate to hit the crossbar above? That teammate is Allan Saint-Maximin. While that particular piece of footage may not paint the 22-year-old in the most clinical light, he's ably built on his breakthrough season last year to become one of Ligue 1's hottest properties.

A former Liverpool transfer target, Saint-Maximin was the subject of AC Milan interest in January.

His 134 completed dribbles in Ligue 1 this season make for a per 90 average of 4.38. Only Hatem Ben Arfa and Neymar can better that.

The former Monaco man has scored six goals and added three assists to make for an impressive second year at Nice. Widely tipped to complete his move to Milan in the summer, he has the talent to take Italy by storm next season.

Maybe not the name most people would have expected, Boga's per 90 average of 5.23 is hugely impressive – and untouchable for U23 players who have played more than 1000 minutes (Adama Traoré's average is 6.55 but he only featured in 892 minutes of action for Wolves this season).

A former Chelsea youth academy star, Boga joined Sassuolo last summer and has become one of the most efficient dribblers in Italy.

His three goals have helped Sassuolo stay around mid-table in Serie A this year.

Having started 12 games this season, Boga hopes to continue on an upward trajectory and perhaps become the one that got away from Chelsea.