The summer bonanza of football is fast approaching and fans from across the continent will be hopeful of seeing their team crowned kings of Europe. While all 24 representative will be dreaming of the ultimate glory, there’s a small handful of countries that will be more optimistic than most. Roy Hodgson’s England sit firmly in that category.

There’s no question that England are regarded as one of the European big boys. Sadly, that promise has rarely transformed into reality; supporters from the home of football are acclimatised to failure after generations of failure and this year’s tournament will signal the 50th anniversary since the nation’s one and only major trophy. In fact, it’s now been 20 years since the Three Lions reached the semi-finals of European Championships. Nonetheless, as Baddiel and Skinner belted out in their iconic anthem ahead of the last tournament held on French soil in the summer of 1998, we still believe.

Those feelings of optimism had somewhat faded after the death of the perceived Golden Generation. The post-Sven Goran Eriksson era has been largely dominated by even greater heartache than ever before. Incredibly, the Three Lions didn’t even qualify for the tournament eight years ago during Steve McClaren’s infamously tumultuous reign. A hammering from Germany in South Africa, followed by further disappointments in Ukraine and Brazil signal one of the worst decades in the national team’s history. But there is a glimmer of hope as Roy Hodgson’s men look to channel the spirit of ‘66 to emulate the country’s greatest ever team.

Two years ago, Hodgson’s willingness to trust his young and upcoming stars backfired spectacularly. The Lions looked like cubs in Brazil; a combination of toothless attack and naïve defence saw England crash out at the group stage in humiliating circumstances. For the first time ever, the campaign was over after just two matches as Luis Suarez pounced on a side that had already been wounded by an opening defeat against the Italians. If anything else, a sleep-inducing stalemate with Costa Rica only compounded the misery. On the face of it, from an English perspective, World Cup 2014 was the stuff of nightmares.

But it’s the manner in which you bounce back from disaster that bears the hallmark of true champions. The young cubs could’ve licked their wounds. Instead, they dusted themselves off and immediately set about clawing back some pride.

England were magnificent in qualifying, registering a perfect record of 10 wins and registering 31 goals and conceding just three in the process. Naysayers will point to a lack of quality in the group, suggesting that 30 points should have been the expectations from the get-go. However, you can take nothing away from the mature performance against Switzerland away in the first competitive fixture following the shamble of Brazil. That win established a solid foundation and the Three Lions have grown in stature and confidence over the past two years. A friendly loss to Spain towards the end of 2014 did serve as a reality check; still, Hodgson’s men certainly head to France as one of the form teams. Confidence plays a big role in football.

Perhaps more importantly, Hodgson’s vow to invest in youth has paid off. Prodigies of the failed 2014 squad have become far stronger for those experiences, with Ross Barkley leading the way for youngsters that have grown into the senior setup during the 2014-16 campaign. Meanwhile, the rising talents of Dele Alli and John Stones have quickly emerged as some of Europe’s hottest properties. Likewise, Harry Kane has settled into life as an international footballer with consummate ease whilst Raheem Sterling, Daniel Sturridge and co all have something to offer too. Skipper Wayne Rooney aside, this current crop of players might not boast the star names. Nevertheless, it’s impossible to dismiss its talent.

In fact, the lack of star attraction may work in England’s favour. Unlike the previous Golden Generation, there is no burden of expectation. Confidence inside the camp is mirrored by optimism outside it, but talks of winning the tournament are kept to a whisper. It’s a stark contrast from the Eriksson days, and allows this youthful team to play with the freedom and swagger that has served them so well.

Youth shouldn’t be mistaken for inexperience, though. Aside from the physical exertion from playing every four days, tournament football can be very challenging on the mind, especially for players unversed in the concept of being away for weeks on end. The experience of heading across the world to Brazil will have mentally prepared a number of those young Lions; quite frankly,  France should be a doddle. 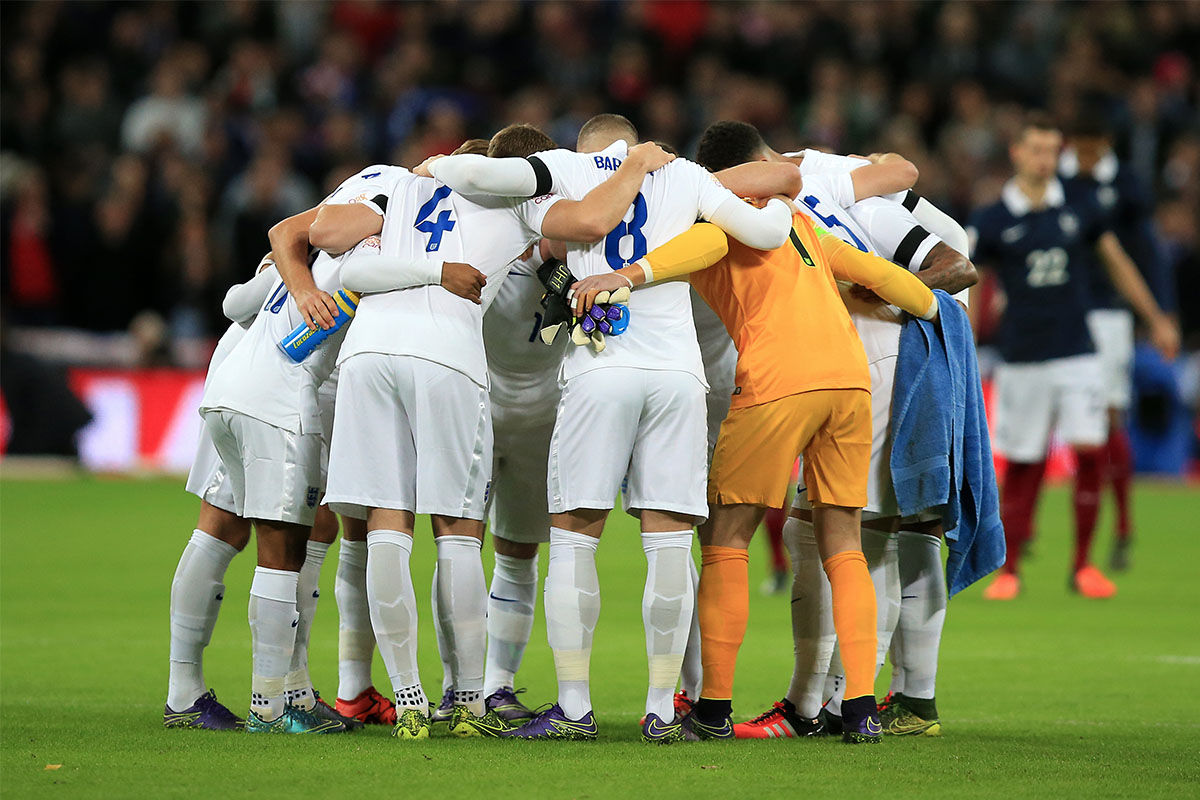 Similarly, these young stars are all top players that have gained experience at the very top level. They’ve performed on the Premier League, Champions League and international stages, so they shouldn’t be overawed by the occasion. Even Alli, who has only burst onto the scene thanks to a phenomenal debut season at White Hart Lane, boasts over 100 senior appearances at the tender age of 19. Both physically and mentally, this batch of sprightly stars is ready to go to war.

And if those young players need inspiration, they only need to look at the men standing at either end of the pitch. Goalkeeper Joe Hart has been a consistent force as England’s No.1 for six years now. The Manchester City custodian’s experience at the top, for both club and country, combined with his vocal command of the penalty area make him a formidable figure between the sticks. For the likes of Chris Smalling and John Stones, that security could be priceless.

Meanwhile, captain Rooney has seen and done it all. The 30-year-old has carried the weight of a nation on his broad shoulders for 12 years and has experienced both ends of the scale. Rooney has matured naturally over the years, but taking on the armband has catapulted him to a new level. Away from the pitch, he has taken the responsibilities of being England skipper into his stride; on it, this campaign saw him overtake Sir Bobby Charlton as the nation’s all-time leading scorer. Yet, despite 13 goals in 21 international appearances since the start of the 2014 calendar year, his place in the starting XI might not be guaranteed. There lies arguably this England side’s greatest strength.

For many years, it was commonly accepted that having a set team would guarantee success. Heading into the tournaments of ‘02, ‘04 and ‘06, 99 out of 100 England supporters could have agreed on at least nine of the starting XI without debate. Whether that led to complacency can never be known for certain, but it certainly didn’t transcend to results on the pitch. This time, though, Hodgson faces a real selection headache. The talent pool to make the initial 30-man squad might be limited to no more than 40 names. After that, though, even narrowing it down to 23 could pose a few dilemmas. Picking a team for the opening game against Russia on June 11 is something that the manager might not be able to do until hours before the contest. That has to be better than knowing it six months before the tournament.

England finally have genuine options. If Hodgson can assemble the pieces effectively, the Three Lions might, at last, unearth their first winning puzzle in half a century. Meanwhile, the wealth of alternatives should open the door for plans B, C and D. Many fans believe that the lack of choice has been a major contribution to the continued failures, especially in the past 20 years. This team is still far from perfect, but it can certainly head to France with quiet confidence.

One of the chief reasons for England fans to get excited, however, is the lack of competition. The expansion from 16 to 24 teams means that the Three Lions will need to overcome one extra opponent to finally end their five-decade wait for silverware. But the increase in quantity certainly hasn’t been met by an amplification of quality. Spain, Germany, and Italy are all shadows of their former selves, although the reigning World Cup-winners are still very much a quality outfit. Meanwhile, the bi-yearly disruption in the French camp started with record prematurity ahead of their home tournament. Combined with the fact that Netherlands failed to even gain an invitation to the party, Euro 2016 is wide open before a ball has even been kicked. It was only 12 years ago that Greece showed the continent that anything is possible, and those sentiments could ring true at this summer’s event too.

A fortunate draw that sees England take on Wales, Slovakia and a Russia side whose problems on and off the field have been well-documented means that Hodgson’s men should escape the group with minimal fuss. Meanwhile, winning Group B should land the Three Lions an easy round of 16 tie, especially as four of the third-placed teams progress to the latter stages. Assuming the Lions do register their first knockout victory since 2006 to land a quarter-final spot, a best performance in 20 years would be just one win away.

To suggest England will go out and roar their way to victory in 2016 would be over zealous, but there’s every reason to think Roy’s Boys can have a very successful tournament. After the past decade of disappointment, it would be a very welcomed outcome.