Watford have had no shortage of standout performers this season.

Abdoulaye Doucouré has impressed in midfield once more, José Holebas has enjoyed a productive season with three goals and six assists while Roberto Pereyra sparkled in the early months of the season with five Premier League strikes by the end of October.

Ben Foster, signed from West Bromwich Albion last summer, has been an excellent addition while Gerard Deulofeu's stunning double to down Wolves in the FA Cup semi-final is the reason they have the chance to clinch the first major piece of silverware in the club's history.

However, when Watford's mercurial Spaniard walks out onto Wembley to face Manchester City on Saturday evening, he can not lay claim to having won the club's Player of the Year.

No, that accolade has gone to Étienne Capoue.

The Frenchman, who often flattered to deceive during the early stages of his Vicarage Road career, prepares for Saturday's showdown with the newly crowned Premier League champions fresh off the back of his finest season in England.

Like Deulofeu, Capoue has had an interesting career arc. Considered a rising star at Toulouse having broken into the first-team as a teenager, he took a significant step in the right direction when he signed for Tottenham Hotspur in 2013.

Deulofeu, a product of Barcelona's vaunted La Masia youth academy, was given a second chance at the Camp Nou when they re-signed him in 2017. Capoue failed to establish himself at Spurs while Deulofeu struggled to nail down a spot in a star-studded Barça line-up.

But both players have found a home in Hertfordshire, taking their games to new heights under Javi Gracia, the quietly impressive Watford boss.

And while Deulofeu often provides the fireworks – his deliciously improvised lob over John Ruddy in that semi-final was one of the moments of the season – Capoue has been the heartbeat of this side.

A pillar of consistency in the middle, the 30-year-old has formed one of the most underrated midfield partnerships in English football alongside Doucouré.

They are different players, of course. Doucouré is a much more effective attacker, more involved in dribbling, chance creation and shooting. Capoue is a more reserved presence, offering a heightened reading of the game while protecting the back four.

Of course, it hasn't always been such a sunny outlook for Capoue at Watford. Having arrived for a then club-record £6.3million in July 2015, expectations were unsurprisingly lofty.

Although he shone in his debut campaign under Quique Sánchez Flores, fans grew frustrated at his inconsistency. Patches of exceptional form – he started the 2016/17 season in remarkably well under Walter Mazzarri – have been followed by underwhelming displays.

Marco Silva certainly didn't fancy him. A reported training ground altercation in July 2017, shortly after the coach's arrival, led to the No.29 starting just five Premier League games during the Portuguese's turbulent reign.

From there, he has continued to flourish under the 49-year-old, starting all but five league games this season. The sight of him breaking up the opponent's attacks has become a regular feature; he managed more interceptions than any other player this season with 86.

He excelled elsewhere, too, ranking second in headed clearances – using his 6ft 2in frame to good effect when defending set-pieces – as well as sixth and eighth in possession won in the defensive and middle thirds respectively. In addition, only four players surpassed his haul of 90 tackles.

His contributions have been crucial during the cup run, too, netting the winner against Queens Park Rangers as well as the opener in the 2-1 quarter-final defeat of Crystal Palace.

In the semi-final triumph over Wolves, he completed more passes than any other player; a steady, metronomic presence amidst the madness. 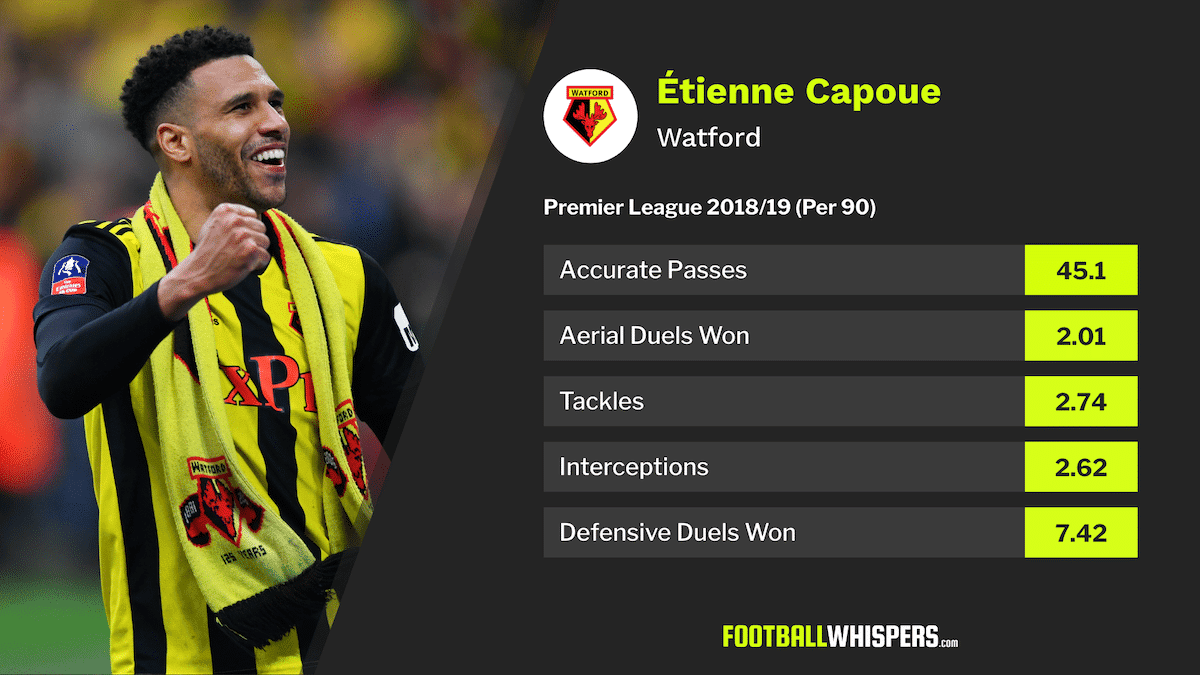 Given his consistency, Capoue more than earned his POTY award.

“He deserves to have that reward because he has played really well all the season, at a constant and high level,” Gracia said.

There has been concern over Watford's dip in form of late. Indeed, since reaching the cup final, they have lost four of their last six games, with their only win coming against relegated Huddersfield Town.

Three straight defeats to end the league campaign saw them finish 11th when they had been battling for seventh for much of the campaign. It's perhaps understandable that their focus has been on Wembley over the last few weeks. However, with City having romped to their title defence courtesy of 14 straight wins, the Hornets will need every player operating at their maximum.

That, of course, includes Capoue, whose remit of stopping City's creative players surely has to be one of the most daunting challenges of his career. Based on this season, though, he's more than up to the task.

Capoue may not be the matchwinner on Saturday, but he'll be as important as any other man in yellow as Watford aim to spoil City's domestic treble party and turn a satisfactory season into a truly memorable one.