In terms of proficiency and value for money, a strong case can be made for Brighton and Hove Albion nailing the transfer market more so than any other Premier League club last season.

The Seagulls were certainly one of the most active English top-flight club marking their promotion with 15 new additions over the course of the campaign a significant proportion proving key in avoiding what was an expected return to the Championship.

Pascal Groß was not only an incredible player from a Brighton point of view, with seven goals and eights assists, he was a top-five midfielder in the Premier League for big chances created per 90 (0.48), open play key passes (1.19) and xA per 90 (0.2).

After a nervous opening few months, Davy Propper developed into an energetic and creative presence in the midfield, Mat Ryan was among the most consistent and reliable goalkeepers while Jose Izquierdo, Markus Suttner and Ezequiel Schelotto performed important roles as squad players.

What united them all is their affordability – all of the above were £13m and under – and their lack of received recognition, in a wider sense, when they arrived at the Amex Stadium, as none could remotely be considered household names. 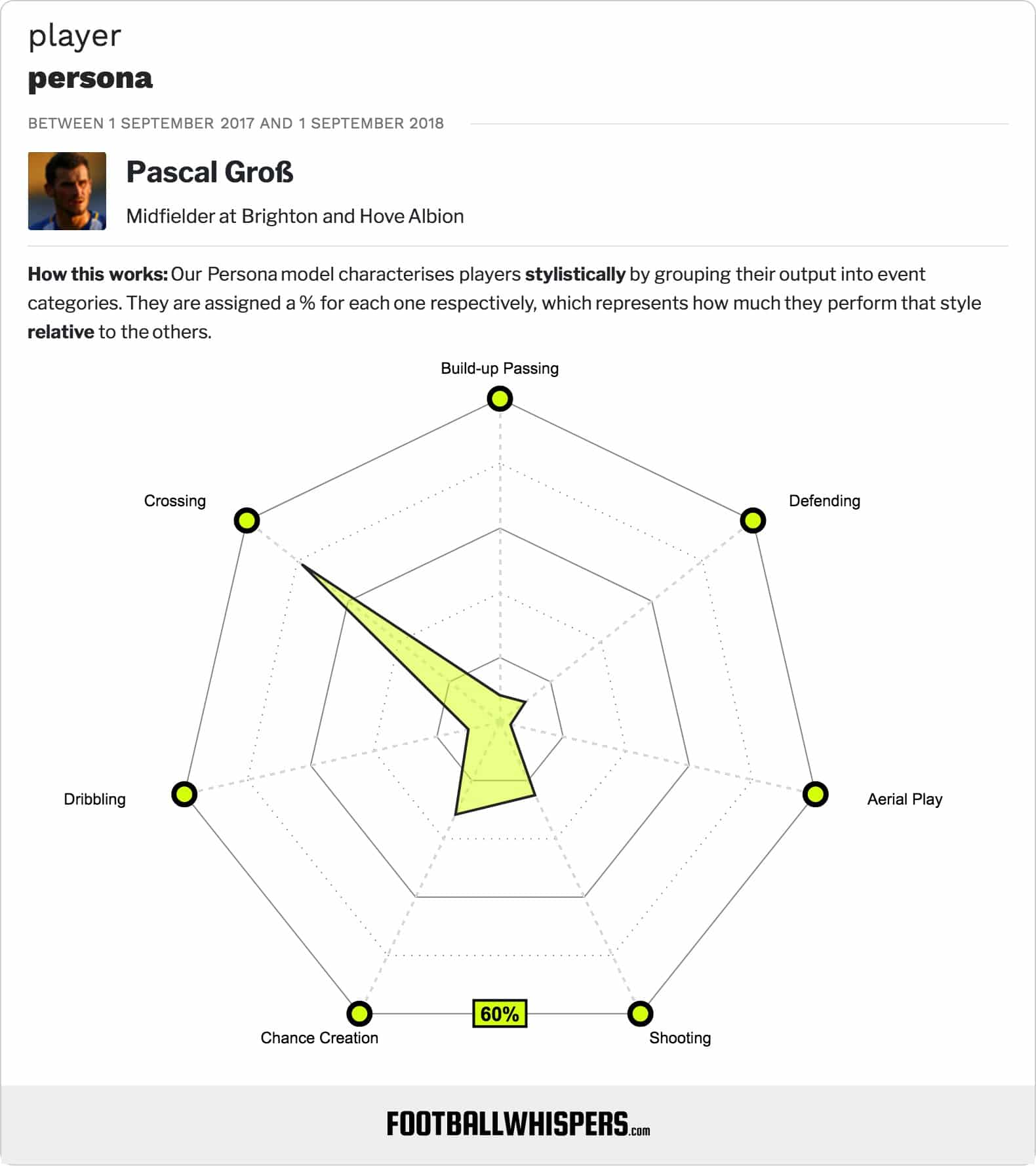 It’s fitting in a way that the only major misstep of the window was Jurgen Locadia who they paid a £15.3m club record fee but the Dutch international failed to fully integrate himself into the side. Although after just five months of Premier League football, he undoubtedly needs more time.

Brighton were, though, in the main who did their business quietly but with maximum impact; testament to the work done by the head of recruitment Paul Winstanley and their scouting and analysis department, with a clear ability to unearth diamonds when others fail to see any sparkle.

The dying embers of last season are yet to fully be extinguished but already the Seagulls have been busy at work and this week announced the signing of versatile Nigerian international defender Leon Balogun from Mainz on a free transfer.

At surface level, everything about Balogun fits the Brighton profile: he’s largely unheard of, even in Germany where he was sparingly used by Mainz, among the Bundesliga’s least high-profile clubs; he cost nothing and will undoubtedly be on a very agreeable salary.

He even plays in a position which rarely attracts must excitement and at 29, Balogun is an unfashionable age for a new signing with so much emphasis placed on resale value which further flies him under the radar.

Even within the city he now calls home as a cursory scan of Brighton’s social media accounts upon his arrival reveals the lion’s share of the engagement to be from Nigeria, who he should be representing at the World Cup next month having been included in the preliminary 30-man squad.

Balogun was first capped by the Super Eagles in 2014 but after a stuttering start to his international career has become a crucial member of their defensive unit, starting five of their final six World Cup qualifiers as he and his team-mates prepare to meet Lionel Messi’s Argentina, Croatia and Iceland in Group D.

It’s extremely hypothetical but any positive displays in Russia and Balogun becomes a considerably higher-value asset than he was before. Irrespective of how he performs, he’ll be a Brighton player and they’ve got him at the right time.

Although he made only 14 Bundesliga starts last season what marked Balogun out during Mainz’s successful relegation battle was his character and how he was as important a member of the dressing room in creating spirit as he was on the field, more so perhaps.

That chimes with the spirit and atmosphere Chris Hughton has fostered at the Seagulls where he’s not just looking for competent footballers but also leaders and individuals who can raise the collective beyond their ability on the field.

His suitability for Brighton stylistically immediately draws on his height and aerial ability. At 6ft 3ins he’s of a similar stature to first-choice centre-backs Shane Duffy and Lewis Dunk and his 3.29 aerial duels won per 90 last season was 45th among all players in the Bundesliga.

One curious aspect of Brighton’s season in 2017/18 is that despite their obvious physical advantages at set-pieces – 11 outfield players in their first-team squad are 6ft and over – they only scored five times from corners and free-kicks (second fewest in the league) and conceded 21, four more than the next worst team (Watford). 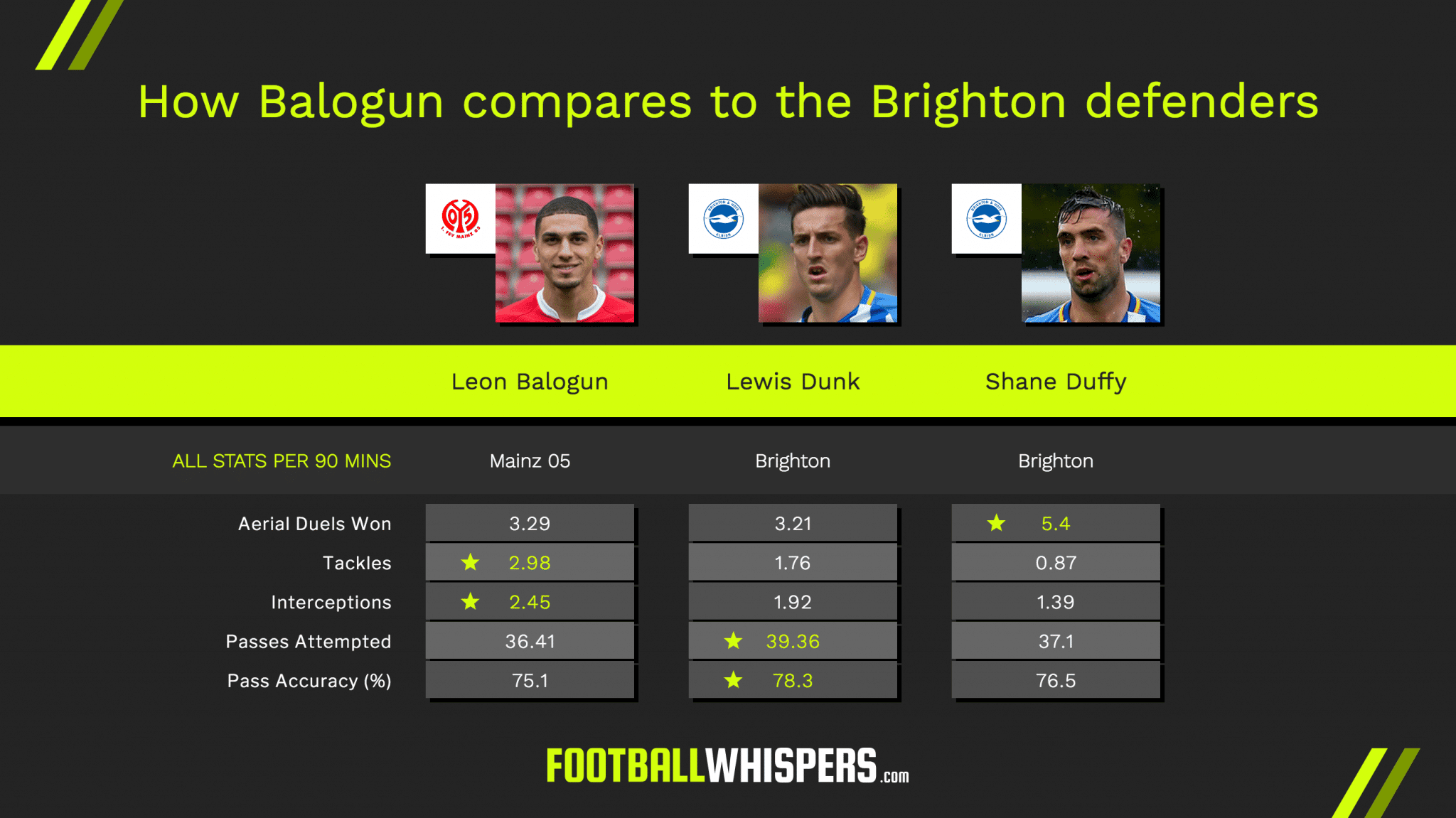 It’s unlikely Balogun can solve that himself, as clearly there are structural and organisational issues at play, but adding another player of height certainly can’t hurt; although should be noted Mainz conceded 18 – joint second worst in the Bundesliga.

He’s shown himself to be a proficient tackler with 2.98 per 90 in the Bundesliga placing him 40th overall while his 2.45 interceptions per 90 ranked 12th. In pure defensive numbers alone, Brighton are signing a top 30 player from the Bundesliga for nothing.

Another attraction will be his versatility as although he was used almost exclusively at centre-back last season, he can also start as a right-back; a position Brighton are a little light with Bruno, now 37, and Schelotto their primary options.

Of course, there are red flags. None more so than the mere fact he was unable to command a regular place in one of the Bundesliga’s weakest defences at 1.52 goals conceded per game (sixth worst); that said, their xGA was 45.18 and 6.86 below their actual conceded, putting them more towards mid-table.

An aspect of his play he may find restrained on the south coast is his propensity to dribble as Balogun 0.76 successful take-ons per 90 is more than what Gross (0.36) and Dale Stephens (0.5) were producing as midfielders. Hughton, quite simply, likes his defenders to defend.

But those potentially hair-raising moments aside, Brighton will hope they have plucked another understated and underrated gem out of the transfer market as everything about Balogun seems perfect for what the Seagulls are about.