Tottenham Hotspur didn't have the deepest of squads with a clean bill of health, and recent injuries have pushed them to the extreme.

Injuries to Eric Dier, Victor Wanyama, and the now departed Mousa Dembélé coincided in a triple-whammy that must have left Mauricio Pochettino with a debilitating headache of his own.

In recent weeks, the team has been held together by sticking plasters over the gaping holes in the starting XI, and the stickiest of them all has been Christian Eriksen.

The Dane has gone from playmaker to midfield metronome, which is a testament to his ability and versatility.

Before the change, one of the players who Eriksen's playing style was most comparable to was Manchester City's Kevin de Bruyne, according to Football Whispers' persona model.

However, since the festive period – December 23 to be pernickety – it's been on the same lines as players like Granit Xhaka and Cesc Fabregas from last season: a duo who are certainly capable of playing decent, creative passes but mostly sat deeper and circulated possession.

And while Eriksen has been a useful player in such a position, it's been something of a waste of his talents.

Before his role changed, Eriksen was Tottenham's second-best player for passes into the central area of the 18-yard box, after Kieran Trippier. Overall in the league, he was 23rd.

This was a good position for a player who already spent more time deeper in midfield, and a lot more time centrally than his competitors. For example, look at his heat maps compared to the two Silvas of Manchester City, who were near the top of the list. 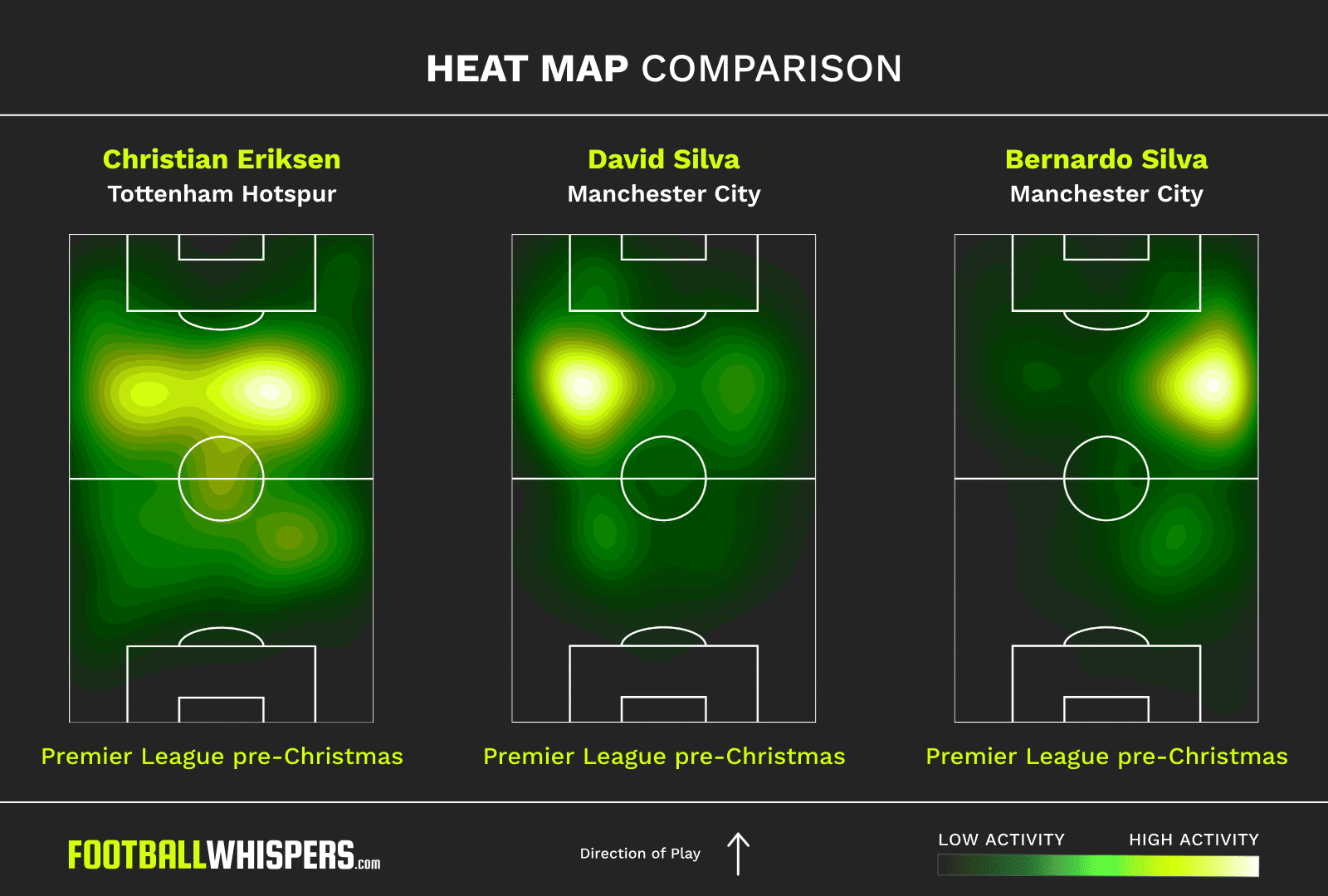 Bernardo Silva and David Silva spent a higher share of their time close to the box than Eriksen did, and from a better angle to make truly dangerous passes.

From the central position Eriksen has often be in, there's a far higher chance that passes will skid on through to the goalkeeper. Really, you could argue that it's surprising the Dane was as high up the list as he was.

If you add in the minutes that Eriksen has played since Christmas, then he drops down the league's list for these dangerous passes to 31st.

Bizarrely though, Tottenham's continuing injury crisis could help swing the balance back the other way.

With Son Heung-Min at the Asian Cup, and Harry Kane and Dele Alli injured, Spurs are suddenly short of attacking players. The shortage might convince Pochettino to push Eriksen further forward again, the need for his creativity being greater than his safety on the ball.

Whatever is asked, Eriksen, whether he likes it or not, is sure to do what his manager needs him to. And, if he doesn't like it, there are always other, sunnier, options for him…