Amidst a mountain of tenuous links and dubious sources, one transfer story this summer seemed a sure bet: Barcelona finally signing Antoine Griezmann.

The equation for Barça is simple. They have just won the La Liga, and comfortably so, but have their sights set on ending Real Madrid's seemingly indefatigable conquest of Europe.

High-profile names were expected to arrive and bolster the squad ahead of that pursuit, Griezmann the overwhelming favourite to be first through the doors at the Camp Nou.

However, recent reports have claimed that, while Barça remain confident the Frenchman will join from Atlético Madrid, they are still preparing a contingency, a prudent move in the chaotic and capricious world of modern football transfers.

The Denmark international is said to be Barça's go-to option should the Griezmann deal fail to materialise. However, given Eriksen's own status as one of Europe's most esteemed playmakers, we look at whether the Spurs midfielder would be a more suitable addition to the Blaugrana‘s ranks.

Fitting Eriksen into the equation

Eriksen to Barcelona is not a question of worthiness; rather, it's deciphering where best the Dane would fit in the Catalan club's starting line-up.

The most seismic change at the Camp Nou this summer is unquestionably Andrés Iniesta's departure. Having entranced the club's supporters with his supreme powers of invention for the better part of two decades, the 34-year-old is embarking on a new chapter in Japan, leaving a considerable hole in Barça's midfield.

Barcelona had planned for Iniesta's exit. Signing Philippe Coutinho from Liverpool in January was a conscientious move; acquiring a readymade replacement for their captain and affording him the second half of the season to get acquainted with his new surroundings.

Thankfully, one of the Brazilian's many gifts is his versatility. Coutinho can operate from a deeper midfield position or across the frontline in a 4-3-3. Valverde also used him on the right in a 4-4-2 in the latter stages of the season.

With Coutinho's comfort in shifting further up the pitch, it could be argued that Barça don't need Griezmann.

However, with André Gomes and Denis Suárez likely to follow Iniesta out of Barcelona, it will leave the Spanish champions very much in need of midfield reinforcements with uncertainty over when Gremio midfielder Arthur will join.

Griezmann, on the other hand, has not traditionally played further back, so, if the Frenchman were to sign, he would presumably be deployed in attack, with Coutinho slotting into an advanced midfield role. 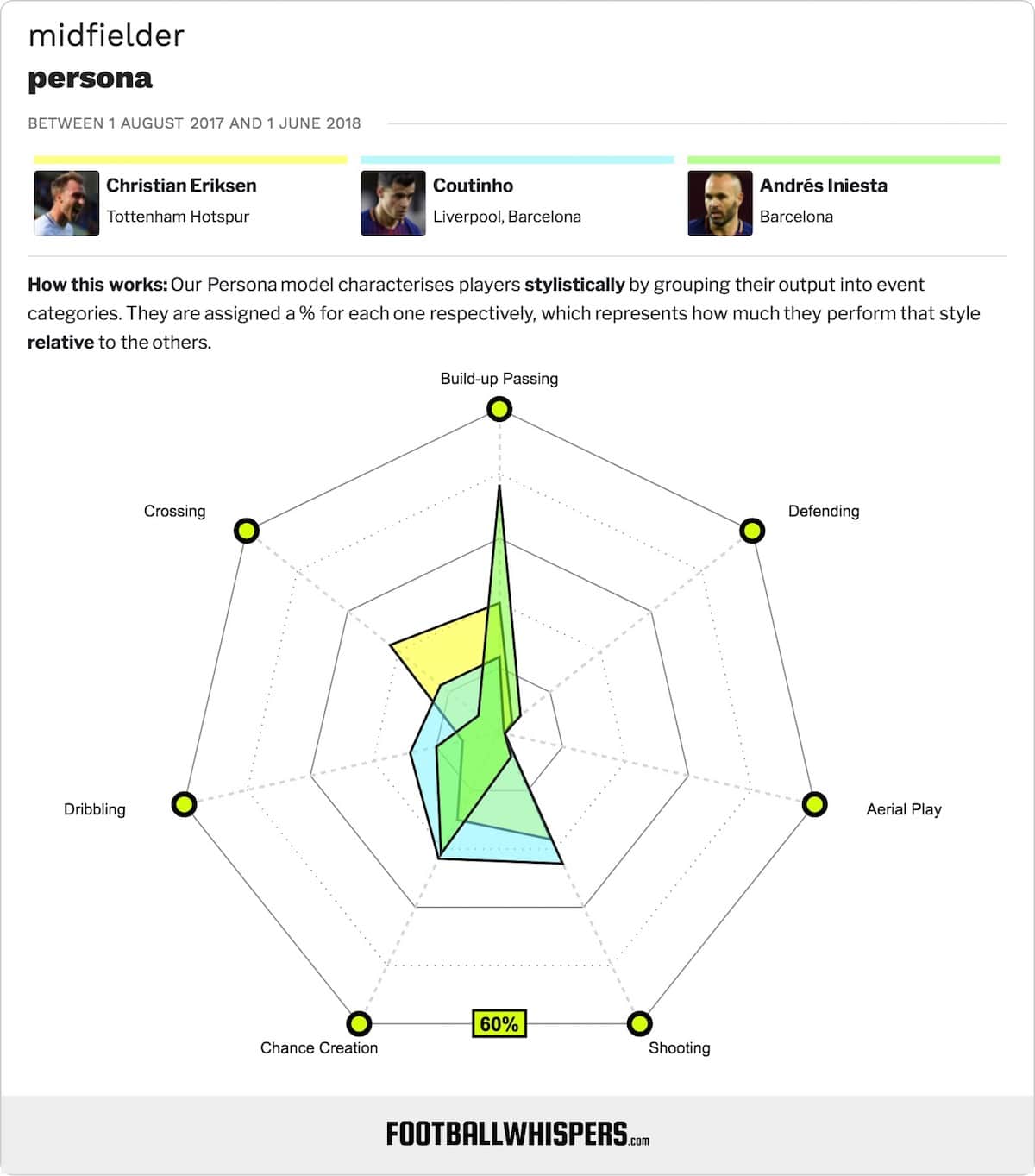 Eriksen and Griezmann offer different qualities. Eriksen is a beautifully smooth and subtle operator and one who has blossomed into one of the Premier League's most proficient playmakers. He has mastered the art of finding space between the lines and slotting through balls into runners beyond the defence.

In the season just passed, Eriksen ranked fourth in accurate passes per 90 in the Premier League, 14th in big chances created and seventh in both open- and set-play key passes per 90.

His xA (expected goals assisted) of 9.21 was the second-highest in the league for midfielders, behind only Kevin De Bruyne. Eriksen also played more secondary key passes (a pass which sets up a key pass) than any other Spurs player and created an astonishing 45 chances for Harry Kane alone.

Of course, Eriksen does not play behind a three for Spurs; he operates behind Kane, alongside Dele Alli and Son Heung-Min in Mauricio Pochettino's preferred 4-2-3-1.

Of course, with Eriksen's understanding of space, a subtle positional change isn't going to blunt his imaginative abilities.

Whereas Eriksen is an elite playmaker, Griezmann is considered to be more a long-term replacement for Luis Suárez, who will turn 32 in January.

Griezmann, of course, carries a greater goalscoring threat than Eriksen. The 27-year-old 0.67 goals per 90 was good enough to place him seventh in La Liga, while he outperformed his xG (expected goals), scoring 19 league goals from an xG 9.14, giving him a goals-xG ratio of 2.07. 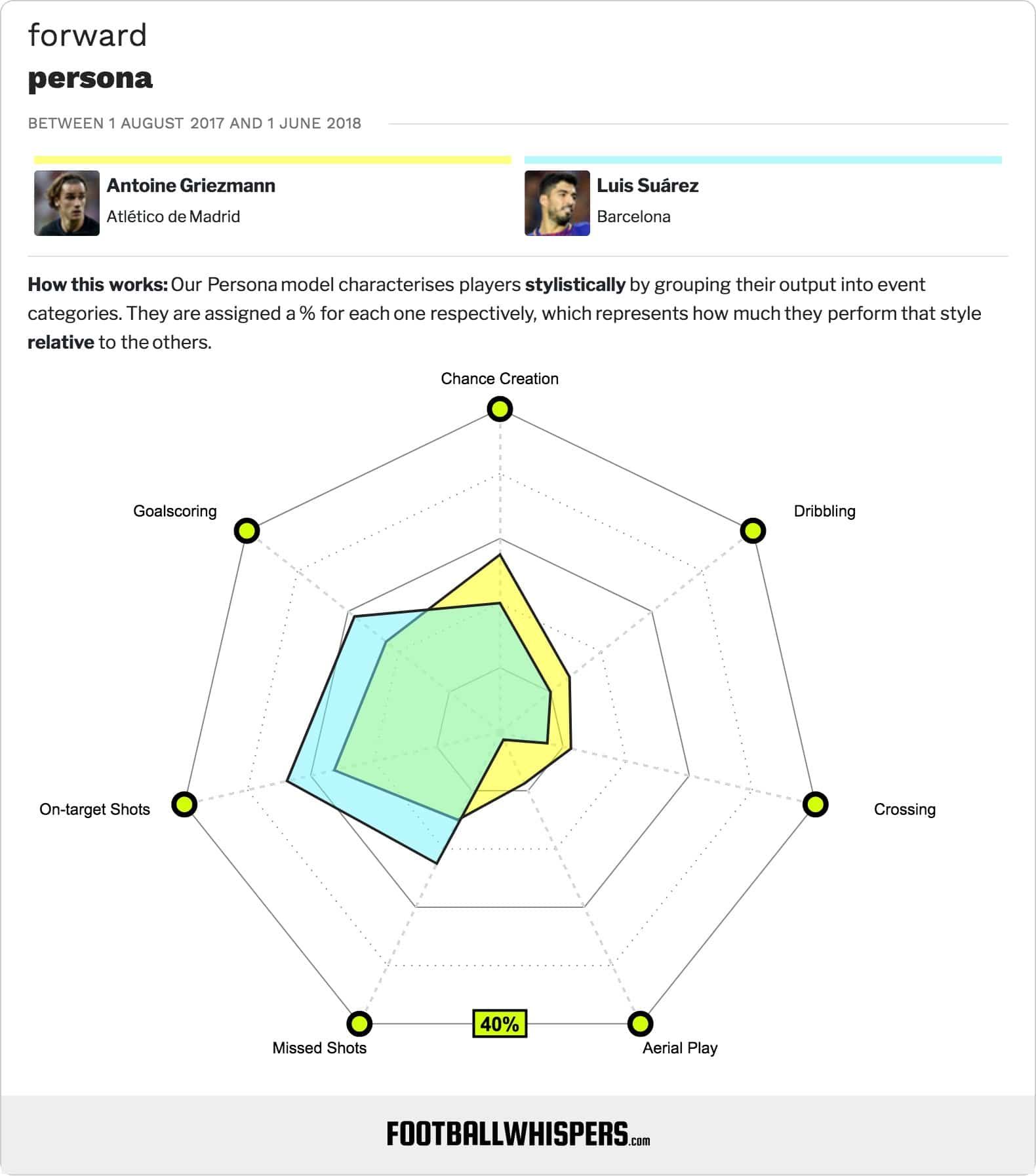 Griezmann struck 29 times in all competitions this season, firepower that Eriksen simply cannot provide. But the Les Bleus star, perhaps surprisingly, also managed more assists than Eriksen, with 13 to the Dane's 11. Eriksen averaged much more open-play key passes per 90, though, with 1.75 to Griezmann's 1.06, suggesting that some of his Spurs teammates deprived him of further assists by squandering their chances.

If Eriksen were to join instead of Griezmann, Barcelona could theoretically revert back to their traditional 4-3-3, with a midfield trio of Paulinho, Sergio Busquets and Eriksen (as the most advanced of the three) behind an attacking trident comprised of three from Lionel Messi, Coutinho, Ousmane Dembélé and Suárez.

That's undoubtedly an enticing prospect, but with Griezmann having fired Atlético to Europa League success in May and with over 100 La Liga goals to his name (dating back to his time at Real Sociedad), it's easy to see why Barcelona have earmarked him as their primary transfer target.

The most likely outcome this summer is Griezmann sealing his Barça move with Eriksen staying put in North London for another season. However, while it seems as though it would take a lot to turn the heads of Kane or Alli, one wonders whether Eriksen would be able to reject a concrete offer from a club like Barcelona.

With Marca also reporting that Real Madrid are considering Eriksen as a long-term replacement for Luka Modrić, it's certainly telling that the former Ajax wonderkid is being mentioned in the same breath as Europe's super-clubs.

Eriksen enjoyed another stellar campaign with Spurs but, after five seasons without a trophy, the Dane could perhaps be excused for entertaining notions of a new challenge.

That is not to say that Eriksen will angle for a move. By all accounts, he is happy and settled under Pochettino but, having previously admitted that it would be hard to say no to Barcelona, one wonders whether Eriksen turning out in the Catalan giants' colours is a matter of when and not if, especially if he continues as one of the Premier League's outstanding, high-functioning creative minds.

Of course, if that happens, expect to see Eriksen's market value shoot up way beyond the £87million Barça are primed to pay for Griezmann.