It’s been a curious season for Tottenham, one almost shrouded in uncertainty symbolised by the continual delays to the construction of the new White Hart Lane. What was supposed to be a grand parade and celebration of the club’s new era has instead seemed almost like a period of limbo for Spurs.

Tottenham appear to be drifting, rather than maintaining the incremental improvements under Pochettino which has taken them from occasional top-four botherers to a genuine Premier League and European force.

Likewise, as a consequence or influence, some of the team’s leading lights in past seasons appear to have sleepwalked through the start of the season, none more so than Eriksen who continues to be plagued by injury but even when he has played hasn’t been as impactful as previous campaigns.

Giving the Dane the benefit of the doubt, the former is more than likely influencing the latter, coupled with some potential post-World Cup fatigue. Although, the 26-year-old had started seven games this season before his abdominal injury first flared up.

But, just like this campaign was supposed to be a pivotal one for Spurs, so too it was Eriksen with eternal admirers within the corridors of power at Real Madrid and suitors at Juventus and AC Milan. Instead, it’s been one largely of frustration.

His physical situation has to be taken into consideration, with Tottenham placing him on a carefully-managed fitness schedule, while he’s too good not a player to experience an upturn in output.

Last season, Eriksen was a top ten player for open and set key passes per 90, averaging 1.73 and 0.61, respectively. This term those two figures have dropped to 1.23 and 0.46. Not huge decreases, of course, but enough to remove him from any kind of elite performer bracket. Unsurprisingly his xA per 90 is also mirrored in its decline, from 0.25 to 0.15. 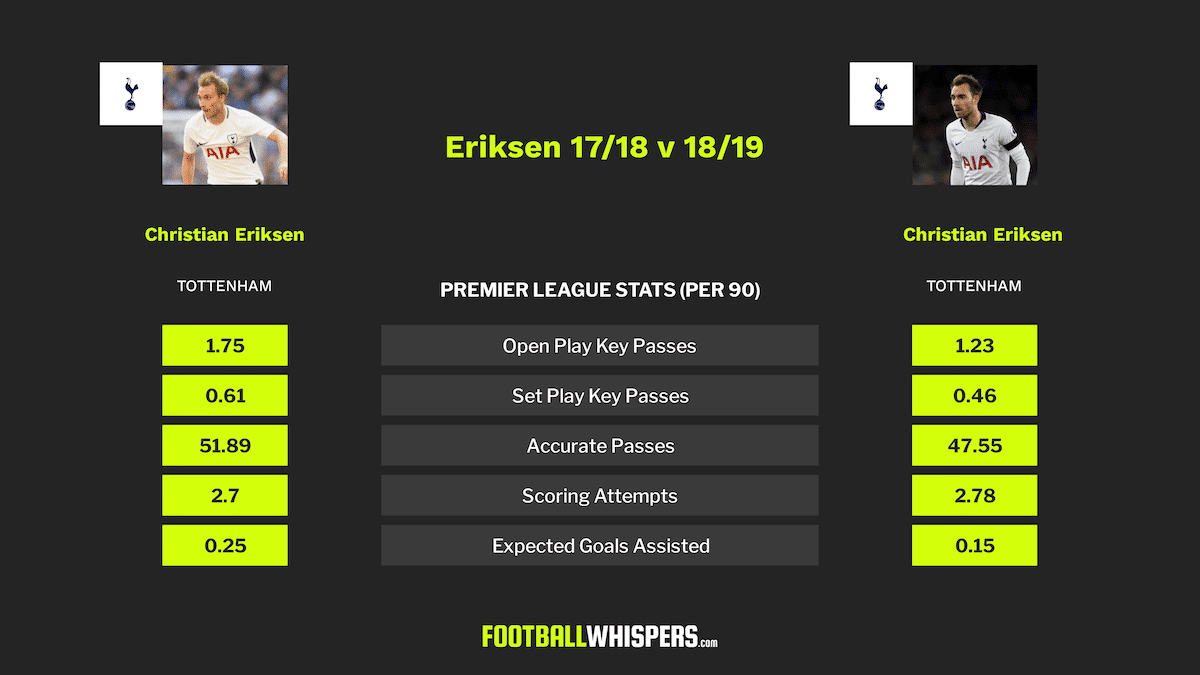 Not only has he been hamstrung by his own body, he’s also had to deal with Harry Kane dropping increasingly into a playmaker’s role, crowding him for space. While Lucas Moura is not the same kind of target as the England striker.

It’s a period of adaption and adjustment he’ll need to make but only adds to the odd uncertainty around Spurs, which is sort of justified but then can also be argued as something of an illusion, manufactured to fit inside a premeditated narrative.

Ultimately, the truth lies somewhere in between. Tottenham aren’t playing poorly, or in a position of great concern, but neither are they firing on all cylinders. The same can undoubtedly be said of Eriksen, a player who will almost certainly rediscover his top form sooner or later.