2017/18 was a difficult season for Tottenham Hotspur. Their squad was not blessed with incredible depth, and injuries to Victor Wanyama and Mousa Dembélé at the start of the season forced them to alter their tactics significantly.

The absences, and Dembélé’s struggles after he returned, shone Tottenham’s season through the prism of a ‘we need to find a Dembélé replacement’ narrative.

The tinkering that Mauricio Pochettino had to do highlighted the versatility of two of Tottenham’s other midfielders though, Christian Eriksen and Heung-Min Son.

Eriksen’s role shifted slightly from one season to the next, mainly shifting to play a little deeper in the field.

This was partly a result of the injuries that Tottenham suffered in central midfield during the course of the season, with both Dembélé and Wanyama missing several games at a time.

His role in the attacking part of midfield was filled by Moussa Sissoko and – later, on his return from a long-term injury – Erik Lamela.

There was a period of time when Son seemed to be lining up as a second striker as Spurs experimented with a 3-5-2. Over the course of the season, his stats were broadly similar to 2016/17, but there were subtle differences. 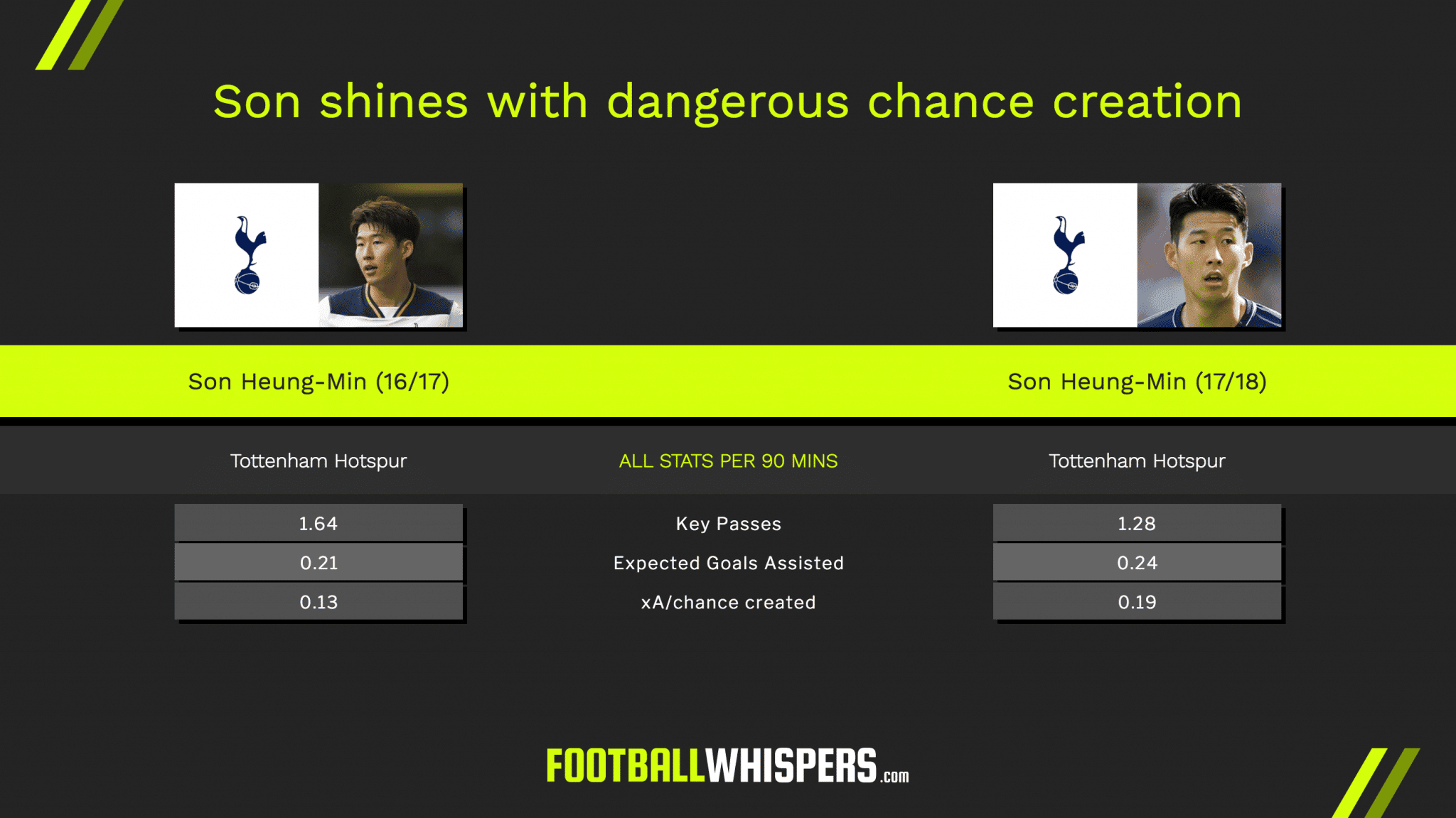 Perhaps this versatility should give Spurs fans some hope.

Most of the discussion about who should be brought in to replace Dembélé has been trying to look for a like-for-like replacement, for which, to be frank, there isn’t.

The Belgian is one of the most press-resistant players in the Premier League, skilled enough to keep the ball while holding off challenges with the vision to find holes to turn and burst into.

In 2017/18, he completed 3.29 successful dribbles per 90 minutes, the eighth-most of any player in the Premier League.

There were other central midfielders in those upper echelons, among the mass of wingers and full-backs, both of the principal ones being Englishmen in London – Ruben Loftus-Cheek (3.5) and Jack Wilshere (3.41).

However, neither of these offers the defensive presence that Dembélé does. 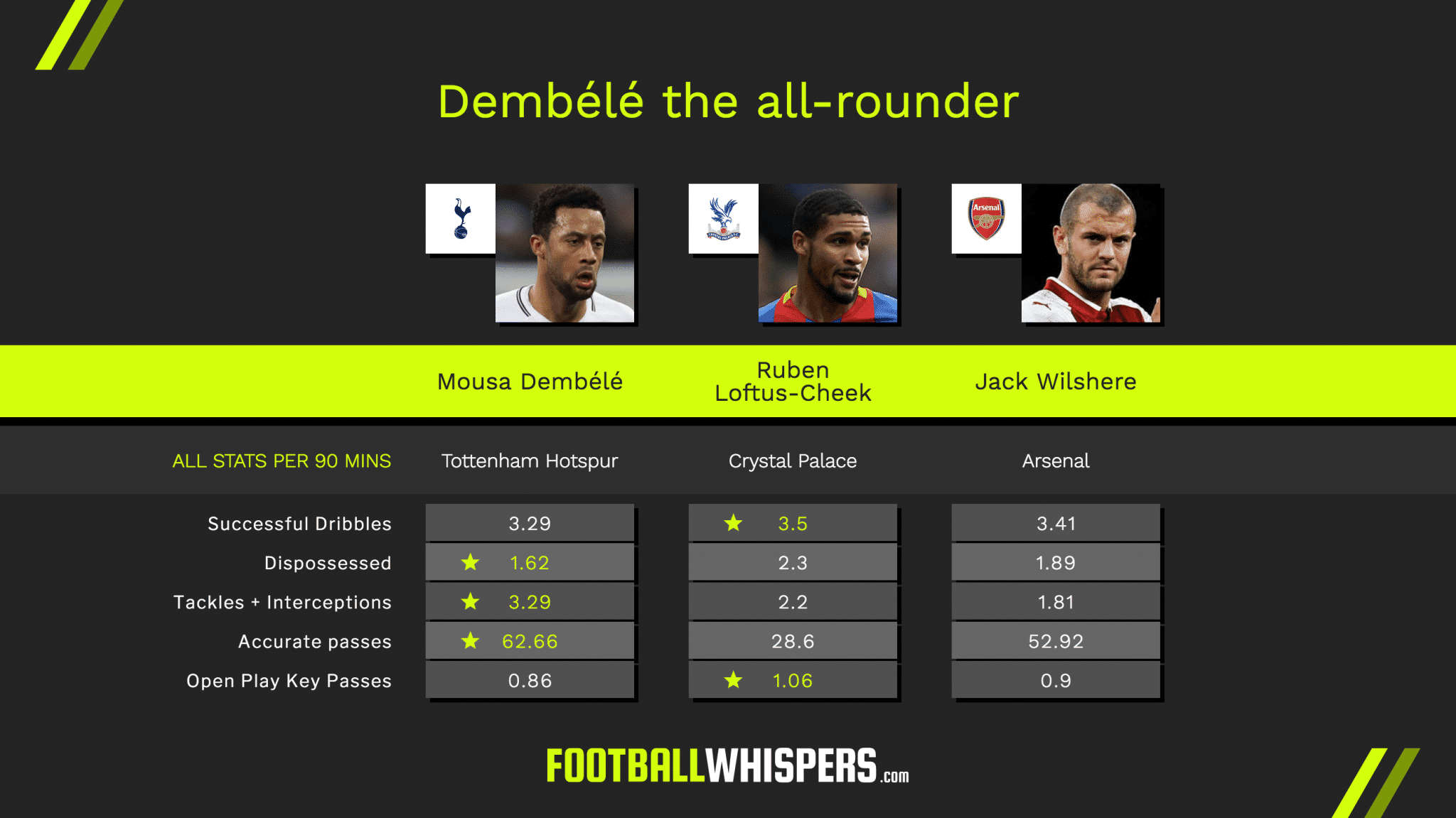 Instead of looking for a perfect Dembélé double then, it seems more sensible to look at how to spread the load of what the Belgian does.

If you’re familiar with Moneyball, you’ll know the scene in which the baseball team the Oakland As have to replace three star players. Individually, they are irreplaceable, but taking the aggregate of their statistics, the As are able to find able and under-the-radar replacements.

Replacing players by the stats doesn’t work in football like it does in baseball, but the principle is the same. You need players who can hold the ball, progress the ball, defend space effectively, and find space to attack in every team.

Dembélé gives Spurs time in midfield when they’re under pressure, is safe with the ball, capable defensively, and is able to progress the ball through midfield.

While the Belgian does this through a mix of dribbling and passing, the way that the ball moves through the thirds doesn’t really matter.

Tottenham could bring in a creative player who is at least competent defensively and pair them with Wanyama. They could look to focus on players who protect the ball, and re-jig how they progress the ball and defend when they don’t have it.

The way that their midfielders have worked in different roles this season shows that there are options, it is just up to Pochettino to decide which one he wants to take.