Their interest in the England international dates back to José Mourinho’s first season in charge when the Portuguese tactician wanted the former Sporting Lisbon youngster to be his destroyer in midfield.

Reports linking the versatile Spurs man with a big-money move to Old Trafford lingered throughout Mourinho’s time there but nothing concrete materialised.

However, according to the Daily Star, United are finally ready to make a move for the 25-year-old and could submit a bid as early as January to secure his services for the second half of the campaign.

And unlike in previous years, beaten Champions League finalists Spurs might actually be open to parting with Dier.

He was once an undisputed starter for Mauricio Pochettino, now he isn't. Injuries have played a part in his fall down the pecking order but so has the change in the system used by the Argentine as well as the emergence and arrivals of others.

This season he's yet to start in the Premier League and he captained Spurs to defeat in the Carabao Cup against Colchester United from a centre-back role.

He's fallen behind Tanguy Ndombele, Harry Winks and Moussa Sissoko in the midfield ranks while Christian Eriksen, Dele Alli and Giovani Lo Celso can also all operate in that third of the pitch.

A move to Old Trafford could suit all parties.

Spurs get good money for a player with just a little over two years left on his contract and who now isn't part of Pochettino's first-team plans. Dier gets a fresh start. And United get their Nemanja Matic replacement while improving their middle third options on the whole. 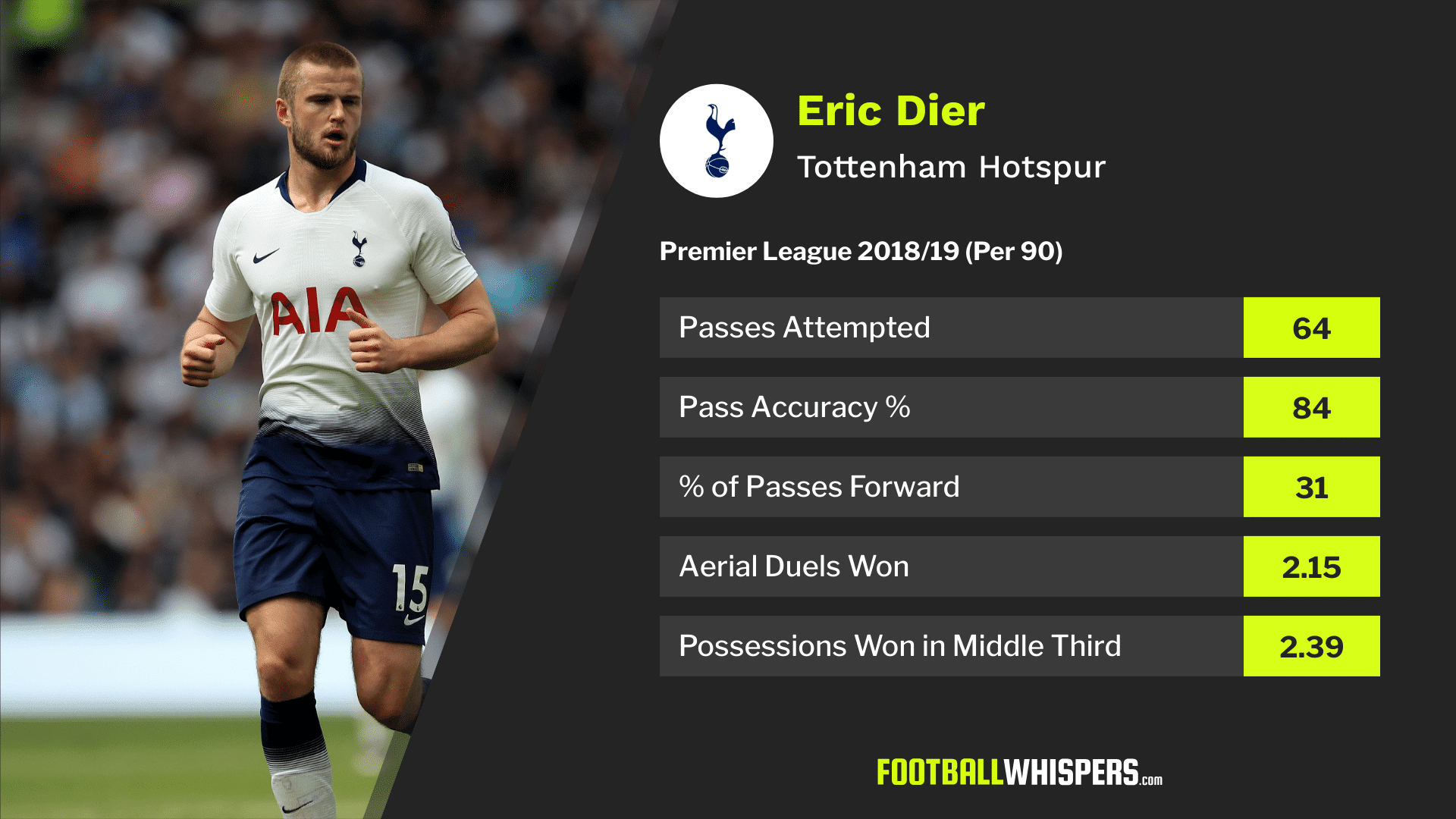 Dier shares a number of traits with the Manchester United man; understandably so given both play a similar role for their respective teams.

But it may come as a surprise that last season Matic averaged more attempted passes per 90. Only three more, admittedly, but it's a stat very few would've expected with the Serbian not famed for his ability on the ball.

The former Chelsea midfielder also completed more of his passes, 87 per cent, but he did play slightly fewer of them forward, 29 per cent as opposed to Dier's 31 per cent.

What it does show, however, is Dier could play the Matic role in the middle third for United. A destroyer who is also at ease with the ball and can keep the play moving.

Both win over two aerial duels per 90, a handy asset for defensive midfielders to possess in the physical Premier League.

Dier wasn't as busy as Matic in the middle third but that could be down to the fact Spurs as a team are more dominant on the ball than the Red Devils. They see more possession and make more passes which means fewer defensive actions are required, especially as the player tasked with putting out fires in the midfield area.

The high Tottenham press also means the ball doesn't reach that area as often as it would for a team who sit a little deeper, just as United did under Mourinho.

The Red Devils have been linked to other players recently, with Sandro Tonali and Declan Rice reportedly on Ole Gunnar Solskjær's wishlist. While both are talented and could become world-beaters, United need someone who can do the job now.

Granted, the West Ham midfielder is turning out for England but he lacks the experience in Europe. United could fork out an eye-watering amount to land him and then he'd finish his development at Old Trafford. But United isn't a finishing school.

That area of the pitch isn't one you can take risks in when battling for a top-four finish. Dier knows the levels required to claim a Champions League spot.

Likewise with Tonali, who has been dubbed Andrea Pirlo's heir, he'd be a massive gamble. More playmaker than destroyer, the young Italian maestro hasn't played in England doesn't know the rigours of the Premier League.

There'd be an adaption period and he might struggle for a season or two. If United have the patience then perhaps the's the one to go after. He's a potential game-changer but with Solskjær banking on youth and inexperience elsewhere, can he really add another unknown into the mix without it hurting the balance?

Dier isn't the best name out there but he might be the best fit right now. Ultimately, United need players who can make an impact from the off. The Spurs man does just that.