What Eric Cantona did at Selhurst Park on January 25th 1995 still polarises opinion. Some say it added to his appeal, while others claim it tarnished his reputation forever. But what is for certain, the actions of the French striker that night provided one of the most iconic and controversial incidents ever to occur in an English football stadium.

It’s a bitterly cold January night in South-East London, Manchester United have their sights set on a third consecutive title and have just acquired the services of Andy Cole; one of the most prolific strikers in the game who’d netted 34 times for Newcastle the previous season.

It seemed only something astonishing would stop Alex Ferguson’s men becoming the first English club to win “three in a row” since Bob Paisley’s Liverpool a decade before – which, as it turned out, is exactly what happened.

Cole had made something of an ineffective debut for United the previous week at home to fellow title challengers Blackburn Rovers, even missing a great chance just seconds after coming on, and all eyes were on the striker going into what most people saw would be a pretty routine game for United. Victory at Selhurst Park would lift United to the top of the table, having played two matches more than Blackburn, and their manager was in confident spirits prior to the game.

“After Sunday’s results we all now know that the chase is on in earnest,” he said.

“I can sense that the mood within my club is right for us to make a genuine challenge.” However, far from underlining the seriousness of his side’s challenge this fixture would all but throw it into disarray.

If United had been confident going into the game then Palace had other ideas. Aware that they were vastly inferior to their opponents they set out to stifle the game, attempting to slow things down wherever possible while also infuriating a United side who were renowned for their fast, counter-attacking style.

As a result, the first half was far from a classic encounter. Palace’s Richard Shaw stuck to Eric Cantona like glue; meaning the Frenchman quickly became an isolated figure and as a result the goal hungry Cole barely got a look-in during that first 45 minutes.

“They were the big team coming to town and we needed to be organised, disciplined and to stop United playing. Richard was told to man-mark Cantona, which was something he did often. As the game unfolded, Richard didn’t give him any room. He was like a rash.” 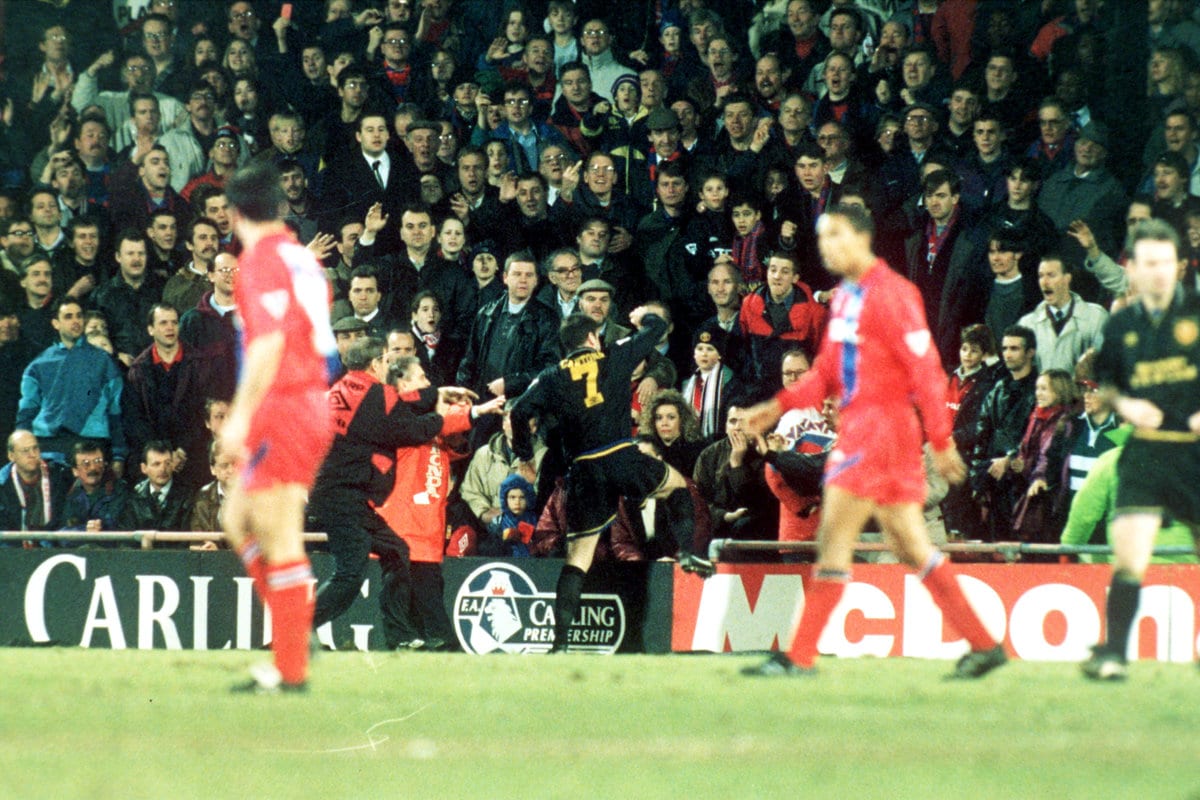 But Shaw’s efforts didn’t stop at limiting Cantona’s influence on the game, they also meant that he became increasing annoyed and wound up. He was renowned for having a short fuse at the best of times and had been sent off many times before during his career, and for anyone who was there that night, it seemed only a matter of time before he snapped again; but to what extent nobody could have foreseen.

Early in the second half Cantona’s irritation finally reached boiling point. Schmeichel kicked the ball into the Palace half and when Shaw gave chase, Cantona appeared to kick-out at him. The linesman, perfectly placed, immediately waved his flag and by the time referee Alan Wilkie arrived he already had the red card in his hand.

Despite being specifically warned by his manager during the half-time interval not to react to any provocation, Cantona had done just that. He stood for a moment looking at the stands as if seeking reassurance or confirmation he was not seeing things. Then he began his long walk of shame towards the tunnel in the far corner of the tight Selhurst Park ground.

While Ferguson delivered instructions to his team, who now found themselves a man down, the attention of everyone else in the ground that night turned to Cantona, who was slowly making his way along the touchline, turning down his trademark upturned collar as he strutted off.

“The thing I remember really clearly was watching him walk down the touchline.” Explained United fan Nigel Rawding, who was there that night. “The game had restarted and we should have been watching that, but Eric was the sort of figure you couldn’t take your eyes off, he was such a presence. He was in that frame of mind, and the way he carried himself was as if he was always ready if something happened.”

In hindsight maybe one of the United senior players should have accompanied Cantona off the field as he received the bird from hundreds of supporters in the main stand. Instead, as United quickly looked to reorganise, that job fell to long-standing United kit man Norman Davies; but he was unable to intervene in what happened next.

Feeling that a red card was insufficient justice 20-year-old Matthew Simmons, a Palace fan and window fitter, decided to take matters into his own hands. He descended down 10 rows of seats from his place in the stand to fire his own send-off at the departing Cantona from the relative safety of behind an advertising hoarding – or so he thought. Hearing the outburst, Cantona paused momentarily, and then responded.

At the time Simmons suggested he'd only shouted: “Off you go Cantona, it’s an early shower for you!” But those nearby claimed his precise words were: “F*** off back to France, you French b*****d.” Either way, Cantona took exception and took matters into his own hands. 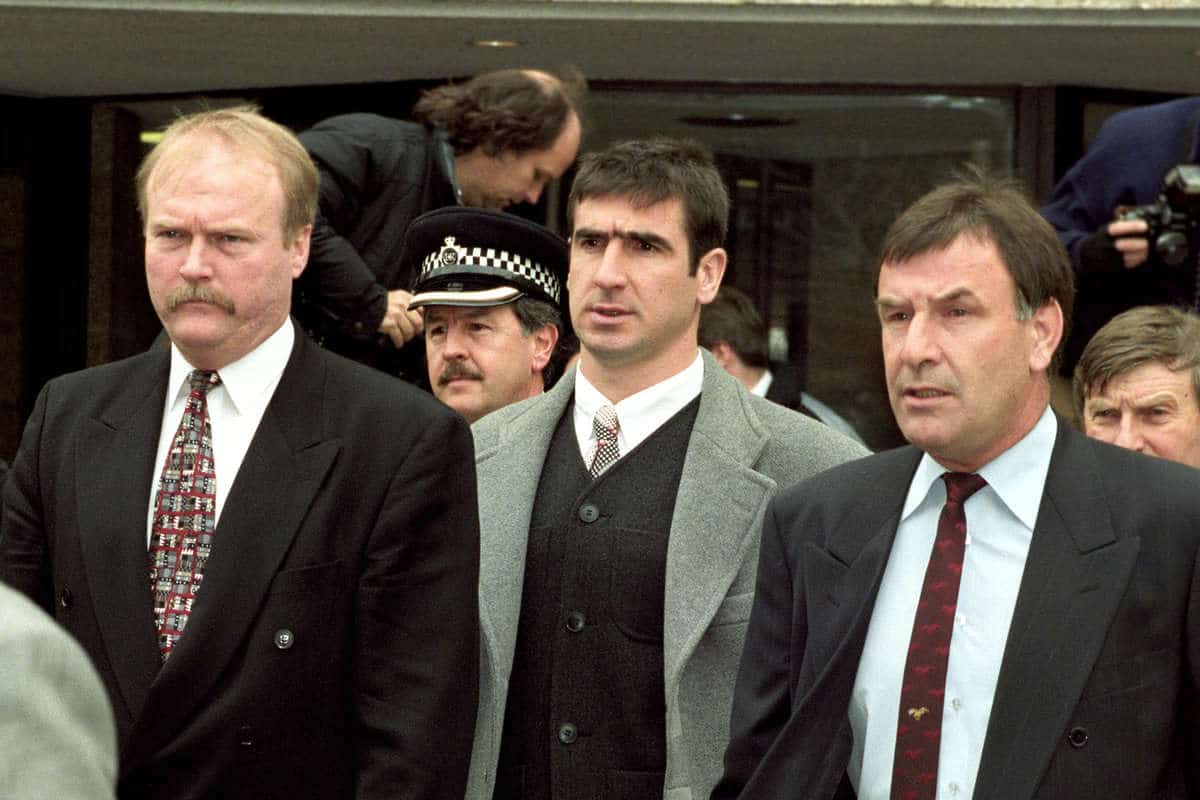 From pretty much a standing start Cantona planted his right foot, studs up, into the chest of a startled Simmons as the stadium held its collective breath. If that wasn’t enough, the number 7 then managed to untangle himself from the fencing, get back to his feet and swing a punch in the direction of his “victim.”

As Davies eventually pulled him back, the initial response among the bystanders was one of utter dis-belief with pictures of the incident in the papers the next morning showing onlookers in open-mouthed shock in what they had seen.

With Cantona’s team-mates’ still re-organising only a huge roar alerted them that something untoward was happening and assuming their colleague had been attacked, several of them ran half the length of the pitch to get involved. “I think I was one of the only players that didn’t actually run over,” explained United defender Gary Pallister. “I think I just stood there. I was more in shock.”

Eventually Cantona was wrestled away and marched down the tunnel by United’s Head of Security, Ned Kelly and a number of police officers, as his fellow players came under fire from a range of missiles and even a cup of hot tea that covered United’s ‘keeper Peter Schmeichel. “All I saw was Eric in trouble. We were a team. We were all in it together, whatever,” the big Dane later explained.

Such was the enormity of what happened in that 56th minute that what happened in the remainder of the game has been lost in the mists of time for many, even those involved. For the record it finished 1-1 with David May scoring his first league goal for United – a statistic overlooked due to what had gone on beforehand. “Just my luck it was in that game,” he later joked. “I don’t think a single picture of it appeared in any newspaper. They all seemed more interested in something else that happened that night.” 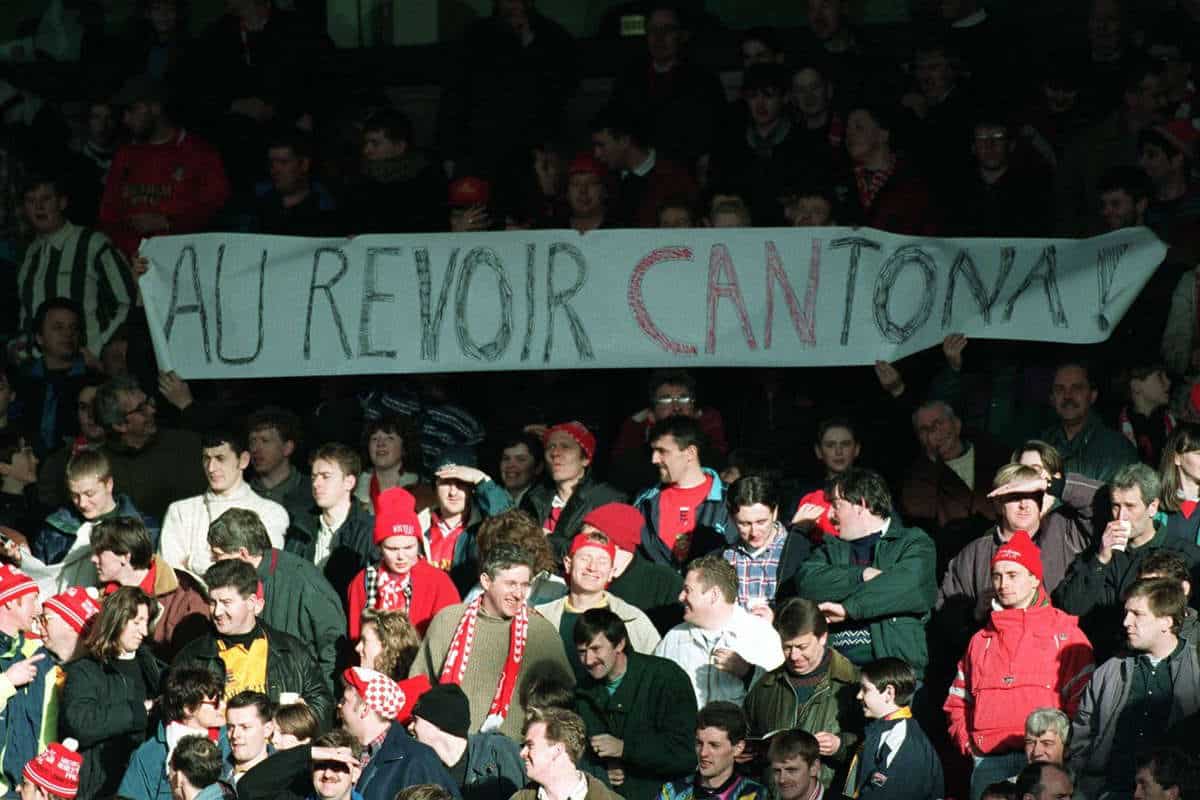 Graham Kelly, the Football Association’s chief executive, called it “a stain on our game,” while Alex Ferguson, somewhat unsurprisingly blamed the referee – “If you’d done your f***ing job this wouldn’t have happened,” were words he allegedly used. Nevertheless, the club fully expected to feel the full force of the law.

But they decided to act immediately, announcing that Cantona would not play for the remainder of the season; but the FA decided that this was insufficient punishment and extended the suspension, meaning he' be out until October, he was also fined £20,000 for good measure.

His actions meant he would later be charged and found guilty of assault and was sentenced to two weeks in prison, a term which was later reduced to 120 hours community service that allowed the Frenchman to work coaching local school kids in Manchester. Simmons was also charged with using threatening behaviour towards Cantona and, on being found guilty, jumped across table and attacked the judge with security officers having to restrain him.

Probably the greatest consequences of what happened that night was felt by his United side. Prior to that night they were handily placed, looking to kick-on and add to their recent haul of trophies; but without their French talisman they looked a completely different outfit.

They eventually lost the Premier League title by one point to Blackburn that season in a campaign that went down to the final day of the season and we can only guess what impact Cantona would have had on a United side who stuttered in those vital closing stages.

Many felt he would never play again. That summer and while his United teammates headed off to Malaysia on a pre-season tour, Cantona was holed-up in a Manchester hotel before fleeing to France and handing in a transfer request. A combination of Simmons’ actions and what he saw as a lack of support from those within the game had taken its toll and he wanted to be part of it no more.

Ferguson was determined to keep his man, however, and followed him to France. “I don’t want him to leave and am determined that he will stay.” was his rallying cry. It proved to be one of his greatest pieces of man-management as he eventually persuaded Cantona to change his mind and come back to the club. Several years – and two successive league titles – later Ferguson claimed that his visit to Paris had been “one of the more worthwhile acts I have performed in this stupid job of mine.”

While fans, journalists, players and pundits still debate who was right and who was wrong that infamous night, over two decades later it’s clear that Eric Cantona remains full of remorse when it comes to his actions as he left the Selhurst Park pitch. Talking to Andy Mitten, Editor of United We Stand magazine, and asked if he had any regrets, Cantona claimed: “I didn’t punch him strong enough. I should have punched him harder.”