For many it has become something of a footballing JFK moment: “Where were you when you heard that Eric Cantona had signed for Manchester United?” But as well as being a huge talking point, both at the time and today, obtaining the services of this enigmatic and unpredictable Frenchman would ultimately transform the fortunes of the Old Trafford club and its manager for the next two decades.

It’s November 1992; a year which the Queen later labelled “annus horribilis” after her son Charles announced that he planned to divorce Diana, his wife of 11 years and a fire at Windsor Castle had caused huge damage to one of her many homes.

Things weren’t too rosy for Manchester United either as the previous Easter they had virtually gifted the league title, which they appeared to have in their grasp for most of the campaign, to bitter rivals Leeds United after a rotten spell of form, and a fixture pile-up at the end of the season proved to be costly.

It had been United’s best chance to win the title – a prize which had eluded them for a quarter of a century – and they had blown it, leading many to wonder if they would ever get their hands on a trophy that they hadn’t won since Matt Busby had guided Best, Law, Charlton et al to glory in 1967.

Despite the obvious disappointment the recent near miss had far from galvanised Ferguson’s men, who rather than building on their flirtation with a title challenge and moving forward, appeared to be still reeling in a state of shock. They had lost the opening game of the 1992/93 season and wouldn’t win again until the fourth game at the end of August as another pop at winning the league looked far from likely.

The autumn had brought about something of an upturn in form but the club was still suffering the mother of all depressions having seen the league title slip through their fingers back in the spring. They were eighth in the table and out of two cup competitions already, after a short-lived assault on European silverware ended with a penalty shoot-out in Moscow, despite their opponents missing their first two spot-kicks. 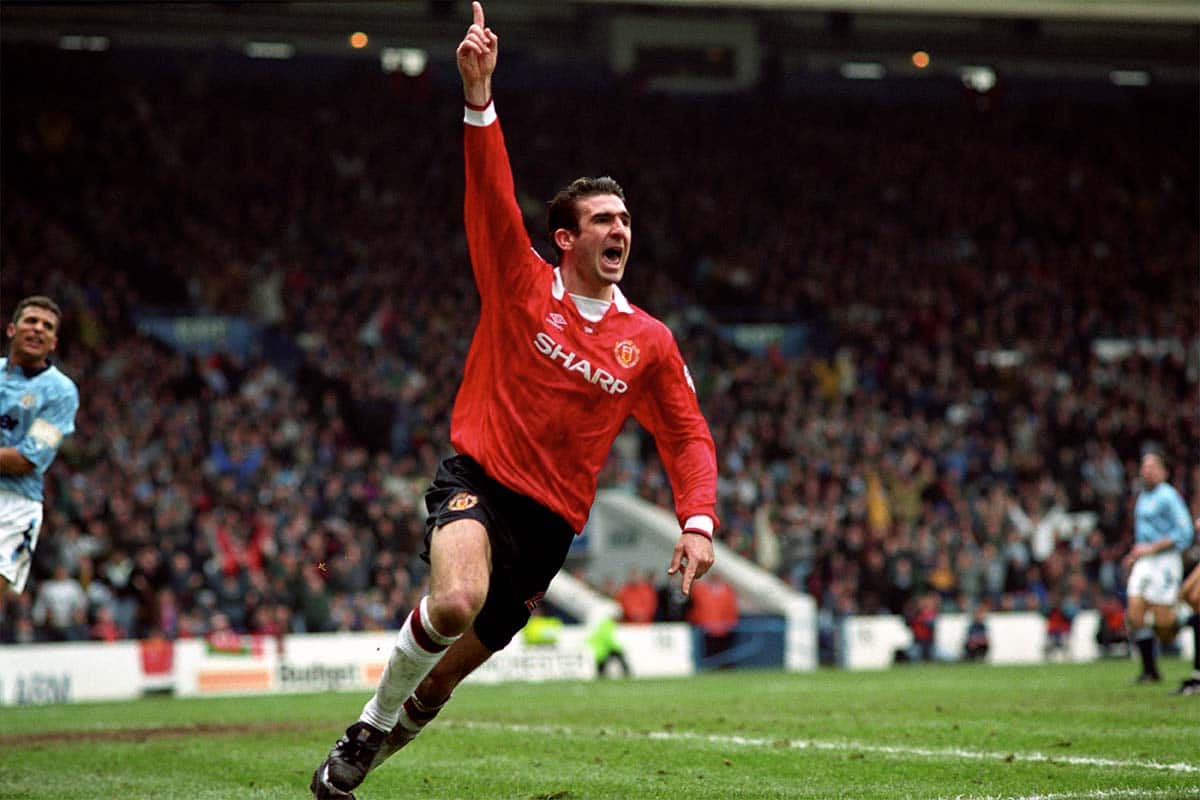 United had won only two of their last 13 games, scoring just nine goals. Dion Dublin, who had joined that summer, had broken his leg and the team simply couldn't find the net as attempts to sign David Hirst and Alan Shearer fell through. United initially turned their attention to Mick Harford and Lee Chapman but would eventually opt for a player who wasn’t even on NASA’s radar at the time.

Instead of going for a traditional, old school front-man, who patrolled the penalty area and fed off scraps and half-chances, Ferguson thought outside the box, quite literally. The United manager was willing to take risks and trust the instinct that would eventually see him become one of the most respected coaches in the game and his next move proved to be a masterstroke.

Eric Cantona had been involved in the Leeds side which had pipped United to the title the previous season but had played more of a cameo role, struggling to hold down a regular place in a team which contained players like Rod Wallace, Gary Speed, Gary McAllister and Lee Chapman. His maverick ways and general attitude didn’t sit well with the rather draconian ways of manager Howard Wilkinson either. 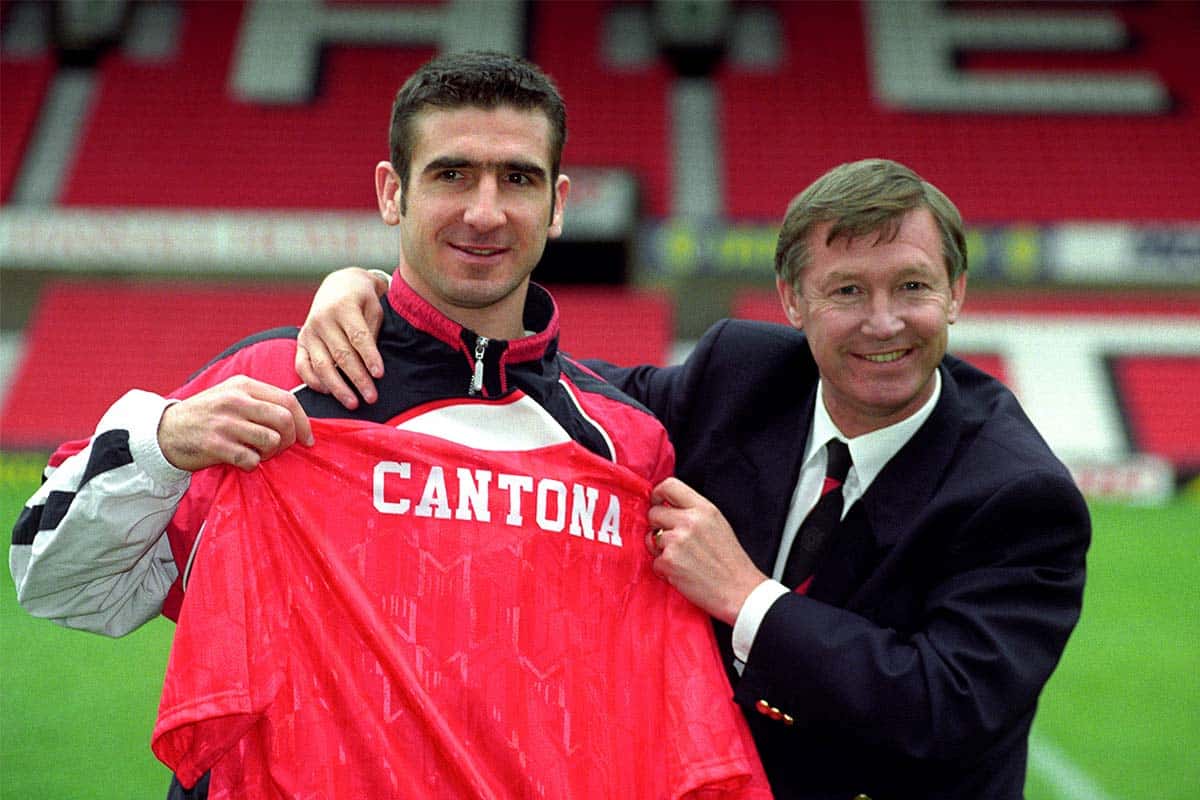 Ferguson, though, was prepared to try anything, knowing that a recent failed title bid wouldn’t necessarily buy him much more time with a board who had been more than patient over the previous six years or so. Having been recommended by then France manager Gerard Houllier, who saw the benefits of Cantona playing regular first team football again, one of the most unexpected transfers in the history of the game was about to be sealed.

Legend has it that as Ferguson and his then Chairman Martin Edwards were meeting at Old Trafford to discuss potential strikers on their shopping list Edwards's phone rang. It was the Leeds managing director Bill Fotherby, who was enquiring about the possibility re-signing United full-back and ex-Leeds man Denis Irwin.

Edwards shunned Leeds United’s approach immediately but then took the opportunity to ask if Leeds might seel them their initial transfer target, Chapman. As he did so, Ferguson started trying to get a message across and making hand signals. When that didn't work, he apparently scribbled the name of Cantona on a piece of paper. Edwards passed-on the message to his counterpart and Fotherby said he would get back to him within 24 hours. He was good to his word but he only needed 60 minutes.

So on November 26th 1992 Eric Cantona found himself crossing the Pennines to sign for Manchester United in a deal worth just £1.2 million. When Ferguson's assistant, Brian Kidd, was told how much he had cost, he asked: “has he lost a leg or something?”

Some years later Alex Ferguson revealed in his book “Leading” that, following a win over Leeds in September 1992, he jumped in the bath to celebrate with his players only to hear them going on about the talents of the Frenchman, from that moment the seed had been planted and just two months later he finally had his man.

United finally had the catalyst that they needed. A man who not only scored goals but  created them too, while also elevating the performances of those around him, thanks to his supreme confidence and self belief.

At the time Ferguson described Cantona as his team’s tin opener, though many were worried the only thing he would be opening was a can of worms due to his troubled past and inability to settle. In later years Bryan Robson claimed he was worried about Eric’s reputation for “flitting from club to club, staying nowhere very long and generally causing trouble.” While Mark Hughes said he “wondered whether it would end in tears.”

Neither had reason to worry as Cantona’s arrival had an almost immediate impact on the team. Despite not taking to the field due to failing to be registered in time, two days after his signing United travelled to Arsenal on November 28th and won 1-0 in what was to be a run of nine games without defeat, a run that included seven wins – his impact was quite literally immediate.

When he did finally make his first appearance as a substitute against Manchester City on December 6th 1992 it became clear why Ferguson had put his job and reputation on the line to sign him. “He swaggered in, stuck his chest out, raised his head and surveyed everything as though he were asking: ‘I'm Cantona. How big are you? Are you big enough for me?'” Ferguson later explained.

Cantona's arrival brought with it a winning mentality and made a group of experienced players think about the game completely differently, while trying to express themselves in a way they simply wouldn’t have considered before.

As well as the turnaround in results Cantona was presiding over a number of key performances that installed a mentality of never giving up, something which had been so noticeably absent the previous season when United collapsed so spectacularly. 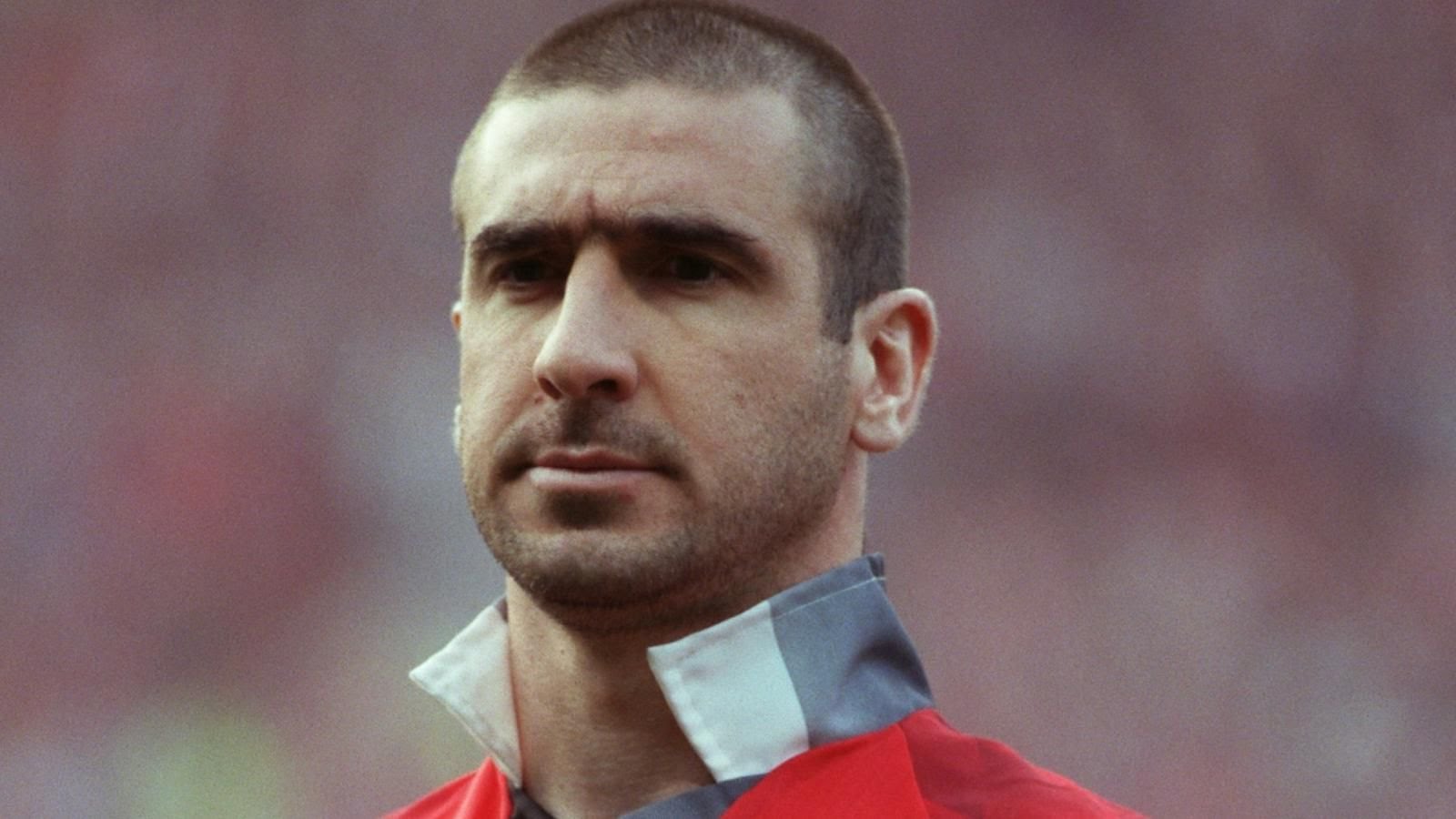 He sealed an incredible fight back from 3-0 down at Sheffield Wednesday on Boxing Day, was instrumental in a 5-0 thumping of Coventry and presided over a 4-1 thrashing of Tottenham at Old Trafford in January. All of which resulted in United finally getting their hands on the league title and the newly formed Premier League trophy after a wait of over a quarter of a century.

Of course United had a talented group of players before his arrival but it’s hard not to make the comparison between that side prior to Cantona’s signing and how they fared after he joined. United played 37 league games in 1992 prior to his arrival, collecting 54 points and scoring just 38 goals. In the next 37 league games they collected 88 points and scored 77 goals.

United won four titles in five years with Cantona in their ranks and would surely have won another had he not tried to take the law into his own hands at Selhurst Park in 1995. His influence and new-found professionalism also made a huge impression on a generation of young players including Paul Scholes, David Beckham and Gary Neville who were coming through the ranks when he first arrived.

Cantona shocked the footballing world when he retired at the end of the 1996/97 season, ending his time at Old Trafford with four Premier League titles, two FA Cups and 80 goals in less than five years at the club. “If ever there was one player, anywhere in the world that was made for Manchester United, it was Cantona,” Alex Ferguson later said about surely his greatest signing.