Uruguayan playmaker Enzo Francescoli was loved everywhere he played; from Montivideo to Paris, Marseille to Buenos Aires, El Príncipe (The Prince) was adored for his unassuming, shy manner, and his exquisite skill with a ball at his feet.

Starting out at Montevideo Wanderers, his hometown club, the young Francescoli caught the eye with his flawless technique and ability to make the game look easy.

He would glide along the pitch, swerving past defenders and slotting perfectly-weighted through-balls without breaking stride.

An under-20 South American champion with Uruguay, Francescoli made his senior international debut at the age of 20 in 1982. And after starring for the Celeste during the 1984 Copa America he drew the affection of Argentinian giants River Plate, who moved quickly to sign him for around $300,000 that year.

And it was with River that Francescoli’s career really began to blossom, but only after enduring a difficult start to life in Buenos Aires.

Results were disappointing in Francescoli’s first season at the Estadio Monumental, with the club enduring a below par domestic season, and the following campaign saw Francescoli largely overlooked for first-team selection.

But towards the back end of that second season, Francescoli forced his way into the team and helped Los Millonarios to finish runners-up in the national championship.

These performances – El Príncipe closed the year on 29 goals from 49 games for River — coupled with his form for the Uruguayan national team, led to Francescoli being crowned the 1984 South American Player of the Year. And the following season, he was named the best player in Argentina, becoming the first non-Argentinian to ever win the award. 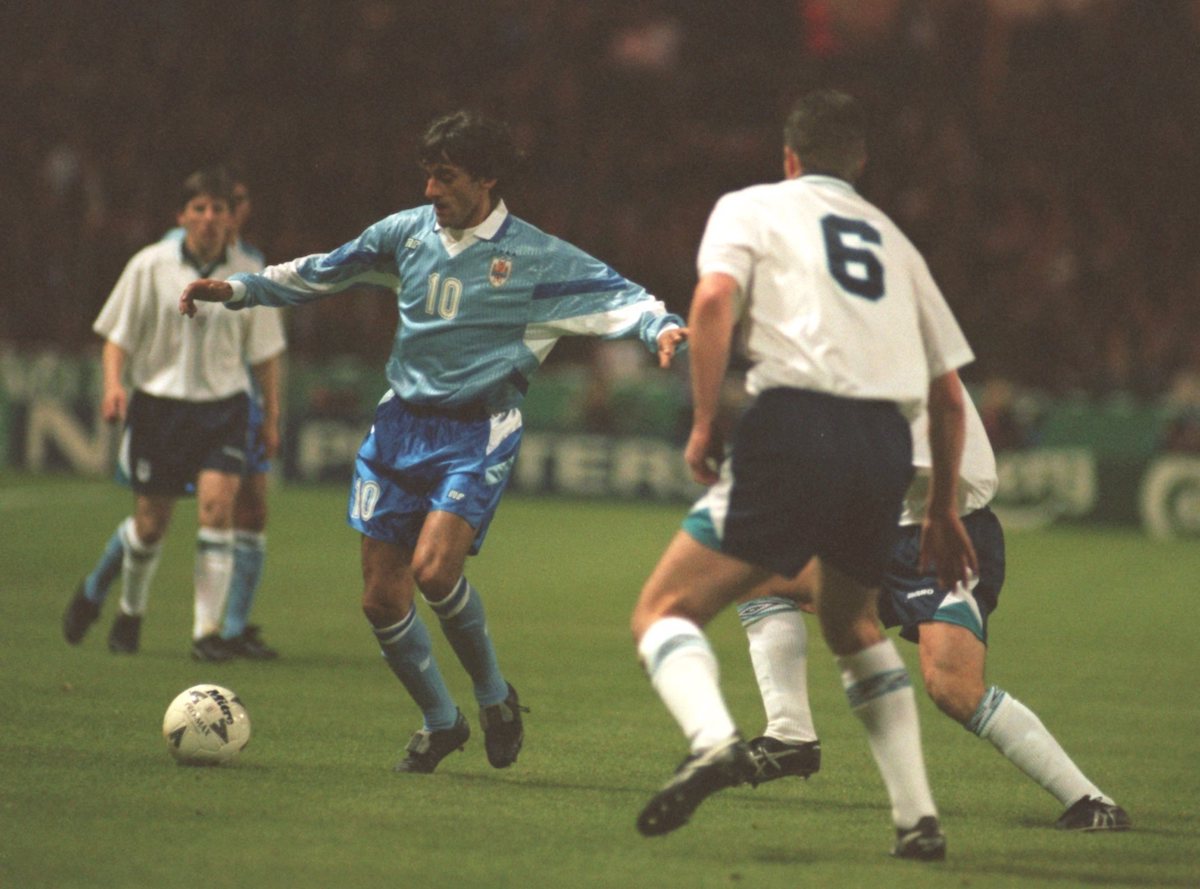 Francescoli was pivotal to River’s run to the 1985-86 national championship, finishing as the division’s top-scorer with 25 goals, which included netting twice in a dramatic and decisive 5-4 victory in the final game of the season – the first of which was an acrobatic bicycle-kick which is perhaps his most famous goal.

Francescoli guided Uruguay to the first knockout round of the 1986 World Cup in Mexico, only to be defeated by eventual champions Argentina. Following the tournament, a move to RC Paris would give him his first taste of European football.

The Parisian outfit had just been promoted to the French top-flight and, backed by automotive company Matra, had money to spend. The club managed a respectable mid-table finish in Francescoli’s first season, and the Uruguayan finished as the league’s highest goal-scorer with 14 goals, marking him out as one of the bright new stars of the European game.

RC Paris, or Racing Matra as they had by then become known, flirted with the top end of the table during the 1987-88 season and, after turning down an offer from Juventus to replace the retiring Michel Platini, Francescoli remained with the Parisians for another year, scoring the goals that helped the club stave off relegation.

Despite not playing for one of the continent’s leading teams, by this point, Francescoli was regarded as one of the stars of world football, and when an offer came in from Olympique Marseille in the summer of 1989, he took his chance to move to a bigger club.

In his single season at the Stade Velodrome, Francescoli scored 11 goals from 28 games to clinch the French First Division title for l’OM, and he helped his new club reach the semi-finals of that year’s European Cup too.

And it was while entertaining the crowd inside the Satde Velodrome that Francescoli caught the eye of a young and impressionable Zinedine Zidane, who at the time was playing for Cannes. Zidane still lists Francescoli alongside Platini as he favourite ever player, and even named his first-born son Enzo in tribute to the Uruguayan star.

Without Francescoli’s influence, Racing Matra struggled desperately and were relegated back to the Second Division.

Just as in 1986, the 1990 World Cup in Italy saw Francescoli’s Uruguay eliminated at the last-16 stage. As was the case four years earlier, after the competition ended, Francescoli was on the move, signing for Italian club Cagliari, along with international team-mates José Oscar Herrera and Daniel Fonseca.

Francescoli endured a difficult start to his career in Serie A, having to adjust to a role deeper in midfield to that which he was accustomed, and his goal-scoring output suffered. But by the 1992-93 season, he had found his feet at the Stadio Sant’Elia and his growing influence helped the Sardinian side finish sixth in the table, earning UEFA Cup qualification. To this day, the Uruguayan is remembered as one of the club’s greatest ever players.

A single season with Torino followed. After initially battling relegation, Francescoli helped Il Toro climb to secure UEFA Cup qualification, as well as guiding his new club to the Cup Winners’ Cup quarter-final, where they were defeated by eventual winners Arsenal.

Despite the team’s success, Francescoli’s productivity was diminishing, having netted just three times in Serie A that season. Now 32, the Uruguayan decided to return to River Plate in the summer of 1994.

The returning hero had an immediate effect, as River went undefeated in winning the national championship.

In 1995, the 33-year-old Francescoli was the catalyst in River’s run to the semi-final of the Copa Libertadores, and his performances were rewarded as he was once again named South American Player of the Year.

The following season, after retiring from international duty having earnt 73 caps for the Celeste, Francescoli led a crop of immensely talented youngsters – including the likes of Juan Pablo Sorín, Marcello Gallardo, Hernan Crespo and Ariel Ortega – to a historic double, as River won both the Copa Libertadores and the Argentinian championship.

Francescoli retired from the game in 1997, citing stress issues, for which he would later seek therapy, as the determining factor in his decision to hang up his boots. But he went out in style, winning the last ever edition of the Supercopa Libertadores in his penultimate match and, by virtue of a 1-1 draw with Argentinos Juniors, clinching the Apertura title in his final outing.

Francescoli is remembered as one of the greatest players of his generation, despite never having a sustained run at one of Europe’s elite clubs.

There were few players in Francescoli’s mould during his career, and there have been few since; he was the perfect blend of elegance and athleticism.