The English teenager, widely regarded as one of the world's hottest talents in his age group, moved to BVB last summer in search of first-term opportunities. Although a league debut came in October – a six-minute cameo versus Eintracht Frankfurt – Sancho has had to wait patently for his maiden start for his new club.

Named in Peter Stöger's first XI for the visit of Wolfsburg, the versatile London-born attacker grasped his opportunity with both hands, showing he is ready for top-level senior football, despite BVB slipping to a disappointing 0-0 draw.

In truth, Sancho really should have scored, hitting the outside of the post from close range, albeit a tight angle. A goal, not to mention one that would have secured a valuable three points for his side, really would have capped what was an impressive full debut.

But even without finding the net, the England Under-19 international showcased exactly why he is one of the game's hottest teenage talents, demonstrating not only eye-catching skills, but also an encouraging maturity and game-intelligence.

An injury to American superstar-in-the-making Christian Pulisic meant the former City man was promoted to line-up to take on the Wolves. Starting on the left wing in Dortmund's 4-3-3 and playing the full 90 minutes, Sancho outshone fellow teenager Alexander Isak, the expensively acquired Swedish striker who had come in for the absent Pierre-Emerick Aubameyang.

Omitted for disciplinary reasons amid rumours of an imminent move to the Premier League with Arsenal, Aubameyang's exclusion was seen as presenting Isak with the chance to show he is ready to step up and fill the Gabonese striker's boots. But it was Sancho who took the majority of the plaudits.

While Andriy Yarmolenko particularly wasteful on the right side of attack, and with Isak fairing no better centrally, Sancho proved to be BVB's most effective attacker, involved in many of his side's best moves.

As Shinji Kagawa and Mario Götze pulled the strings in midfield, Sancho was a willing recipient of the ball throughout, showing no signs of nervousness and exuding supreme confidence in his ability to perform on such a stage.

Of the players who started for Dortmund, none could match the 17-year-old's three completed take-ons, while he also chipped in defensively with two interceptions and one clearance. And none of BVB's attackers saw more of the ball than Sancho (63 touches). 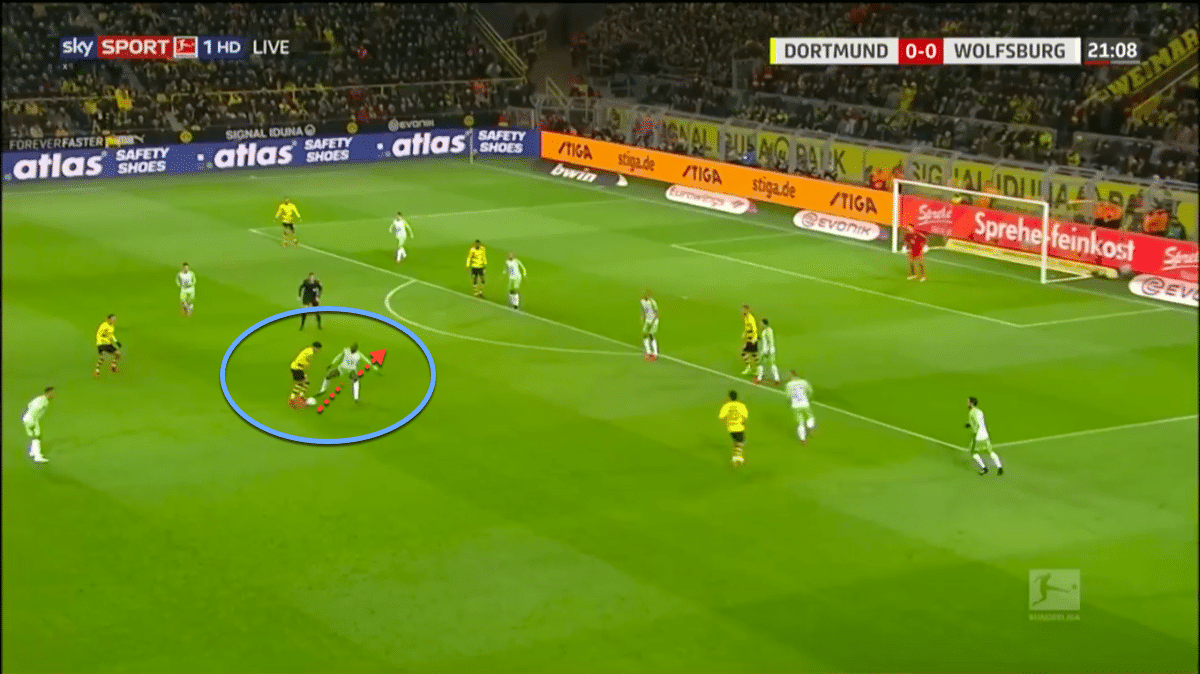 The above still shows just how confident Sancho appeared in his first league start in Germany (which made him the first English player to start a Bundesliga game in Dortmund's history). Collecting the ball on the edge of the attacking third, he embarrasses his marker with an audacious nutmeg. 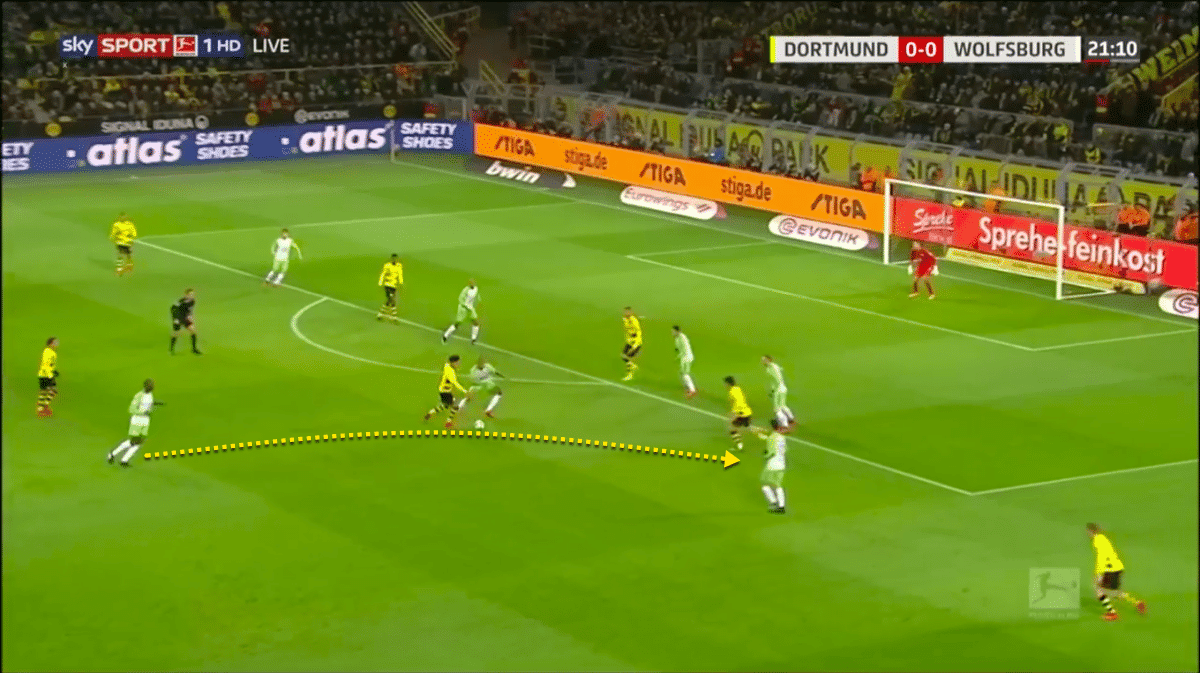 He then takes on the second defender who comes to close him down, dribbling towards the right side of the penalty area and drawing the attention of multiple Wolfsburg players. 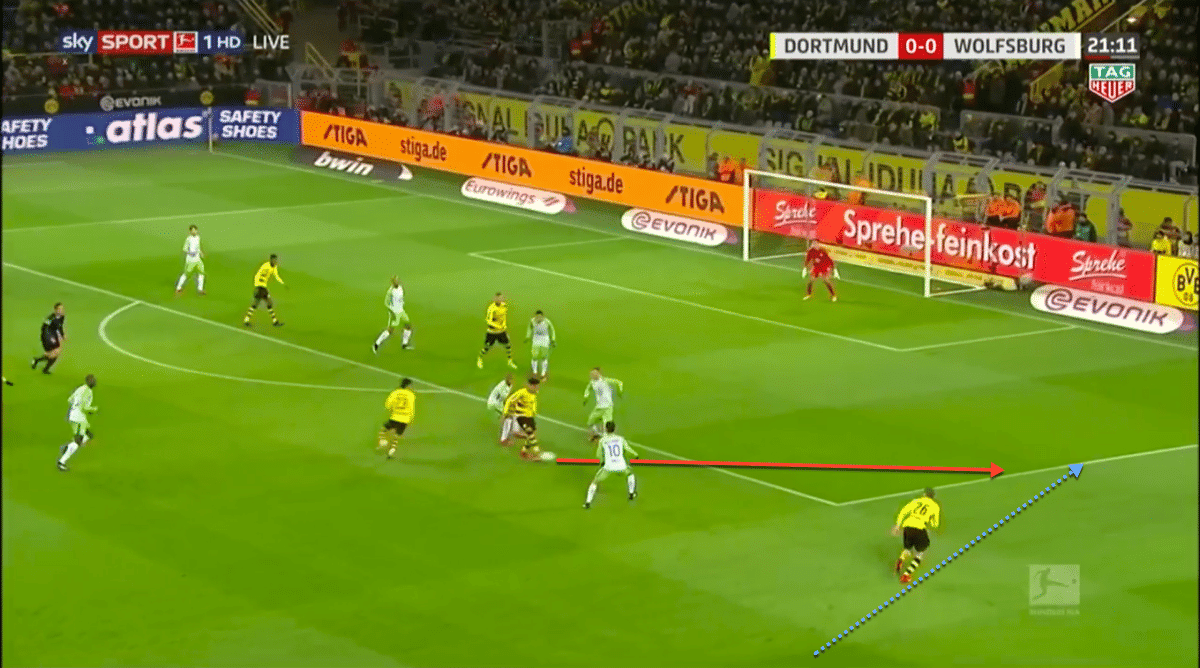 With three opponents hurrying to halt his progress, Sancho's run has opened up space for right-back Lukasz Piszczek to break into. The English winger astutely picks out the Polish international. 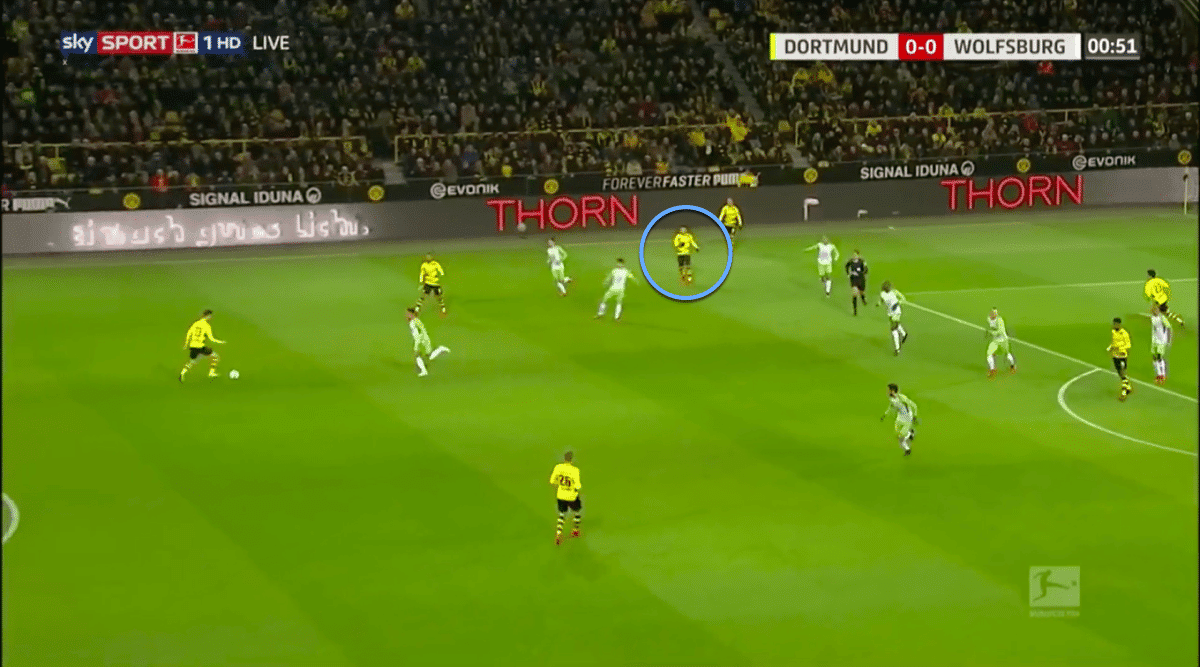 This time we see Sancho's intelligence and maturity. The Dortmund No.7 (circled), was always on the hunt for pockets of space whenever BVB circulated possession, never shying away from making himself available. 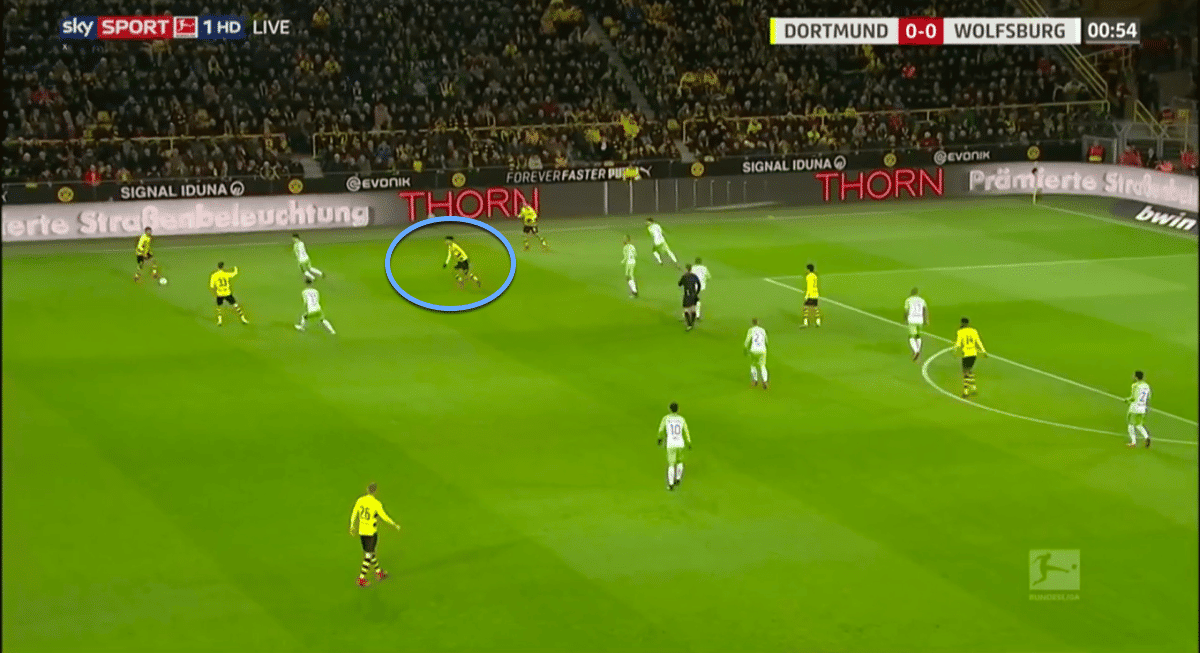 Having moved inside from his station on the left flank, Sancho finds space between the lines and demands the ball from his team-mates. Although he doesn't receive possession right away, he continues to occupy the space he has discovered, avoiding the attention of the Wolfsburg defenders. 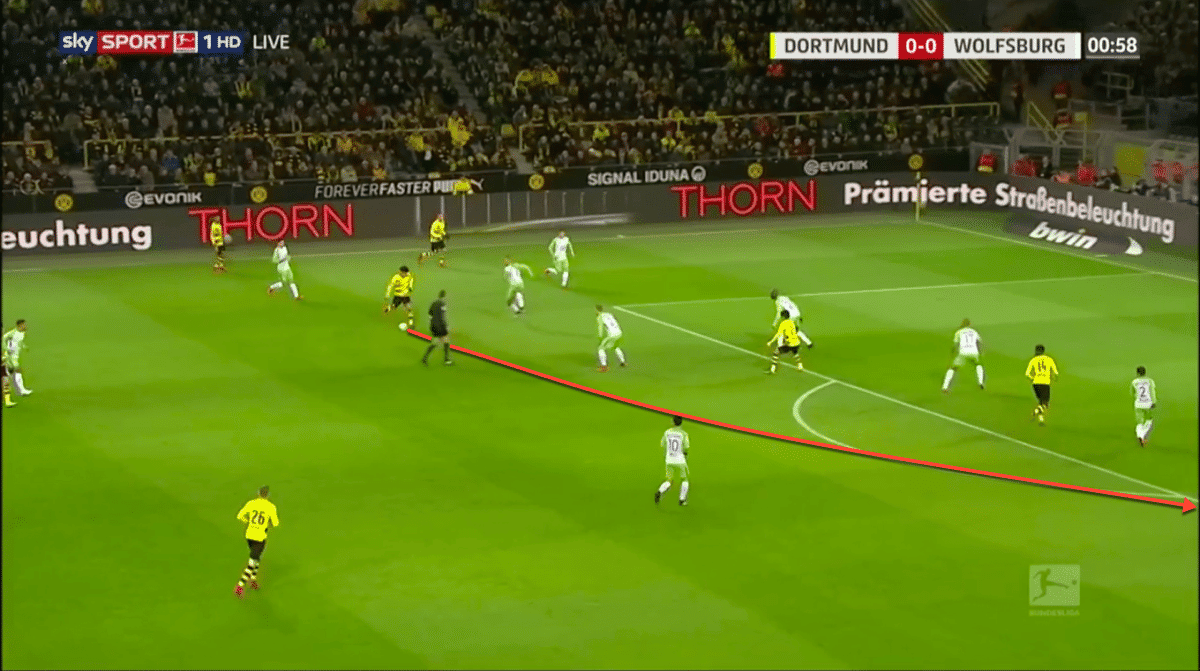 When finally on the ball, Sancho immediately has his head up and switches play to the opposite flank, again picking out the advancing Piszczek in space.

This ability to make ‘third-man' movements to find space in advanced areas, coupled with the vision and technique to play a 30-yard ball to exploit an overload on the far side, shows Sancho's appreciation and understanding of the kind of positional play espoused by Thomas Tuchel during his time in charge at Signal Iduna Park – an advanced method of play that many experienced players struggle to grasp.

“I'm in a happy place at the moment,” Sancho told Bundesliga.com after the game. “I'm just thankful again that the manager has faith in me and all his team. That's a big thing for me because I need to improve as a player. To do that I need to play in games like this, so I'm very happy.”

With assured performances like the one he put in against Wolfsburg, it won't be long before Sancho is a regular fixture in Dortmund‘s starting line-up.