International football is the pinnacle of the world’s most popular sport, transcending the beautiful game itself. At any given time, the 11 selected players are a symbol of national pride tasked with uniting an entire country in euphoria, even if it’s only for a short 90 minutes. Nothing quite beats the excitement of taking on your closest neighbours, however, especially when England and Scotland are involved.

For nearly 150 years, football’s oldest international rivalry has produced some of the most iconic moments in sporting history whilst additionally laying the foundations for the development of international football as we know it. In total, the two nations have faced off on 112 occasions, with England boasting 47 wins to Scotland’s 41.

But the rivalry is far more than just numbers, and Friday’s 113th clash fittingly falls on a day that means more than any other. FIFA’s absurd interference regarding the right to display a poppy on the kits poetically encapsulates everything about the England-Scotland rivalry, including the elements of unity that underline the sporting rivalry. On the pitch, however, it’s set to be another all-out war between two proud sides who have each endured some difficult moments in 2016.

Let’s take a look at how the rivalry developed.

The Birth Of International Football 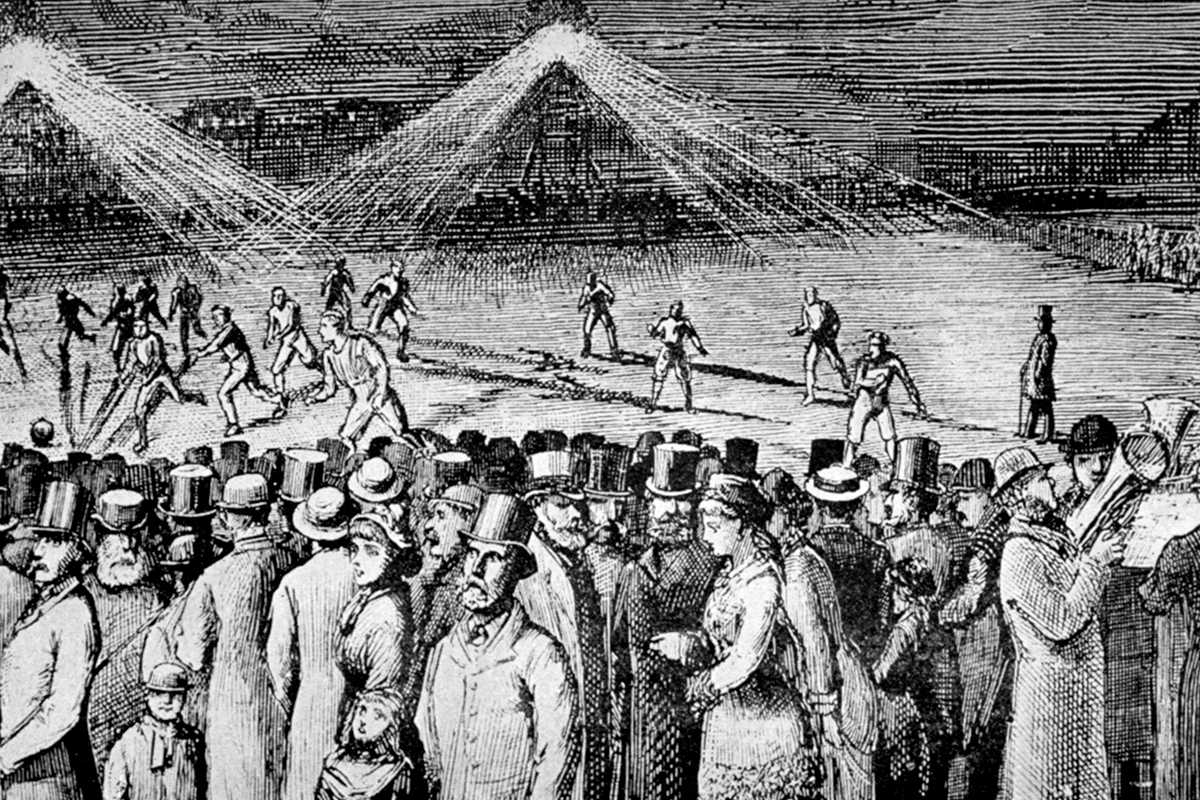 Football wasn’t the first modern day sport to embrace the rivalry between the two most populous home nations. International cricket matches had started decades before the introduction of football in 1872, which itself came hot on the heels of the first international rugby game in 1871.

The first officially recognised international football contest saw Scotland and England draw 0-0 at Hamilton Crescent cricket ground on St David’s Day in front of 4,000 spectators. The scoreline suggests that those fans weren’t treated to the best entertainment, but they had witnessed history being made. Moreover, the match itself was used as a platform to accelerate the establishment of the SFA, which came just days after the return match at London’s Oval cricket ground in March 1983.

Those fixtures had been preceded by a series of unofficial matches in 1870 involving representative teams from the two countries. However, the five-game series was restricted to players based in London and were not recognised as international matches. Nonetheless, it was further evidence that the concept of football games between competing nations had a future.

Annual meetings continued for the next decade, with venues alternating between London and Glasgow until Sheffield’s Bramall Lane hosted the 1883 edition, which was won by the visitors via a 3-2 scoreline. In fact, Scotland dominated those formative years and were the victors in eight of those opening 12 meetings, with England winning just twice.

Football’s first international rivalry, supplemented by the introduction of the women’s teams in 1881, was now in full swing. With the introduction of Welsh team in 1876, followed by an Irish squad in 1882, the four nations united to create international football’s first tournament. In 1883-84, the inaugural British Home Championship was launched.

Scotland continued their dominance, clinching a crucial 1-0 victory over England thanks to John Smith’s early goal, en route to winning the first Home Championship crown with a 100 percent record from their three games.

The Tartan Army continued to get the better of England in head-to-head clashes as well as the tournament itself. Scotland either won or shared the trophy in six of the opening seven editions, losing just once against the Auld Enemy in the process. The Three Lions enjoyed a resurgence in the final decade of the century, but still entered the 20th century trailing their fiercest rivals with just nine wins to Scotland’s 14.

Spoils were shared fairly evenly leading up to World War I, which forced the Home Championship into a hiatus. Football resumed shortly after the war, with England overturning a 4-2 deficit to prevent Scotland winning the 1920 tournament thanks to a dramatic 5-4 victory. However, Scotland enjoyed a fruitful spell leading up to World War II, winning 11 and losing just five of the next 19 encounters.

By now, the heat between the rivals had reached a new level, with virtually every meeting delivering intense excitement for fans of both nations. A 5-1 thumping of the Three Lions in 1928 by a team affectionally donned the Wembley Wizards is still regarded as one of the finest performances by either side in the rivalry.

World War II forced official matches into a second hiatus, although unofficial matches (including an unofficial Home Championship held in 1945-46, which was won by Scotland) still occurred on a relatively frequent basis as a tool for boosting morale. While the first official match after the war ended in a 1-1 draw, England dominated the next few years winning seven and losing just one of the 10 encounters throughout the 1950s.

The following decade saw football in general undergo a palpable transition, with the sport evolving into the beautiful game we know and love today. From tactics on the pitch to philosophies behind the scenes, the entire game was changing – and it saw the widespread appeal grow too. Inevitably, the oldest rivalry in international football became more entertaining, encapsulating, and important than ever. While the decade produced plenty of drama, two matches in particular stand out as two of the most iconic in 144 years of history.

In 1961, Bobby Robson opened the scoring at Wembley after just nine minutes as England recorded a record 9-3 victory in front of over 97,000 people. The Three Lions won that year’s Home Championship while the next summer saw Walter Winterbottom’s men put in arguably their best performance at a World Cup to date. Following a mangerial switch after the tournament, England achieved even greater success four years later as the heroes of ‘66 produced the nation’s finest sporting moment.

England had also beaten Scotland en route to winning that year’s Home Championship, but the Tartan Army exacted their revenge just one year later by beating the newly crowned world champions, who were unbeaten in 19 games, with a 3-2 win at Wembley. After the victory, the Scots taunted their rivals, claiming that they were now the unofficial world champions.

However, it was England who continued to dominate from the late sixties through to the demise of the Home Championship in 1983-84, winning the lion’s share of head-to-head encounters while also lifting the trophy more often than not. In fact, by the time the tournament ceased, England had clinched 54 titles (including shared) compared to Scotland’s 41. Though the rivalry between all four nations had ended, the England-Scotland battle continued for another five years courtesy of the Rous Cup; the England team, managed by Bobby Robson, won three of those five encounters also.

After over a century of annual matches (wartime aside), the longest-standing rivals in world football have met just five times since the start of the 1990s. If anything, though, the lack of frequency has made those encounters all the more ferocious. 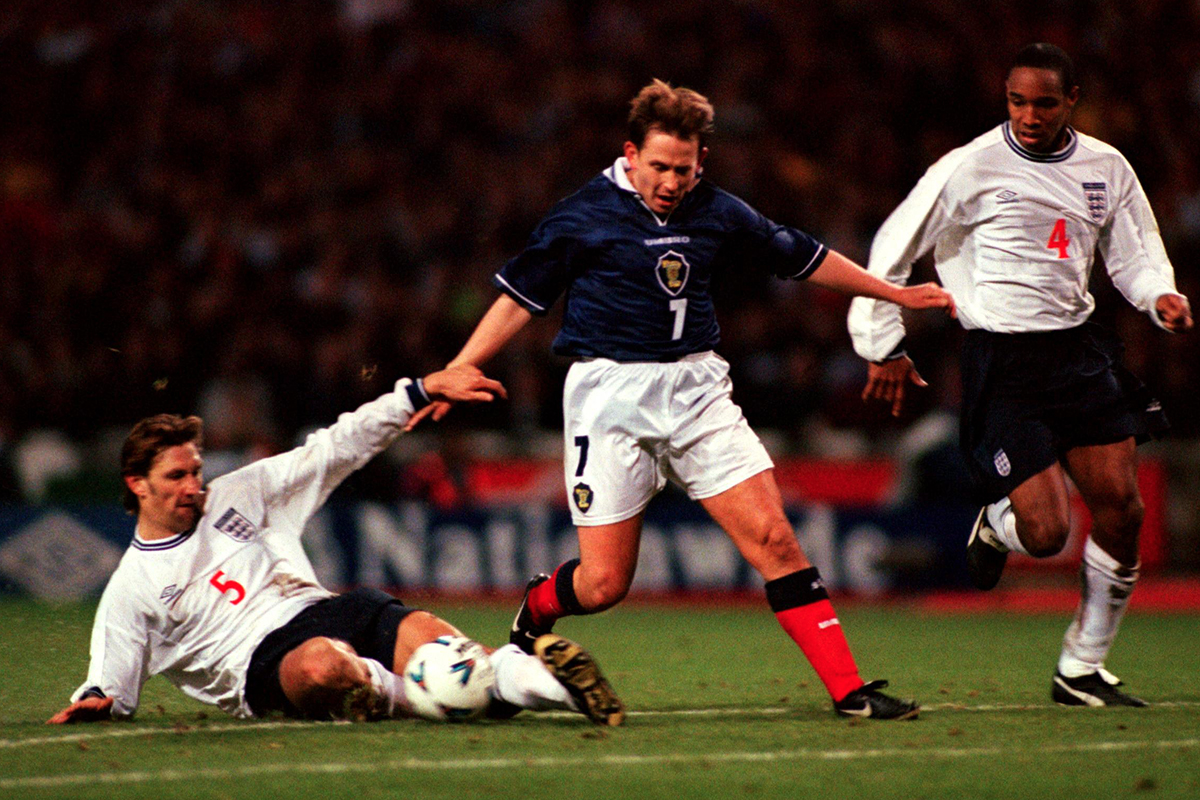 At times, Home Championship matches had doubled up as the qualification process for major tournaments. However, the sides didn’t meet on the big stage until Euro ‘96, which just happened to be held on English soil. The meeting at Wembley is arguably the most memorable of all 112 meetings, and it certainly provided the rivalry’s lasting image.

Ask any England fan under the age of 50 for the best Three Lions goal of their lifetime, and most will say Paul Gascoigne’s from June 15th, 1996. The replays of Gazza lifting the ball over a bamboozled Colin Hendry before blasting past Andy Goram come out of the archives for almost every single England game. It’s a moment of sheer euphoria that encapsulates the summer when football came home; even the most passionate Scotland fan would concede that it’s one of the greatest goals in international football history.

The rivalry resumed in 1999 as the two sides met in the qualification play-off for a place at Euro 2000. England may have gotten through to the finals thanks to a Paul Scholes double at Hampden Park, but Scottish fans still take immense pleasure from winning the final battle at the old Wembley.

Friday’s World Cup qualifier will be the first competitive meeting of the 21st century, although the friendlies of 2013 and 2014 did offer a glimpse of the passion we can expect to see. Both matches provided goals, drama, and a phenomenal atmosphere in the stands. Quite frankly, that’s exactly what we’ve come to expect from international football’s two oldest representatives. The first competitive outing in 17 years should deliver those elements too, only on a much larger scale.

Right now, both teams are united by a sense of underachievement, which makes the contest all the more enthralling. On paper, England should be considered the heavy favourites. Scotland will be sniffing for blood, however, especially after England’s poor showings in last month’s qualifiers against Malta and Slovenia. On their day, Gordon Strachan's Tartan Army are more than capable of causing an upset.

Whatever happens, it should be an engrossing battle from the start. White or blue, three points would be huge.