As stories about gambling and Premier League footballers go, there was something quite quaint about discovering Lewis Cook‘s England debut netted £17,000 for a family member.

Back in 2014, Trevor Burlingham placed a bet at 33-1 that his grandson would represent the national team before reaching his 26th birthday. The midfielder's introduction as a substitute against Italy at Wembley on Tuesday, while still only 21 years old, saw win that particular wager.

Coming on for Jesse Lingard with 20 minutes left to play against the Azzurri, the Bournemouth midfielder managed just nine touches, seven of which were passes, in the eventual 1-1 draw.

It is difficult to see whether or not he will have convinced Gareth Southgate to take him to the World Cup in Russia this summer. It is admittedly unlikely yet Cook has no shortage of supporters.

“In my opinion he is good enough to go,” team-mate Jermain Defoe told Bournemouth’s official website last week. “If it’s based on merit then he should be in the squad for how he has played. Ever since he has been in our team he has been unbelievable.

“He has so much potential. If you think of any player in the country around that age, he is definitely up there with the best.”

Speaking in an interview with the Daily Echo, Cherries boss Eddie Howe offered a rather more detailed opinion. “I think one of the things you definitely need in international football is to be good technically and to want the ball, Lewis certainly fulfils that criteria,” the manager said.

“He is very controlled and calm on the ball and has a creative eye, from deep positions and higher positions.”

Featuring as one of two central midfielders in Howe’s favoured 4-4-1-1 formation, the statistics certainly support that view of his performances.

Cook has averaged 2.92 tackles and 1.46 interceptions per 90 minutes in the Premier League this term, but it is when Bournemouth are in possession that he truly shines.

Slowly but steadily, this season has seen Cook translate his obvious talent into on-field production. He's blossoming into the kind of gifted midfield playmaker that England so sorely need.

“He is turning into an integral part of the team,” Howe told reporters at a recent press conference. “When we signed him, we felt there was a lot of work and development to do, but a very talented starting point.” 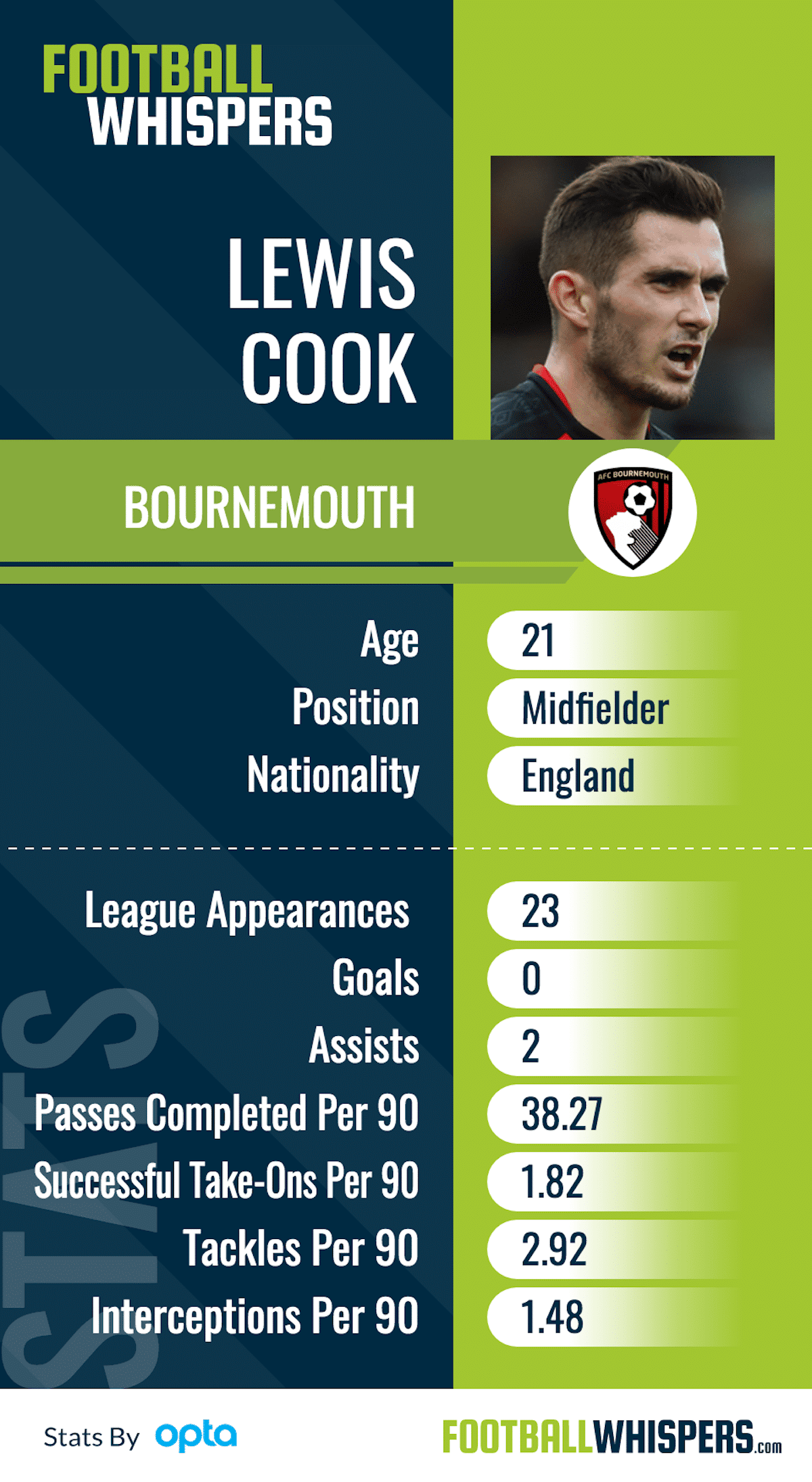 That is no surprise as the man himself admits that at his previous club he wasn't given a clearly defined role, but he has now turned to watching how some of the very best players affect matches.

“At Leeds I didn't have a set position, I was just told to attack or to sit,” Cook told the Daily Mail. “Now I am getting the basics right. I study videos of people like Paul Scholes — his range of passing and timing of runs in the box — and then the leadership of Steven Gerrard.

“I’m also a midfielder who wants to run with the ball, carry it with purpose. Luka Modric and Isco are the best at that and they're who I'm really watching now.”

Perhaps the most important thing is that Cook is the one being watched, and he is moving through the ranks of the England set-up like few others have before.

Captain of the Under-20 side’s recent World Cup win, he knows how important it is that those who follow in his footsteps know their displays at youth level are being noticed by the people that matter: “You can see there is definitely a pathway to the seniors and it's good for us and the other lads to see,” he told Sky Sports.

It would be no surprise for a player who has already experienced tournament success be part of the England squad for this summer's World Cup in Russia. In fact, Cook’s family are probably already betting on it.