It's been a deal in the works for what feels like an eternity but Emre Can‘s long-awaited move to Juventus could soon be official.

Despite Liverpool being in negotiations with the 24-year-old for the best part of two-years, both parties couldn't come to an agreement to tie the former Bayer Leverkusen man down to a long-term deal at Anfield.

According to Sky Sports News, the German powerhouse is set to have a medical in Turin after agreeing a four-year deal with the Serie A champions. If reports are to be believed, Juventus saw off interest from Bayern Munich and both Manchester clubs to snare the 20-cap international.

The 24-year-old played a key part in getting Liverpool to the Europa League final in 2016, he stood in for injured captain Jordan Henderson during the run-in of the 2016/17 season as the Reds confirmed a place in the Champions League play-off stages, and he netted twice in the win over Hoffenheim to confirm their participation on Europe's elite competition.

He's divided fans ever since signing in the summer of 2014 but even his fiercest detractors will admit losing him for free is a blow. The Reds had to fork out £39million to sign a replacement in the shape of Fabinho.

Juventus have been laying the groundwork for some time and if all goes to plan and Can puts pen to paper on the contract offer, it will reiterate why many believe they're the kings of the transfer market.

Can is a Germany international with over 150 appearances for Liverpool across a number of competitions. He doesn't turn 25 until January and has his best years ahead of him. In the current market, he would easily be worth £40million of anybody's money if tied down to a long-term deal. 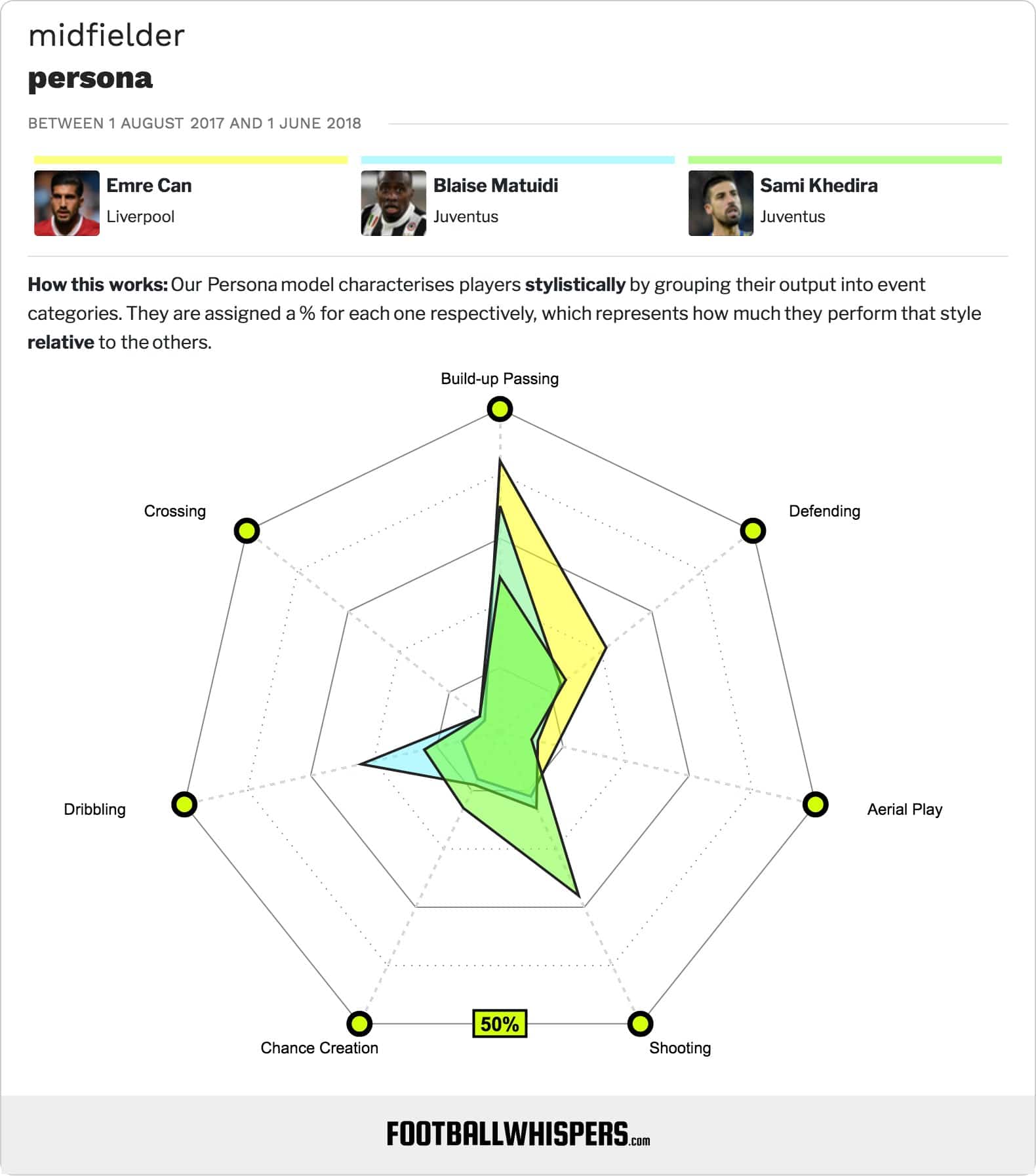 Many believe he's heading to Turin to replace compatriot Sami Khedira and rival Blaise Matudi for a start beside Miralem Pjanić. The graphic above, the player persona exclusive to Football Whispers, backs this up while looking at the styles of the three individuals.

Now, this isn't a typical comparison tool which pits players against one another but instead showcases what each player is characterised by but in one graphic. All three are distinguished primarily by their build-up passing and their defensive actions but do spike in the dribbling department. Khedira takes more shots but profile wise they're near enough identical.

That's stylistically, next up is how Can compares to the Juventus midfielders statistically.

It's important to remember when looking at numbers that the one-time Bayern Munich player has been used as a six and as an eight at times last season and this will have an impact on the stats he's posting. His versatility is a strength as well as a weakness at times. 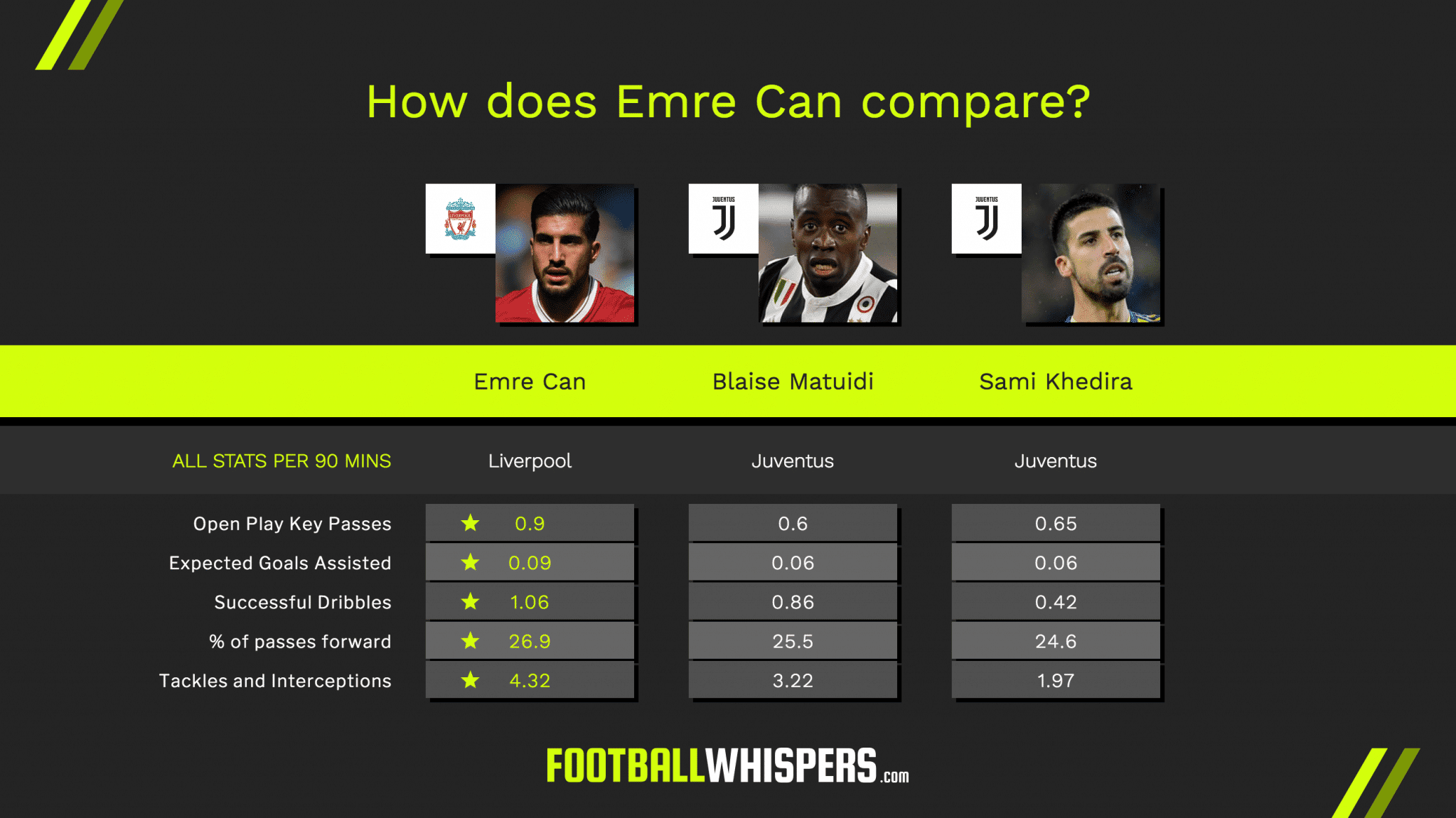 The stats in the graphic above are just a handful of key ones that midfielders should excel in. It shows an impact in the attacking third but also goes some way to highlighting their defensive actions.

Can comes out on top in every category. But, again, it's worth noting that Liverpool are battling it out with five other sides in the Premier League while Juventus are the top dogs in Serie A. The Italian team are, for the most part, utterly dominant so by default won't be as busy defensively.

However, after taking that into account, Can's numbers still paint him as a creative midfielder who drives his team forward whenever possible but is also intelligent enough to quash attacks before the opposition reach the defence. He's a blend between a deep-lying playmaker and a defensive midfielder and could well be the perfect player to compliment Pjanic.

If he finds his feet quick enough, he could be another masterstroke signing by those in charge of recruitment at Juventus.