Emre Can, like many other players in the Liverpool squad, is something of an enigma. He divides opinion on a regular basis and fans flip-flop on how they view the German powerhouse.

One week he looks like a world beater and Liverpool have had a nightmare not tying him down to a longer contract. The next week he's just another passenger who is easily upgraded and the Reds should cash in during this transfer window.

Make no mistake about it, inconsistency has plagued Can's Liverpool career for a number of reasons. But when he's been afforded a sustained run in a particular position and system, it's then you get to see why the Reds moved in the summer of 2014 to pinch him away from clutches of Bayern Munich.

His good form usually comes towards the end of the season but he's impressed early on this time around. He earned plenty of plaudits for his role in Liverpool's 4-2 win over Hoffenheim last week but his performance against Arsenal in the 4-0 victory was arguably better, albeit without the goals.

He's shown in the past week why the £10.5million Liverpool paid for his services was a bargain and why the cub have made a terrible mistake not extending his contract on Merseyside. His current deal expires next summer and Juventus, the masters of the transfer market, are circling.

If Can is able to perform like he currently is for the entire season then Liverpool should do everything they can, and pay whatever it takes within reason, to keep him at Anfield because he's going to be a serious player. Still only 23, he's dominating the middle third almost single-handedly at times.

Liverpool's front three caught the eye and the conversation post-match surrounded whether or not Jürgen Klopp's side still needed Philippe Coutinho meaning Can's man-of-the-match performance went slightly under the radar.

Gary Neville awarded it to Mohamed Salah after the £37million signing scored, assisted and spurned a number of chances against Arsenal. The former Manchester United right-back, however, said Can was a close second – and it's easy to see why.

The middle third was going to be a key area in the match with both teams having suspect defences and potent attackers at their disposal. Whoever won the midfield battle was more than likely going to win the overall contest.

And it was abundantly clear from the off that Liverpool had the upper-hand. Jordan Henderson sat deepest and the captain was flanked by Can and Gini Wijnaldum. The trio dominated the ball and dictated the space while Granit Xhaka and Aaron Ramsey were left chasing shadows.

Can, in the absence of the injured Adam Lallana, has been given more of an attacking role. He's often the one linking with the attacking trio to make it a quartet with Klopp seemingly eager to make the most of his power and his aggressive nature. 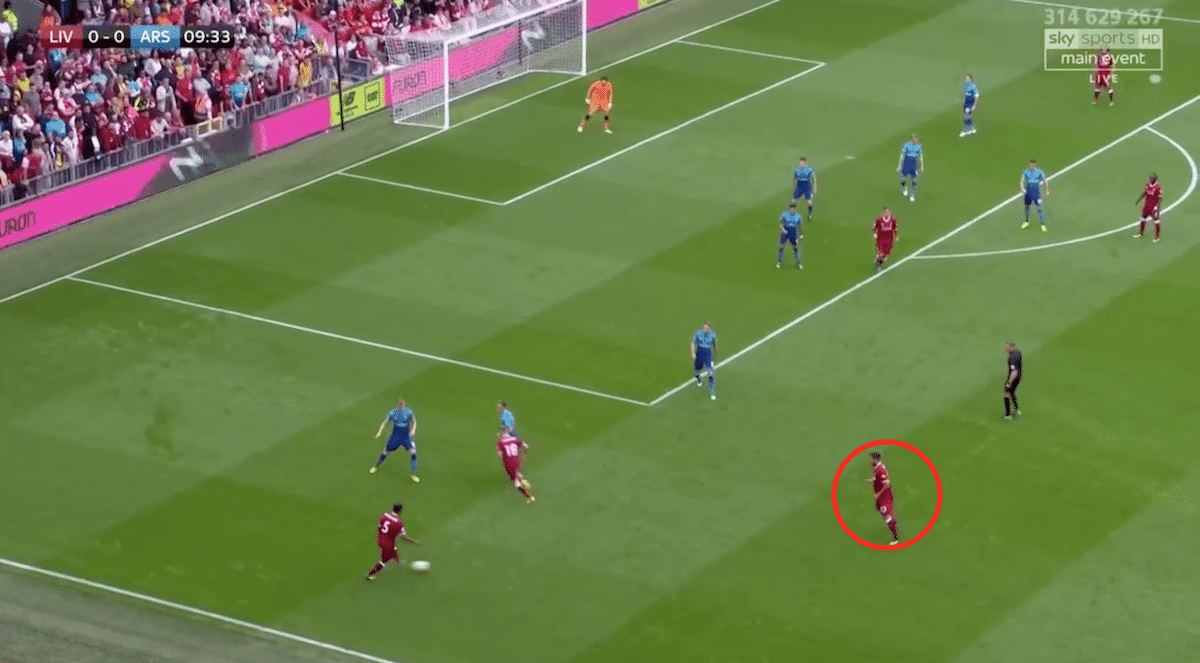 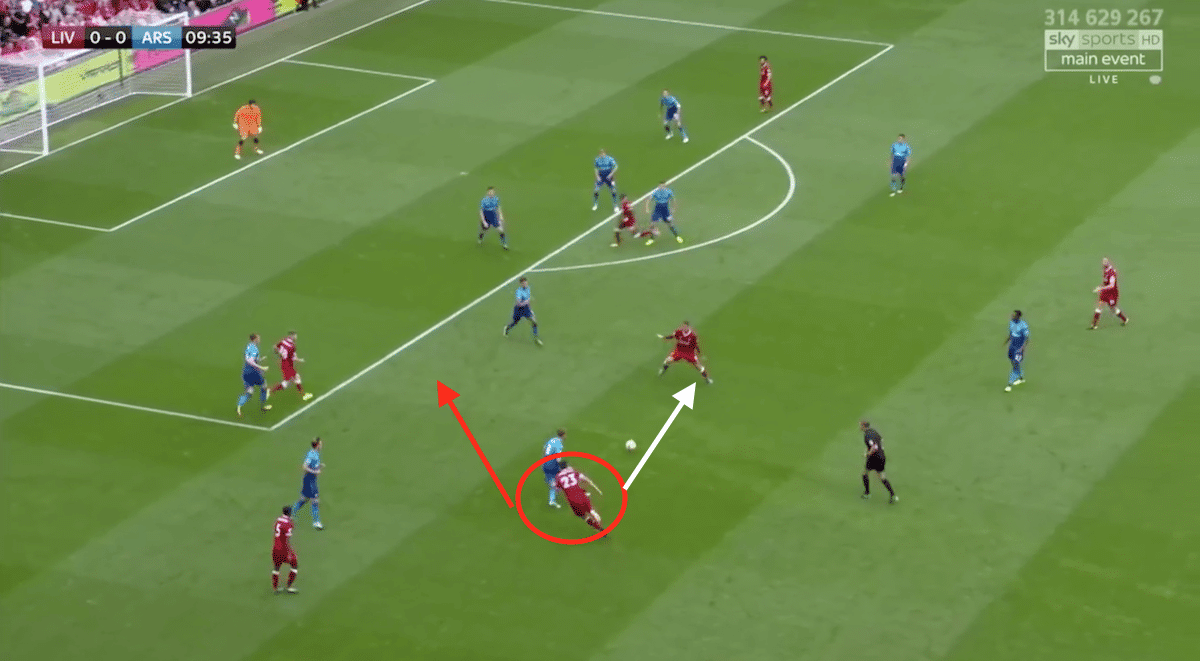 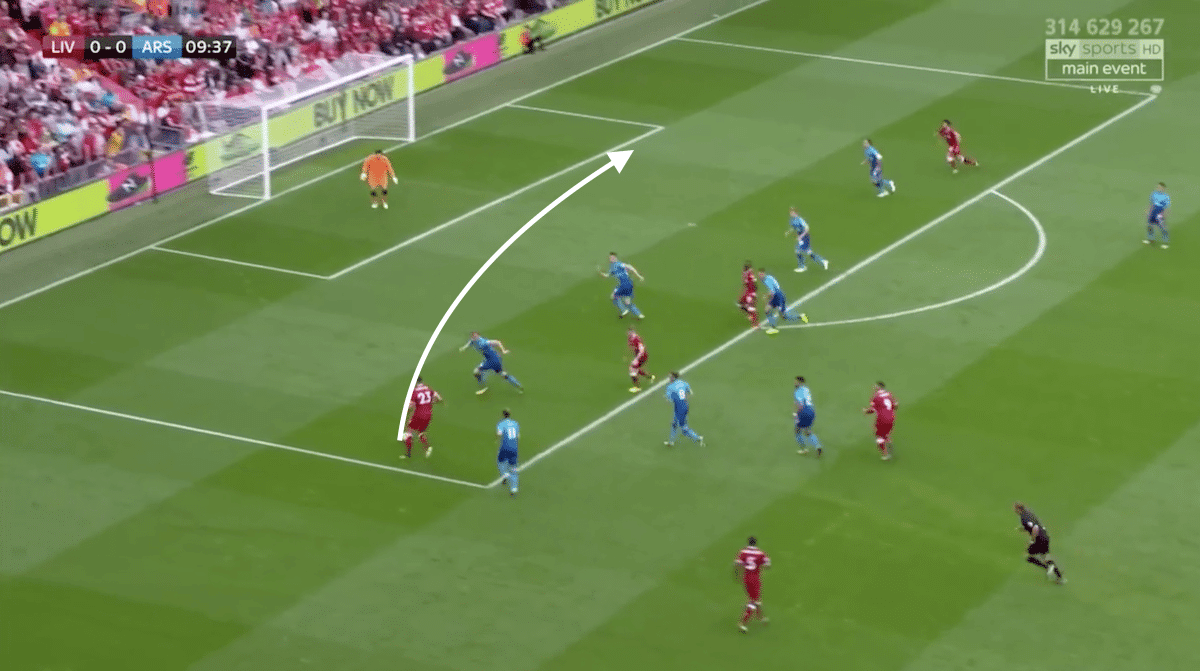 You get to see just that in the pictures above. He positions himself in space in the initial picture to receive the ball from Wijnaldum. He then goes from first to fifth gear in a matter of seconds. He plays the ball to Roberto Firmino and drives into the space as Liverpool make the most of the numbers on their left, coupled with Arsenal players being on their heels, to get into the area.

He could just stay where he is after playing the first pass with Firmino capable of producing moments of magic, but he doesn't. He's positive and despite Arsenal having nine players in the picture (10 if you include Petr Čech) Can is able to play the ball across the face of goal and straight to Salah who is thwarted by a sprawling Čech. 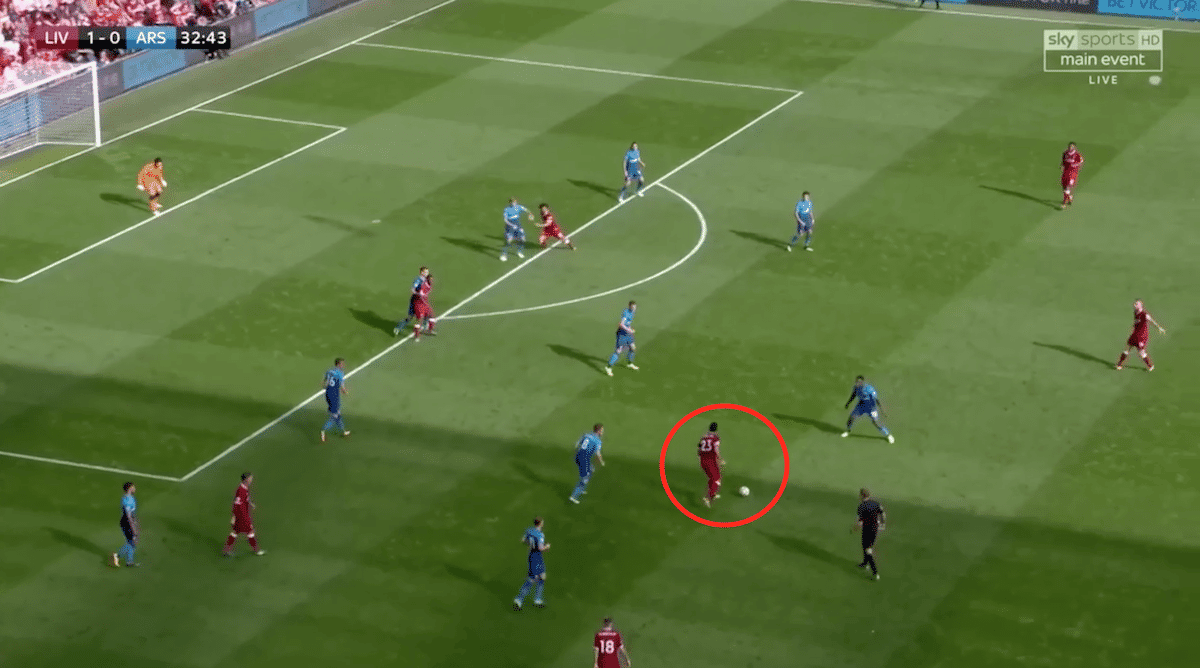 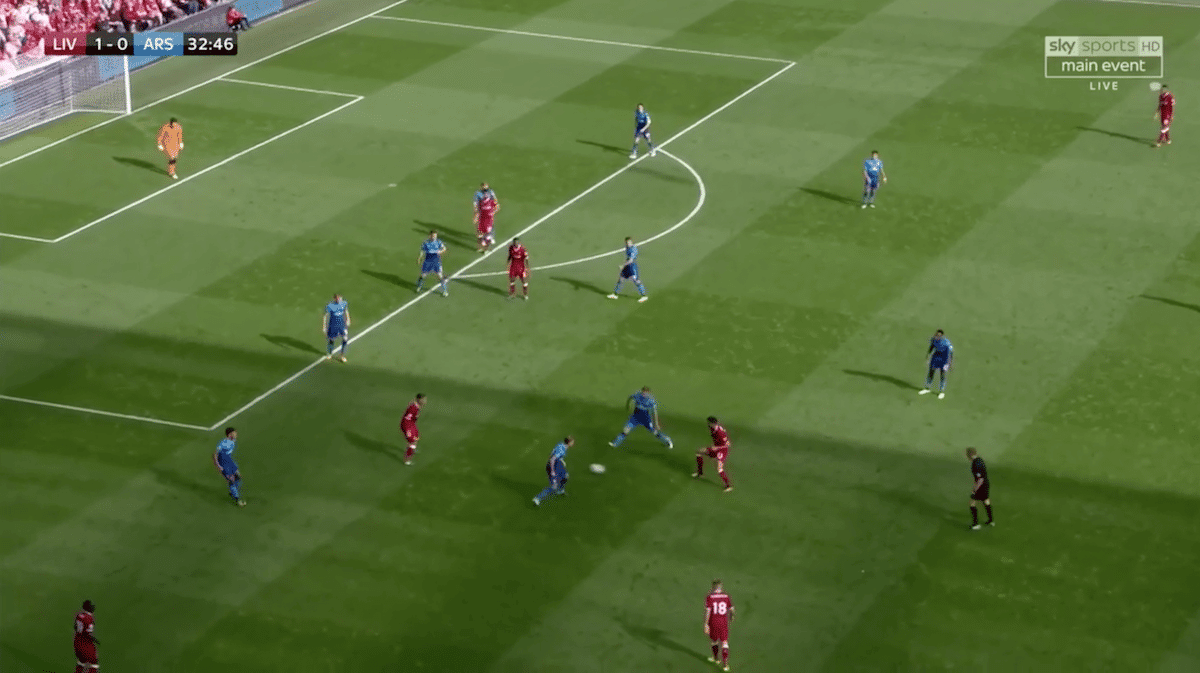 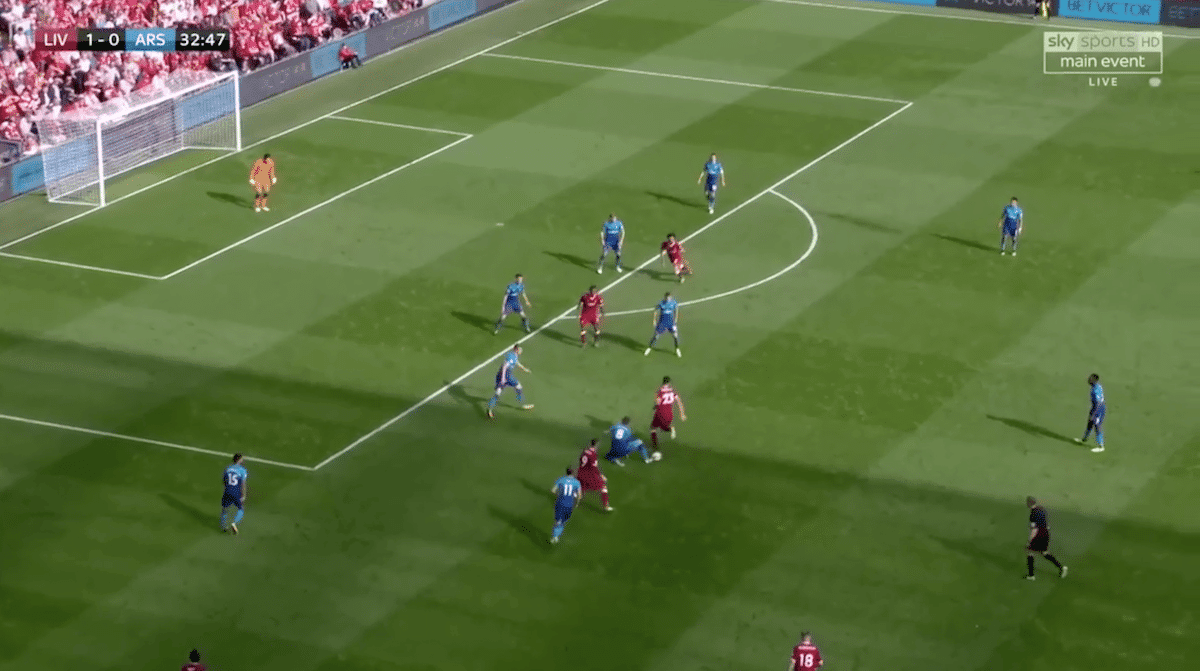 It's a similar story in the three pictures above. Arsenal have nine outfield players behind the ball with Danny Welbeck fronting Can up. The obvious pass would be backwards but with Arsenal standing off of him the German midfielder quickly pivots and is able to play a pass to Firmino who has dropped off into space.

Can continues his run forward and the Brazilian striker returns the ball to him. He flicks it back to Firmino and he looks for Joe Gomez on the overlap. The pass is cut out but Can's incisive play – the pass to the forward and the run for the return – means Arsenal go from looking fairly organised and in control of the space to scrambling to cut out a pass and lunging into tackles on the edge of their area in a blink of an eye. 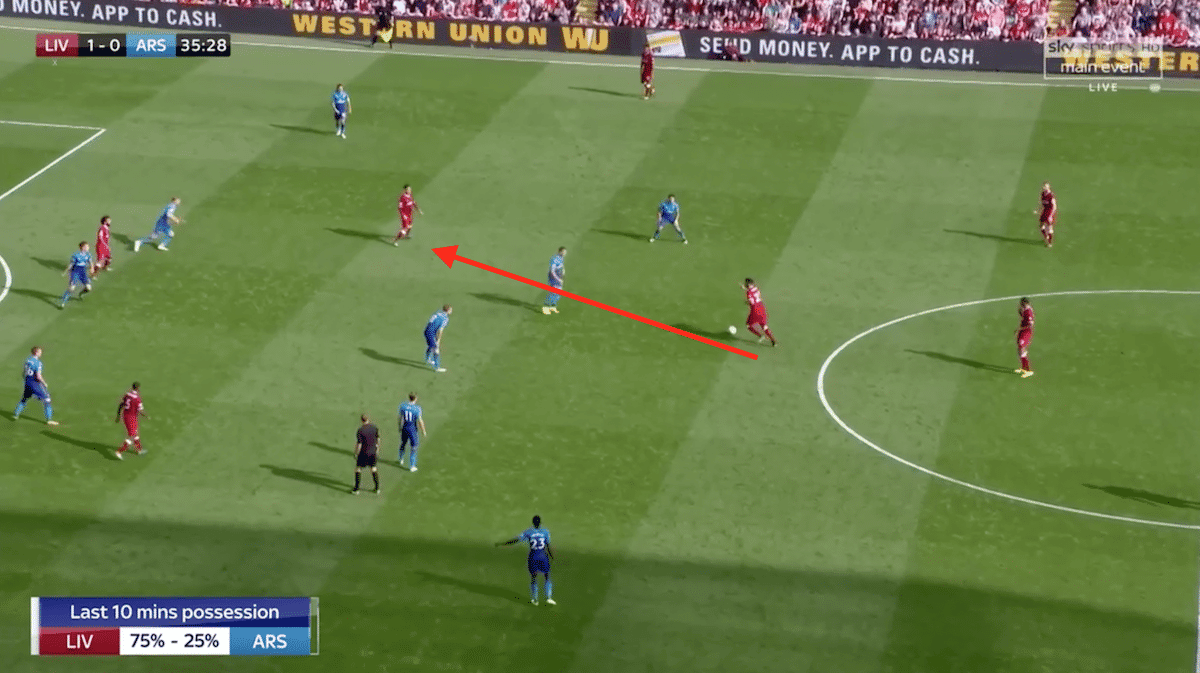 Arsenal just didn't their lesson. They kept giving Can space to face their goal. They kept allowing him the opportunity to break their midfield line with one pass or one positive run and credit to the former Bayer Leverkusen midfielder, he was relentless in doing just that.

He picks the ball up off of Joël Matip in the picture above and could just pass to Henderson who would work it wide to Gomez. Arsenal would shuffle over as a team and look to frustrate the Reds. But there's no need for Can to do that because there's no pressure on him.

He turns to face the opposition's goal and just threads a pass into Firmino who has yet again drifted into space without being followed. It was easy for Liverpool but that shouldn't take anything away from Can who kept on finding Firmino's feet.

He completed 44 of the 50 passes he attempted against Arsenal, with 29 of them coming in Arsenal's half and 17 of them coming in the final third. He finished the match with an 88 per cent pass success rate, the third best of those who started for Liverpool with only Dejan Lovren and Alberto Moreno having higher. 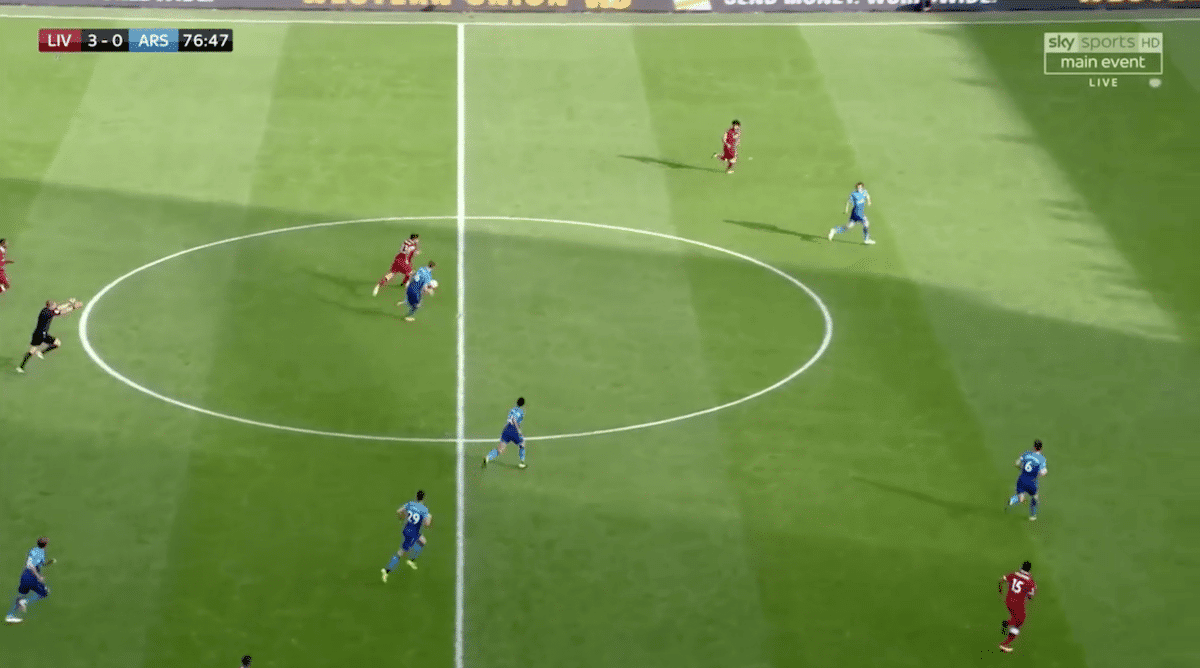 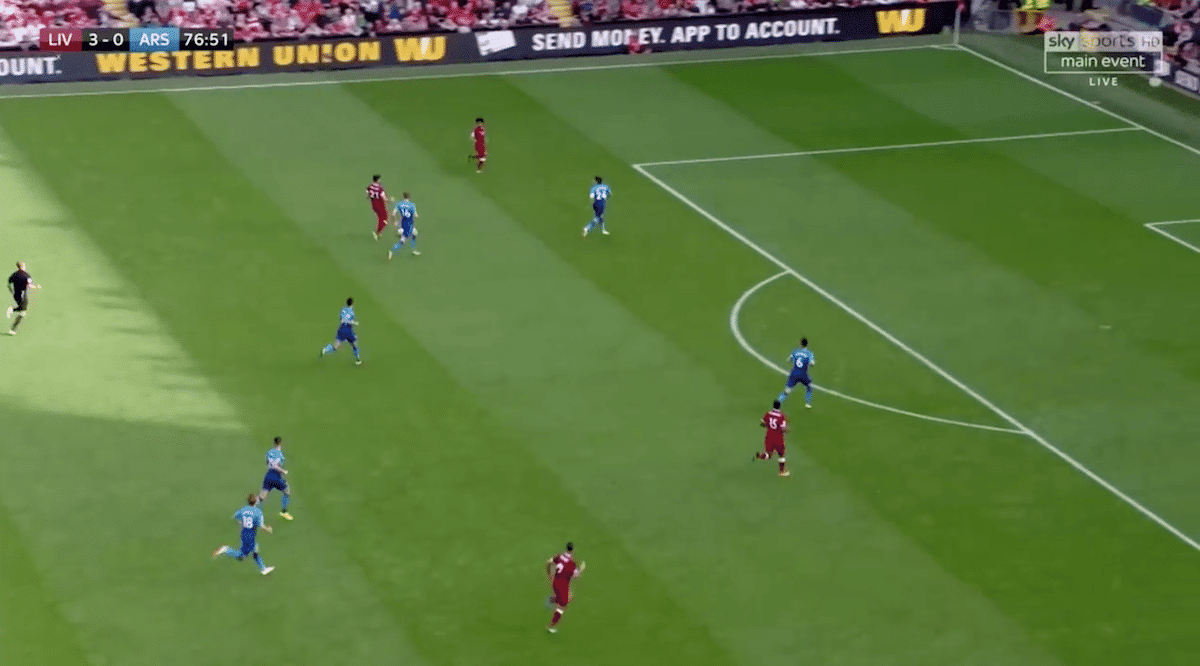 The two pictures above are taken during the build up to the Liverpool fourth. What Can does here is clever. He could play Salah in much earlier which would allow him to isolate the Arsenal defender before getting into the penalty area himself. However, that would mean the away side have players back in the penalty area to defend any potential cross.

Instead, Can drives forward himself, at speed, dragging players over to the Liverpool left hand side and leaving Daniel Sturridge one on one at the back post. Salah is then able to float the ball in and the Liverpool forward nods home.

He was at his marauding best against Arsenal and when in this kind of form he's almost unstoppable, with and without the ball. He completed all three dribbles against the Gunners as well as winning 100 per cent of his aerial duels and 67 per cent of the tackles he attempted.

He's quickly become one of the most in-form midfielders in the Premier League. If he's able to do it on a consistent basis he's going to be a dominant force this year at the heart of Klopp's team.