Emmanuel Adebayor is a complex and interesting character.

With 124 Premier League goals on his CV, as well as spells at Real Madrid, Manchester City, Arsenal and Tottenham Hotspur, he should, by rights, be highly sought-after – especially on a free – but there have always been question marks against his character and motivation.

Never more so than in the moment which defines a career which has taken him from France to England, Spain and Turkey. We're talking, of course, about that celebration after scoring for Manchester City against Arsenal at the Etihad Stadium in 2009, running the length of the field to laud it over his former supporters.

In April of this year, Adebayor gave an honest and insightful interview to the Daily Mail explaining his reasons behind what, at the time, was seen as little more than deliberate incitement of his former supporters.

“If a sniper shot me, he would not have struck me down,” Adebayor said. “I was in my spiritual zone. Kolo Touré said to me: ‘I was looking at the pictures and you did not flinch once.' I did not feel human anymore. The abuse was too much. I was ready to die. I just looked at them and thought ‘There are things you do not do'.”

On his time in England, Adebayor added: “I love England. But I got a name. There was a time when everything that touched Adebayor was negative. They said Adebayor liked money. Not only Adebayor moved clubs. To really understand me, we need to go home to Togo.”

Now, aged 35 and a free agent after leaving İstanbul Başakşehir at the end of the season, Adebayor could be on his way back. West Ham United, Watford and Sheffield United are all keen, according to, while Scottish champions Celtic are also credited with an interest.

Taken purely on the basis of his footballing ability, it's not hard to see why. In his prime, Adebayor was the ultimate modern-day Premier League footballer. Tall, yet quick as well as strong, he could hold the ball up, beat a man on the last shoulder and score all types of goals. Lots of them, too.

But his last flirtation with the Premier League saw an Adebayor who was an imitation of the player who dominated defences between 2006 and 2010, hitting 72 goals in four seasons.

Signed in January 2016 by Crystal Palace, the Togolese struck just once in the league for the Eagles – although he was afforded just seven starts – before being released at the end of the season. 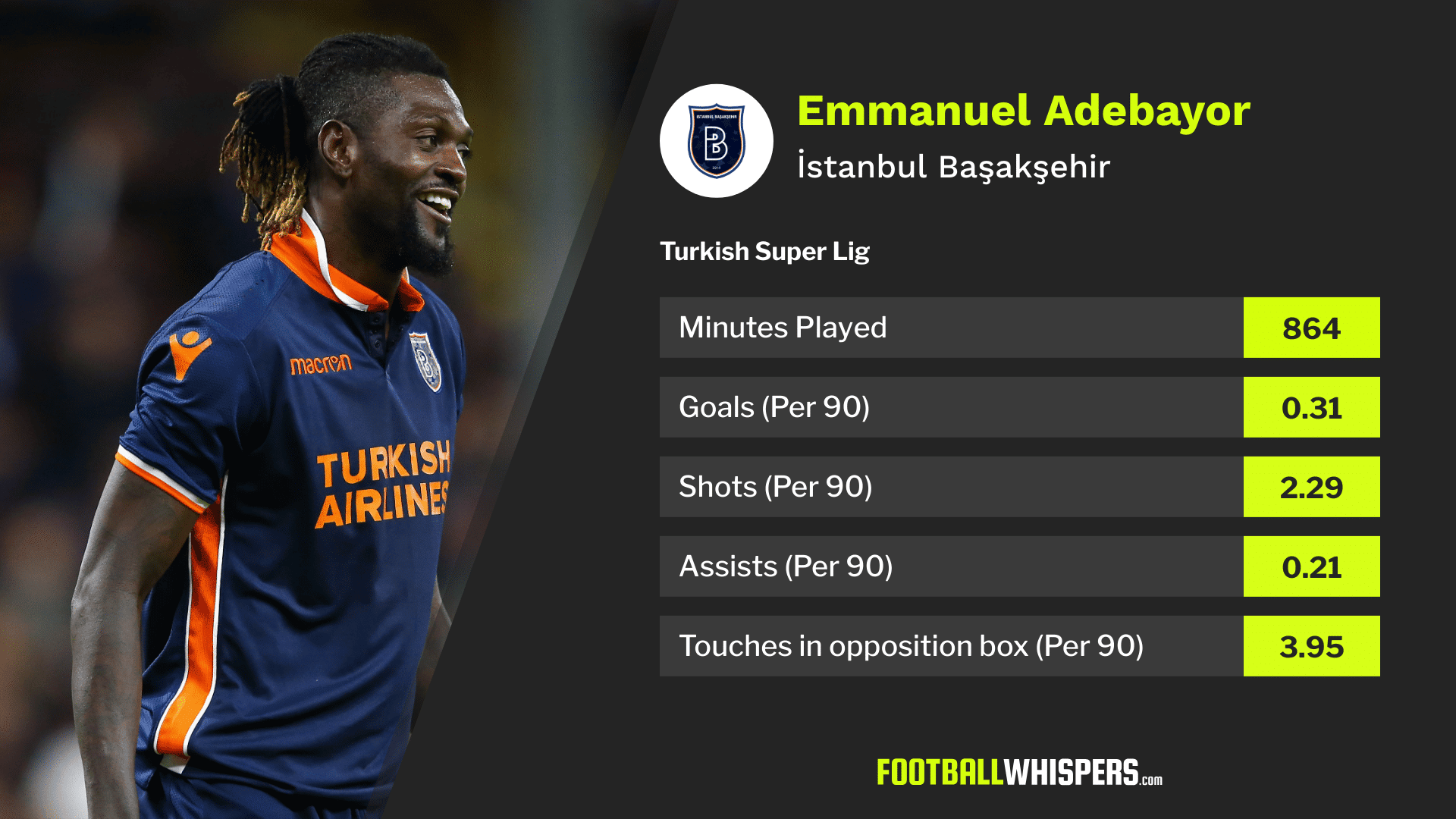 But Adebayor has enjoyed something of a renaissance at İstanbul Başakşehir in the last two-and-a-half seasons. He netted six in 11 after joining and followed that with 15 from just 29 starts in 2016/17 as the unfancied side finished third in 2017/18.

Reduced to a bit-part role last term as İstanbul Başakşehir came agonisingly close to an improbable title win, the veteran forward chipped in with three goals from eight starts – including what looked set to be a crucial equaliser at Kayserispor in the eighth minute of stoppage time in March to force a 1-1 draw.

Adebayor's statistical output for the 2018/19 season goes some way to explaining why he was used sparingly with former Newcastle United and Chelsea striker Demba Ba often preferred up front. He did not rank highly for any of the statistics by which a striker is measured.

For example, he was 31st among attackers in the Turkish Super Lig for shots per 90 with 2.29, only 0.52 of which were on target (50th overall). Adebayor ranked 36th for touches in the opposition box (3.95) and only succeeded with 2.08 aerial duels per 90, putting him 34th in spite of his frame. Perhaps most alarmingly, his shooting accuracy stood at a dismal 22.7 per cent.

It's hard to believe, then, any of the reported interest is based on anything other than reputation. West Ham, though serial collectors of strikers, still have Marko Arnautović and Javier Hernández even after letting Lucas Pérez leave this summer.

Similarly, Watford does not seem a likely destination for Adebayor, even though the Hornets were interested in the forward when he elected to sign for Palace in 2016.

In Troy Deeney, Andre Gray and Gerard Deulofeu, they have three senior forwards, while youngsters Adalberto Peñaranda and João Pedro, who will join from Fluminense in January, are already unlikely to feature regularly without the addition of another experienced forward.

Sheffield United, therefore, could represent Adebayor's best chance of a Premier League swansong. The Blades' striking options are sparse, and neither Billy Sharp nor David McGoldrick have a body of work behind them in the Premier League. However, such is the value of being in England's top flight, even the Blades could afford to go big on a younger option with a far higher ceiling.

All of which leaves Celtic. While the Bhoys are well-stocked at present with Leigh Griffiths, Odsonne Edouard and January addition Vakoun Issouf Bayo in situ, they could soon find themselves short if reported interest in Edouard from Lazio comes to fruition.

Adebayor would not be expected to play every week and his experience would count for something. It's a move which might also help the striker achieve a personal goal having never lifted a league title.

“My last challenge is to win a league title for the first time,” he told the Daily Mail in March. With Celtic closing in on ten-in-a-row, they might be the perfect match.