Emile Heskey has become one of football’s multi-purpose punchlines; a byword for non-scoring or technically inept strikers. In certain contexts just mentioning his name is enough to raise an easy laugh. It’s almost as if he didn’t enjoy 16 uninterrupted years in the Premier League on his own merits.

The jokes are cheap, plentiful and usually misguided. Heskey was far from the best or most obviously gifted footballer to play the game but he deserves better. There’s a reason why he found favour under a succession of managers who were prepared to overlook his occasionally wayward finishing in light of his wider contribution to the team.

Although Heskey didn't quite become the player he should have been, and undoubtedly struggled for goals at times, he was much better than the tiresome social media jibes would suggest. He's become a significant figure in English football culture but for the wrong reasons.

Part of the problem is a tendency to reduce everything to the lowest common denominator. Heskey was a major component of the England team during the ‘Golden Generation’ years. Expectations were understandably high and he was never as glamorous as some of the other names on show; Michael Owen, Wayne Rooney, Frank Lampard, Steven Gerrard and Rio Ferdinand, for example.

His reputation suffered in comparison to truly top-level players. Being the hardworking foil for more prolific strikers wasn’t enough to earn respect. His own record was under constant scrutiny. Heskey was perceived as the clogger, the donkey, the carthorse. The forlorn banjo-wielding figure never in danger of hitting his target. Barn doors and other proverbial goals remained profoundly untroubled in his presence.

Despite emerging as a fully-formed powerhouse striker at the age of 17, Heskey never fulfilled his undoubted promise. Early on he was direct, bullish and brutal, shrugging off defenders with contemptuous ease. Yet the more refined his game became, a little of that initial edge seemed to be lost.

His efforts were increasingly trained on setting up team-mates rather than scoring himself. Heskey did the hard yards for them, freeing up space and sacrificing himself in the process. It was selflessness personified. He played more with his back to goal, holding up balls fired speculatively in his direction and battling for headers. He also became one of the finest purveyors of the chest pass.

It was simple but effective stuff. At Liverpool, Robbie Fowler was eased out of the picture as Owen made a habit of profiting from Heskey’s flick-ons. In later years, Rooney was able to do the same during Heskey’s surprise England renaissance under Fabio Capello.

Unfortunately, this was the extent of most casual observers’ acquaintance with what he was capable of – the showpiece games for England and Liverpool where Heskey took on the role of tireless flunkey for his more high-profile colleagues. His weekly exertions for often middling teams went unnoticed and unappreciated by a wider audience.

It’s a problem with modern football in general, its highlights culture and restless search for an easily-digestible narrative that sees complex issues become flattened and simplified, condensed into something much less nuanced than the reality. Opinions are broad, uncomplicated brushstrokes and become the accepted truth through nothing more than mind-numbing repetition.

In this world, Heskey is a laughing stock, a cartoonish buffoon of a footballer – all heavy touches, wild booming shots and looks of pained anguish. In general, when you search for the name of a well-known player on YouTube, no matter how ostensibly unfashionable, there will normally be a selection of fawning tributes and goal compilations.

Not so with Heskey. The most popular results are predominately jokes at his expense from lad banter accounts or people who don’t really understand football. Many revel in his worst misses or refer to his FIFA rating as if that really matters.

Some ironically liken him to Lionel Messi or Cristiano Ronaldo. Almost anybody would suffer by comparison but for some reason Heskey tends to be the one chosen. There are far worse players out there but perhaps his shortcomings were simply too visible for too long.

He’s a victim of his own success in this regard. Others who fared worse simply faded from view before this perception could take root whereas Heskey remained defiantly at the top. It’s a shame to see him rendered as little more than a punching bag for poor comedy after his wholehearted efforts. He grafted and gave his all, together with a sprinkling of quality on occasions.

Even for a supposedly wasteful and ineffective striker, he scored 164 competitive goals in senior football, most at the very highest level, but seemingly not enough in an England shirt to make anyone care or take him seriously. There were some impressive finishes in amongst that total too, particularly at Liverpool.

Most relied on power rather than finesse, lashing the ball into the top corner from distance against Leeds United and Derby County in his first season, but there was also a delicate lob as part of a brace at home to Coventry City. Many were greeted with his spinning the decks celebration. It was a more carefree time for Heskey, with his reputation still rising.

Arguably his best came in a 3-2 victory over Bayern Munich to win the European Super Cup. He destroyed two defenders for pace before clipping the ball over an onrushing Oliver Kahn. 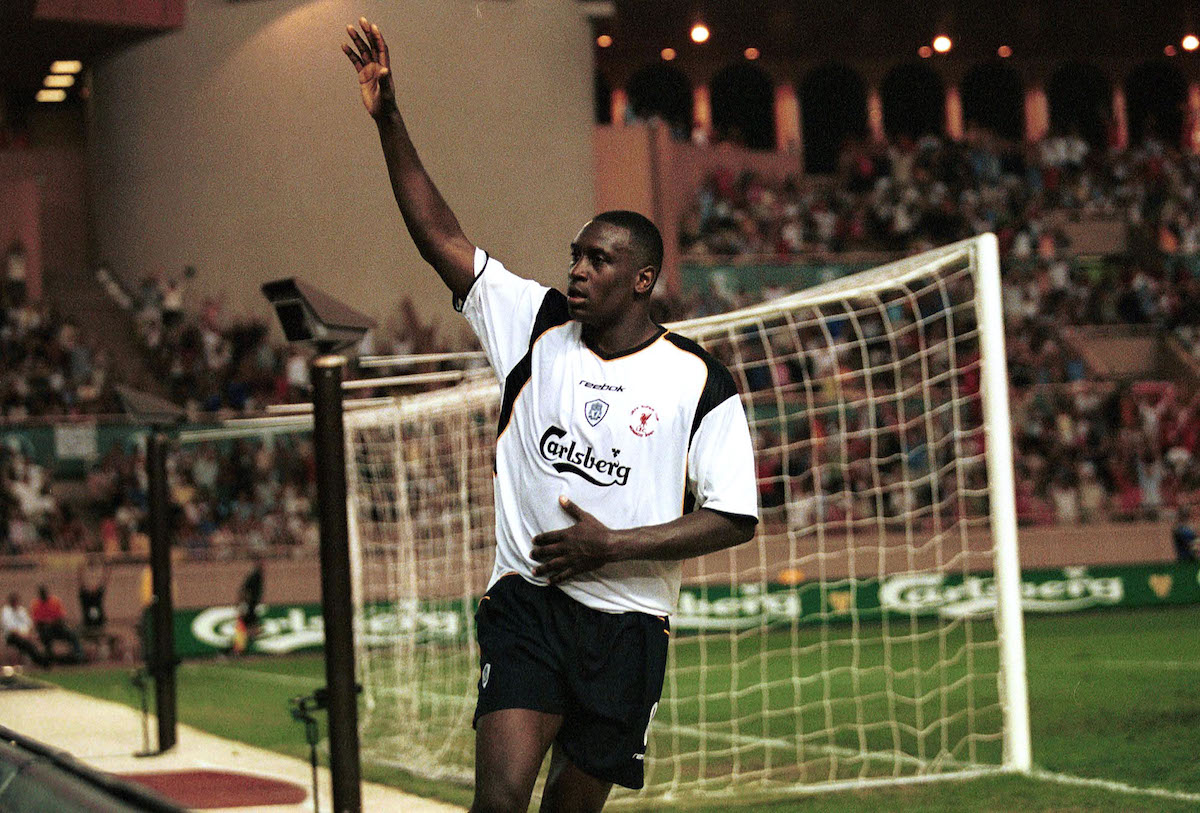 It represented perhaps the height of his club career, coming just after an impressive treble-winning debut season and before his performances plateaued.

When Heskey joined Birmingham City he dropped down the ranks and stopped competing for honours. From then on he was often fighting tirelessly against the rising tide to avoid relegation and remain competitive.

It was a challenge he embraced but one that tainted perceptions of him as a player. Chances became increasingly scarce and the ones he squandered were less easily forgotten. His confidence suffered and a vicious circle was established.

This period helped to cement Heskey’s current, much-maligned reputation, however unfair it might be.