Emil Forsberg might finally be about to get his long-awaited move to the Premier League. According to reports, Manchester United and Tottenham Hotspur are keen to add the RB Leipzig man to their ranks and a fee of £16million could be enough to secure his services.

The Swedish playmaker has been on the radar of the top six clubs in England for the best part of five years.

During the 2016/17 campaign, his debut season in the Bundesliga, Forsberg announced himself to a wider audience by assisting 19 times and chipping in with eight goals as Die Roten Bullen surprised the masses with a second-place finish.

He was linked with Liverpool as a potential replacement for Adam Lallana, Arsenal wanted to add him to their attack and there was even talk that Manchester City had an interest.

However, his output dwindled and he never hit the heights of 2016/17 again. But this season, under new manager Julian Nagelsmann, he's having his most-productive campaign since. In the German top-flight this term, Forsberg has averaged a goal or an assist every 113 minutes.

But all isn't well at the Red Bull Arena. Forsberg isn't a key part of the squad and Nagelsmann signed Dani Olmo to the squad during the winter window.

The 28-year-old has previously made it clear that he wants to leave Leipzig, telling Bild: ‘Things aren't going well. I don't have to prove myself anymore. I have a contract, but everyone knows that I dream of playing in another league.”

After the loss of Christian Eriksen to Internazionale, Tottenham need to add a playmaker to their ranks.

Spurs head coach José Mourinho fanned the flames by namechecking the Sweden international after Tottenham's Champions League last-16 defeat to RB Leipzig: “Check out their team and ours. I want Yussuf Poulsen, I want Emil Forsberg. But they sit on their bench.”

“It’s nothing that surprises me at all. Mourinho is a great legend who has worked with Victor Lindelöf as well. Together with Victor, Forsberg is the biggest star in the national team and has caused total chaos in Leipzig. 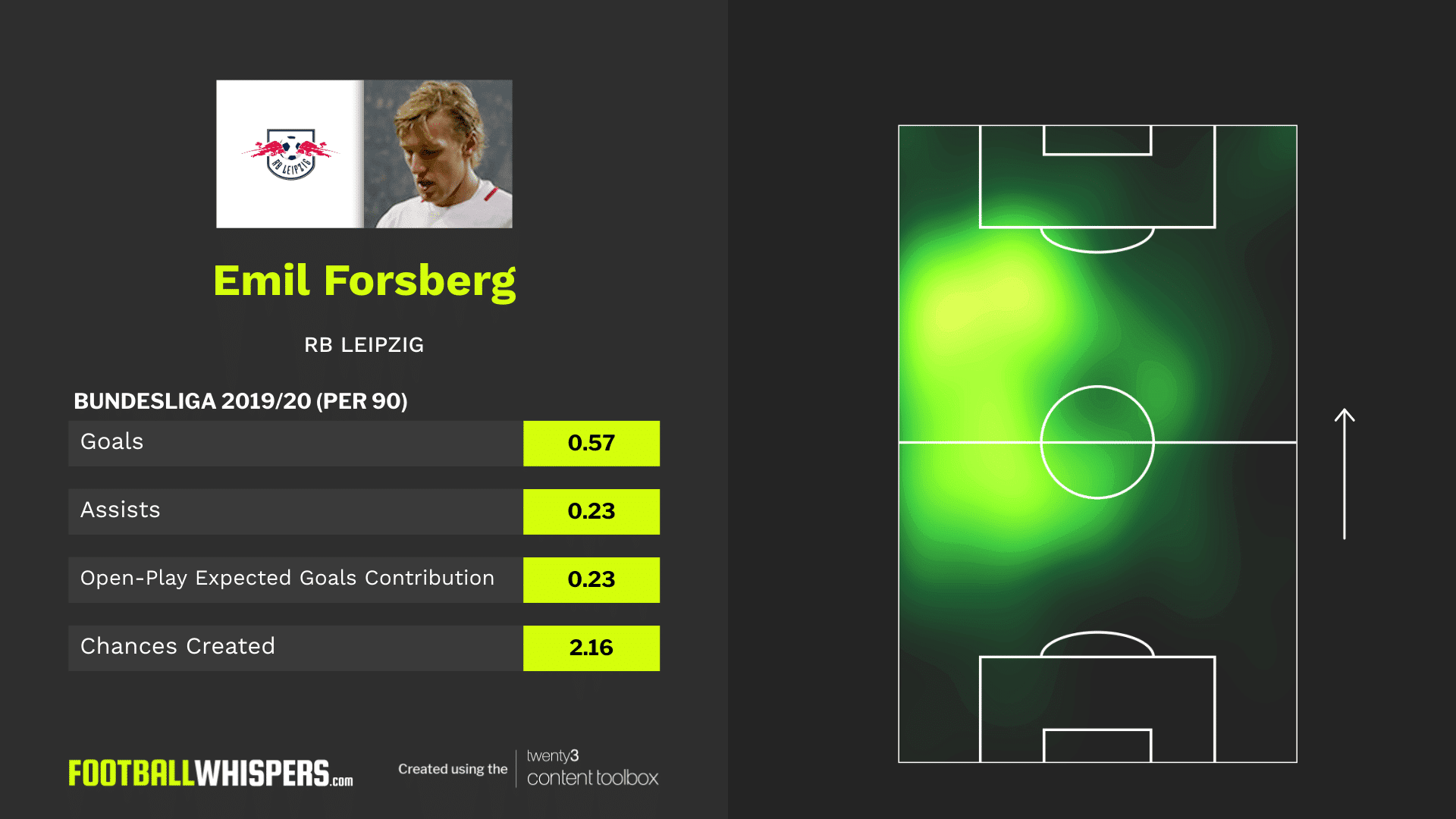 “I’m not surprised. I can say this; everyone will soon see what will happen to Emil Forsberg.”

Manchester United's need for Forsberg died a little with the signing of Bruno Fernandes. But the Red Devils can't become overly reliant on one player. Bagging a player of his ability and versatility would give Ole Gunnar Solskjær a number of options, and for a bargain price.

But why are two teams challenging for a Champions League place battling for a player who can't get into RB Leipzig's starting XI?

Forsberg's stats this season are both positive and negative depending on how you view them. He's grossly outperforming his underlying stats by averaging 0.8 goals and assists per 90 (0.41 in open-play) from an open-play expected goals contribution average of 0.23. But elite players often overperform in these areas.

Furthermore, Forsberg's open-play expected goals contribution average since the start of the 2017/18 campaign is 0.31 per 90. For context, Eriksen's average during his final six months with Spurs was 0.21 in this metric.

So, the RB Leipzig playmaker is fairly consistent in terms of open-play contribution. He's a creative hub, assisting 2.16 shots per 90, and one of the best ball carriers in the Bundesliga.

Forsberg might not attempt many dribbles, around 2.4 on average, but over the past three seasons, he's completed 81 per cent. He can split defensive lines with a pass and break them with a slaloming run.

He is one of those players who you shouldn't build your attack around but if his style fits the way you play, he's an ideal add-on. He's like a magician's assistant in the sense he's not the star but he adds to the act.

Forsberg is also a grafter, a welcome trait in the modern game, he averages more than three possession regains in the middle third (per 90) and more than one in the defensive third over the past three seasons. Having been part of one of the best pressing teams in Europe, Forsberg knows all about pressing triggers.

The 28-year-old ticks plenty of boxes without excelling. His stock may have fallen but this makes him a superb value for money signing with the potential to impress.