Arsenal have found Arsène Wenger's successor – and it's not who most expected. Yes, Unai Emery is the man tasked with leading the club through the post-Wenger world.

Although several reports claimed Mikel Arteta was close to being appointed, it is understood Emery's experience and attention to detail drew Arsenal chief executive Ivan Gazidis, who headed up the recruitment process, towards the Spaniard.

Some reports claimed Arteta withdrew from the running due to concerns about the club’s new structure while the Gunners' failure to give certain assurances about control over transfers also contributed. Former Barcelona coach Luis Enrique apparently ruled himself out for the same reason.

Emery, though, seems to be the last man standing and will lead Arsenal through the club's new chapter.

The challenge facing the Spaniard is a considerable one, so we're going to take a look at Emery's tactical philosophy.

Arsenal fans too quick to judge

If Twitter is the most accurate barometer by which to gauge the response to a major football story, it's fair to say the Arsenal fanbase are unmoved by Emery's appointment.

But the harsh reality is the 46-year-old has won more European trophies in the last four seasons than Arsenal have in 132 years.

While Arsenal fans may have viewed Arteta as the ‘bold choice' promised by Gazidis, it’s difficult to dispute Arsenal’s final decision. Arteta may be highly-regarded by Pep Guardiola but, crucially, has never managed at any level.

Emery, in stark contrast, has coached six clubs in three different countries and boasts eight major honours on his CV.

After a modest playing career, Emery bagged his first coaching job at Lorca Deportiva in 2005 before making a name for himself at Almería, guiding the club to promotion into La Liga.

In 2008, his work in Murcia landed him one of the most lucrative jobs in Spanish football: managing Valencia.

Emery's time at Valencia was impressive, finishing third in La Liga in three of his four seasons. The club were cash-strapped during Emery's reign but he handled a less-than-ideal situation shrewdly enough to cement Valencia's place just below the Real Madrid-Barcelona duopoly.

Emery left Valencia in 2012 and decided his next challenge was in Russia, at Spartak Moscow. However, it turned out to be a rather harrowing experience. Six months after being appointed, Emery found himself out of a job.

Then, in January 2013, a turning point. He was tasked with transforming Sevilla's fortunes but doing so once again against a backdrop of financial turmoil. Emery focused on tactics and the training ground, though, meticulously building a team that went on to capture a hat-trick of Europa League crowns.

That sustained success in Europe was a product of Emery's tactical nous and flexibility. His 4-2-3-1 system didn't always produce the most beautiful football, but it worked. A feature of Sevilla's play under Emery was midfield control, with Vitolo.

Emery built and developed that midfield and it's no surprise each of those players earned lucrative moves elsewhere; Krychowiak followed Emery to France, Iborra joined Leicester City, Banega moved to Inter, Vidal signed for Barcelona and Vitolo left for Atlético Madrid.

Emery can also count Ivan Rakitić, Álvaro Negredo, Jesús Navas, David Silva and Juan Mata among those who have developed under his tutelage.

The Parc des Princes was a more testing environment, for sure. The club's Qatari owners had hand-picked Emery as the man to make PSG a European force and deliver their most coveted prize: the Champions League.

It was never going to be that easy, even with the talent at his disposal. Whereas Emery had undoubtedly been the leader at Sevilla, he was forced to contend with a pervading atmosphere of play-power in Paris, first through Zlatan Ibrahimović and later with Neymar.

And although Emery won the Coupe de France and Coupe de La Ligue in his first season, it was viewed as a disappointment having surrendered the Ligue 1 crown to Leonardo Jardim's free-scoring Monaco.

The spectacular collapse to Barcelona in the Champions League, losing 6-1 at the Camp Nou having led 4-0 from the first-leg, only heightened suspicion that Emery was ill-suited to the rigours of the PSG job.

But the fact remains that he left Paris with five trophies to show for two seasons in the capital. PSG have some of the best talent in the world but making them an all-encompassing European force is not as easy as it maybe should be, as Laurent Blanc and Carlo Ancelotti discovered before Emery, and Thomas Tuchel will no doubt discover now.

It was difficult to fully escape the idea that Emery was forced to surrender a certain degree of the control at PSG to the players and the powers-that-be. Telling Neymar and Edinson Cavani to ‘sort it out themselves' in the wake of their highly-publicised on-pitch penalty spat did not reflect well, but it was a telling symbol of the power a player like Neymar holds at PSG.

Despite that, the Basque tactician guided PSG back to Le Championnat, regaining the title in ruthless fashion with a 7-1 win over Monaco. Emery's side fell just four points short of setting a new Ligue 1 record of 97.

And it’s important to note, too, that Emery’s dedication to youth helped develop Presnel Kimpembe, Giovani Lo Celso and Adrien Rabiot (although the latter's form tailed off drastically in the final weeks of the season).

Importantly, though, Emery made the 4-3-3 work. It just so happens that Wenger predominantly favoured the same system at the Emirates Stadium. Emery likes to have a dedicated midfield anchor and two more attack-minded players on either side. At PSG, that saw Thiago Motta in the middle and two of either Marco Verratti, Rabiot and Javier Pastore ahead of the Italian. This season, Lo Celso and Julian Draxler and Lassana Diarra have also been used.

As you can see below, during the 7-1 Champions League win over Celtic, Rabiot is the deepest midfielder with Verratti and Draxler pushing further ahead. PSG's compactness in midfield leaves plenty of space for the full-backs. 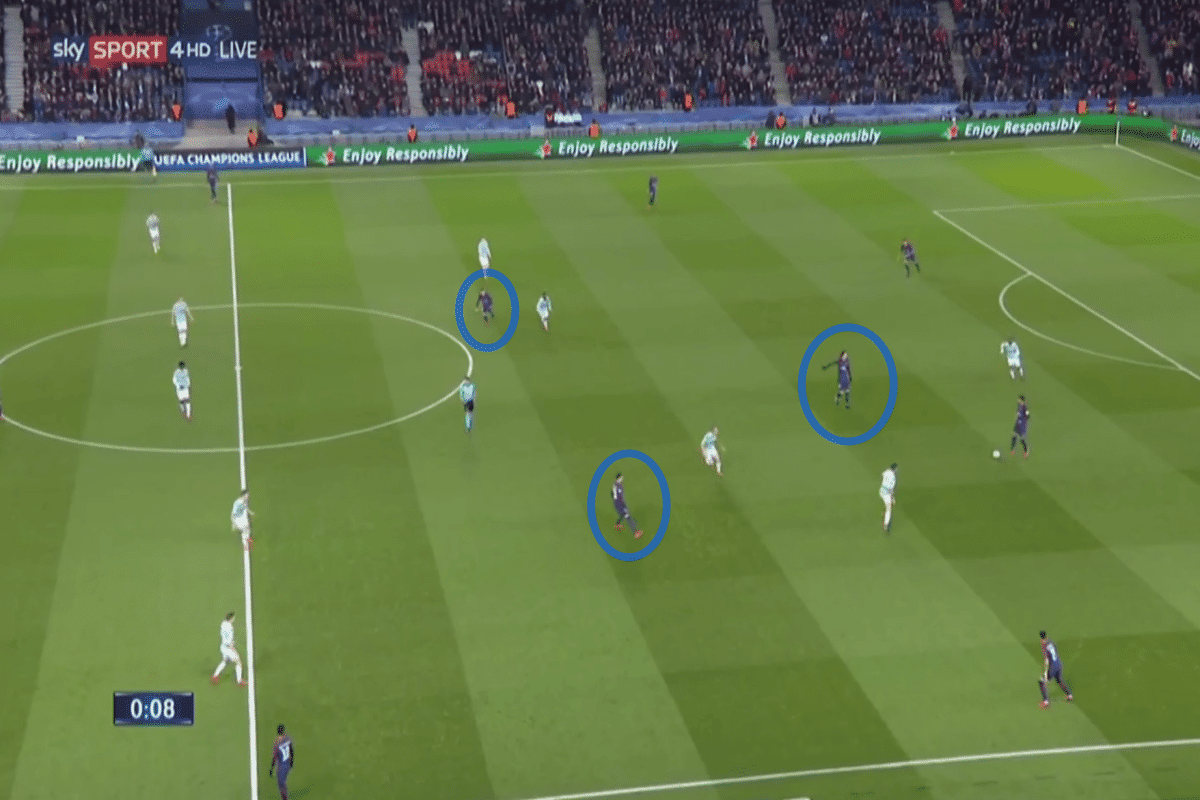 At Arsenal, the personnel is different but could fit a similar system; a midfield trio of Granit Xhaka, Aaron Ramsey and Henrikh Mkhitaryan. The Armenian could also occupy one of the wide positions up front, with Mesut Özil perhaps dropping back into the midfield three.

Under Blanc, Emery's predecessor, PSG were prone to more patient build-up, which suited Zlatan Ibrahimović in attack. Under Emery, though, PSG became a quicker attacking side, aided by the speed of Neymar and Kylian Mbappé, but with Motta and Verratti dictating the tempo in midfield.

Full-backs are often encouraged to push forward in Emery's system. It has worked for Dani Alves and Yuri Berchiche and it could similarly benefit an attack-minded full-back like Héctor Bellerín.

Arsenal fans will also be encouraged to hear that Emery's teams are generally more compact and hard to break down. Indeed, PSG have conceded just 56 goals in the 76 Ligue 1 games under Emery.

While Sevilla usually shaped up in a 4-2-3-1, there were clear parallels to the 4-3-3 at PSG, namely swift transitions, speedy counter-attacking and astute patterns of play designed to create space.

For example, the front trio of Neymar, Cavani and Mbappé would often be compact, narrowing the opposition and creating space for the full-backs. In contrast, without the ball, Emery's sides traditionally press in a way which forces the opponent wide (see screenshot below). When Emery's team wins the ball back, the trio up front have space through the middle. 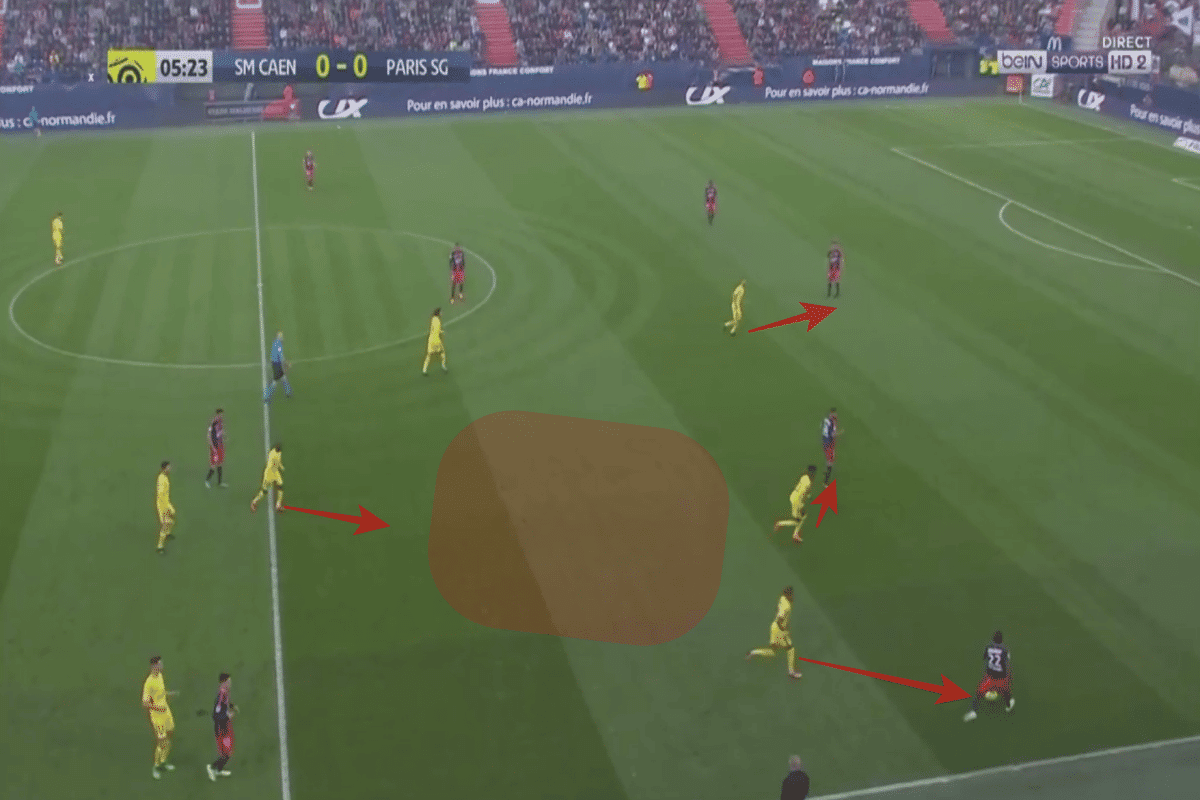 This can certainly be achieved at Arsenal and Emery's tactical nous could bring the best out of Pierre-Emerick Aubameyang, a forward who relishes driving into space behind defenders and who thrived in such a system at Borussia Dortmund.

Emery may not have been able to deliver European glory for PSG, but his track record as a manager remains impressive. Whereas Arteta and Enrique had reservations about operating in the newly-established structure at the Emirates – namely head of football relations Raul Sanllehi and head of recruitment Sven Mislintat – Emery has won trophies working in a similar environment.

Emery's training and match preparations will be a culture shock. He is said to spend up to 12 hours at a time putting together video analyses for his players, which will be a radical departure from Wenger's style

His grasp on English is limited but that is not expected to be a major stumbling block. Emery is an intelligent coach who conducts himself impeccably and thinks and speaks cogently about football.

It may take some time for the players to adapt to this major change, but Emery's tactical knowledge and commitment to giving youth a chance could help him win the fans over in North London.