Elseid Hysaj was the one that got away, the one that could have been. An agreement between Maurizio Sarri and Napoli meant that, when the manager left for Chelsea, it was only Jorginho that he could bring with him.

That hasn’t stopped the Blues pursuing the Albanian right-back since then, though.

Neapolitan journalist Emanuele Cammaroto went further: “Hysaj is on the way out,” he has said.

“Ancelotti is ready to let him leave, and Aurelio de Laurentiis didn’t appreciate the take it or leave it offer on the contract, as the renewal terms were too high.

“The goodbye is already on the agenda, the Albanian will go to his mentor Sarri.”

Hysaj has suffered from being rotated under new Napoli boss Carlo Ancelotti, but otherwise, his role hasn’t much changed.

While Napoli as a whole have become slightly less possession-oriented under Ancelotti, this hasn’t extended to Hysaj.

The number of accurate passes he averages per game has dropped by fewer than one, from 57.54 to 56.7 per 90 minutes. The passing accuracy hasn’t shifted either, 87 per cent in both periods.

It’s a relatively different role to the one César Azpilicueta has been playing for the Blues this season, as shown by their Football Whispers persona radar.

Headlines about Hysaj’s potential arrival at Stamford Bridge have generally positioned him as a Davide Zappacosta replacement or upgrade.

That would be odd. Why would a player leave Napoli to become a rotational option (or worse) even if it was to meet up with his mentor manager again?

Chelsea fans, who understandably hold Azpilicueta dear in their hearts, might not want to think about the Spaniard being dropped, but it would make sense.

Hysaj not only knows Sarri’s system, but he’s better suited to it than the 29-year-old. It’s a rare event to see Azpilicueta running with the ball down the flank, but Hysaj does so on a regular basis.

His drives into space are a big help for Napoli to get the ball up-field. With Sarri favouring narrow attackers, his ideal full-back would be one who can cover the whole flank, up and down the field.

“I prefer to defend as far as possible up the pitch,” Azpilicueta said earlier in the season in explaining Sarri’s system of defending. That doesn’t quite seem to be borne out in his actions, though.

Even though Azpilicueta has stopped playing as a centre-back, his touches are still broadly at the same heights of the pitch (although a different width) as they were last season. 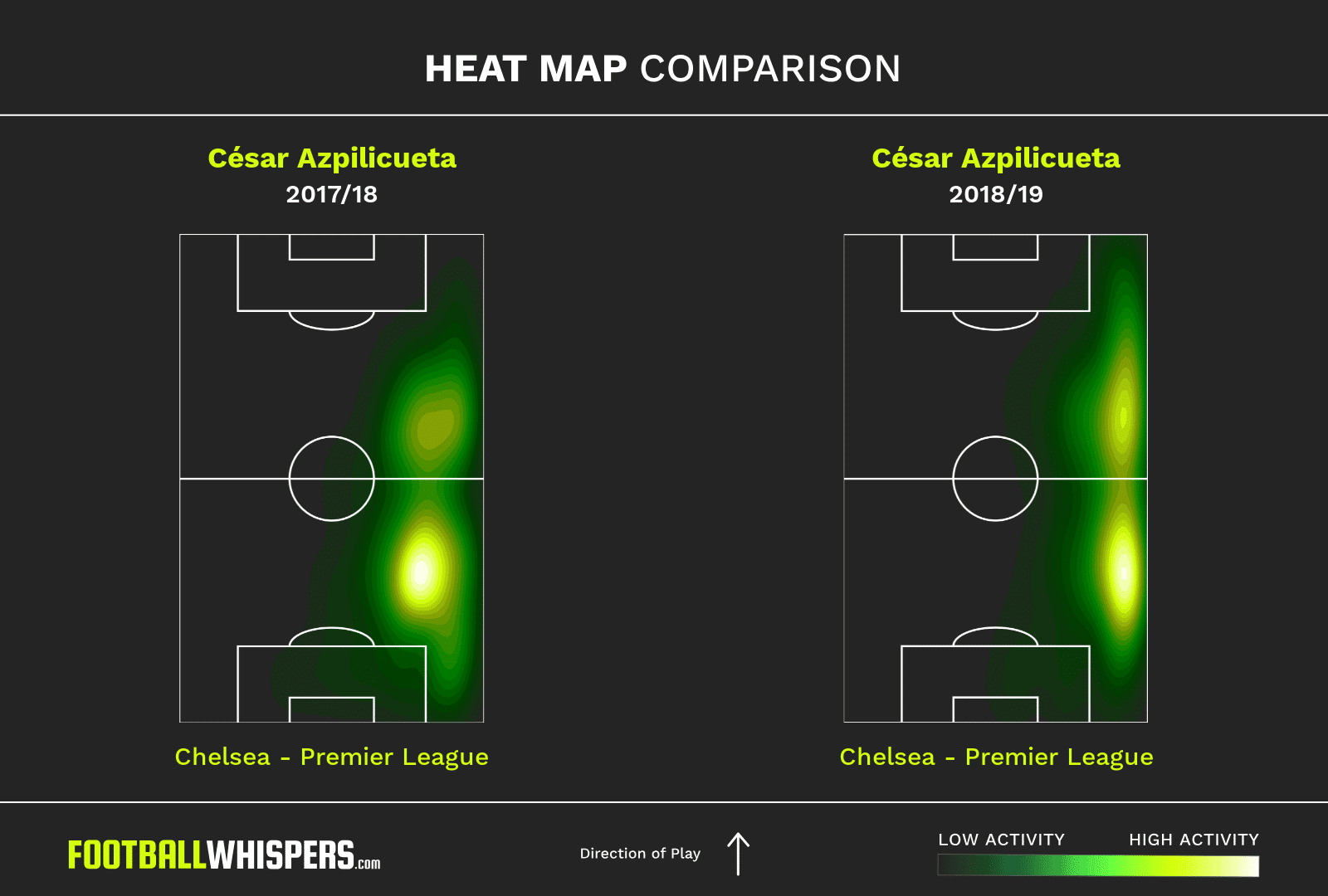 Maybe Azpilicueta likes, and is, defending high up the pitch, but his overall contributions are further back. There is a bit more of a concentration in high areas, but it’s nowhere near the same as Hysaj over the past two seasons.

His actions are more concentrated in the opposition half (note, he’s spent more time at left-back this season, which is why his 2018/19 map looks a little odd). 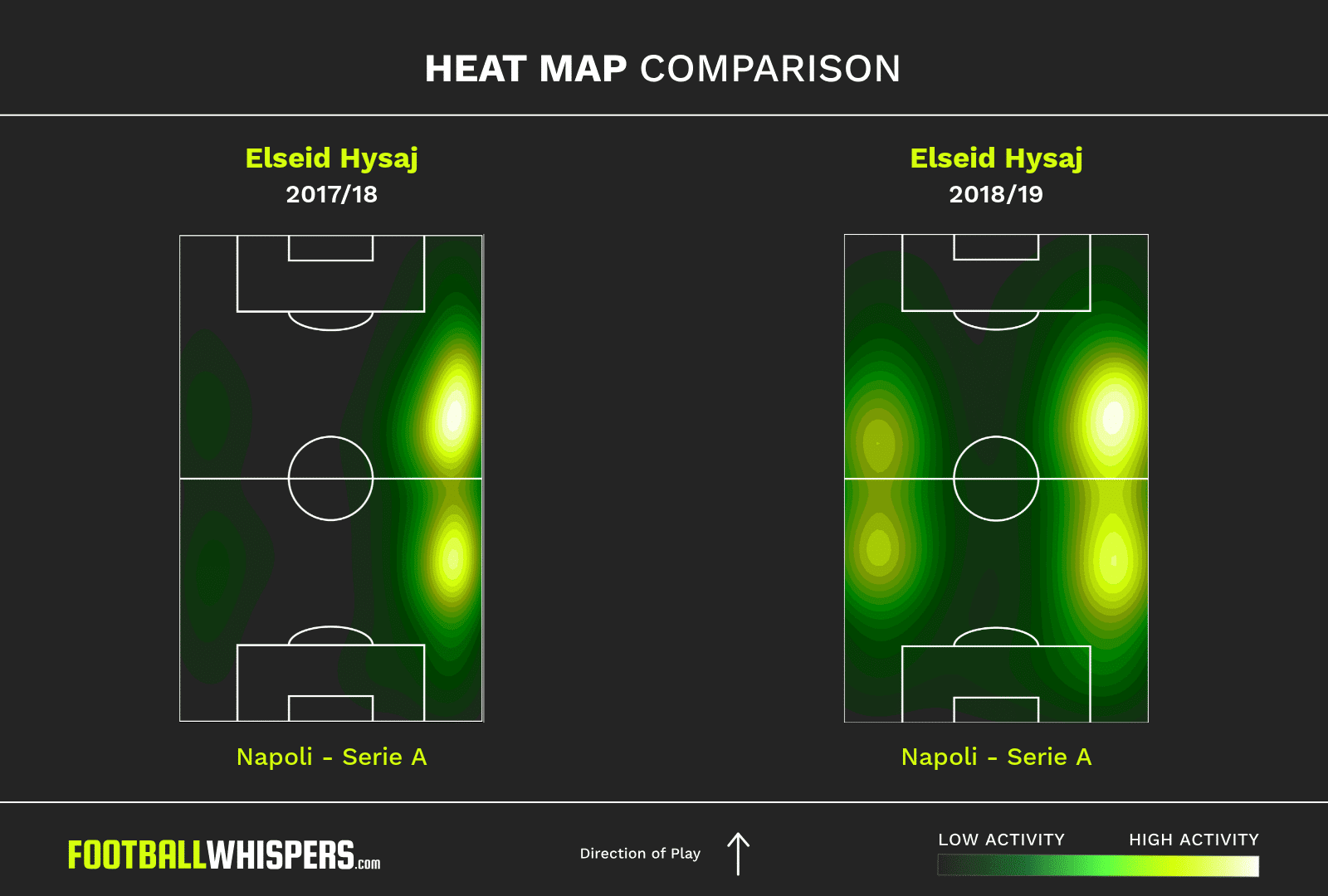 Although Jorginho has been criticised for his defensive output (or lack of it) since joining Chelsea, there's no disputing the effect that he's had on the midfield.

Sarri wanted Hysaj in the summer for a reason, and he could have a similarly large effect on the wing.