Elmina Sharks are sat rock bottom and have their work cut out to grab three points here. Will they find a way? Find out with our Elmina Sharks vs Medeama match preview with free tips, predictions and odds mentioned along the way.

An away win coming up

Third versus last, these teams are on opposite sides when it comes to form; while Elmina Sharks have no wins in their last seven games, Medeama lost just once in their last six games. It's fair to point out that Elmina Sharks are coming off back-to-back losses, and have won just five games this season; they have also struggled against Medeama in recent encounters. In fact, Medeama won all of the last three clashes between these teams; with this in mind, we believe that Medeama will take all three points from this game.

Visitors to open the scoring

Elmina Sharks have conceded a lot of goals this season; no team has allowed more goals than the 49 goals Elmina Sharks conceded so far. Because they concede a lot of goals, Elmina Sharks have a tendency to concede first; as they conceded the first goal in six of their last seven games. We've already pointed out that Medeama won the last three clashes between these sides; we should also mention that they tend to score first when they meet Elmina Sharks. As a matter of fact, Medeama drew first blood in three of the last four encounters between these teams. On that note, we are making the prediction that Medeama will open the scoring.

Medeama could move second with a win at the basement boys

It's been a long hard season for Elmina Sharks and things are not about to get easier with Medeama, who are joint second in the standings right now, coming to town. Everything points to an away win but Elmina Sharks do have a lot to play for. Never say never.

Elmina Sharks have been the worst team in the Premier League this season; they are last on the table, with just five wins in 31 league games. It's fair to mention that Elmina Sharks have no wins in their last seven games; they'll hope to put an end to their unwanted streak as Medeama come calling.

Medeama's five match unbeaten run ended against league leaders Asante Kotoko last weekend; as a result of that loss, they dropped from second to third on the league table. Medeama will take a trip to the Nduom Sports Stadium on Sunday; they'll look to bounce back from their recent loss by defeating last-placed Elmina Sharks.

A quickfire FAQ on Elmina Sharks vs Medeama 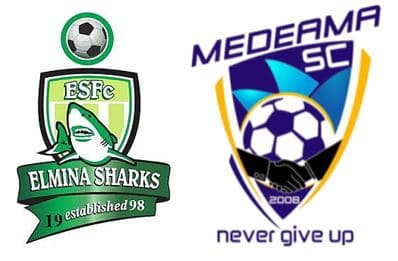