One of the Saturday's La Liga matches is the Elche vs Sevilla duel and we have prepared an in-depth preview of the match for you, along with some free betting predictions.

Our best tips and predictions for Elche vs Sevilla

If you are trying to find the best La Liga betting tips, our website is the right place. This includes our favourite predictions for the Elche vs Sevilla game:

With the guests having a great start of the season with a couple of wins, our prediction for this match is for Sevilla to win their third game in a row. After all, Elche is obviously the weaker team, they've managed to get just one point in the first two rounds of the new La Liga season and they've lost three of the last four duels against Sevilla.

Of the last four head-to-head meetings between Elche and Sevilla, two have gone over and two under 2.5 total goals. Judging on that, this game could go either way basically. However, three of the four matches played by these two teams in the league this season have gone under 2.5 total goals, so we expect to see another low-scoring game here.

In the first four matches played by Sevilla and Elche in La Liga this season, we still haven't seen both teams score. In addition to this, both teams have scored in just one of the previous four h2h duels between these two teams. With that in mind, we don't expect to see both teams scoring in this match either.

Top odds and important stats for Elche vs Sevilla

If you are looking for the top Elche vs Sevilla odds, check out the odds we selected from some of the best UK betting sites:

Elche vs Sevilla preview: Can Sevilla keep on winning?

After barely avoiding relegation last season by just two points, Elche started the new season with a loss to Atletico Madrid and a draw with Athletic Bilbao. While this is far from impressive, the team showed a lot of grit, especially in defence since they only conceded once. On the other hand, the team also failed to score a goal in those matches. At the moment, Pablo Piatti is the only injured player at the club.

The title race of last season has obviously boosted Sevilla's confidence for this season, despite the fact that the team finished fourth in the end. After all, Sevilla started the new season with a couple of wins over Getafe and Rayo Vallecano and the team also kept a clean sheet in both of those matches. Ocampos and Torres are injured right now and they will miss the upcoming Elche game. 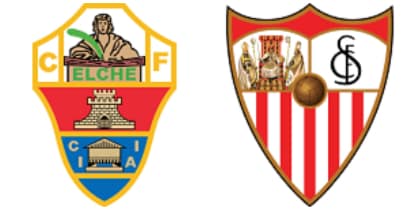