One of the closest duels in this round of La Liga is the Elche vs Real Sociedad matchup. If you want to learn more about this game, check our preview and our free betting tips.

Our best betting tips for Elche vs Real Sociedad

If you are struggling to find the right bet for the Elche vs Real Sociedad duel, check our to betting predictions for this game right here:

While Elche lost four of their last six games in the league, Real Sociedad won four of their previous six matches in La Liga, so it's clear which team is in a better form at the moment.

In fact, Real Sociedad has done better the entire season and they are a much better team, so we expect them to get the win in this game, just like they did in four of the last five games against Elche.

Three of the previous four head-to-head duels between Elche and Real Sociedad have gone under 2.5 total goals and we would be surprised if we saw three or more goals in this game.

The best odds and important stats for Elche vs Real Sociedad

If you want to bet on the top Elche vs Real Sociedad odds, check our list of odds from the best betting sites in the UK:

We expect to see a very exciting duel between these two teams, so let's check both of them out in more detail now:

With eight rounds left in this La Liga season, Elche fans will likely have to worry until the very end. At the moment, the team is six points ahead of Mallorca, the first team in the relegation zone. However, Elche lost four of their last six games in the league and that may be a poor sign for the team's hopes of survival.

That being said, Antonio Barragan and Javier Pastore will be back in the team after serving their suspensions. However, Lucas Boye will likely miss the game with an injury.

Thanks to their recent run of four wins in the last six games in La Liga, Real Sociedad remains in pursuit of the Top 4 finish, although they are currently six points behind Sevilla, Barcelona, and Atletico Madrid who are all tied in places two to four. At the very least, Real Sociedad has a good chance to secure a Top 6 finish like last season and a spot in Europa League.

However, the Basque team is struggling a bit with injuries since Nacho Monreal, Ander Barrenetxea, Carlos Fernandez, and Mikel Oyarzabal are all out of the upcoming game.

The most common questions for Elche vs Real Sociedad 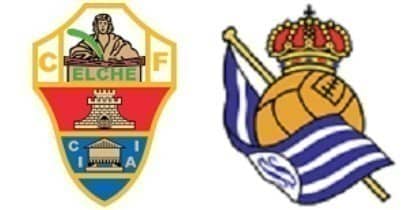