The first game of the upcoming La Liga round to be played on Saturday is the Elche vs Alaves duel. With that in mind, we have prepared a detailed preview of this match for you, along with some free betting tips.

Our favourite Elche vs Alaves betting predictions and picks

If you can't seem to find the right bet for the Elche vs Alaves duel, check our top betting tips for this match:

Elche and Alaves to Draw

Although Elche is in great form at the moment compared to Alaves who is without a win for ten games in the league, we don't expect the home team to have an easy job here.

In fact, we can see Alaves giving their all to avoid defeat in this game since it would be a huge blow for their chances of staying in the league. After all, Alaves beat Elche in two of their last three h2h duels and we can see this game ending in a draw.

The last five head-to-head duels between Elche and Alaves have all gone under 2.5 total goals and we can see that being the case in this game as well.

The best odds and key figures for Elche vs Alaves

If you are looking for the top La Liga odds, take a look at our list of odds for the Elche vs Alaves duel:

Predicted lineups, form, and team news for Elche vs Alaves

While the home team is currently in better position in the fight against relegation, this should be a very close and interesting game. So, let's check both teams out in more detail:

After a surprising draw in Madrid against Real in last round, it's now safe to say that Elche is in good form lately. The team has two wins and two draws in the last four games in La Liga and they have climbed up the standings after being in the relegation zone for most of the time. Elche is now six points away from the first team in the relegation zone.

Elche has a few players with injuries and other issues that are due to miss this game – Bigas, Pastore, Ponce, and Roco. Otherwise, the team is in good shape ahead of this game.

The short run of positive results by Alaves was again quickly replaced by a long run without a win in the league – their poor streak without a win is now lasting for ten games in La Liga. The team has consequently gotten back into the relegation zone and they are three points behind the first team outside of it at the moment.

On the positive note, Alaves doesn't have a lot of issues when it comes to team shape because only Ximo Navarro and Ruben Duarte are due to miss the next game with injuries.

Frequent questions for Elche vs Alaves 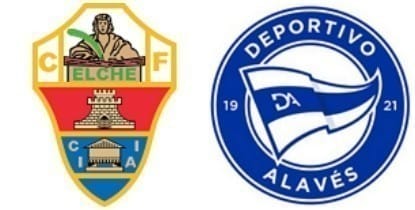