Brighton & Hove Albion are looking to bolster their attacking options this January and have identified Karl Toko Ekambi as a potential target. The 25-year-old Cameroon international was an option for Chris Hughton in the summer and, according to the Daily Mail, is now back on Brighton's radar.

The Seagulls are revisiting their interest in the Angers forward after failing to agree a deal with Celtic to bring Moussa Dembélé to the Amex Stadium. Hughton's men are in dire need of a player who can put the ball in the back of the net, having scored just 17 goals in 22 Premier League matches this season.

They're scoring at a rate of 0.77 goals per game which works out at just 29 goals over the entirety of a season. During the 2016/17 campaign, only one team scored fewer: Middlesbrough, and they finished second-bottom of the table.

Goals are king in the Premier League and Brighton have failed to score in half of their games since promotion. Glenn Murray leads the scoring charts with six, but what's perhaps more concerning is the fact only six players in the squad are off the mark for the season.

Ekambi isn't prolific by any stretch of the imagination but he is a goal threat and he would add to Hughton's attacking arsenal.

The versatile forward has 16 goals and seven assists in Ligue 1 for Angers over the past season and a half. He's been deployed in a number of positions: leading the line on his own, playing in an attacking two and playing on the left of the midfield.

Premier League clubs have been interested in him for some time. A report in the Daily Mail from back in 2015 claims Everton and Crystal Palace were interested in signing him from Sochaux.

Ekambi does seem ready made for the English top flight. He's the sort of quick, aggressive forward that all defenders dread playing against. He runs the channels, can hold the ball up and has got that bit of quality about him which means he's able to create something out of nothing.

He might not be a match-winner, but he's certainly a game-changer. Below, we've taken a look at how he compares to the players Brighton already have at their disposal. 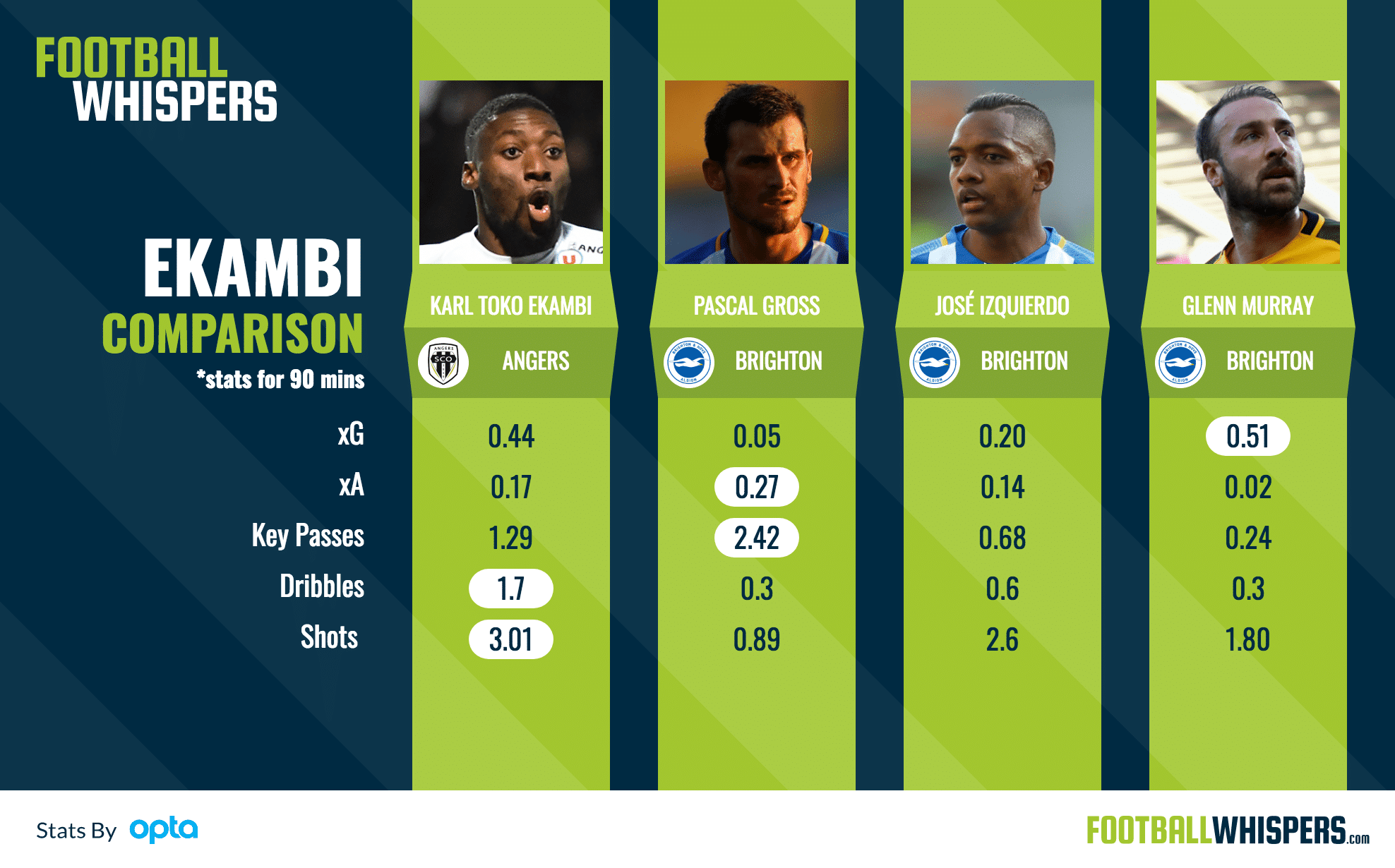 It was hard to pin down exactly what to look at when analysing Ekambi, but he's a forward so we've taken a look at stats in the attacking third. He's behind only Glen Murray for expected goals (xG), despite the fact only nine of his 16 starts this season have come as a striker. It shows that even when playing on the left of the midfield he's getting into dangerous areas.

In terms of expected assists (xA), he's second to Pascal Groß. The German midfielder has been a creative hub for the Seagulls this season, as highlighted by his 0.27 xA per 90 minutes.

Ekambi finds himself behind only Groß when key passes are analysed. When compared to the entire Brighton squad he's comfortably second with only Anthony Knockaert averaging one or more key passes per 90 minutes.

Furthermore, no player in the Brighton squad completes more dribbles (1.7) or has more shots (3.01) per 90 than Ekambi.

What's interesting in this list of stats, however, is the number of key passes he makes. Creativity isn't something many would associate with him but he's got superb version and wouldn't look out of place playing as a second striker in a withdrawn role. 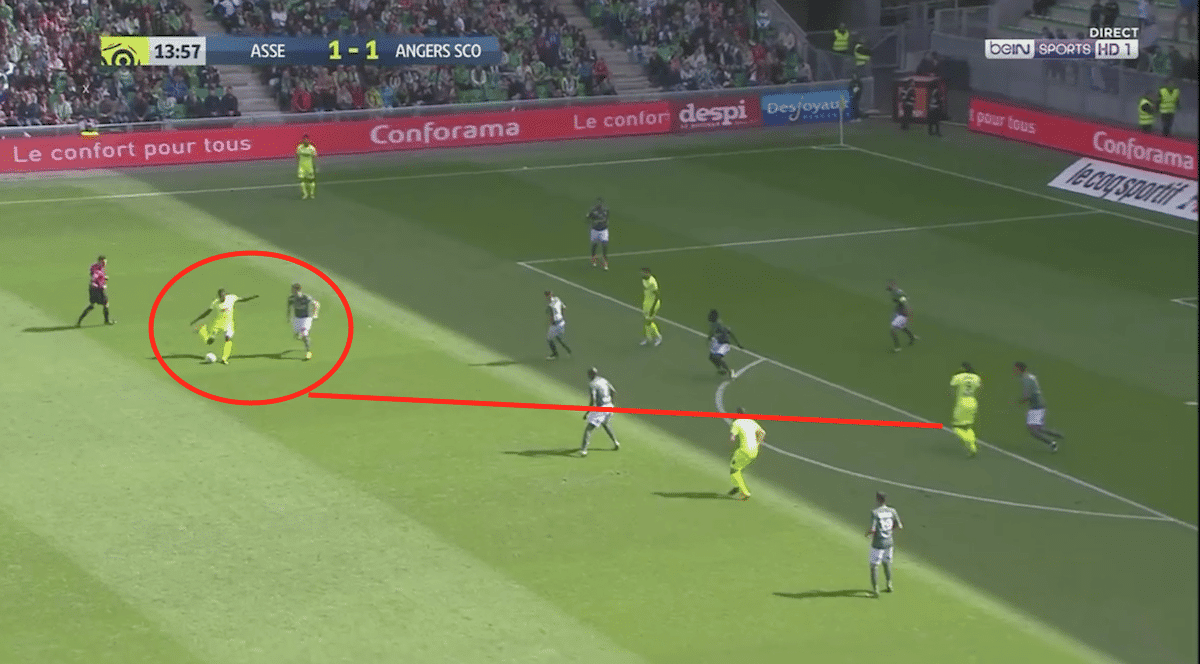 In the still above you see Ekambi in possession of the ball just outside the penalty area. He's drifted in from the left-hand side and dropped off to pick the ball up. He's afforded a lot of time and space to turn on the ball and face the opposition's goal, but it's here you see his quality.

He could play a pass to Enzo Crivelli, highlighted by the red line. It would be an incisive ball and it would break the Saint-Étienne midfield line. Crivelli is powerful enough to hold off the man closest to him and could get a shot away. Alternatively he knocks back to the man on the edge of the penalty area. 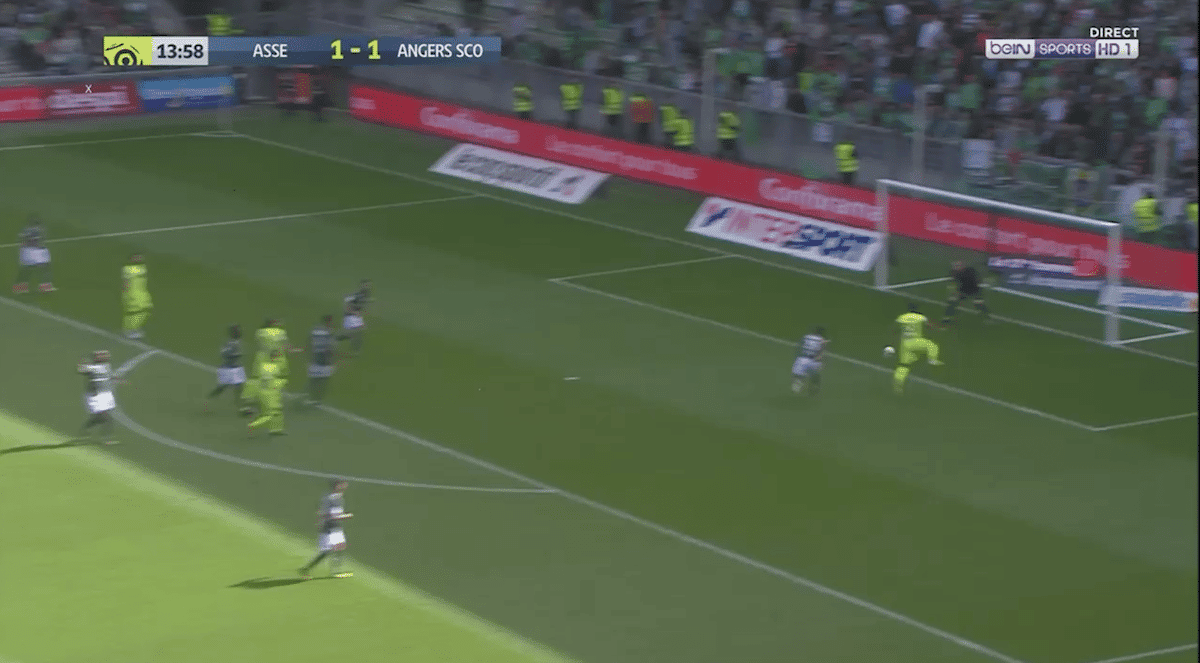 However, Ekambi ignores this option and instead plays a perfectly weighted pass into the path of his team-mate, who has made the run into the penalty area from the right-hand side. Believe it or not, the player isn't able to guide the ball home, instead hitting the crossbar and seeing his effort bounce clear.

The 25-year-old is an all-rounder but he's not the complete package. Murray and Tomed Hemed win on average 2.8 and 4.2 aerial duels per 90 minutes respectively, while Ekmabi wins just the 0.7. If Hughton wants the Angers forward to lead his line then Brighton may have to adapt how they use their strikers, because he won't be winning many aerial duels in a much more physical league.

Overall, Ekambi would be a bargain for around the £15million mark, Angers are believed to want £12.7million according to the Daily Mail report, and has the profile to really take the Premier League by storm. He could well be the latest in a long line of shrewd investments made by Hughton and the recruitment team at Brighton.