Two goals from Zlatan Ibrahimovic lifted Manchester United to a first trophy under Jose Mourinho as they beat a spirited Southampton 3-2 in the EFL Cup final at Wembley.

Ibrahimovic showed why he is world-class, but there were plenty of eye-catching performances from the men in white, who gave a fantastic account of themselves. 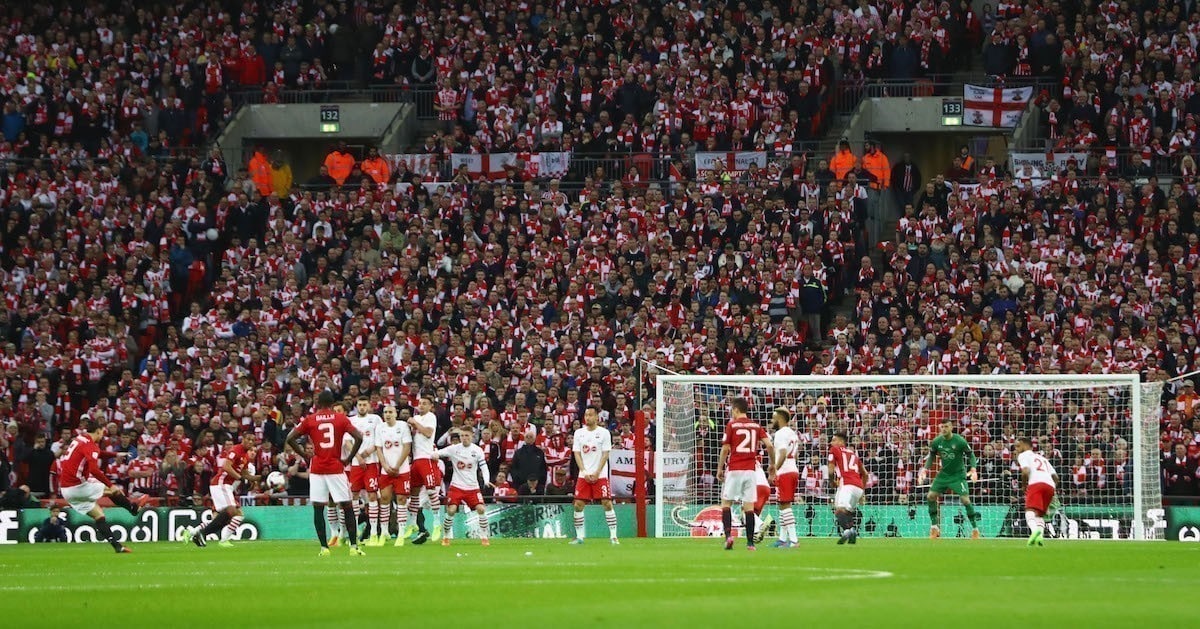 David De Gea – Made a great save to deny Ward-Prowse after 29 minutes and also denied Tadic. However, was unable to stop Gabbiadini from point-blank range. 6

Antonio Valencia – The Ecuadorian powerhouse had plenty of opportunities to venture forward but didn’t seem to at his flying best. 5

Eric Bailly – Failed to track Gabbiadini’s movement as the striker nipped in to score and such a slip in concentration is telling of inexperience at this level. 5

Chris Smalling – Was tight to Gabbiadini but couldn’t stop the striker scoring his second. Defended stoutly on other occasions but, like the rest of his teammates, he struggled with Southampton’s excellent deliveries into the box. 6

Marcos Rojo – Made fatal error that led directly to Southampton’s disallowed goal when he tried to hit a clearance through Soares instead of taking safer option and hitting out for a throw, before trying to atone with a despairing lunge that could have easily resulted in a penalty. Proved his worth going forward however, setting up Lingard for the second goal. 6

Paul Pogba – Stung Forster’s fists with a 25-yard effort after a few minutes and was predictably involved prominently throughout, with a mixed bag of instigating attacks and losing possession. 6

Ander Herrera – Brilliant piece of improvisation to flick the ball over Romeu’s head and draw the foul to win the free-kick for Ibrahimovic to score from. On top of that, his pinpoint cross picked out Ibrahimovic for the winner so his contribution in shaping the result can’t be denied. 8

Jesse Lingard – Was quiet until he exploded into life, matching his FA Cup heroics with an expertly curled finish into the corner to cement his status as a Wembley specialist. However, he lacked composure when another opportunity presented itself, blazing an effort over from close-range, which was his last involvement. 7

Juan Mata – Struggled in the first-half out on the right flank. Tried to track Bertrand’s running but it was often in vain and was hooked off at half-time. 5

Anthony Martial – Predictable and uninspired performance from the winger in the first-half, and was watched studiously by Cedric Soares. However, there was a moment in the second-half when he moved through the gears to blitz past a couple of challenges and play in Lingard, but United fans will be wondering why he seemed inhibited for much of the contest. 6

Zlatan Ibrahimovic – Barely involved before scoring his free-kick, but that’s the mark of a natural match-winner, in picking his moment to pounce not once, but twice, scoring the opener and a dramatic late winner to crush Southampton’s hearts. 9 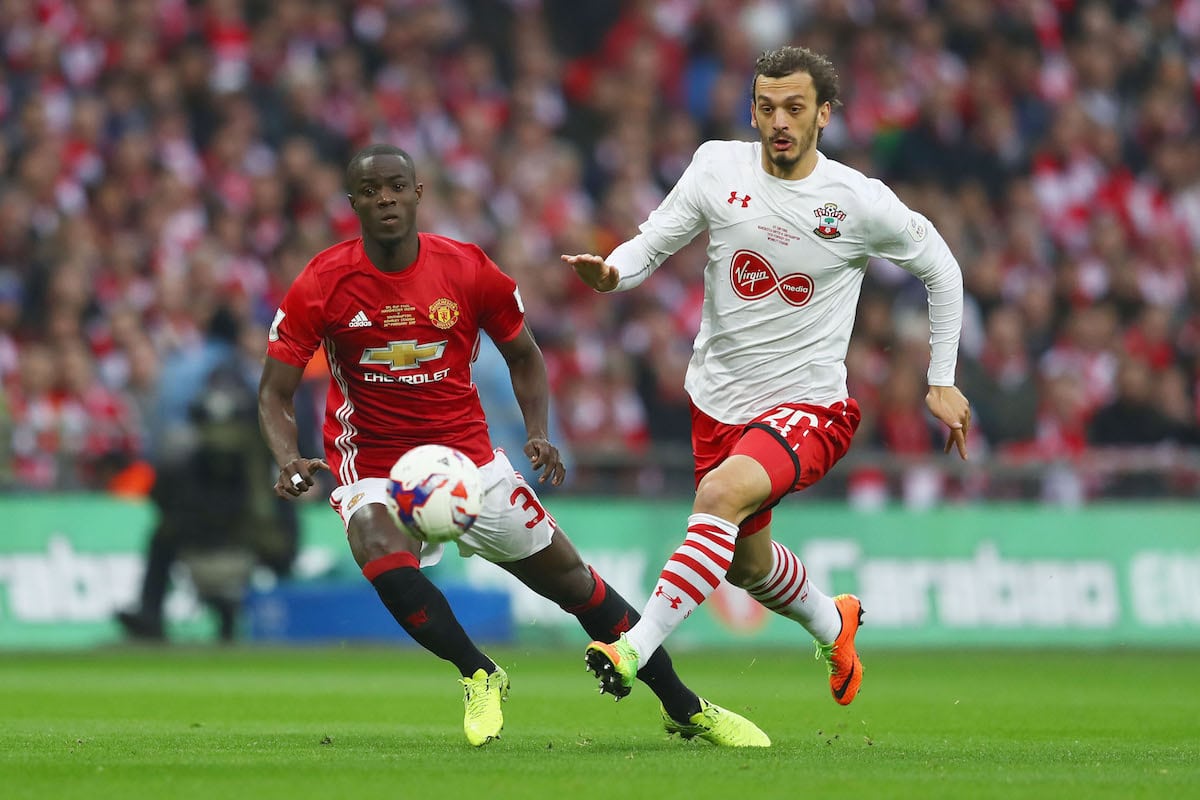 Fraser Forster – Questions over the opener, hesitated in diving to his right and couldn’t get there despite the ball being comfortably a yard inside the post. Had another nervous moment when he played a pass straight to Martial but also made a string of fine saves. 6

Cedric Soares – Got the better of Rojo and should have notched an assist only for Gabbiadini’s goal to be disallowed. Showed plenty of enthusiasm and supported attacks well. 7

Jack Stephens – Booked for a slide tackle deemed too robust by Andre Marriner. Didn’t do much wrong until he was nowhere to be seen for Ibrahimovic’s winner. 6

Ryan Bertrand – Showed some brilliant energy down the left, including a particularly eye-catching surge that showed Bailly a clean pair of heels. Delivered several quality crosses as well which tested United’s defence. 7

Steven Davis – Ibrahimovic’s free-kick went straight over his head. Saints captain would have certainly blocked it if he had jumped. The experienced Northern Irishman also switched off as Rojo ghosted past him and teed up Lingard. 6

Oriol Romeu – Shown an early yellow after a hilariously mistimed tackle on Herrera, which led to Ibrahimovic’s opener. The former Chelsea midfielder also failed to track Lingard for the second. However, he often showed his power in the centre and was unlucky not to score with a wonderful glancing header. 6

James Ward-Prowse – Wasn’t involved much but connected well with a shot just outside the area which tested De Gea’s reflexes but showed his quality delivery with a pinpoint cross to pick out Gabbiadini for the goal. Delivered several quality corners in to the box. 6

Dusan Tadic – Showed his menace when he caught Pogba neglecting his defensive duties and should have tested De Gea more with his effort from the edge of the area, but wasn’t as central to Southampton’s play as perhaps some would have anticipated. 4

Nathan Redmond – Looked sharp early on and forced an honest save from De Gea with a well-struck volley but wasn’t as heavily involved as he has been at times this season. 5

Manolo Gabbiadini – Had a goal wrongly ruled out for offside but showed great character, working hard to press United’s defence until he showed his natural poaching instincts to strike twice in quick succession either side of half-time to haul his side back into it. Looks to be a wonderful signing for Southampton, should have been walking away with the match-ball. 9

What Does Jose Mourinho See In Marouane Fellaini?