It just doesn’t happen. Paris Saint-Germain, the most dominant side in Ligue 1, do not get given the runaround by a 16-year-old midfielder.

Such a scenario would be mere fantasy. The storyline of a television show that has jumped the shark. Or so it seemed until Sunday night when Rennes came from behind to beat Thomas Tuchel’s on Sunday evening.

M’Baye Niang and Romain Del Castillo netted the goals for Julien Stéphan’s side but the star of the show was Eduardo Camavinga.

The teenager made his debut at the end of last season but is now part of Stéphan’s XI after the sale of Benjamin André this summer. Rennes didn’t bring in a replacement for their former captain, so much is their faith in Camavinga.

And the 2019/20 Ligue 1 season may only be two games old but their trust in the midfielder is already being justified.

His man-of-the-match – or perhaps that should be boy-of-the-match – display against the champions came off the back of a solid performance against Montpellier to kick off the new campaign.

Over his 180 minutes of action this term, Camavinga has misplaced just two passes. His 98 per cent pass success rate is one of the reasons Rennes find themselves with a 100 per cent record in the French top-flight.

The teenager doesn't just keep play ticking over, either. He's expressive and positive with his pass selection while still managing to solidify the middle third. Against PSG, he was splitting the lines with a number of incisive passes and carried the ball like a seasoned veteran.

The burst of acceleration Camavinga possesses enables him to evade his closest marker. Against the Ligue 1 powerhouse, he effortlessly bypassed Marquinhos and Marco Verratti in midfield and had them scrambling to make up ground. 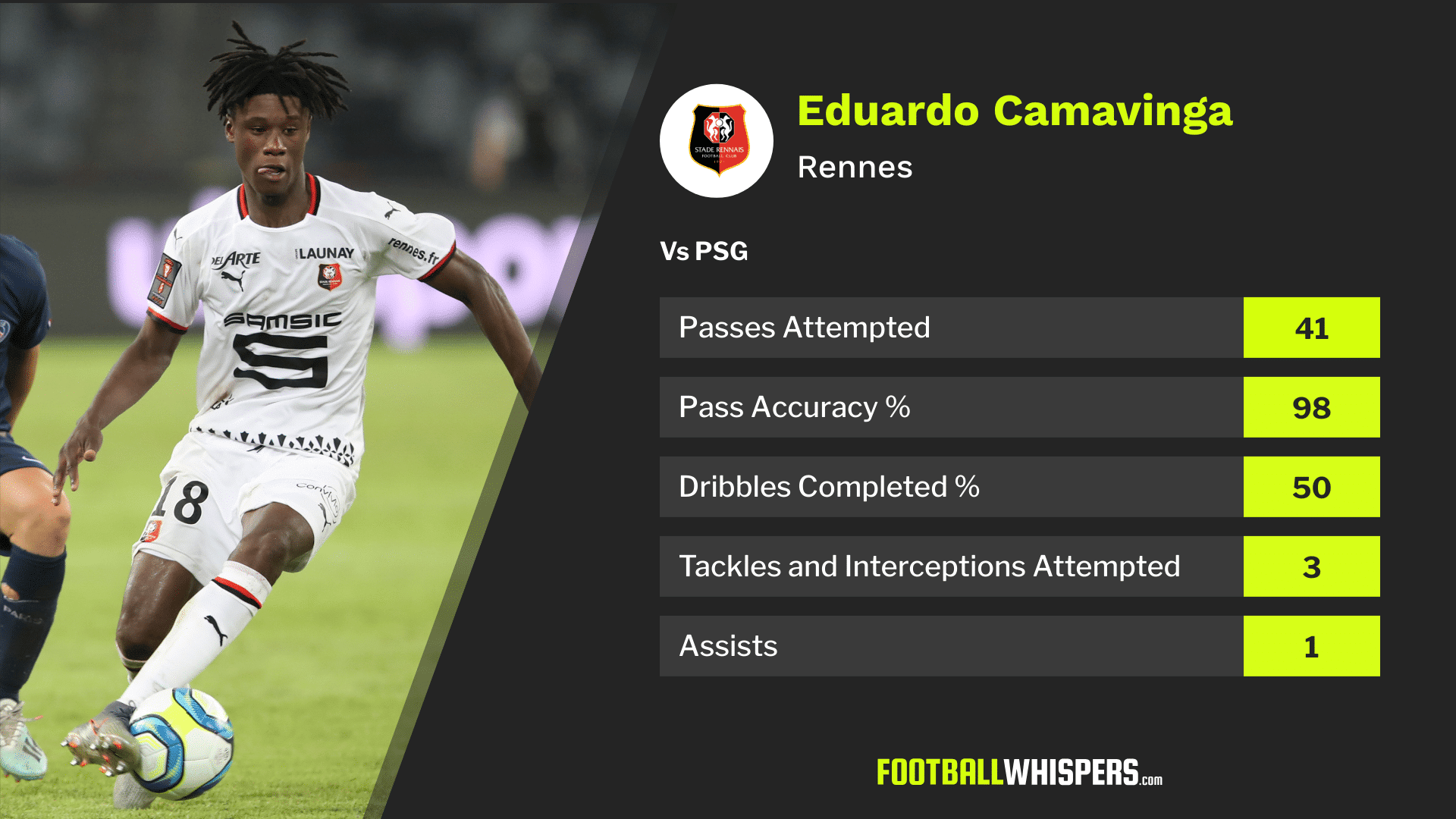 Camavinga is the latest star to emerge from the Rennes academy, one which has given the world Sylvain Wiltord, Yoann Gourcuff, Yann M'Vila, Moussa Sow, Yacine Brahimi, Abdoulaye Doucouré, Ousmane Dembélé, and many others.

Among those names are World Cup winners and the latter moved to Barcelona in a deal worth in excess of £100million. Rennes can boast about having developed elite talent for well over two decades, yet Camavinga could turn out to be their best yet.

Perhaps it's premature praise but his unnerving composure and the fact he's so confident on the ball, showing an intelligence in possession that no 16-year-old should have, feeds into the idea that the Rennes No.18 could be a generational talent.

If the performance he put in against PSG becomes the norm Europe's elite will soon be circling.

They can't resist an all-action, press resistant midfielder with a flair to slalom past opponents. Naby Keïta went for £52million when RB Leipzig sold him to Liverpool, Frenkie de Jong cost Barcelona around £70million while Tottenham Hotspur broke their club record to land Tanguy Ndombele for an initial £55million.

The trio are not identical but all share characteristics shown by Camavinga. The press-resistance, the way he strokes the ball around the pitch as well as his willingness to do the dirty work that so many creative players tend to forget about.

Rennes boss Stéphan deserves a lot of credit for trusting a 16-year-old in the centre of the park.

Under the 38-year-old, a former midfielder himself, Camavinga could develop into one of the most-sough after teenagers in world football.

Les Rouge et Noir usually sell to a middle man, a stepping stone club, before their academy graduates end up at a top-level team. This time around, however, they could sell direct to one of Europe's elite and in the process recoup a club-record fee.

Camavinga could be a game-changer for the club both on and off the pitch. All eyes will be on him this season. If he handles the pressure, there's going to be a new Prince of Ligue 1. Move aside Kylian Mbappé.