When it comes to his goalkeepers this season, Pep Guardiola must be enjoying the silence. Last season, the Manchester City manager grew exhausted with having to defend Claudio Bravo following his move from Barcelona.

Bravo, who Guardiola viewed as the ideal long-term replacement for Joe Hart, was supposed to be City's revolutionary sweeper-keeper, an experienced and astute operator who would fulfil his manager's wish for the man between the sticks; essentially being the team's 11th outfield player.

However, after a string of high-profile errors, the Chile international came under-fire from the media and, although Guardiola always offered a stout defence of the player, the questions raised about his suitability as a first-choice stopper for a team looking to win the Premier League title were valid.

And so, Ederson was signed from Benfica for £34million in the summer. Guardiola perhaps feared the Brazilian would be another error-strewn addition to City's goalkeeping ranks when he was culpable for both Manchester United goals in a pre-season friendly defeat to their bitter rivals but, luckily, those fears were misplaced.

Although City have rightly been praised for their attacking brilliance this season, Ederson has settled in well to his new surroundings and produced a series of top-class saves and assertive performances to firmly cement his place in the first team.

Instead of fielding questions about a Bravo blunder, Guardiola is waxing lyrical about the masterful string-pulling of Kevin De Bruyne or Gabriel Jesus' killer instinct while Ederson keeps things shored up at the back.

His steady presence between the sticks has ultimately contributed to Guardiola's construction of a Man City dream team, a dominating, free-flowing football side capable of building attacks anywhere on the pitch. It sometimes starts at the back, and Ederson has proven to be a smooth operator. Although he is not Brazil's No.1 as Seleção coach Tite prefers Roma's Alisson.

IMPRESSIVE FROM THE OUTSET

Ederson has been an impressive presence in goal since he was immediately installed as the first-choice at the Etihad. An excellent shot-stopper with a commanding physical presence, he exudes the confidence and decisiveness that was absent from Bravo's displays last season. Ederson, in stark contrast, came with an impressive portfolio of stats from Benfica last term. 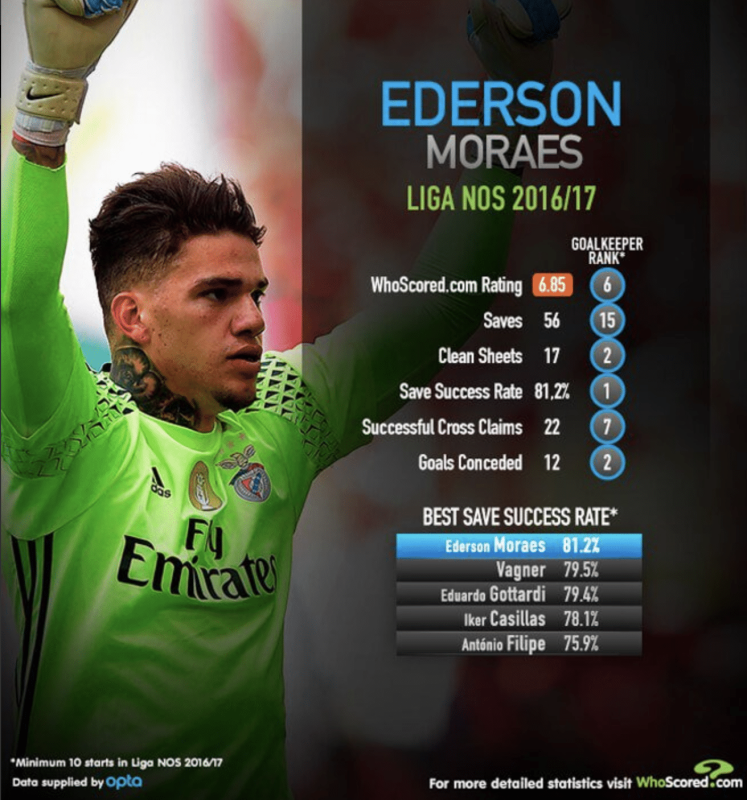 Following a clean sheet on his debut against Brighton & Hove Albion, Ederson has steadily grown in confidence despite some set-backs. In the 1-1 draw with Everton at the Etihad Stadium, Ederson allowed Wayne Rooney's shot to slither underneath him for the opening goal. Some critics pointed out an inability to get his feet right, but the 24-year-old didn't let that faze him.

While Bravo constantly looked like a bundle of nerves in the City goal last season, Ederson's self-confidence remained admirably undimmed. In fact, in that Everton match, the Brazilian showed his glorious distribution skills, launching a 70-yard pass accurately to the feet of Sergio Agüero to start an attack.

In the compilation video below, you can see Ederson's range of distributions. Notice how, in the one at 0:17 seconds, he immediately looks to see where Raheem Sterling is. Rolling it to the winger, he starts a counter-attack, which cuts Chelsea wide open and almost results in a goal.

Despite his mistake against Everton, Ederson completed 90 per cent of his passes (26 out of 29) and completed eight out of 11 long balls, an extremely impressive hit-rate when launching the ball to the other end of the pitch. Altogether this season Ederson has had 29 accurate long balls and 40 accurate throw-outs, a numerical indicator as to his range of distribution.

BRAVERY MAKES HIM A FAN-FAVOURITE

When Ederson got clattered by the high boot of Liverpool forward Sadio Mané, so much of the hullabaloo focused on whether it was a red card or not. It was a violent conduct here, and an eyes on the ball there. Little of the analysis praised Ederson's goalkeeping.

Ederson had read the pass, saw Mané's run and identified a need to intercept to deny a clear goalscoring chance. Bold, brave and brilliantly decisive, Ederson raced out and got his head to the ball to clear first, worrying about Mané studs slicing into his flesh second.

Knowing that City's defenders are well and truly beaten, Ederson realises he must stop Mané's path, even it means sacrificing his safety. 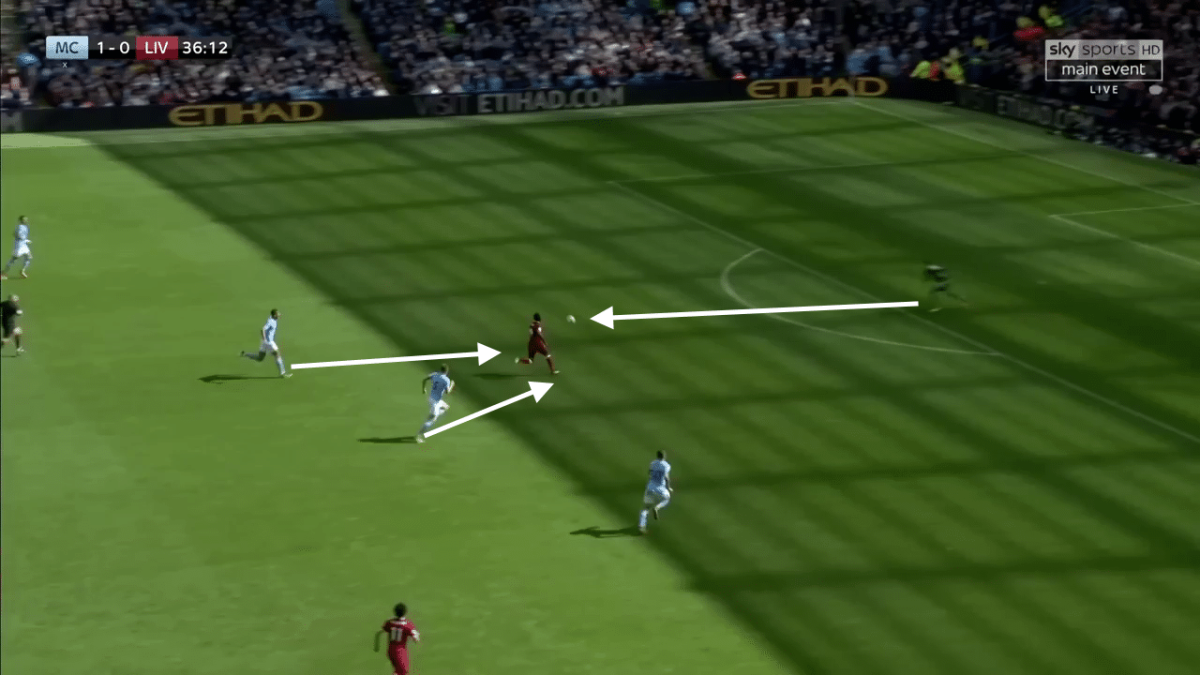 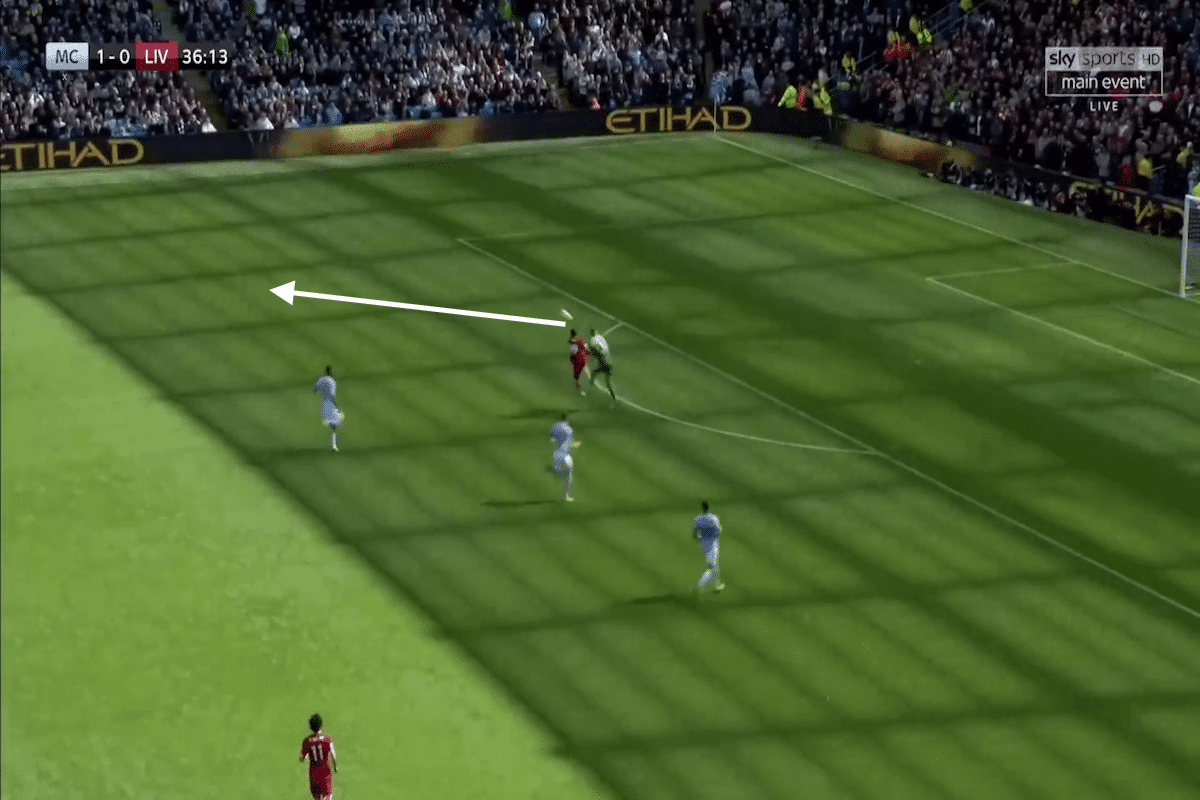 Guardiola's assessment of Ederson following the match offered valuable insight into why he views the goalkeeper as an adept practitioner of his philosophy.

“We play so high the goalkeeper has to play on the 18-yard box to help us with these forward balls. When the pitch was wet and the ball goes into that position, we have to defend with our goalkeeper.

“It is so important for us to feel that for our central defenders, with long balls, we have one guy to help us,” Guardiola said.

Not only does Ederson defend the goal-line when City are pinned back, he protects the 18-yard line because their defence is naturally pushing so high, essentially making him the deepest defender. Indeed, alongside Tottenham Hotspur's Hugo Lloris and Kasper Schmeichel of Leicester City, Ederson has the most sweeper clearances in the league with nine.

That show of courage to stop Mané earned Ederson a standing ovation as he was taken off, and he has been something of a fan-favourite ever since.

Ederson may have only made 13 saves in the league this season (only Burnley's Tom Heaton Julian Speroni of Crystal Palace, and West Brom's Boaz Myhill have made fewer due to playing fewer games), but that is because City are only averaging 6.4 shots conceded per game.

When he has been called into action, his shot-stopping has been exemplary. In the Liverpool game, Ederson got the better of Mohamed Salah in a one-on-one, reading the winger's intentions to go across him towards the far post, getting down quickly and parrying the ball out to one of his defenders.

As you can see below, the goalkeeper reads Salah's intentions as soon as he opens up his body. With the angle covered at the front post, Ederson is able to adjust and get down to Salah's shot. 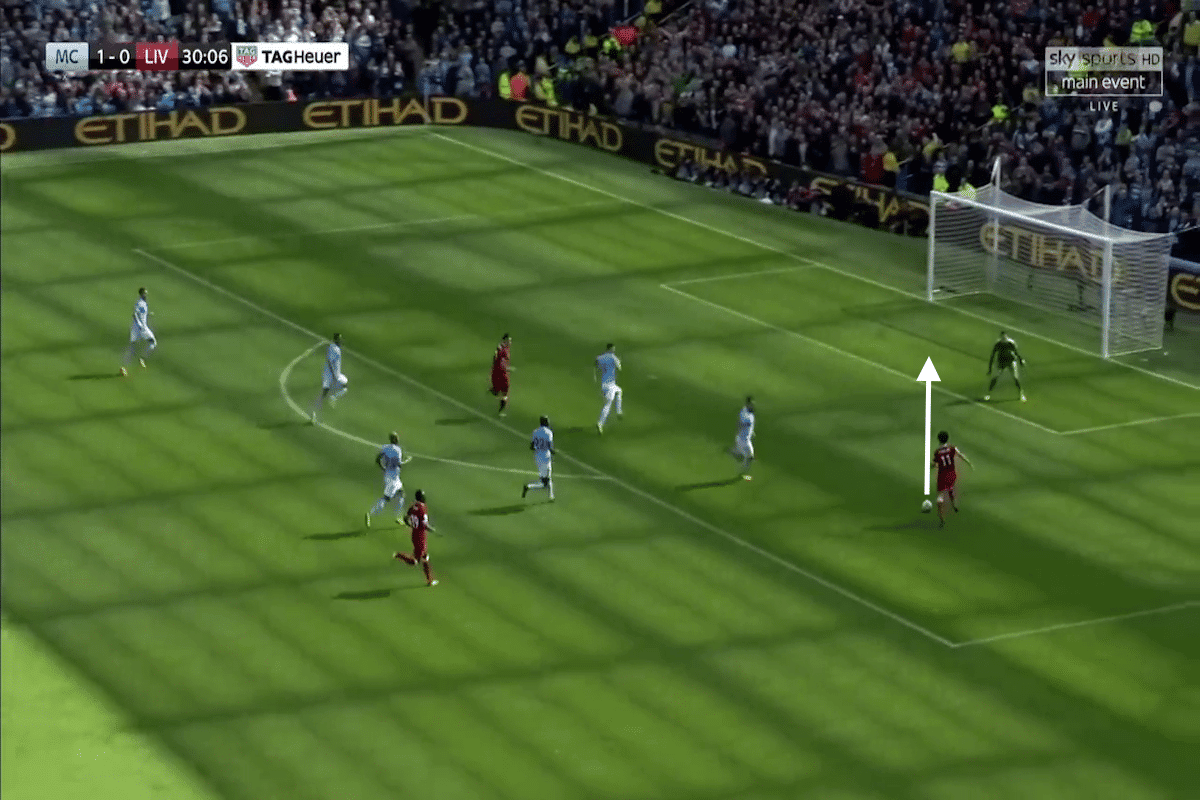 With his head up, Ederson knows that parrying the ball to the right is a risk with Roberto Firmino lurking menacingly, so he punches it straight out to Benjamin Mendy, trusting the Frenchman to clear. 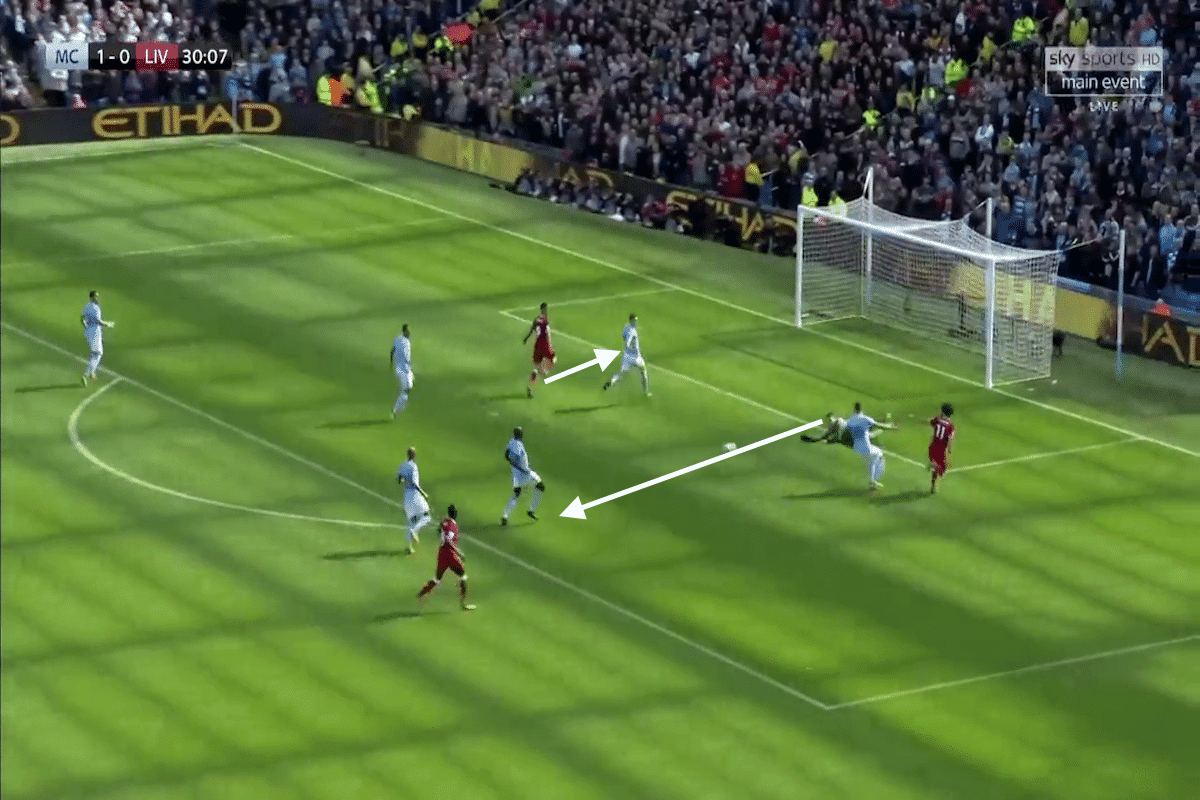 Similarly, Ederson made an excellent diving save in the Champions League group stage win over Shakhtar Donetsk, showing the reflex to get across to tip the ball away and the presence of mind to avoid the Donetsk striker waiting to pounce.

It's precisely this intelligent shot-stopping and decision-making that illustrates why Guardiola specifically added him to his wishlist for last summer. 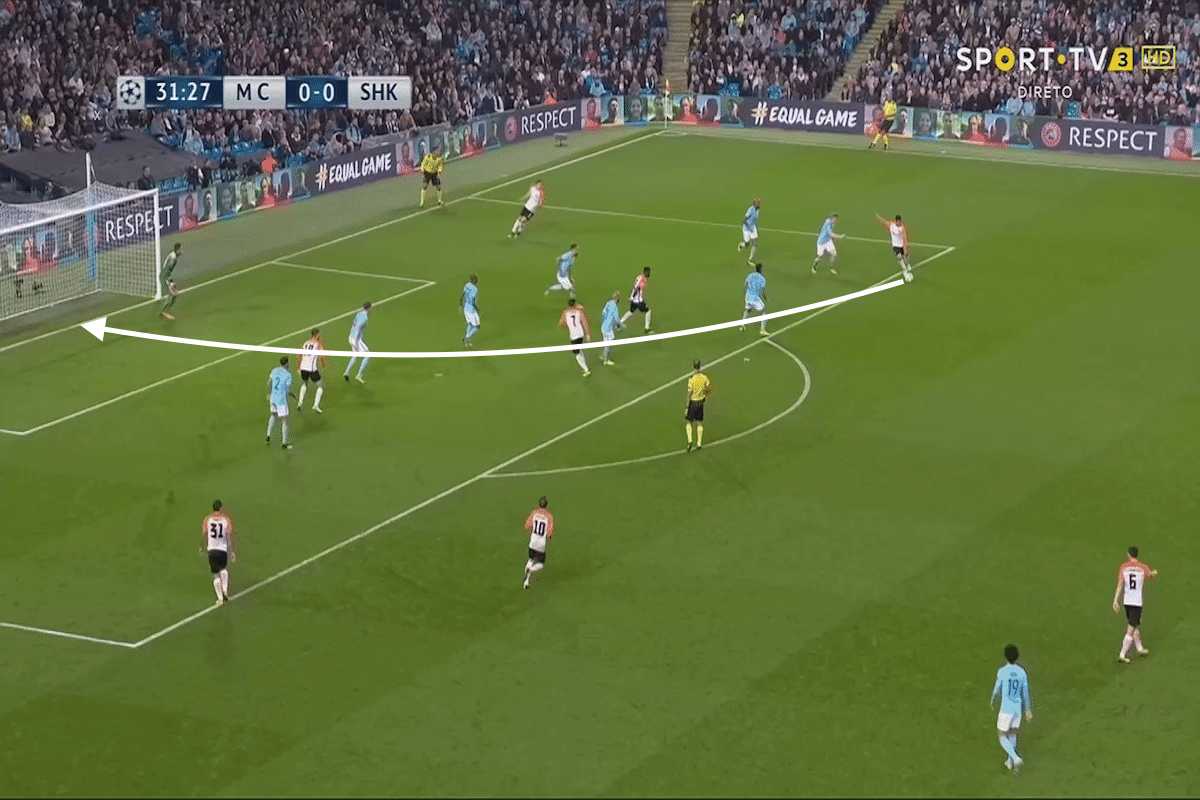 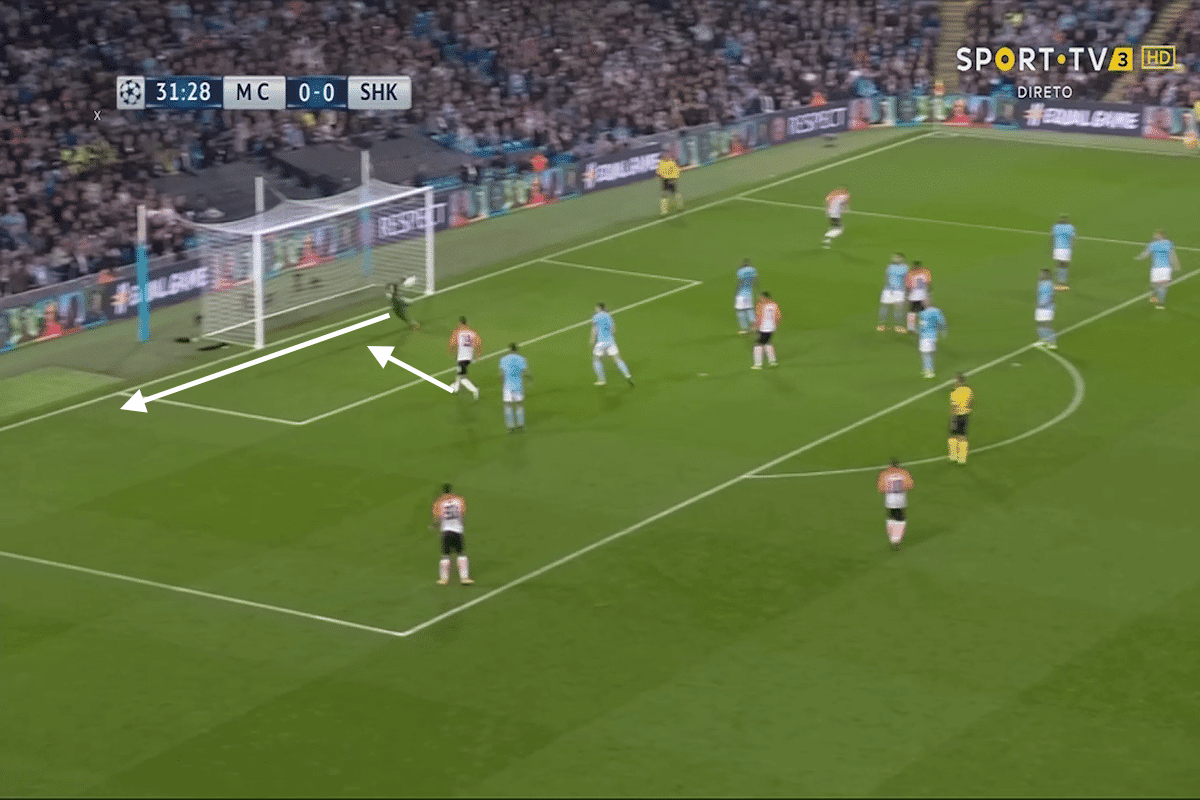 Being a goalkeeper is such a remarkably unpredictable livelihood. While Ederson is a portrait of consistency right now, it may only take one mistake leading to a goal to knock the Brazilian's confidence.

He is likely to face tougher examinations of his abilities in the coming weeks, too, with games against Napoli, Arsenal, Manchester United and Tottenham Hotspur before Christmas.

However, Ederson has proven himself to be made of stern stuff. Less than an hour after receiving oxygen on the pitch following that nasty collision with Mané, the keeper returned to the Etihad Stadium bearing his battle scars to revel in his side's 5-0 win.

That is largely due to the first-class medical treatment available to a player at an elite club like City. But it was also a glowing reflection of Ederson's professionalism; that he made a point of heading straight back to the scene of one of the more grisly incidents in his career to join the celebrations.

With the attacking components operating at optimum efficiency, an in-form John Stones in command in defence and a considerable upgrade between the sticks, we can see the various pieces of Guardiola's puzzle at City falling seamlessly into place. With such strength and quality in every department now, it's becoming increasingly difficult to look beyond them as Premier League champions.