It feels a matter of when and not if Eberechi Eze will ply his trade in the Premier League. The 21-year-old is lighting up the Championship for Queens Park Rangers and teams in the English top-flight are taking note of his performances.

It’s a remarkable turnaround for Eze who was without a club in 2016. Milwall released the then 18-year-old and he planned to continue with his education while also getting a part-time job.

He was deemed ‘too small’ for Arsenal and had unsuccessful spells with Fulham and Reading before finally catching the eye of Chris Ramsey, QPR’s technical director, during a trial.

Eze made his debut for QPR during the 2016/17 campaign before spending the first half of the 2017/18 season on loan with Wycombe Wanderers. Upon returning to Loftus Road, the fleet-footed playmaker was thurst into the first-team and went on to make 16 Championship appearances, netting twice.

Steve McClaren, then manager of QPR, handed the attacking midfielder the number ten jersey ahead of the 2018/19 campaign. Some players would be weighed down by the pressure but not Eze.

His quick feet had Championship defenders dancing to his rhythm. His first full campaign was all about adaption, shouldering the burden of being QPR’s creative force. And he did just that, chipping in with four goals and three assists.

This season, however, Eze is comfortable with his task and is thriving in the knowledge that Loftus Road is his playground.

Under Mark Warburton, the QPR No.10 has taken his game to the next level. Despite only being 13 matches into the 2019/20 season, Eze has already matched his return from last year.

Eligible for #Nigeria#QPR midfielder @EbereEze10 is undoubtedly one of the brightest stars ✨ in the English Championship.

He bagged a brace from the penalty spot in the 3-2 away win at Hull City.

But unlike many other wide forwards, Eze is not just a goal threat. His entire game isn't built around goals or assists. Instead, he's a creative force who can dictate matches.

At first glance, it would be easy to compare him to Wilfried Zaha. Both prefer to start on the left, both are adept dribblers and both are comfortable with the ball. But whereas the Crystal Palace man likes to isolate opponents in wide areas before darting into dangerous zones, Eze opts to drop deep and play almost as a centre midfielder. And this is what makes him different to other players with a similar skill set.

There's a touch of Philippe Coutinho about him. By no means is he in the same sphere as the Brazilian maestro in terms of quality, but the way Eze picks up intelligent positions on the pitch and sets the tempo for the team is very reminiscent to that of Coutinho at Liverpool.

The Bayern Munich man was ultimately judged on goals and assists but his creativity was what Liverpool often required. The same goes for the 21-year-old now. This unique playing profile resulted in Barcelona parting with over €100million to pry Coutinho away from Merseyside.

Every team in the Premier League could make use of a player like Eze. Though top teams might be reluctant to sign him directly from QPR, James Maddison may be used as evidence as to why he's worth the risk.

The former Norwich City man lit up the Championship and was linked with Tottenham Hotspur, Liverpool and Manchester United before finally signing with Leicester City.

Despite his performances for the Canaries, Maddison was unknown at a higher level. There was no guarantee as to whether he could make that step up. He did. And now that £20million fee looks like a bargain. 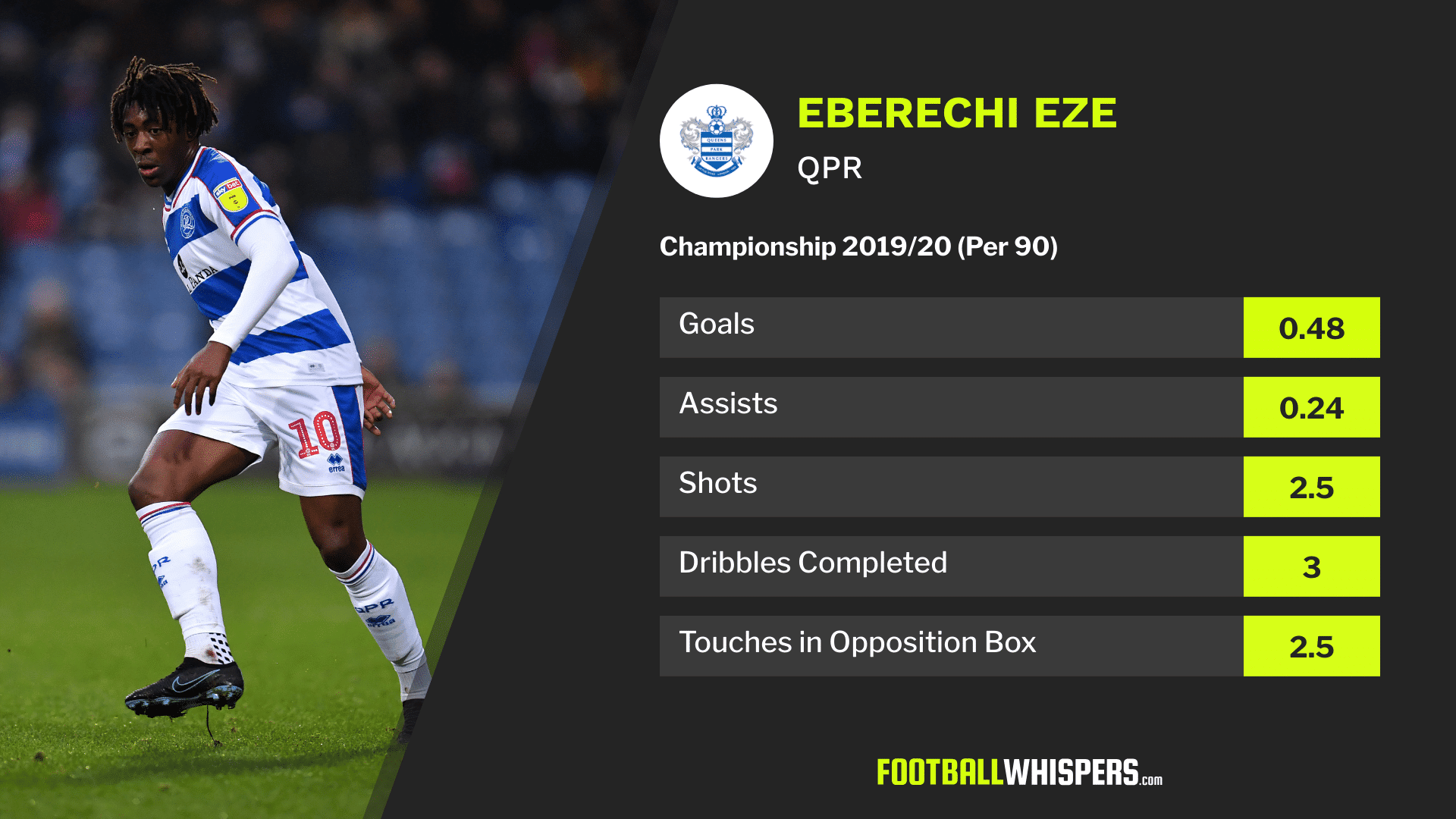 It was a similar story with David Brooks. The Welsh winger impressed for Sheffield United, was linked with some of the top six but ultimately moved to Bournemouth. After showing he could hold his own in the top flight, the 22-year-old began to regularly be linked with moves to teams competing for a European spot.

Daniel James bypassed the stepping-stone move and went straight to Manchester United. He's arguably been their best player this season. It highlights the fact Premier League at the top end of the table are now more open to making moves for Championship stars. And Eze could be the latest player to benefit from this shift in mentality.

The QPR poster boy is still very raw. He's nowhere near the finished product but his unpredictability is what makes him such an intriguing prospect.

Eze can slalom his way past opponents from the middle third, strolling into the area before passing the ball past the goalkeeper. But then he's not just reliant on beating opponents with the ball to be a threat. He's a set-piece expert, too, and he puts his ability on the ball and his vision to good use in open play.

Some of the 21-year-old's passes are right out of the top drawer and he can single-handedly decimate defensive lines with the flick of his boot.

Under the right manager, Eze could be transformed into a box-to-box midfielder, similar to how Kevin De Bruyne and David Silva went from wide forwards to central hubs. It'd be a gamble but football is all about fine margins at the top level and such a move could ultimately be the difference between the top six and the top four.

Teams should test the resolve of QPR with a January bid. The sooner Eze is in the Premier League, the quicker he'll adapt and potentially flourish on a bigger stage.