Dundee United are very much in their groove right now. Can they keep it going here? Find out with our East Fife vs Dundee United match preview with free tips, predictions and odds mentioned along the way.

East Fife unable to keep up

East Fife have not won in four matches having lost their last two. That's seen their league cup campaign get off to an utterly woeful start. Things don't get better as Dundee United come to town. Dundee United have won four on the spin and had collected three draws prior to that giving them a seven game unbeaten streak. They already boast a better team so better form and more confidence spells trouble for an East Fife side that have lost 3-0 and 2-0 in their last two games; Dundee United have scored 12 in their last four.

A win and a shutout

12 goals scored in the last four might sound impressive for Dundee United. It is. Their defensive record is pretty damn good too though; they've only conceded three goals in their last six matches recording three clean sheets in the same time period. With the fact that East Fife are a) seen as inferior anyway given their place in the pyramid and b) have failed to score in their last two, this should be like taking candy from a baby for Dundee United.

Our final tip brings us to an anytime scorer prediction, which isn't necessarily the most straight forward tip to make. Despite that, we are highly confident that Lawrence Shankland is a good bet to find the net against an East Fife side that haven't kept a clean sheet since April 1st. Shankland is a man in form with three goals in his last three games; he's played under an hour in two of those appearances. His confidence is sky high and any chance will be gobbled up.

Check out the key stats for East Fife vs Dundee United

Dundee United cruising to another win

You can spend a long time talking about league pyramids, player quality and form. The fact of the matter is that East Fife measure up worse than Dundee United on every single stat. If they're to get anything from this game then Scott Gallacher will need to have a stormer between the sticks. For Dundee United, their form is impressive and they'll rightly see this as another match they can – and should – win. Lawrence Shankland is a huge part of their impressive form and will be their main danger man. 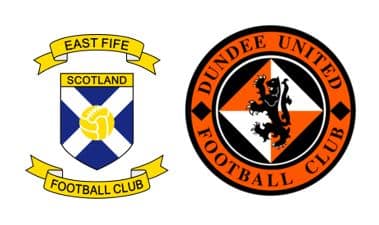