As Álvaro Morata continues to struggle in front of goal, Chelsea have made it clear that bringing in another striker is a priority during the January transfer window.

Yet even accounting for their desperate need for such an addition, the scattergun nature of rumours surrounding possible targets has become laughable.

Despite their immense spending power and the cache that comes with being able to offer a lucrative salary, Champions League football, a chance to play under Antonio Conte and even an SW6 postcode, the Stamford Bridge outfit have been linked with a bizarre list of potential signings.

Having chased Andrea Belotti, Andy Carroll and Peter Crouch. Chelsea. In 2018. Reduced to looking at a pair of strikers who have managed just ten Premier League starts and five goals between them this season.

Yet while the former England international duo are struggling for playing time at clubs in the bottom half of the table, a more established name emerged late last week.

The Blues were, according to Italian transfer guru Gianluca Di Marzio, in negotiations with AS Roma over a bid for Edin Dzeko.

Writing on his own website, the Sky Italia journalist reported that a fee of €50 million was being discussed in order to bring the Bosnian and left-back Emerson Palmieri.

The interest in the Brazilian-born defender had been well-documented, but a bid for the former Manchester City man was met with a few raised eyebrows.

Almost 32 years old and cup-tied in the Champions League, Dzeko has been subjected to seemingly endless criticism from his time with Manchester City and throughout his two-and-a-half-years in the Italian capital.

Lambasted for being wasteful in front of goal, lazy and dispassionate, the striker has clearly been affected by those views, discussing them at length in a recent interview with Sasa Ibrulj of The Guardian.

He admitted to ignoring the knocks against him during his time in England, but after just eight goals in his debut campaign with Roma, it became overwhelming.

Fans of his own club labelled him Edin Cieco – “Blind Edin” – and booed him at the Stadio Olimpico, but the man himself knew he would win them over eventually. “I don’t run? I don’t give my best? Come on! That is a joke,” he said.

“People think that they care more than I do, but that is simply not true. It’s never easy to read headlines like that, to hear fans shouting things like that… but people do not see that you are a human being too and that you have problems like everyone else.”

However, those same supporters would tell the Chelsea faithful that over the last eighteen months they have seen a very different player to the one most in England believe Dzeko to be.

His 2016/17 season was a truly unforgettable one, getting off to the best possible start with a goal on the opening day against Udinese. 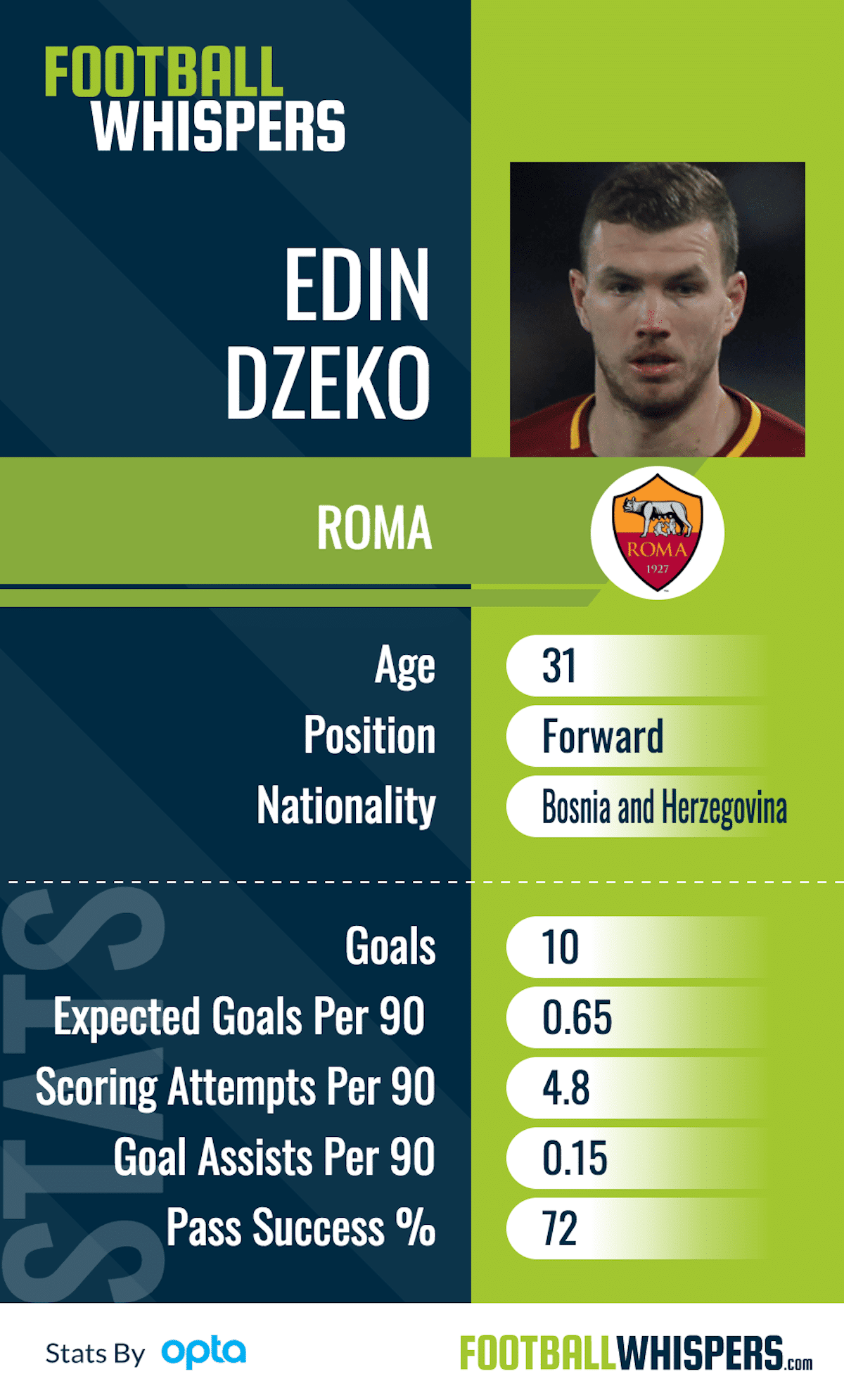 He would bag 28 more in the league, adding another ten between the Europa League and Coppa Italia to become only the fourth Roma player ever to score 30 times in a single season.

He would end the campaign with 39 in all competitions, netting with a ruthlessness that catapulted the Giallorossi into a second-placed finish, one spot above Maurizio Sarri’s widely acclaimed Napoli.

Dzeko benefitted of course from the presence of Mohamed Salah, but the Liverpool winger undoubtedly found greater space as opponents worked to neutralise the threat provided by his Bosnian team-mate.

Pushing behind the last defender to help Roma’s counter attack or working as part of their build up play, his goals came in a variety of ways. He struck 23 with his favoured right foot, 12 with his left and four headers, with three of his final tally coming from outside the box as he feasted against Serie A’s weaker sides.

Indeed, it must be noted that he failed to score against Juventus or Lazio, but did manage two against Napoli, a return that might see him mesh well with Álvaro Morata, a player who loves the big games but often fails to deliver against more mundane opposition.

Dzeko has begun the current season in much the same manner, already boasting ten goals in 21 Serie A appearances but went scoreless in games against Juventus, Napoli, Lazio and Fiorentina.

Yet he did get the better of the very team now looking to prise him away from Roma, beating Thibaut Courtois twice in October’s 3-3 draw at Stamford Bridge, and claiming an assist in the 3-0 triumph in the Italian capital later that same month.

Those were two performances that Conte and his club could not fail to have noticed, while also seeing Roma’s sporting director Monchi selling for maximum value, something he repeatedly did while in charge of Sevilla before moving to Italy.

Then there are the words of the Bosnian’s representative on Friday, which did little to quell the talk of a move.

Agent Irfan Redzepagic told the Romagiallorossa website that “Dzeko wants to stay at Roma” but then went on to add much less clear comments.

“Have I spoken to Conte or Chelsea? My role means I can’t reveal certain transfer market dynamics,” he said. “I understand the question, but I have a very specific role. All I can say is that Conte likes Dzeko.”

That is unsurprising given his form over the last two seasons, and a deal would make much more sense than the likes of Crouch, Carroll or any other outlandishly rumoured target.