Brighton & Hove Albion have been on the hunt for attacking reinforcements this month, having been outscored by every Premier League side except bottom-placed Swansea City so far this season.

Linked with Aleksandar Mitrović of Newcastle United and Celtic‘s Moussa Dembélé, they have instead moved to sign Dutch under-21 international Jürgen Locadia in a club-record £14.1million deal from Eredivisie table-toppers PSV.

Locadia, 24, came close to joining Wolverhampton Wanderers in August, only for PSV to pull the plug on the deal as the versatile forward was undergoing a medical with the Championship club.

The Dutch side's decision to hold on to Locadia was vindicated by the player's impressive contribution of nine goals and two assists in 15 league games, helping Phillip Cocu's men assert themselves as Holland's top team so far this season.

Wolves' loss will prove to be Brighton's gain, as Locadia has all the tools to transform the Seagulls' flagging frontline, with his pace, two-footedness and eye for goal.

The Dutchman has split his time between playing out wide on either flank and centrally as a striker since making his PSV debut in 2012, returning 62 goals in 178 all-competitions games for the club.

His versatility could prove a real asset for Chris Hughton, but the Brighton manager's comments upon signing the 24-year-old gave a clear indication of which position the new man will feature in at the AmEx Stadium.

“We are delighted to have signed Jürgen and pleased to welcome him to the club,” Hughton said.

“He is a player we have been aware of for some time and it's been no secret we have wanted to add a striker of his type.

“He is a strong, powerful and quick centre-forward, with a real eye for goal and will increase our attacking options in the second half of the season.”

Most of Locadia's appearances this term have come as a central striker, but even when starting through the middle he tends to drift wide to find space. The former Willem II prospect, at 6ft 1in, is a powerful presence in the attacking third and likes to isolate defenders in one-vs-one situation, using his speed and strength to burst beyond them and through on goal. 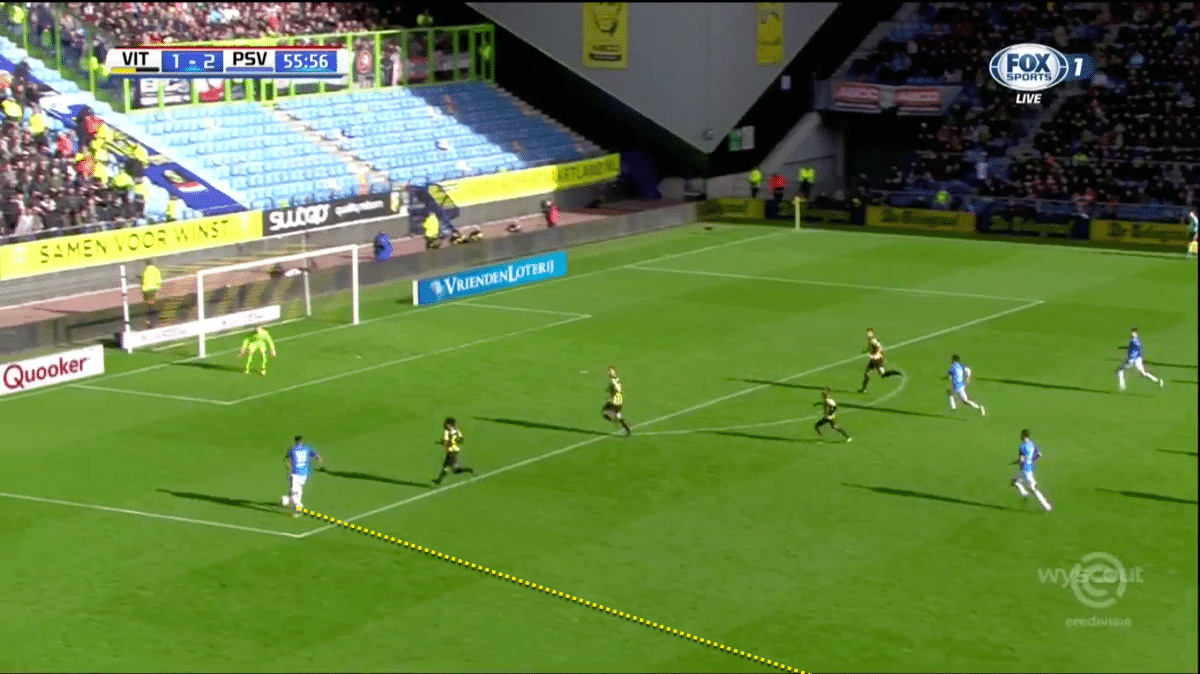 We see one such example of this this tendency in the above image, taken from a game against Vitesse. The now-Brighton man has made a run into the left channel, breaking into the penalty area after receiving possession. 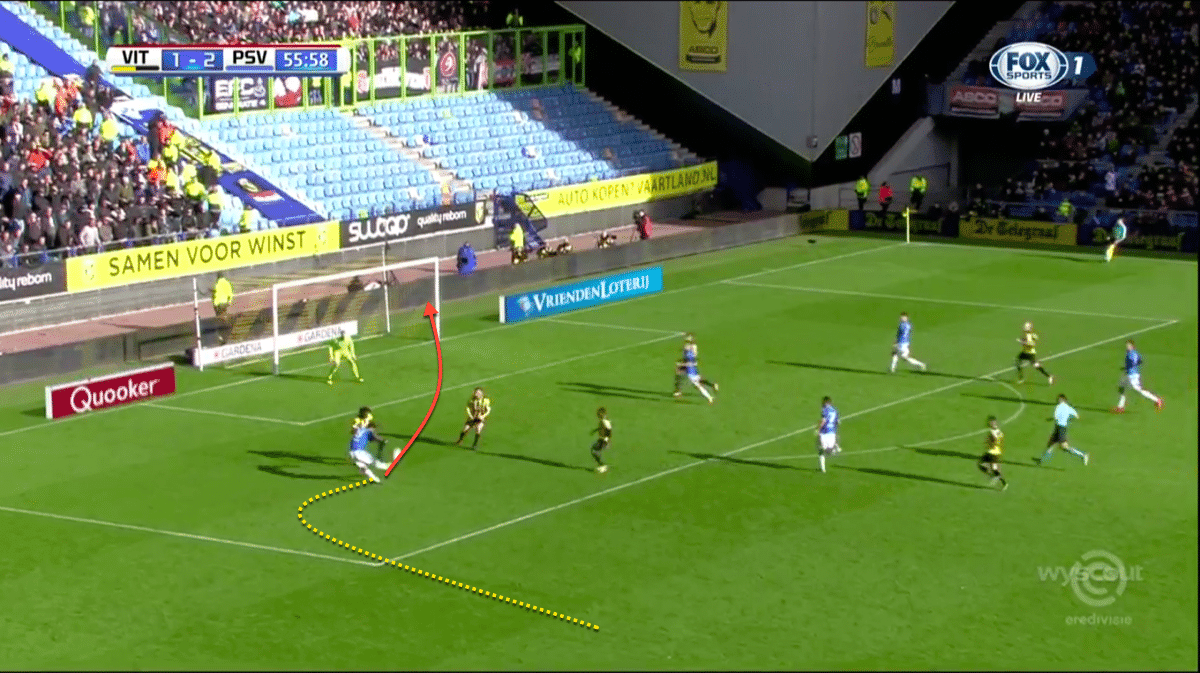 In order to create a more favourable angle for a shot, he skilfully turns inside his marker, opening up the opportunity to send a curling strike towards the far corner with his stronger right foot.

Locadia's ability to operate on either wing should dovetail nicely with Brighton widemen Anthony Knockaert and José Izquierdo. If he is played in a wide role opposite either of the Seagulls duo, he will offer the option for positional switching with his cohort on the other side. Or, if used as a striker, the Dutchman's preference for drifting wide will create space inside for Knockaert or Izquierdo to exploit. 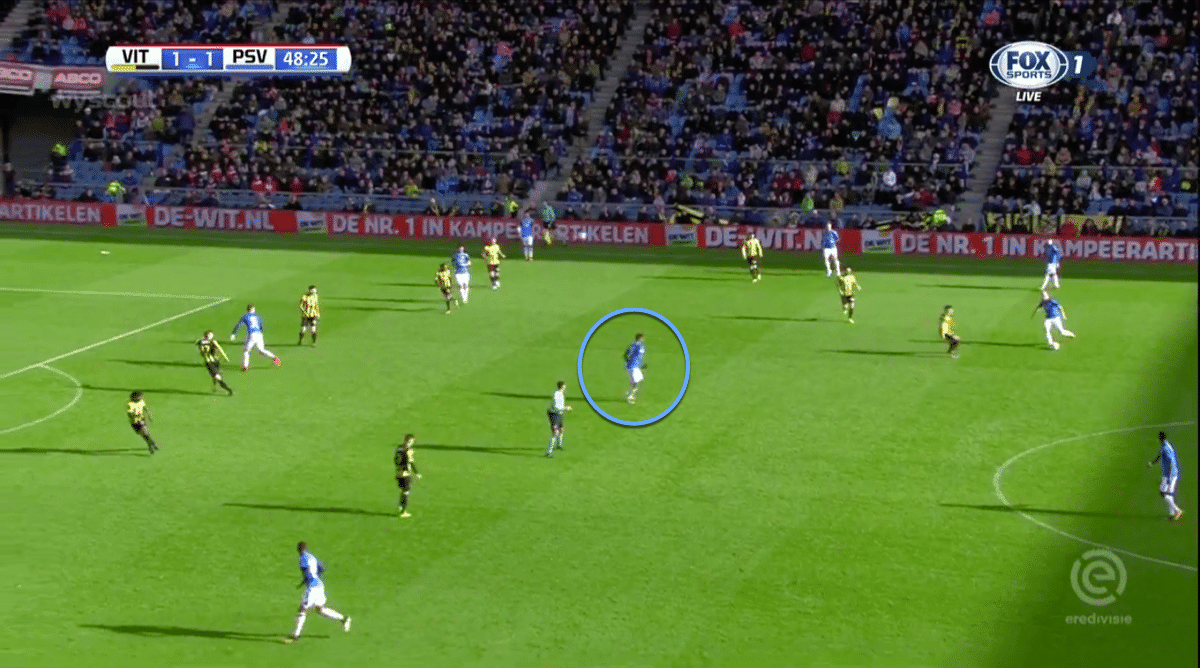 But it is not only out wide where Locadia is able to find open acreage. When deployed centrally, he is also able to drop away from the frontline to pick up space in the No.10 zone, as pictured above. 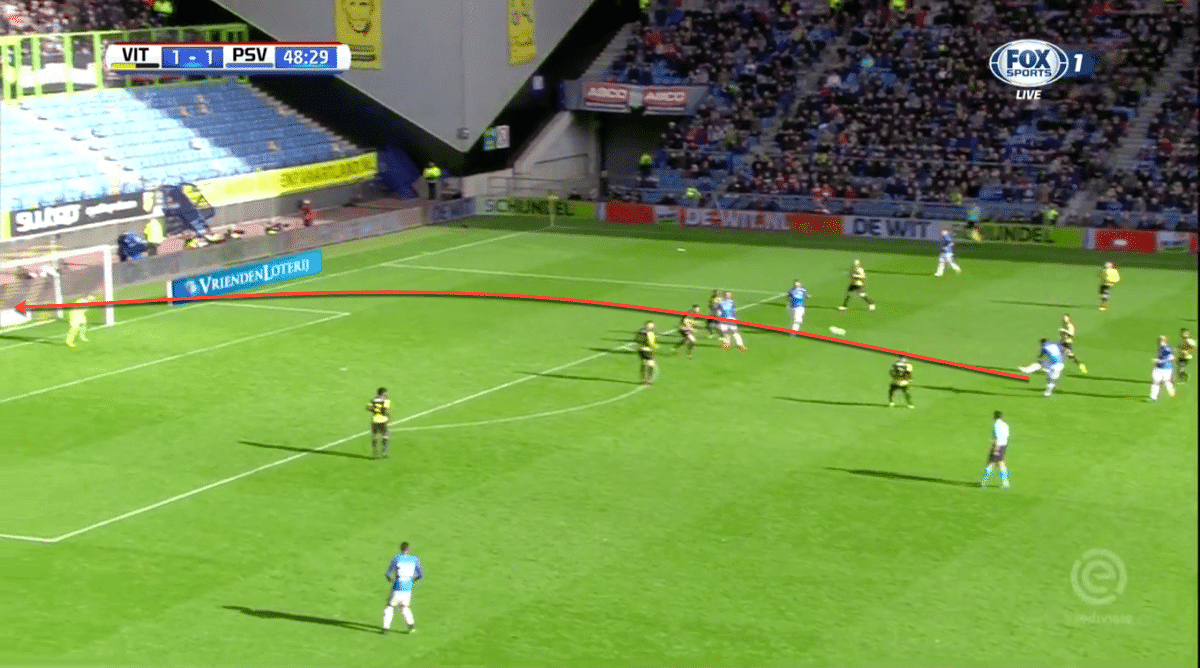 From there, he has the ability to create chances for team-mates – his 1.6 key passes per 90 is a higher average than any Brighton regular except Pascal Groß (2.5) – but he is perhaps even more dangerous when aiming for goal from distance.

As seen above, when within 25 yards of goal, with either foot, Locadia has the ability to fire rasping shots beyond the goalkeeper. The Dutch forward strikes the ball cleanly and with little backlift, and is also a set-piece threat from distance.

So far this season, Izquierdo and Knockaert have been more defensively active than Locadia, producing 2.3 and 2.5 combined tackles and interceptions per 90 respectively to the ex-PSV star's 0.8. This isn't to suggest Locadia is incapable of carrying out defensive tasks, and it is probably more illustrative of PSV's position as the Eredivisie's strongest side, meaning they generally are less stretched defensively than 16-placed Brighton.

If, as Hughton has suggested, Locadia is to be used as a striker, however, his defensive output beats that of Glenn Murray (0.7 combined tackles and interceptions per 90), the current occupant of the No.9 role for the Seagulls.

Above all, Locadia offers something different to the options previously at Hughton's disposal. As a striker, he is more dynamic and technically skilled than the likes of Murray and Tomer Hemed, while also offering the kind of versatility that could prove invaluable.