It's the summer and that means a new instalment of the nation's favourite reality TV show has hit our screens – and we're not talking about Love Island. No, we're talking about Keeping Up With The Icardashians.

After its popular inaugural series at the start of 2019 – you might remember lead character Mauro Icardi was stripped of the captaincy before going AWOL – it's back this summer and more outrageous than ever.

However, the famously hard-to-impress tactician, according to reports at least, has no appetite for the controversial Argentine to remain at San Siro.

Icardi and wife-cum-agent Wanda Nara have launched a pretty aggressive social media campaign to ensure Interisti do not forget the 26-year-old's goal-getting ability and – as is par for the course – Wanda has taken every chance to talk up her client and husband.

“He has one-and-a-half years left on his contract and his intention is to continue at Inter for at least another year,” Wanda said in response to claims Conte wants to ditch the club's No.9.

Incoming coach Conte does not suffer fools. He famously showed his ruthless streak while in the Premier League, dismissing Diego Costa – Chelsea's top scorer in his first season at Stamford Bridge – with a text message. And, if reports are to be believed, Icardi's future is no more secure.

One option, which has been heavily reported in the febrile Italian press, is a potential swap deal with Juventus for their out-of-favour forward Paulo Dybala. The Argentine always looked like the one who would suffer when Cristiano Ronaldo moved to Turin from Real Madrid last summer, and so it has proven. 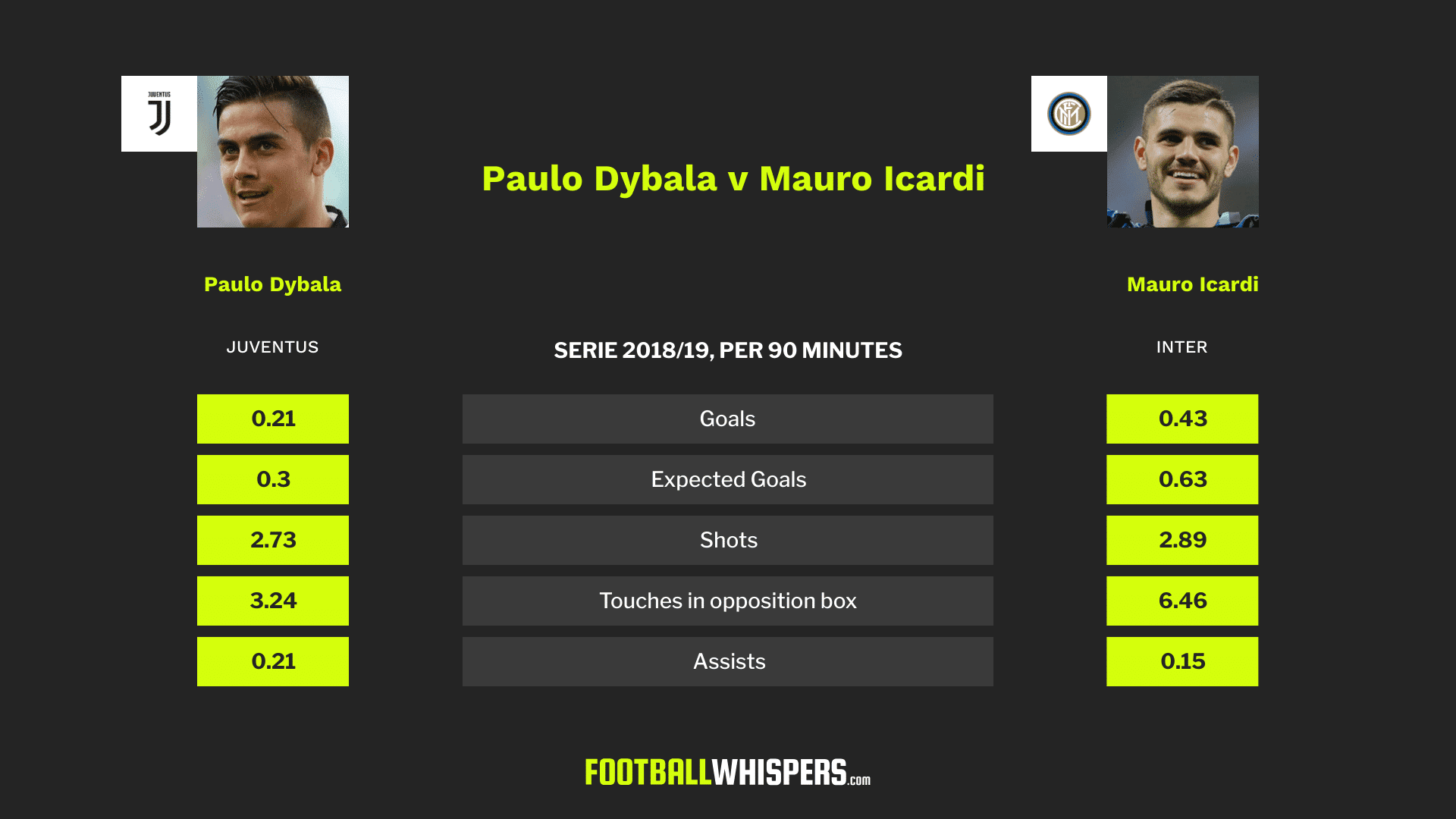 Coming off his best Serie A season to date, netting 22 times in 26 starts in 2017/18, the 25-year-old managed just five strikes in 24 games as Ronaldo trampled over him to become the Bianconeri's main man.

It was hardly a vintage season for Icardi either. Capocanonniere in 2017/18 after hitting 29 Serie A goals, the former Sampdoria man endured the worst season his Inter career with 11 strikes in total, only two of which came after the winter break.

Both are talented – if stylistically different – forwards coming off their worst seasons with their current employer. So who gets the better deal in this proposed swap?

In terms of goalscoring, it's little surprise to see Icardi has the upper-hand against Dybala. His game has always been far more about goals than his countryman's. The 22 strikes Dybala registered in 2017/18 were part of a freak year, prior to which he'd never surpassed 20 in the league. Icardi, by contrast, struck 20 in three of his first four campaigns in Milan.

Dybala has managed 38 assists in six Serie A seasons while Icardi, in 30 more appearances, has mustered eight fewer. The contrast in the style of the two can be seen clearly in their Player Persona comparison below.

Characterised by their 2018/19 statistical output, we see Dybala (yellow) bases much of his game on the creation of chances for others whereas Icardi (blue) is almost entirely about goals – something which is reflected in the fact his shots (2.89 per 90) and touches in the opposition box (6.46 per 90) both exceed Dybala's output (2.73 and 3.24 respectively).

But the former Palermo youngster played an entirely different role for Juve last season with Ronaldo moving into the central striking berth in his place, shunting the Argentine out to the right-hand side in Massimiliano Allegri's preferred 4-3-3. 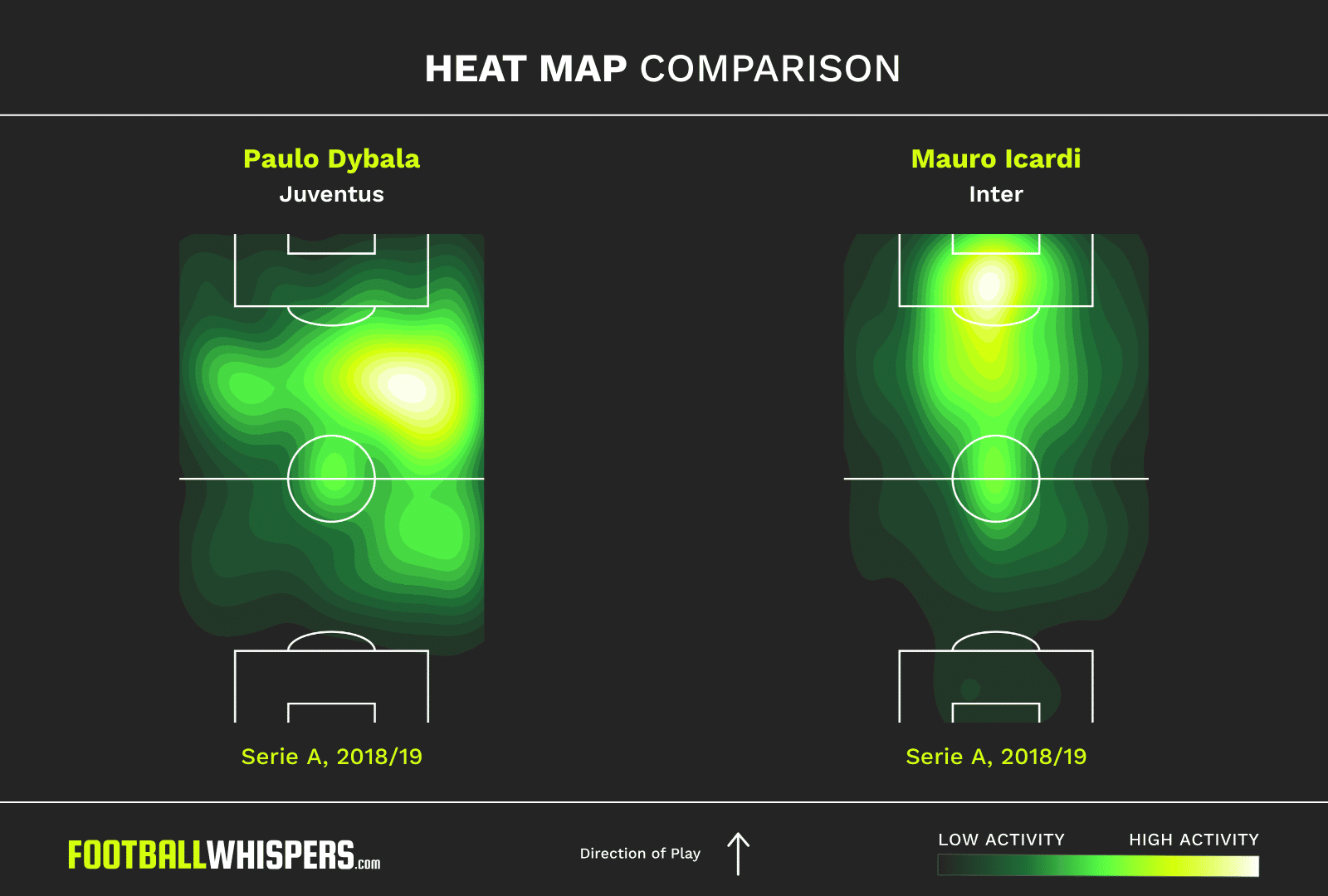 That is reflected in his heat map for which shows most of his activity taking place outside the penalty area, on the right-hand flank. Contrast that to Icardi's and it's clear you're talking about two very different players.

Dybala's credentials as a creator are further enhanced in the following metrics. He was second for completed passes per 90 among Serie A attackers last season (44.13) while he ranked sixth for through balls completed (0.16), fifth for completed dribbles (3.83) and first for touches (73.06).

If Inter are committed to moving Icardi on then getting a player of Dybala's calibre in return could be a boon, though he is unlikely to find himself reinstated to a central attacking berth.

The Nerazzurri invested a reported €22.7million in Lautaro Martínez last summer and look set on giving the 21-year-old a run in the side – though reports Romelu Lukaku could move to San Siro would scupper that. 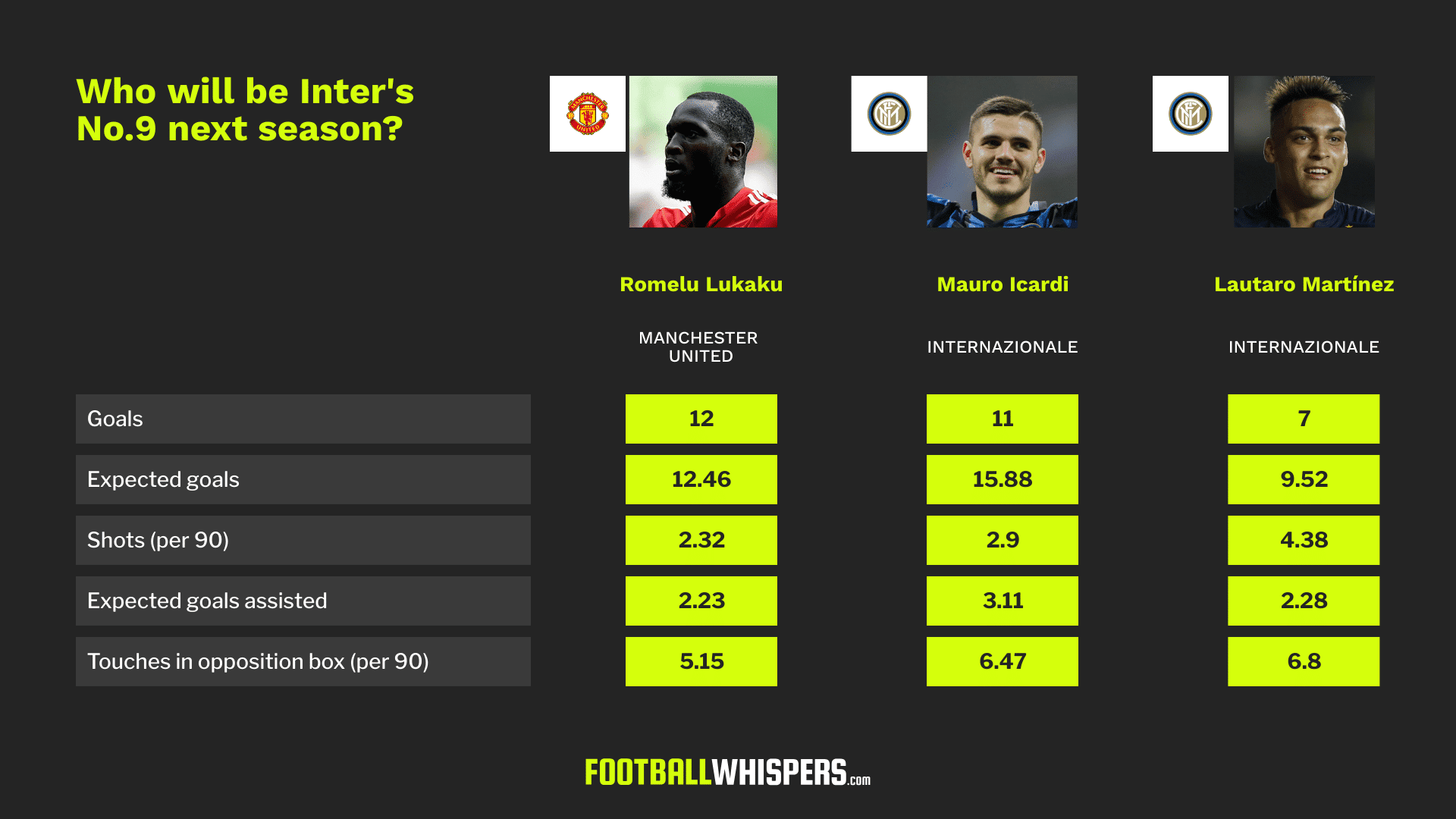 Interestingly, the Lombardy-based club actually ranked third in Serie A for expected goals last term (68.61), ahead of Juventus and behind only Napoli and surprise Champions League qualifiers Atalanta. Which suggests they actually need a prolific forward to put away the chances they create.

Over the last three seasons, Icardi's xG has totalled 50.94. Yet he scored 64 times in the league, even exceeding his post-shot xG of 50.24, suggesting his ice-cool finishing ability is adding value to his chances.

Losing that could be a huge blow for Inter, particularly if Lukaku inherits his No.9 shirt, having only narrowly out-scored his post-shot xG (52.62) with 53 Premier League strikes in the same period.

And what of Juventus? If reports in Italy are to be believed, the Old Lady will look to offload fellow attackers Douglas Costa and Mario Mandžukić this summer as they attempt to bring Paul Pogba back from his Premier League sojourn, suddenly leaving them short of wide forwards. Another No.9, even with Ronaldo turning 35 midway through next season, will only block the pathway of Moise Kean.

Even if the deal goes ahead, you sense this reality series will run for a few series yet…