England's most exciting youngsters being coveted by Europe's biggest clubs is a fairly recent phenomenon but it shows no sign of slowing.

The Bundesliga is the biggest importer of English talent and Jadon Sancho is the poster boy for this trend, playing a key role in an enthralling title race which almost saw Borussia Dortmund upset Bayern Munich while winning his first England caps last season.

Already this summer Everton defender Jonjoe Kenny has moved on loan to Schalke, following in the footsteps of Reiss Nelson (Hoffenheim) and Emile Smith Rowe (RB Leipzig), both of whom spent time on loan in Germany last season.

Italy, too, has been a proving ground for English prospects of late. Ronaldo Vieira swapped Leeds United for Sampdoria in 2018, while Stephy Mavididi has impressed at Juventus after leaving Arsenal last summer to became the first Englishman to play for the Bianconeri since David Platt in 1992.

But the former Gunner might soon have company in Turin. Reports claim Burnley youngster Dwight McNeil could be the next English player to head to Italy after a stunning breakout season with the Clarets.

After impressing at the Toulon Tournament with England's Under-20 side this summer, the 19-year-old is a Juventus transfer target, though Burnley will demand £30million for the wideman, who made 19 Premier League starts last season.

Handed his full league debut in a 2-0 home defeat to Manchester United in September, McNeil had to wait until December 30 and a 2-0 win over West Ham United, in which he secored his first professional goal, for his second.

From there he was involved in 20 consecutive games for Sean Dyche's side and never looked back, taking his chance and then some.

Speaking to the Burnley Express in April, Dyche said of his young starlet: “I like his assuredness; he's quiet, he's calm, but there's a toughness in there, particularly to have the ball.

“That's something that can come and go with players, but he's certainly got that desire to grip a game with the ball: ‘Give me the ball, I want to do something'.

“That's a powerful thing, particularly in a young player, because sometimes that's hard, but he will have the ball under any circumstances. He wants the ball, to try and produce something.”

Asked to put a valuation on McNeil, Dyche was hesitant to do so, saying: “It's a strange one, regarding his worth; I look at some of the figures bandied about for some of these young players and I don't know what you put on him.

“His worth to the team I'm more interested in, and that's the way he's delivering performances.”

The question is whether McNeil is ready for a big move away from Burnley. The teenager has already had a taste of big-club experience, starting out at Manchester United before making the short hop to Turf Moor in 2014. It was a decision which has served the Rochdale native well and it's hard to envisage him having made the progress he has while on United's books.

It's tricky to draw too much of a conclusion on McNeil at this stage given he has made just 29 senior appearances for Burnley, scoring three times. However, we can get a rough idea of his qualities from his statistics. 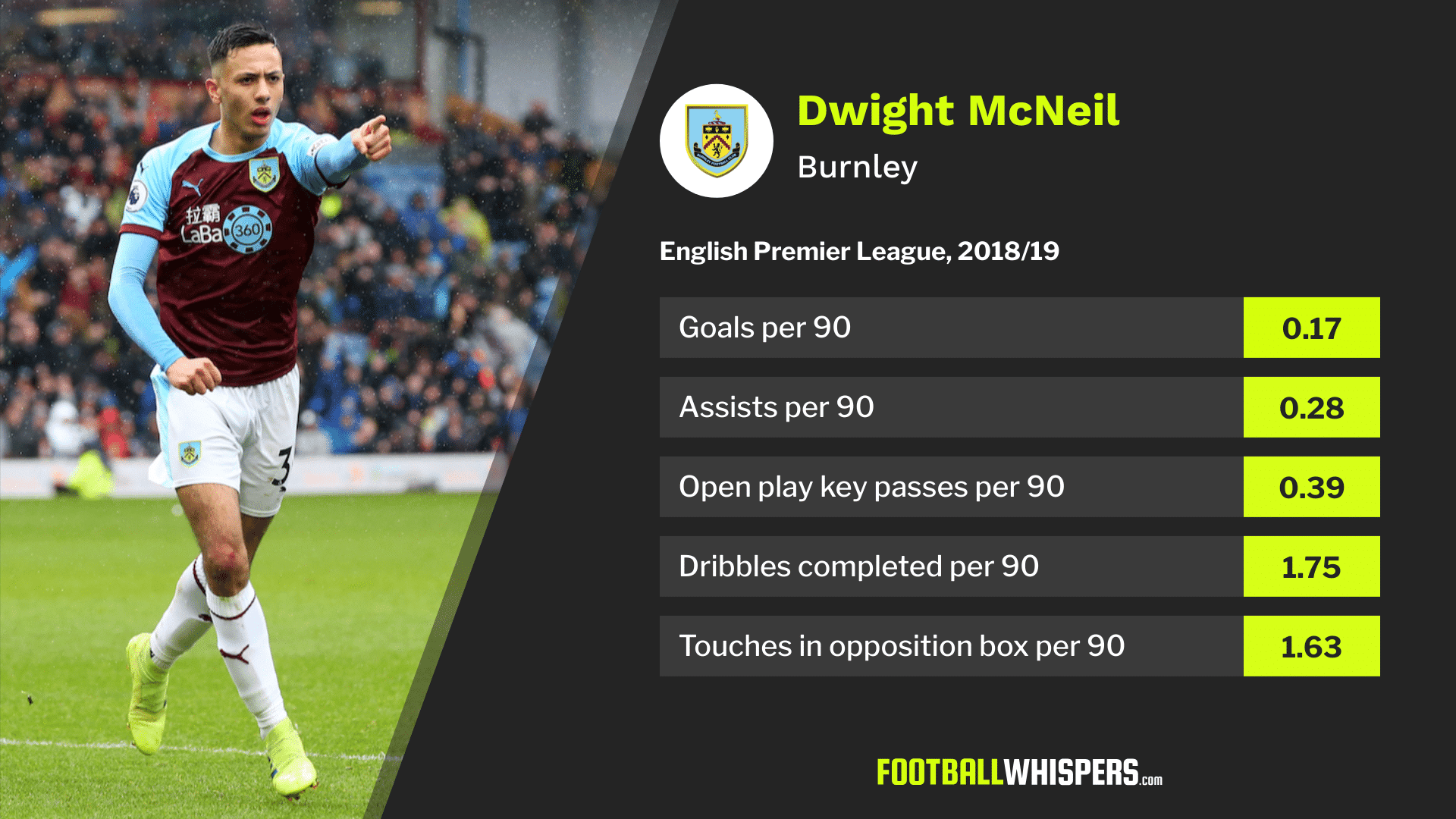 An old-fashioned winger who likes to take defenders one-v-one, get to the line and deliver, it's little surprise McNeil ranked first among Premier League forwards for completed crosses last season with 1.85 per 90. It's also unsurprising to discover he's 15th for completed dribbles (1.74 per 90) and 18th for attempted dribbles (3.09 per 90).

What might come as more of a surprise, however, is his sterling work without the ball. McNeil was fourth among forwards in England's top flight for attempted tackles (2.14 per 90) last season, fifth for completed tackles (1.29 per 90) and eighth for interceptions (0.78 per 90).

That is indicative of the sergeant major-style leadership of Clarets boss Dyche who puts teamwork, discipline and organisation above almost all other traits. Equally, it is a testament to McNeil that he not only adapted to what his manager wanted but mastered it so quickly and at such a young age. It suggests flexibility which could be imperative if a move to the continent does beckon this summer – or in the future.

In terms of his goal contribution, McNeil ranks fairly well given he played in just shy of 1,600 Premier League minutes last term. He's 11th for assists per 90 by forwards (0.28) with three from open play and two from set pieces.

In terms of key passes from set plays, he created 0.78 per 90 last term, putting him second in the top flight. His three goals came at a rate of 0.16 per 90, nothing outstanding but ahead of his expected goals per 90 score of 0.12. 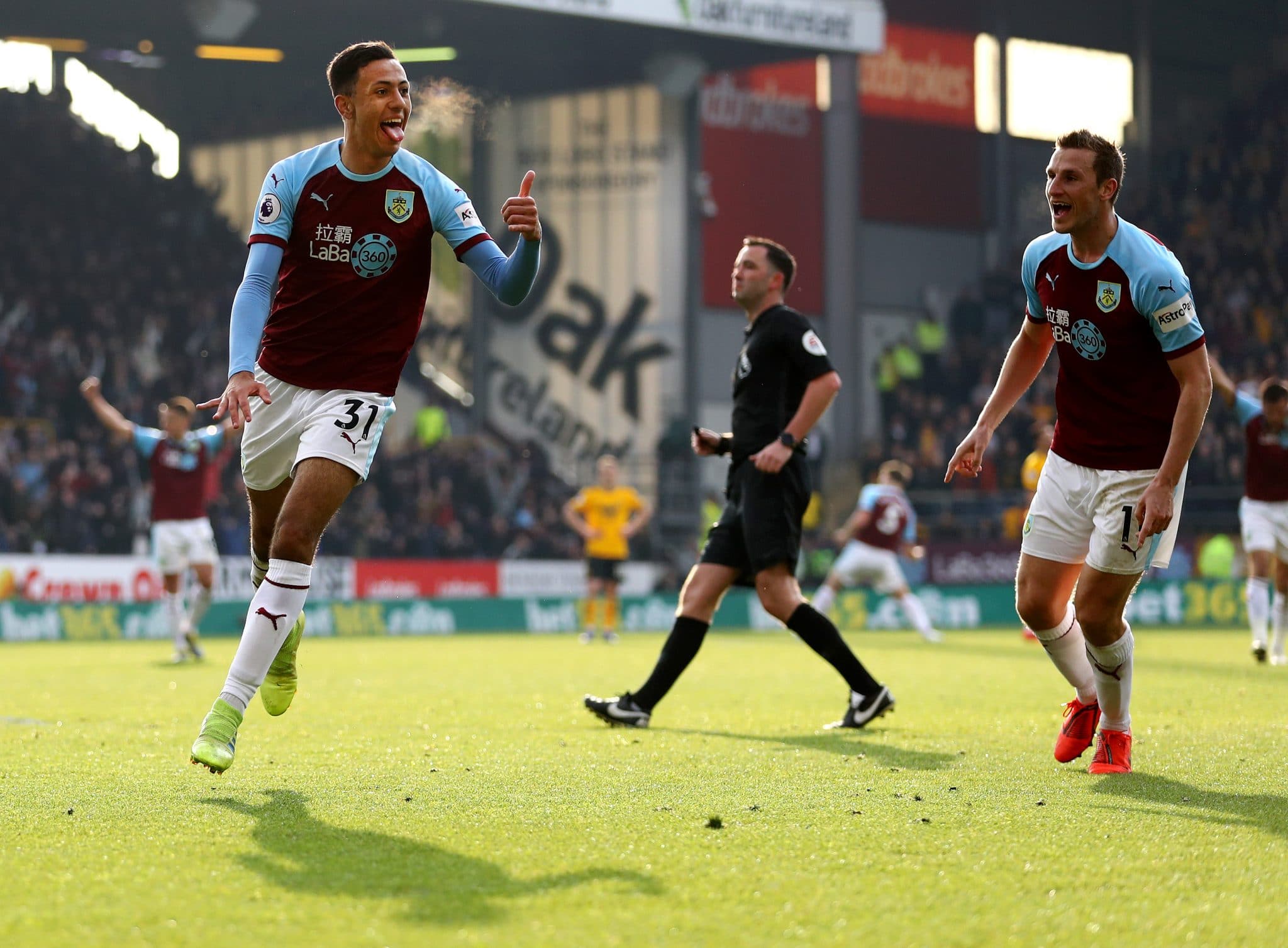 Those aren't numbers which define McNeil as a potential world beater but, at this stage, any club interested in the 6ft winger is buying potential. Even if the quoted £30million is excessive, any buyer would do well to get change from £20million.

The challenge now will be whether he can build on the standards he set during 2018/19. McNeil will go into the new season a marked man and expectations placed upon him will be elevated. Defenders will be wary of what he can do and Clarets supporters will demand even more from the teenager.

But if he can equal or better his displays of last season, he could well join the band of Brits abroad.