Less than 24 hours after Everton's Dutch midfielder Davy Klaassen struggled to convince his own supporters during his side's Europa League defeat to Lyon, his compatriot and namesake was enjoying a much better time of it.

The 26-year-old, signed in the summer from PSV Eindhoven for £10million, enjoyed probably his most satisfying match in a Brighton shirt, impressing in the centre alongside Dale Stephens as the Seagulls recorded their first Premier League away win in impressively emphatic fashion.

Pröpper played his part, too, finding José Izquierdo on the left wing which led to the Colombian scoring Brighton's second. The Netherlands international was a solid presence in the middle of the pitch throughout the night, winning four duels, making four clearances and four interceptions. He was also an efficient user of the ball, completing 84 per cent of his passes.

For Brighton fans, it was encouraging to see Pröpper get another solid 90 minutes under his belt. His Premier League initiation was a baptism of fire against Pep Guardiola's Manchester City when Brighton lost 2-0 and managed just 22 per cent possession.

However, that has fortunately not been a precursor to a disappointing maiden season in English football. Unlike his former PSV teammate and longtime close friend Marco van Ginkel, Pröpper has adapted impressively to this division.

Van Ginkel has managed just four appearances in as many years for Chelsea since joining them from Vitesse Arnhem in 2013. The 24-year-old has just started his third loan spell at PSV and, although he still has time on his side, it's highly unlikely that he will return and break into Antonio Conte's first-team.

Pröpper is a different story, though. A technically proficient playmaker with an eye for goal, he was unable to earn a lucrative move abroad early in his career like van Ginkel. However, van Ginkel's move to Stamford Bridge opened a door for him at Vitesse and, after impressing there, he was signed by PSV in 2015 and became an integral part of their Eredivisie-winning side under Phillip Cocu.

Gaining plenty of experience in his homeland made him a rounded player and earned him call-ups to the national side. Now 26, Pröpper looks to have the quality and know-how to remain a regular fixture in this Brighton team.

Hughton has the luxury of having a clear idea of what his best starting line-up is. Matthew Ryan is the goalkeeper protected by a back four of Bruno, Shane Duffy, Lewis Dunk and Gaëtan Bong. In midfield, Pröpper has found success in partnering Stephens, with Anthony Knockaert and Izquierdo out wide, with Pascal Gross supporting either Tomer Hemed or Murray up front.

And Brighton have started the season promisingly, three wins and two draws in nine games lifting them to 12th place, and Hughton will be quietly confident of accruing more points in the coming weeks with home clashes against Southampton and Stoke City either side of a trip to Swansea City.

IMPRESSING IN A DEEPER ROLE

Things are different for Pröpper at the Amex Stadium compared to PSV. For Hughton, he has been forced to sacrifice some of his creative tendencies in a lot of the games in which Brighton haven't had much possession. Instead, he and Stephens have been used as a two-man shield in front of the defence. As you can see below, Pröpper is extremely deep when Brighton don't have the ball.

Below, he is protecting the space in between the halfway line and the edge of the penalty area. While Stephens is sticking to Michail Antonio, Pröpper is acting almost like an anchor behind his midfield partner. 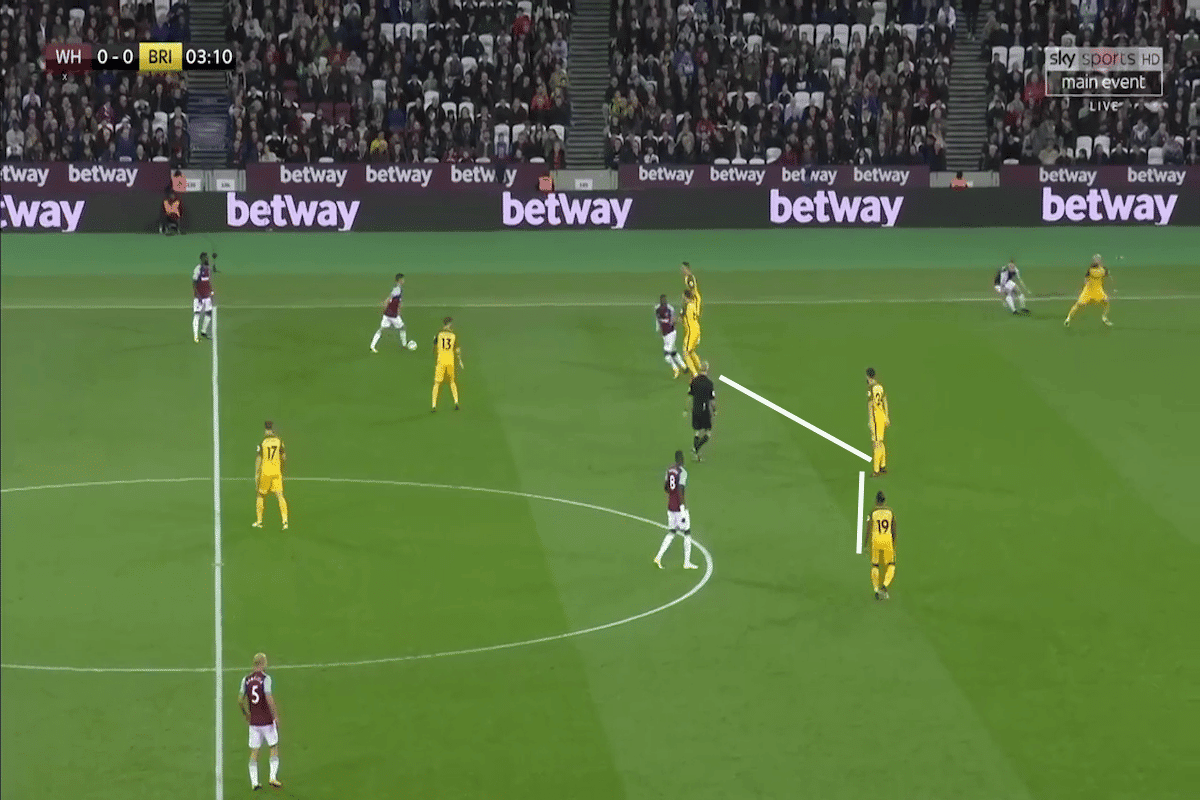 It isn't Pröpper's favourite role to play. He is best used higher up the pitch where he has a licence to unlock defence with through balls or by making late darting runs into the penalty area. That much was evident during the Netherlands' recent World Cup qualifier win against Belarus. Pröpper opened the scoring in that match, charging into the box and getting into a position to pounce on Arjen Robben's pass.

He also scored twice at home against Bulgaria, relishing a more advanced role alongside Robben and Liverpool transfer target Quincy Promes behind Vincent Janssen. In the two graphics below, you can see how advanced Pröpper was allowed to be during those two Netherlands games. 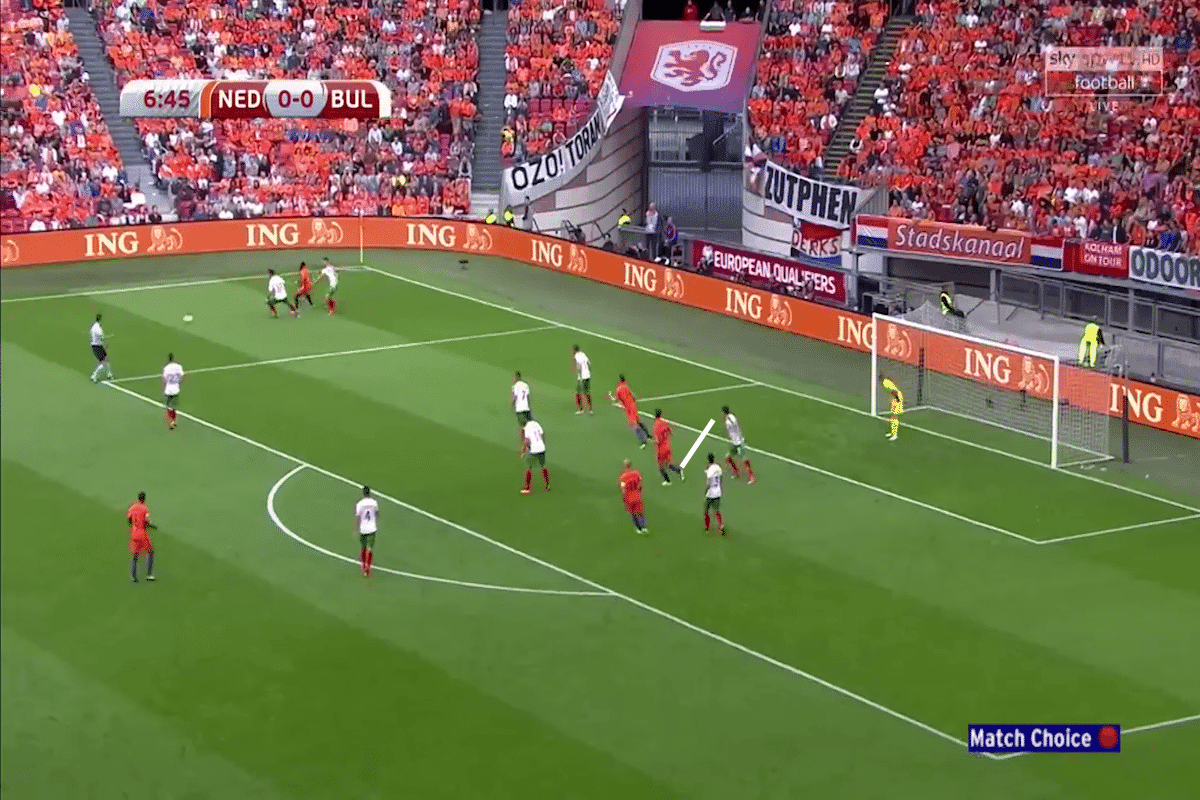 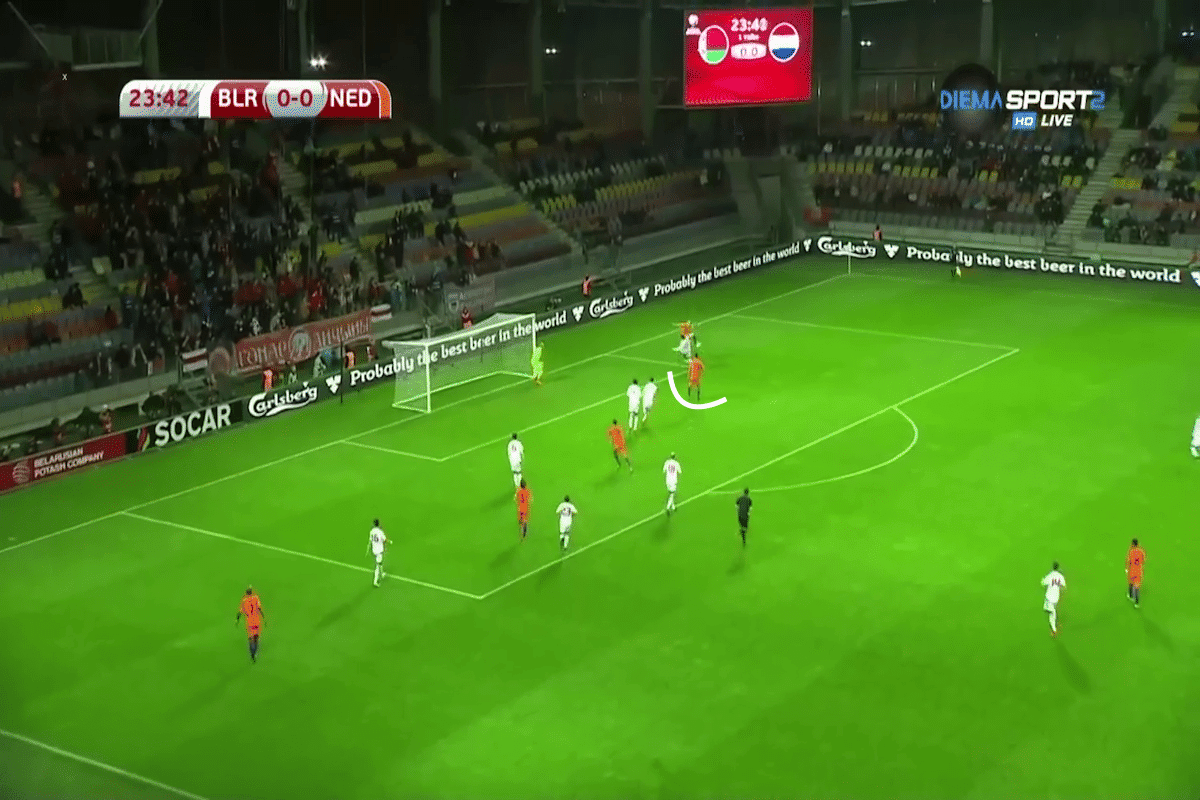 While he proved his goalscoring threat in recent outings for his country, Pröpper has accepted a much deeper role at Brighton, understanding that, as a newly-promoted side, there is little future in approaching games with a gung-ho approach. Hughton is more pragmatic than that and, sitting 12th, not many can argue with his philosophy so far.

Pröpper has played every minute of Premier League action so far and is certainly enjoying his first season in England a lot more than Klaassen, who has become a scapegoat for the miserable Everton form that has seen Ronald Koeman lose his job.

While Koeman will have a legitimate reason to feel aggrieved by Klaassen's disappointing displays, Hughton is pleased with how Pröpper has slotted into his plans at Brighton. He may not be featuring prominently in attacks as much as when he was at PSV, but he remains an important player for the Seagulls.

“Davy has made a big impact,” Hughton said earlier this month via the Bournemouth Echo.

“He had a tough introduction. He wasn’t a player we bought early, so we didn’t have him for pre-season games, and his first game was against Manchester City when you know you are going to be very much up against it.

“From that game, he’s developed really well as a player that can play in two or three positions in central midfield.”

There may come a time when Hughton requires Pröpper's services further up the pitch. The midfielder will be more than ready to oblige, with 16 goals and 13 assists in his final two seasons in the Eredivisie attesting to his efficacy in attacking areas.

Until then, Pröpper is just glad to be starting every game and seems perfectly content with the solid partnership he has forged alongside Stephens at the heart of Brighton's midfield.